Mark: Hi, it's Mark from Top Local. I'm here with Bernie Pawlik, Pawlik Automotive in Vancouver. Vancouver's best auto service experience Vancouver, BC, Canada, and of course, 23 time winners of best auto repair in Vancouver as voted by their customers not making that up. 23 times. Bernie we're talking cars. How are you doing?

Mark: So today's victim is an old one, a 1992 VW Transporter that had a bit of a ring gear problem. What was going on with this vehicle?

Bernie: Yeah, so this vehicle came to our shop. The owner had a complaint. The starter would wouldn't engage. It would just make a grinding sound when he went to start it. And he replaced the starter. It's a bit of a do it yourselfer, he'd replaced a starter many times. And basically he'd found the ring gear was worn out.

Mark: So what testing and inspections did you do? How did this show up?

Bernie: The vehicle was towed to our shop. So you know, and as I said, the owner had done a lot of his own work on it. He said, look the ring gear is worn out. So we put it up on a hoist and just visually verified that in fact, the teeth and the ring gear were worn out and it needed to be replaced. So pretty simple on that end.

Mark: So, how did the starter and ringer work together?

Bernie: Well basically the ring gear is a very large, it's a ring gear very large diameter, generally a foot or two in diameter, depending on the size of the engine, well  two feet is maybe on a large diesel, but you know, usually a foot, foot and a half in diameter, big ring that bolts onto the back of the engine. Sometimes it's part of the torque converter for the transmission or the flywheel. And the starter motor has a very small little gear that engages into that ring gear.

So when you turn the key to start, the starter motor, there's a plunger that moves a small gear into the ring gear and the starter motor turns rotates the engine. So that's basically how the whole system works. And then of course, when you let the key back off, it all retracts and the engine is started and running, hopefully everything works like it normally does. Well, that's kind of how it works.

Now of course you know, as this gear meshes in and out all the time, eventually there's a little tiny bit aware. And sometimes over the years, this is a 92, so it's getting pretty old. There's been a lot of years of the gear meshing together and it basically wears the teeth out.

Mark: So, I guess sometimes these are incorporated into, they're not separate. Is it a separate piece on the VW?

Bernie: It is now. Yeah. On this one is actually part of the torque converter. So the transmission has to come out to replace it. It actually has to come out on pretty well every vehicle. I can think of one vehicle where you don't, but we won't talk about that right now, but 99.9% of any vehicle on the road if your ringer goes bad. Either the engine or transmission has to be removed to replace it. So, and in this case, the ring gear is incorporated in the torque converter.

So let's look at some pictures. 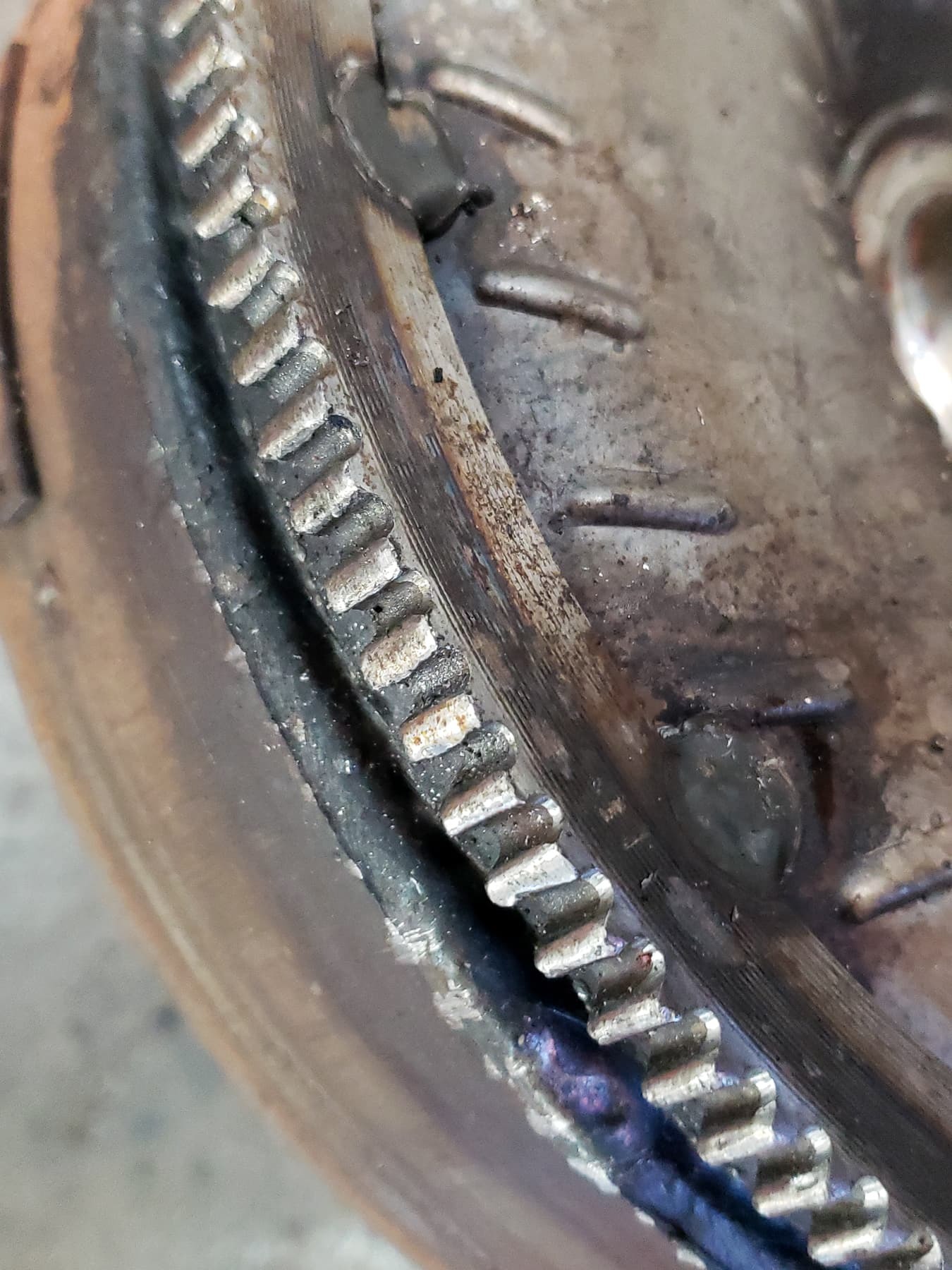 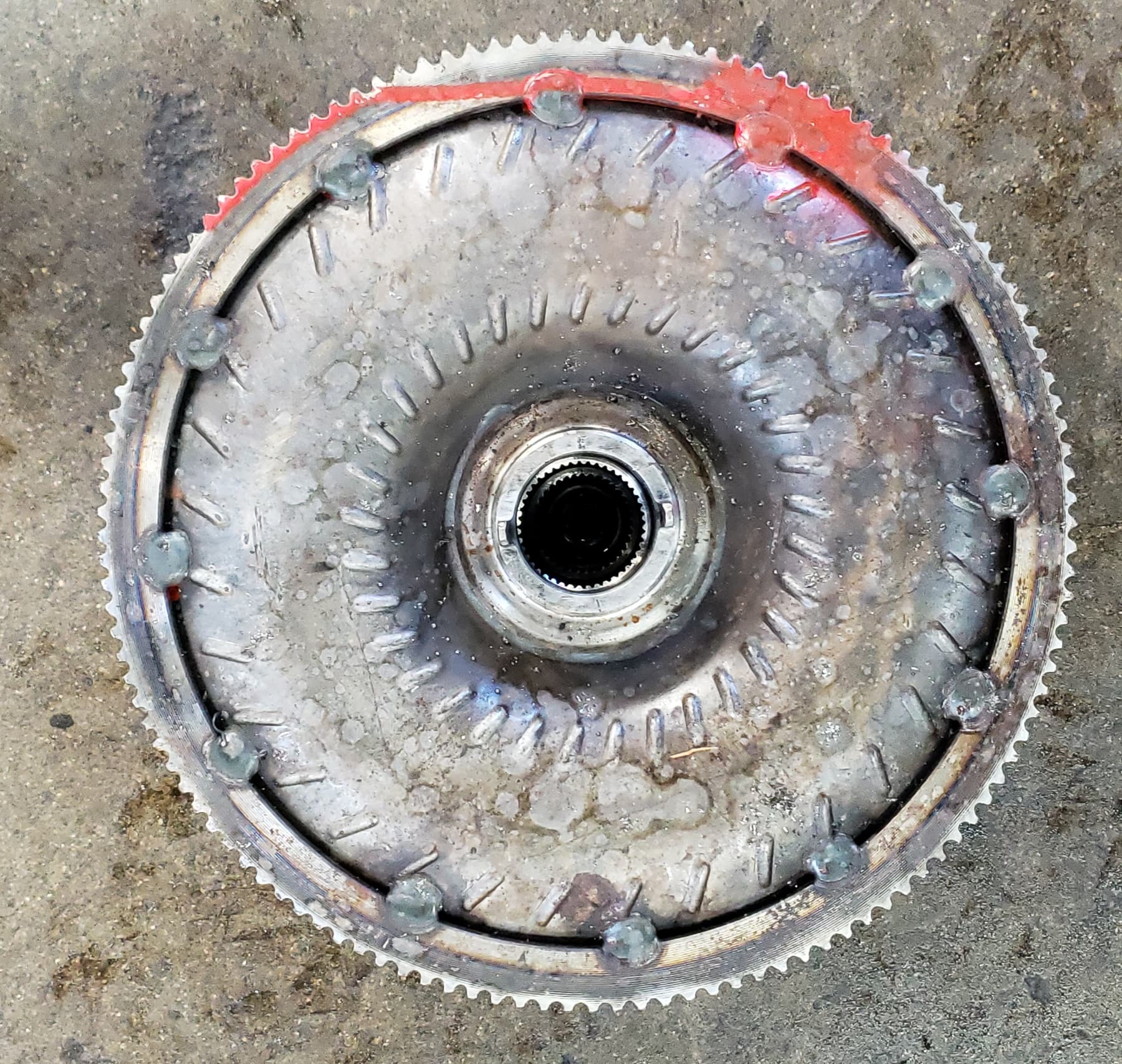 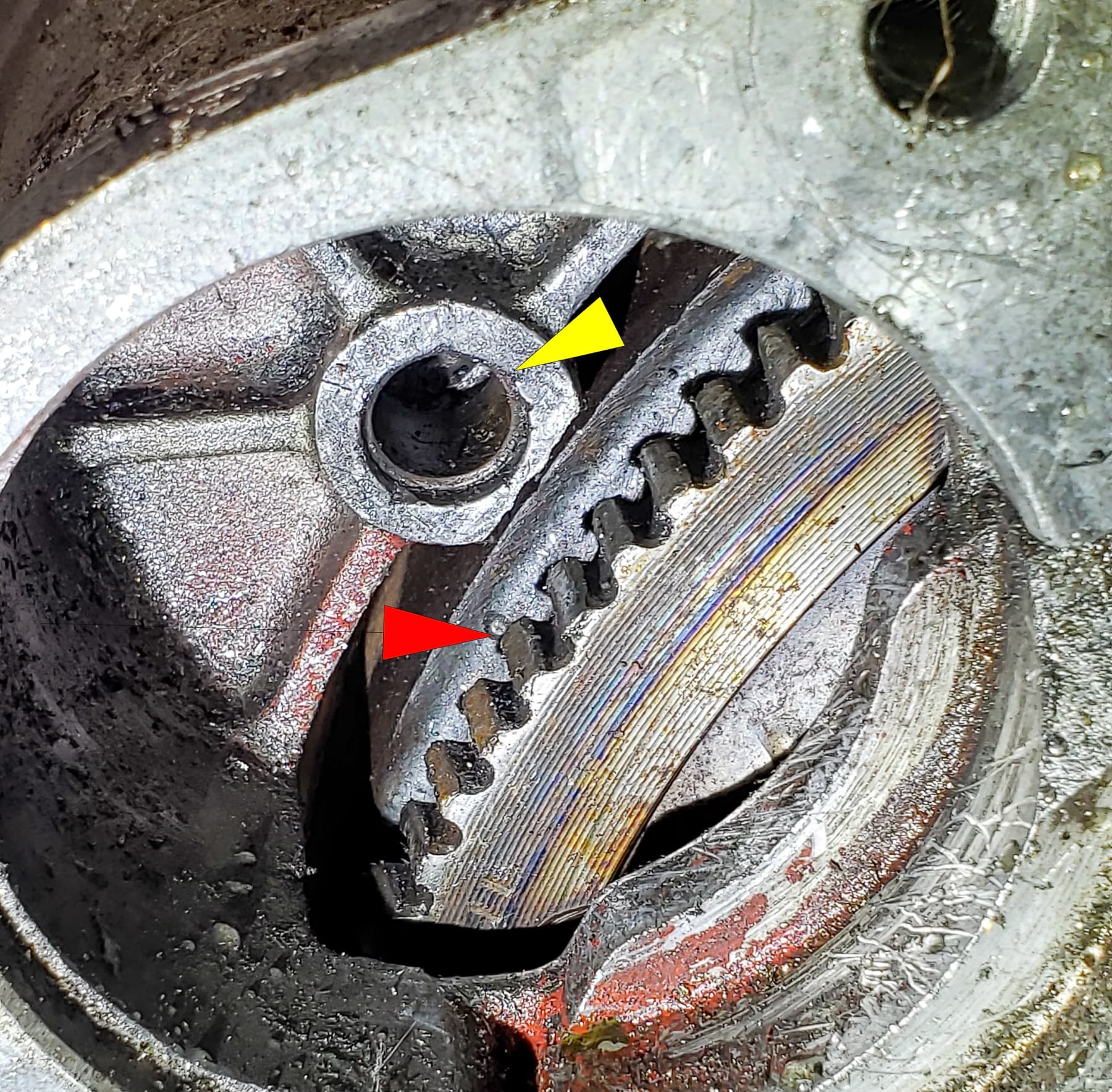 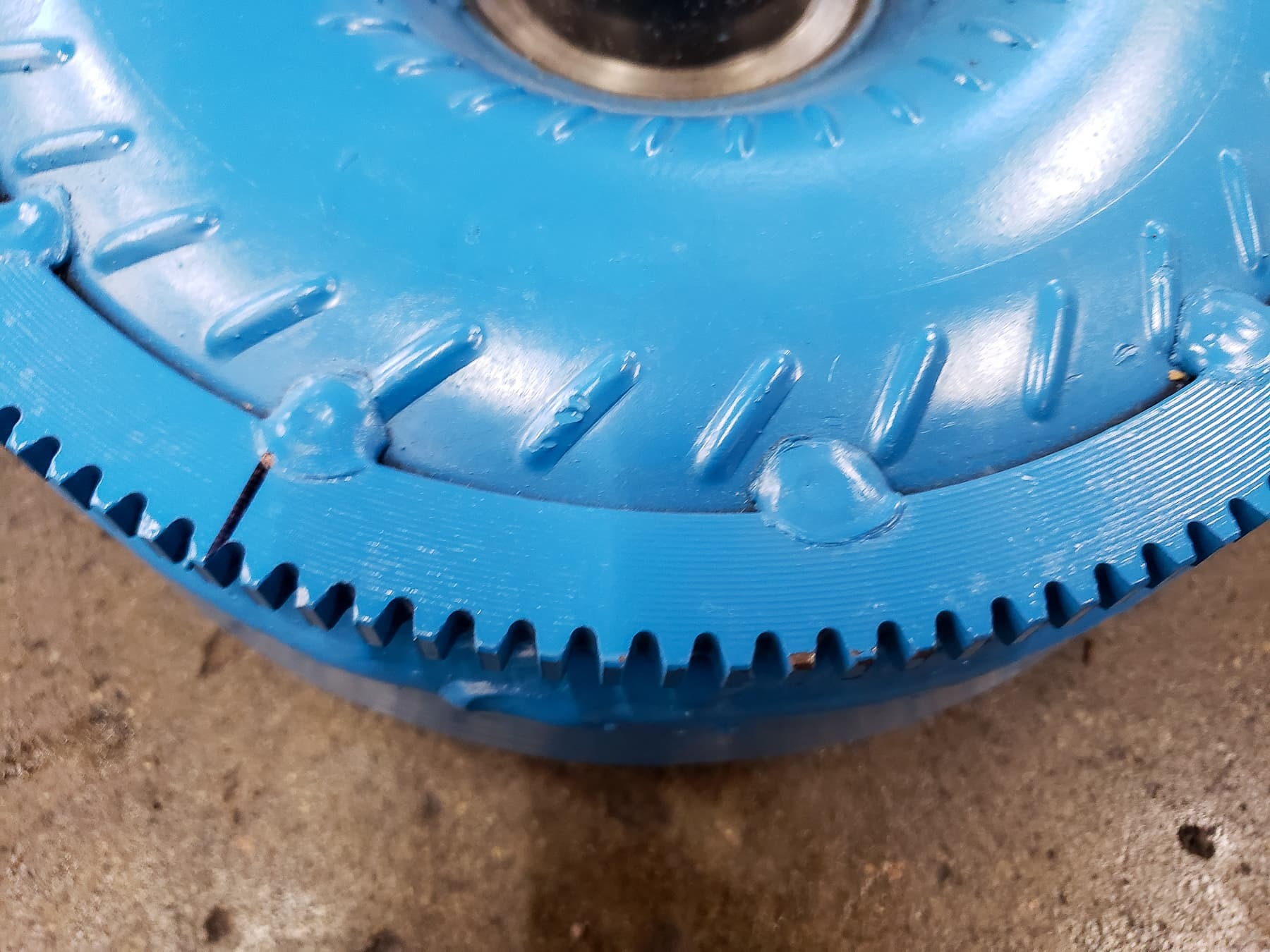 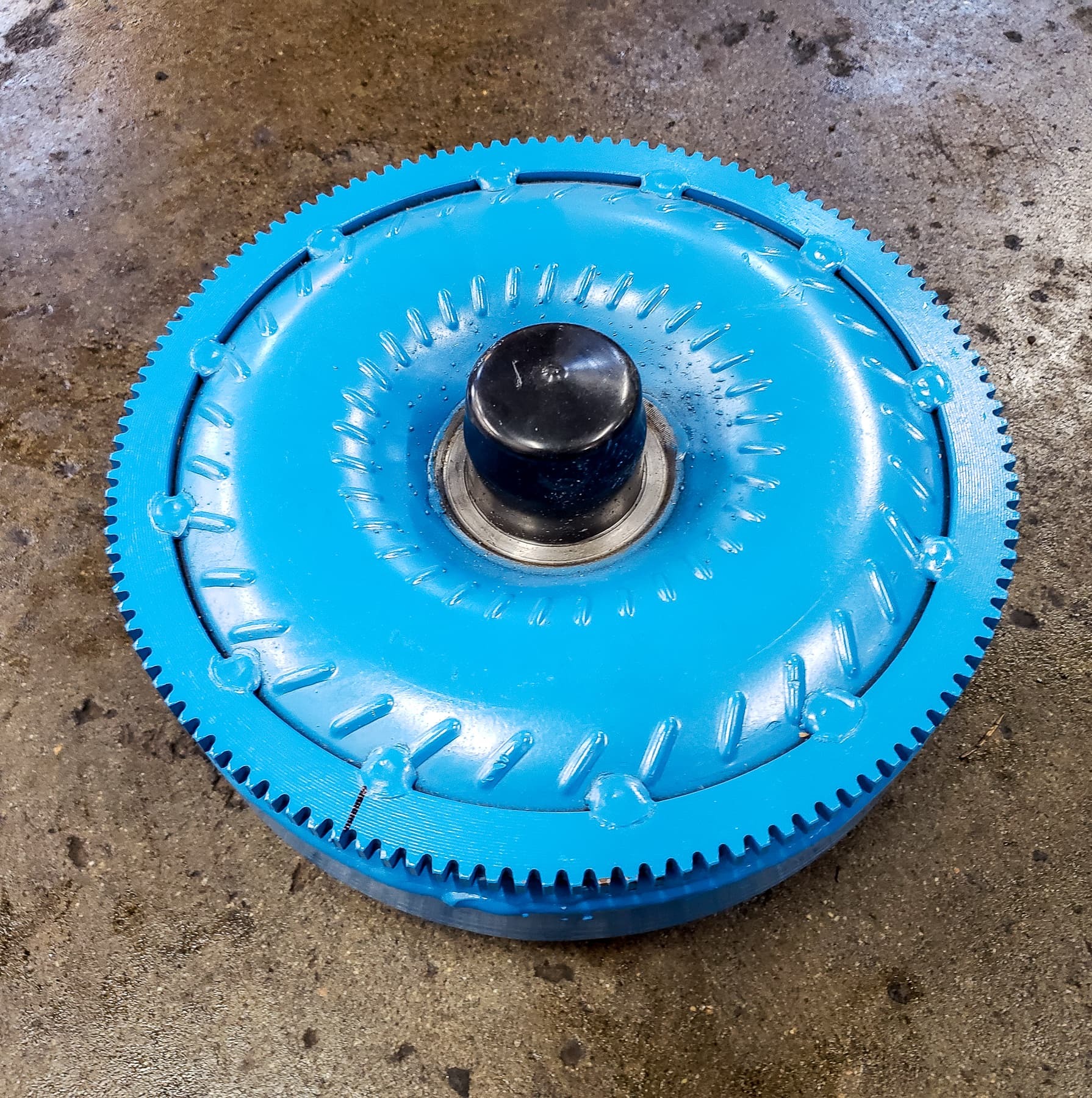 So there is our worn out ring gear. Yeah. If you can see these teeth, we'll be looking at some good ones in awhile. You can see these teeth along here, like someone's hammered them flat compared to these nice looking teeth down here. So the interesting thing with ring gear wears, it doesn't wear the whole gear.

It only usually wears one or two spots because when an engine stops, it almost always stops in the same spot. You know, one of two spots. So it's always, it seems to engage  in the same area and it'll just wear that spot out. If it stopped in a different place every time it would be kind of a different ball of wax.

Now we'll look at the new piece. You can see the teeth. Not only is it nicely painted blue, but the teeth are very much in good shape. So when they replaced this torque converter, they actually weld a new ring gear on and there's a bigger view of the torque converter. Again, you can see all the teeth look to be very tall, nothing pounded down, so works much better that way

Mark: So you're replacing the torque converter as well as the ring gear. Do they go around the same time or ...

Bernie: They're actually welded together as an assembly? So a couple of things happened with ring gears. Sometimes you get a thing it's called a flex plate, and it's basically a plate that bolts up to the crankshaft of the engine.

And if you have a standard transmission with a clutch using the ring gear is incorporated into the flywheel, which is a much more massive object than a flex plate. So it depends on what kind of transmission, but it's always either the torque converter, the flywheel or the flex plate.

Mark: So this geared situation with the two, the small gear on the starter, the big ring gear, is that the typical design do all vehicles use this kind of design of starter motor ring gear?

Bernie: Well, they do, unless it's a hybrid. And so if you have like a Toyota Prius or, you know, just use that as example, but a lot of hybrids. The motor generator unit actually will start the engine. So when it's commanded, it'll be spinning, it serves as the starter motor and the generator kind of incorporates several items into one. And so that eliminates the ring gear, the starter. There's also some GM vehicles that are it's called a mild hybrid. It's like a 48 volt system. And it would actually use a starter and alternator become they become one unit and that'll actually start the motor with it that uses a very robust drive belt system. So again, that eliminates the ring gear and starter, but any other internal combustion engine uses this system. I guess as time goes by with hybrids, it's getting less common.

So how common of a repair is this on VW Transporter vans are on any vehicle?

We do them from time to time. I mean, I can say probably we might do a couple of year and we do a lot of cars in our shops, so it's not a really common repair, but it does happen from time to time. I guess the next question. How do you know your ring gears are bad? In this case the starter wouldn't turn anymore. But usually you can tell when your ring gear is going, because when you turn your key to start, it'll make like a loud kind of clanging sound like instead of the engine actually cranking over normally. So if that's happening, your ring gear is probably, I mean, sometimes it can just be the starter drive gear that's bad, but that's usually indicating your ring gears on its way out. And actually, if you do get any noises like that, it's probably good to inspect it and change the starter right away, because you might prevent ring gear damage because starter's much cheaper than replacing the ring gear.

Mark: So how are these vans for reliability?

But you know, again, this is almost a 30 year old van now, so things are going to be happening and yeah, what can you say, they're getting old. You'll be doing repairs.

Bernie: It is. But it's funny how a lot of old VW vans are still around and I mean, they're worth a fortune now compared to what they used to be. For some reason, VW vans had a very long lifespan for some reason. Now, again, these Transporters are a little more mainstream because they're front wheel drive, but Yeah, the old, you know, a lot of them seem to last longer than your usual on the road vehicles. So we'll probably see a few of these for years to come.

Mark: How expensive of repair was this?

Bernie: At least $2,000 Canadian. I can't remember the exact thing is at least 2000 a lot. The torque inverter's not being insanely expensive, but there's a lot of labor involved to pull the transmission out. It's really shoehorned in there. Not a lot of fun to remove and re-install. So mostly, mostly labor, but some parts.

Mark: If you're looking for good, reliable service, honest service for your vehicle in Vancouver, the guys to call Pawlik Automotive. (604) 327-7112 to book your appointment, you have to call and book ahead in Vancouver, BC, Canada. We love you calling from other places, but we can't help you over the phone. It's in person. This is real-world stuff. Check out the website pawlikautomotive.com. Hundreds of videos on there. All makes models, types of repairs. We've been doing this for nine years now. And of course the YouTube channel Pawlik Auto Repair. We really appreciate you listening and watching the podcast. Leave us a review if you like what we're doing. Thanks Bernie.

Bernie: Thank you, Mark. Thanks for watching. Always fun.