Mark: So an older victim today, a 98 Subaru Forester that had a gearshift issue. What was going on with this vehicle?

Bernie: Yeah. So this vehicle came to our shop with a few concerns. One of them, and actually the gear shifter was probably not the most major concern. The gear shift handle was really floppy. So normally when you move a gear shifter, it has sort of column gates. It'll move in a sort of pattern. it was very floppy. So that was one issue, but sort of more major issue with the clutch had a slippage problem. There's also some clunking and grinding noise in the front end. So those were some of the concerns we looked at. So there's basically three items going on with the car.

Mark: So what did you find is you diagnosed these issues?

Bernie: Yeah, so we found there was an issue with the right front CV joint was worn causing the front end noise. We also found that the clutch had a pressure plate problem which we didn't find out till we actually remove the transmission. But, you know, just based on how the clutch felt there was definitely something going on. And also when we had the transmission out, we found the gear shift coupling was worn out, which was pretty obvious and noticeable.

Mark: So I'm assuming that's easier to do to replace that part once you've got the transmission out? 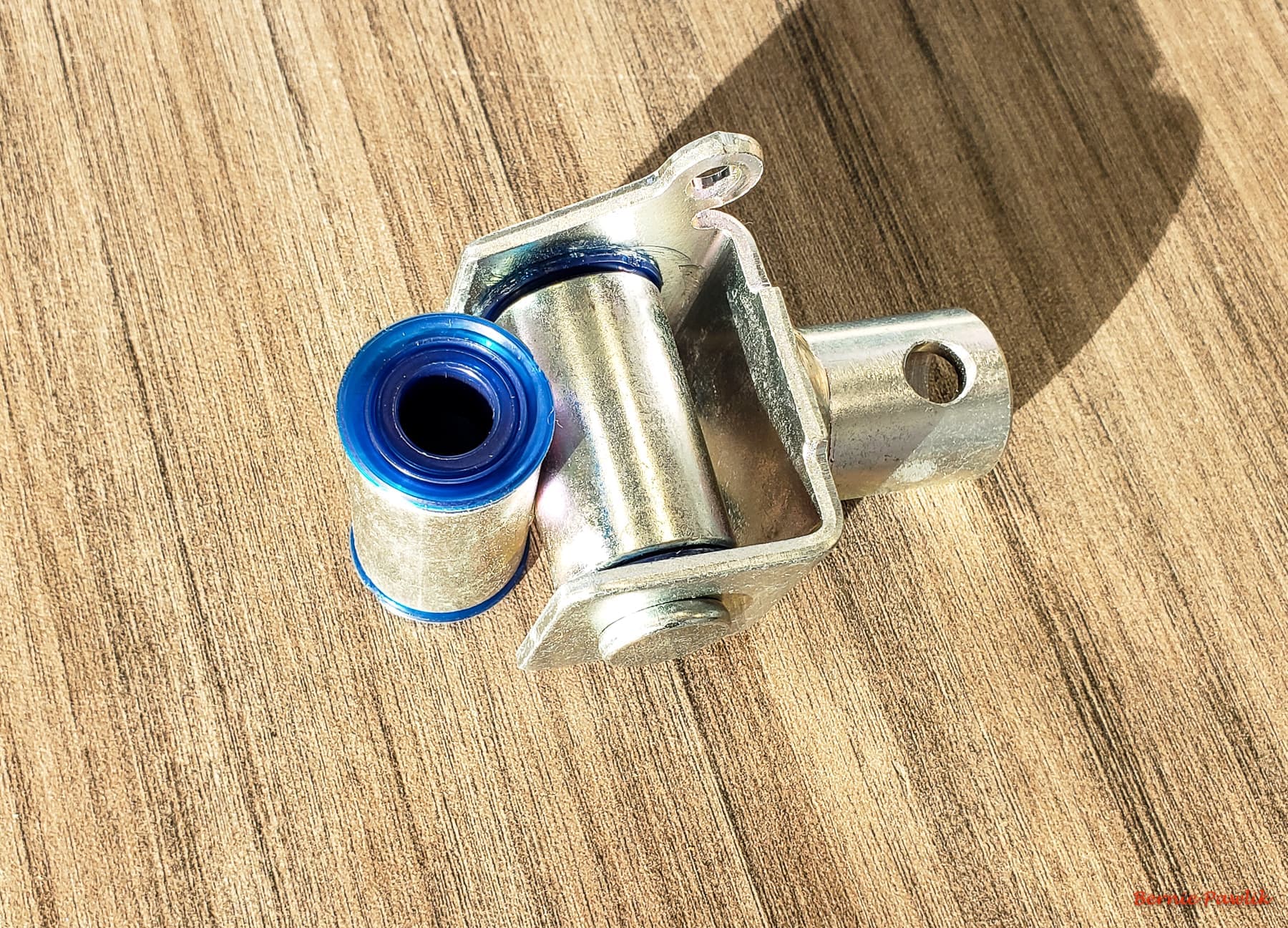 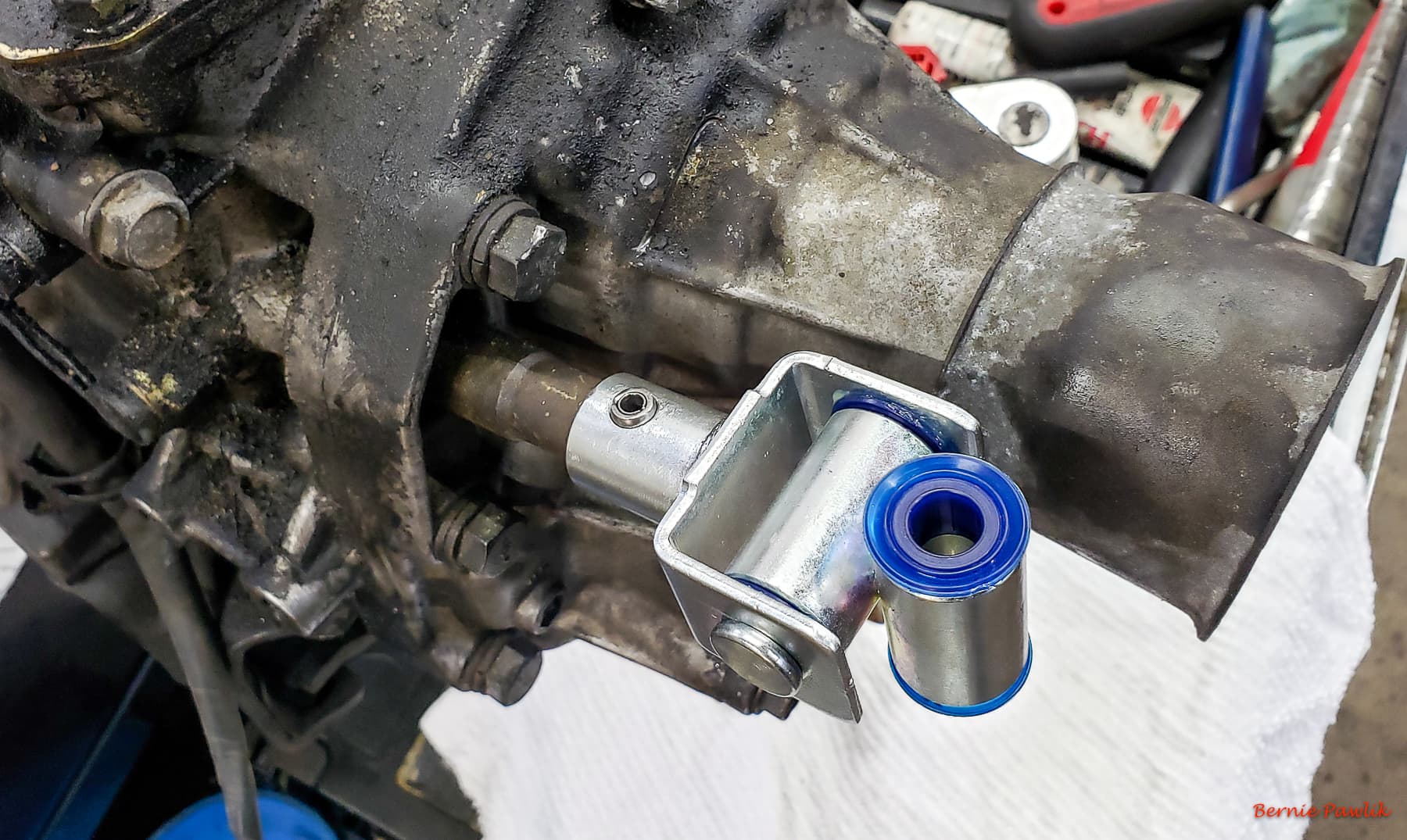 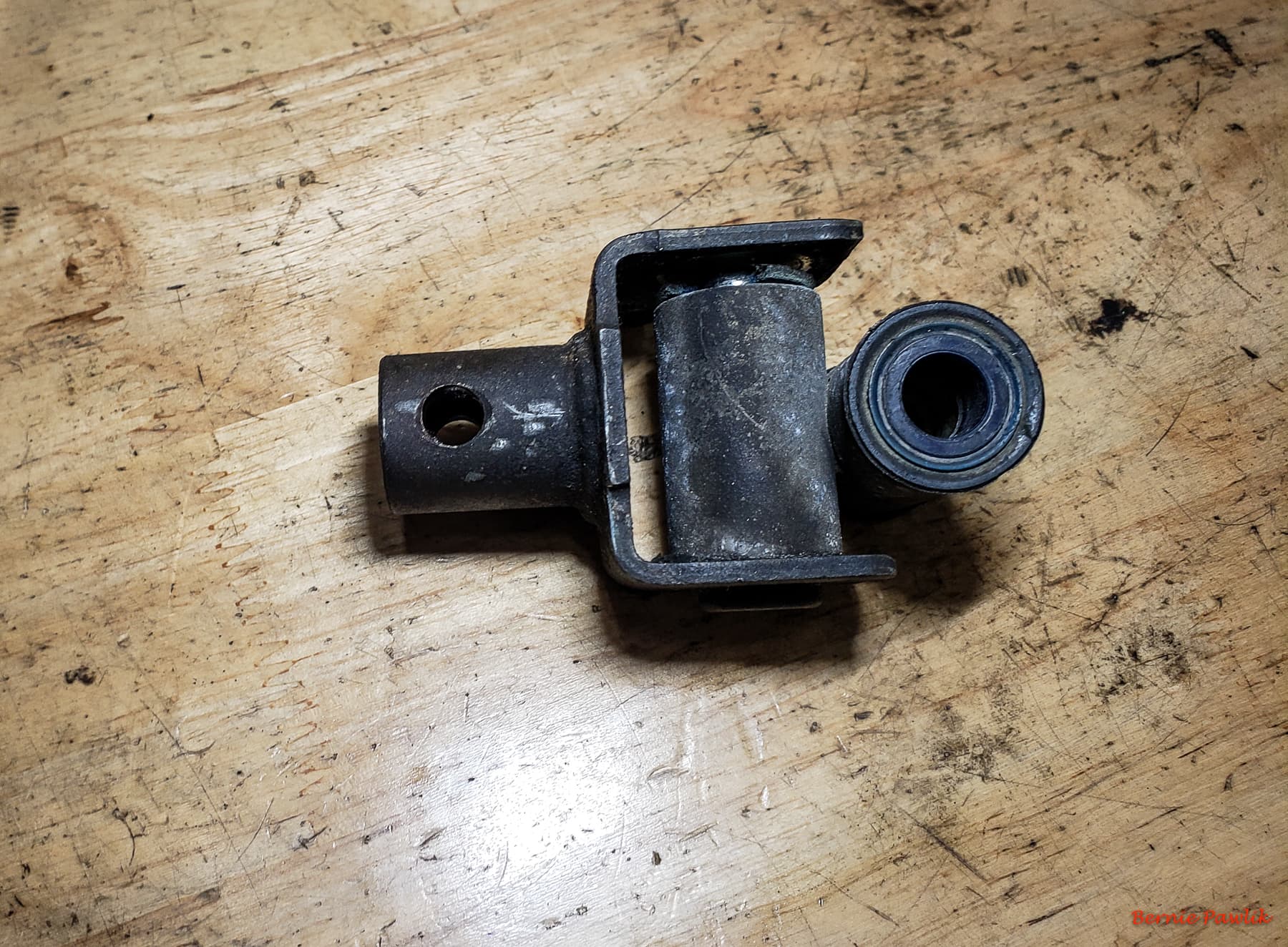 So this is the old piece. So what wears out with this thing? Basically there's rubber. This is all sort of, I don't know if the original one's black or that's just worn like this over time, but you can see here that there is no rubber between this metal part and the edge. And if I was to have this in my hand, this just flopped around like crazy. So this rubber piece is completely worn out and allowed for a lot of movement in the shifter.

Mark: So this is an older car, but is this a common world part on these cars?

Bernie: Not really. As you said, it's an older car. I mean, it's got a, what is it? 20 geez, you know, four years old now, at this point. It's almost pushing a quarter century. It's kind of surprising. I remember when these cars were new and the newest thing out there for Subaru. But yeah, I mean, it's not a common replacement part.

We do replace this coupler. It's different on different types of vehicles, but gear shift couplers do wear out. But it's usually a long-term item, you know as a car gets really old, there are more parts that will wear out over time. So this is one of those kind of parts. It's not a sort of something that's going to wear the first 10 years of life of the car.

Mark: It's going to take a few hundred thousand gear shifts to wear it out, in other words.

Bernie: Exactly. And I was kind of thinking when I was preparing this podcast, you know, there's certain certain parts when you look at a car that you're sort of, you know, three to five-year wear out items, things like brakes that need to be done. And then there's your sort of ten year wear out items, things like spark plugs and timing belts in the past. And then you start getting into once your car gets older, they're sort of 15 year, 20 year parts. And sometimes you don't even know what's going to wear out once they get older, some things will last for, if you kept the car for 50 years, they'd still work. And other, other items would be certainly replaced several times.

Bernie: Well, yeah, it is a pretty reliable car. I mean, parts for these are not too difficult to get still. You know, the owner had invested some money in this car in terms of upgrading suspension.

So he obviously liked the car and did a few things to it. I mean, the technology is not a lot different in this particular model than it is like in a ten-year newer model, you know, for a 2008, it's pretty similar. The only thing really different is the variable valve timing in the engine. So other than that, it's pretty much the same.

So, yeah, I mean, not really a bad car to keep. It really depends on your car and what you want to use it for. And the usefulness of the vehicle, again, you know, out in the sort of back roads is pretty good. And having an older car, sometimes if you're going to go out and go to the bush, you don't necessarily want a nice new car to scratch up. It's kind of better than sometimes having something old and maintaining it and keeping it good shape.

Mark: If you're looking for service for your Subaru, old or new, the guys to see are Pawlik Automotive. They service a ton of them. You can reach them on the website, pawlikautomotive.com. You can book your service right there. They'll get back to you. They'll talk it over. They'll find out what needs to be done. What's going on. Or you can call them (604) 327-7112. You have to book ahead. They're busy or just check out the website. If you've got nothing to do, you want to fall asleep, watch us. We have over a thousand videos on there, pawlikautomotive.com. All makes and models, types of repairs. 10 years of doing this. YouTube channel is the same Pawlik Auto Repair. You can laugh at us about the old ones. They're pretty funny. Many people do, join the crowd. We appreciate you watching and listening. Thanks Bernie.