We service many Honda Civics at our shop and given enough time and mileage the Exhaust Manifold and Catalytic Converter Assembly will fail.

This car features a “close coupled cat” which essentially means that the catalytic converter is right next to the manifold. These two are so close together that they are replaced as a unit. This is a common feature on most cars built since the late 1990s.

Today’s car came in with a check engine lamp on and a catalyst efficiency trouble code. After diagnosis we confirmed that the catalytic converter was weak. We also found a defective front oxygen sensor.

Fortunately the oxygen sensor must be removed from the manifold so replacing the defective sensor required no extra labour costs for our client.

When it came time to replace the exhaust manifold and catalytic converter assembly we found a large crack in the manifold. This is not an uncommon occurrence on this vehicle and is frequently accompanied by loud exhaust noises and odors in the cabin.

The Honda Civic has been around since 1972. While early generations of Civics had great fuel economy and a low price tag they were not the most durable of cars. The past couple of generations are extremely reliable, though the purchase price is no longer cheap.

For more on the Honda Civic please click on this link http://en.wikipedia.org/wiki/Honda_civic

For more on catalytic converters and how they function view this http://en.wikipedia.org/wiki/Catalytic_converter 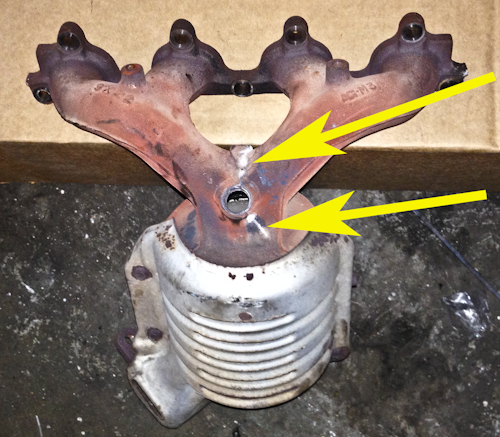 Exhaust Manifold and Catalytic Converter Assembly. The yellow arrows point to the crack. The front oxygen sensor screws into the threaded hole.