Mark: So a Volvo S80, a 2000 model. So a little bit of a older in the tooth kind of vehicle that had an electronic throttle that had to be replaced. What was going on with this vehicle?

Bernie: Yeah, so the car came to our shop. The owner had said that the vehicle would accelerate, basically the throttle, well, at least that's what it felt like, the throttle wasn't moving. He'd actually taken it to another shop. They suggested that the electronic throttle module needed to be replaced. He wanted a second opinion and wanted us to look at it. So we did it.

Mark: And so okay you had a look at it, what did you find?

Bernie: So of course we basically proceeded to do some diagnostic tests. I want to start with some pictures and then just explain the diagnosis. Of course, the first thing we do is something like that is verified a concern. I started the vehicle, I looked at it myself, started the vehicle. And we got in the vehicle and verified the concern. It started ran fine, but when you, as soon as you accelerate, the engine wouldn't rev up at all. Hooked up our scan tool and found a nice variety of codes here. 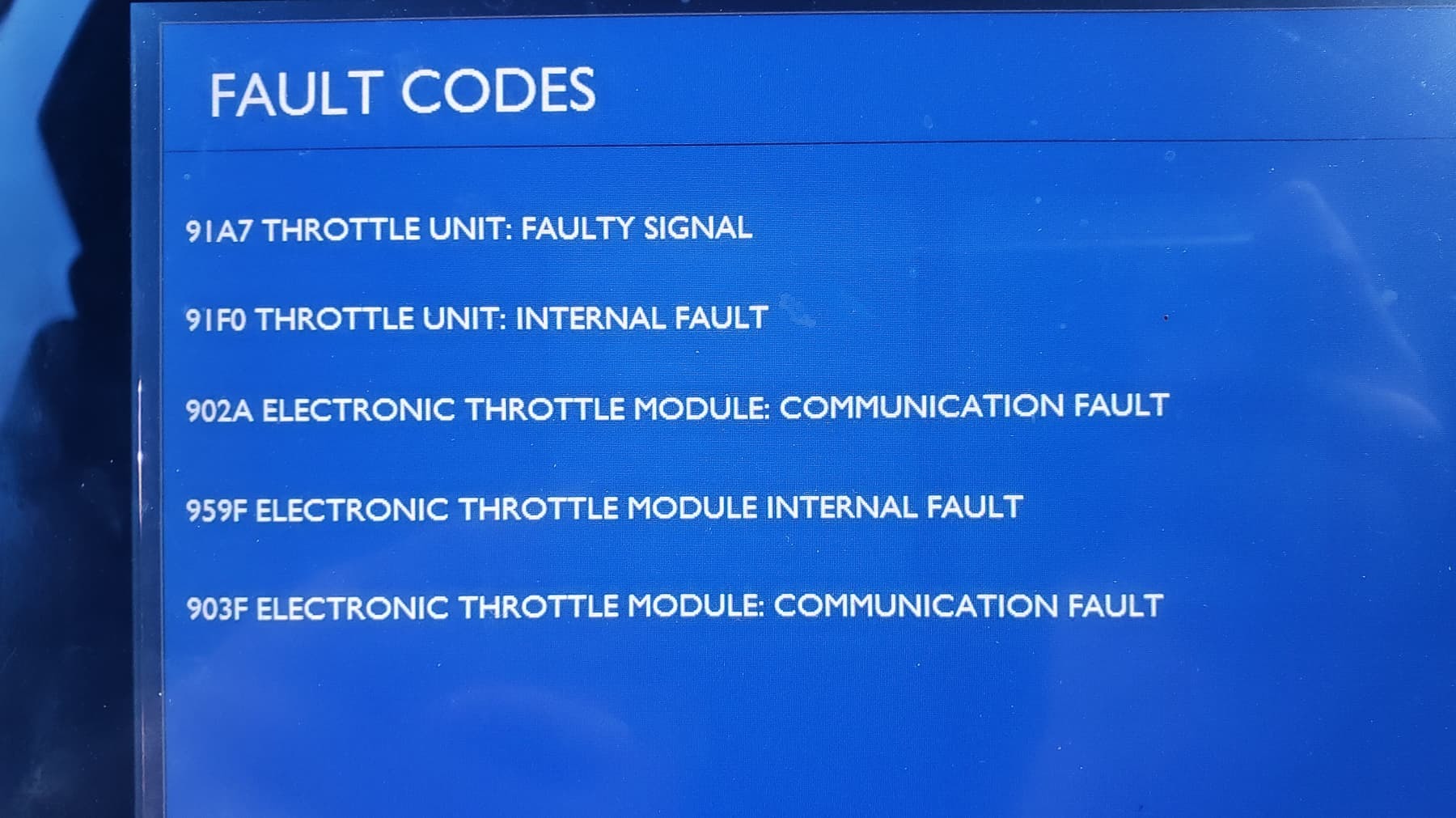 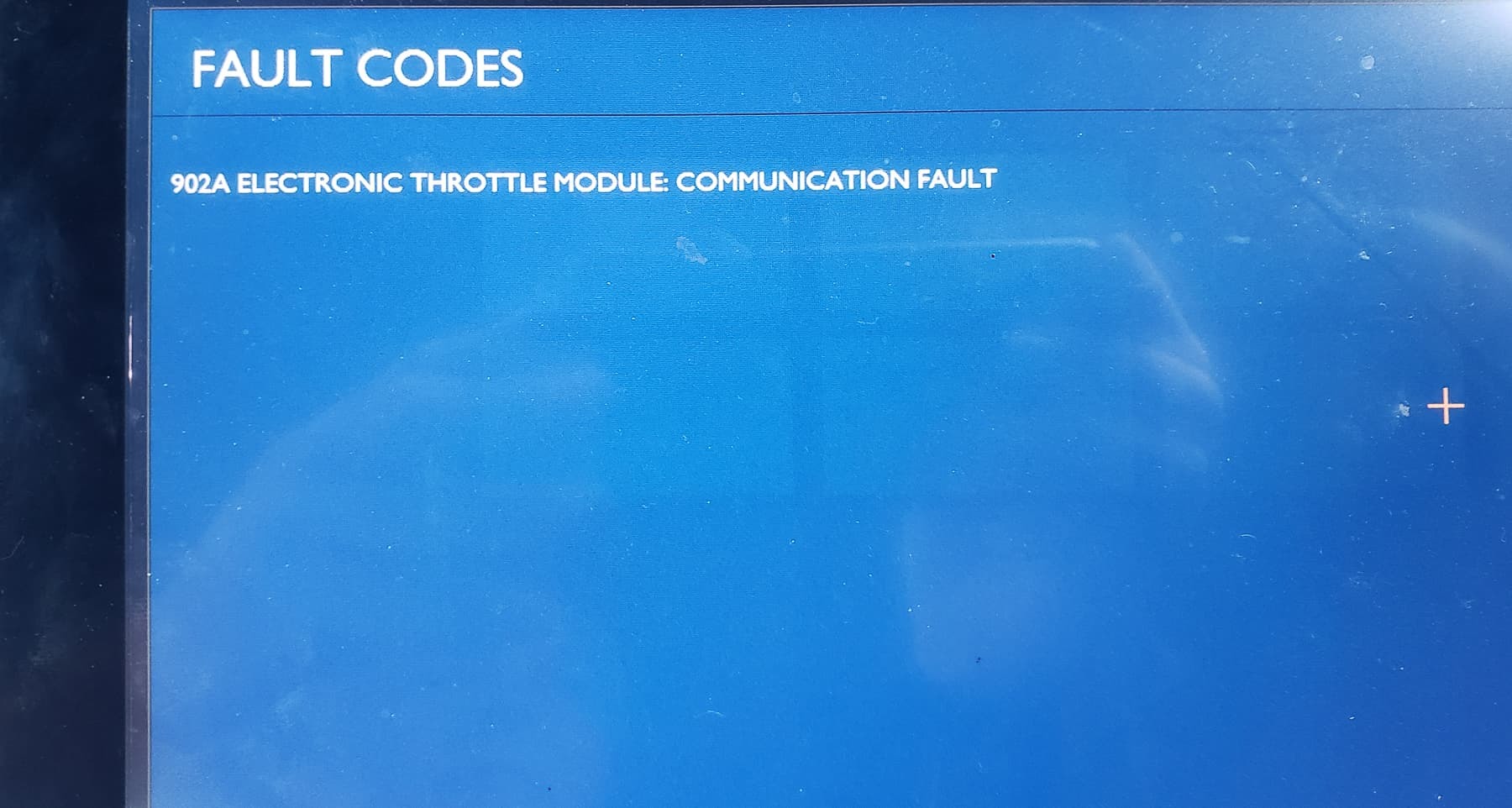 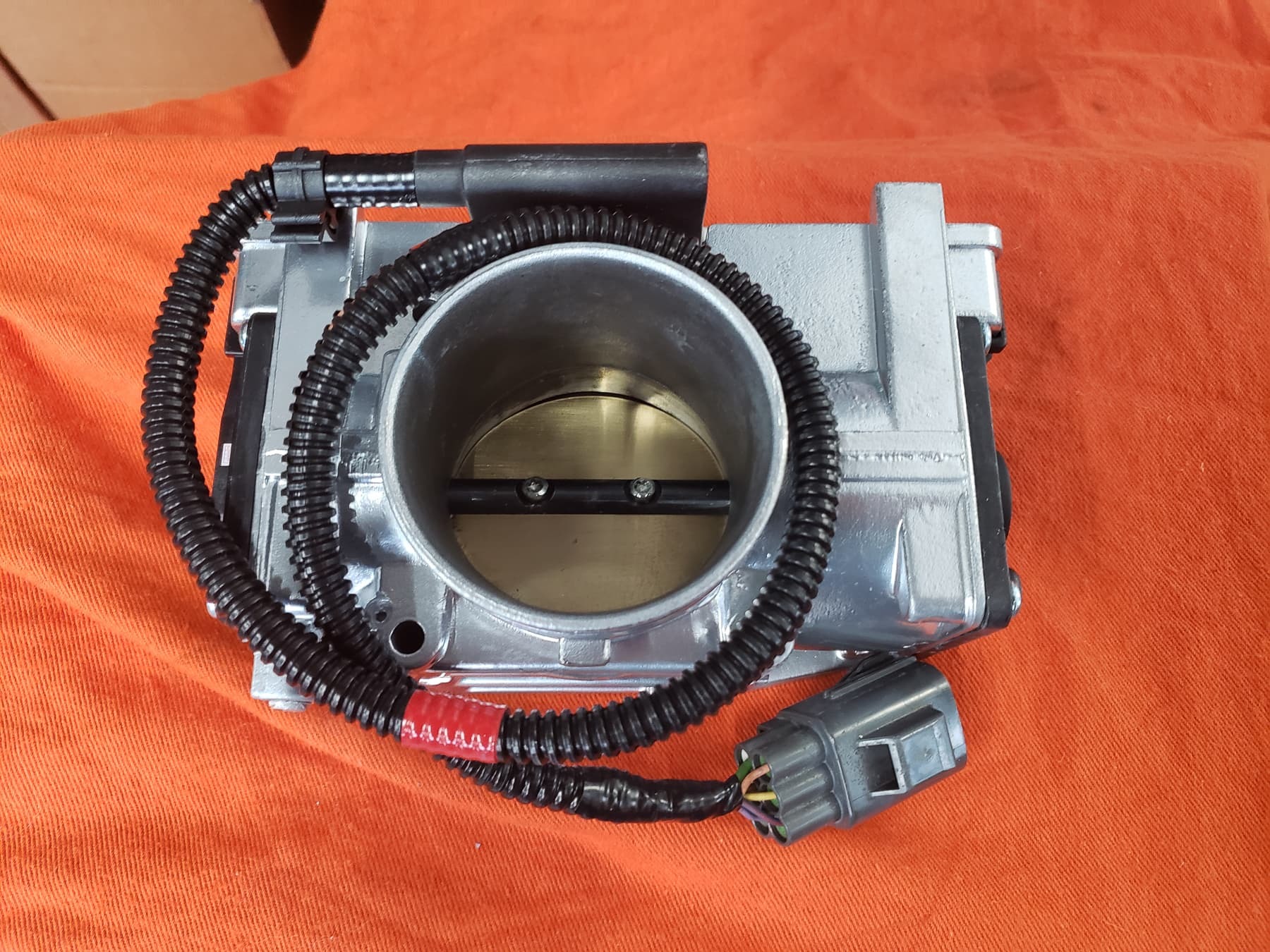 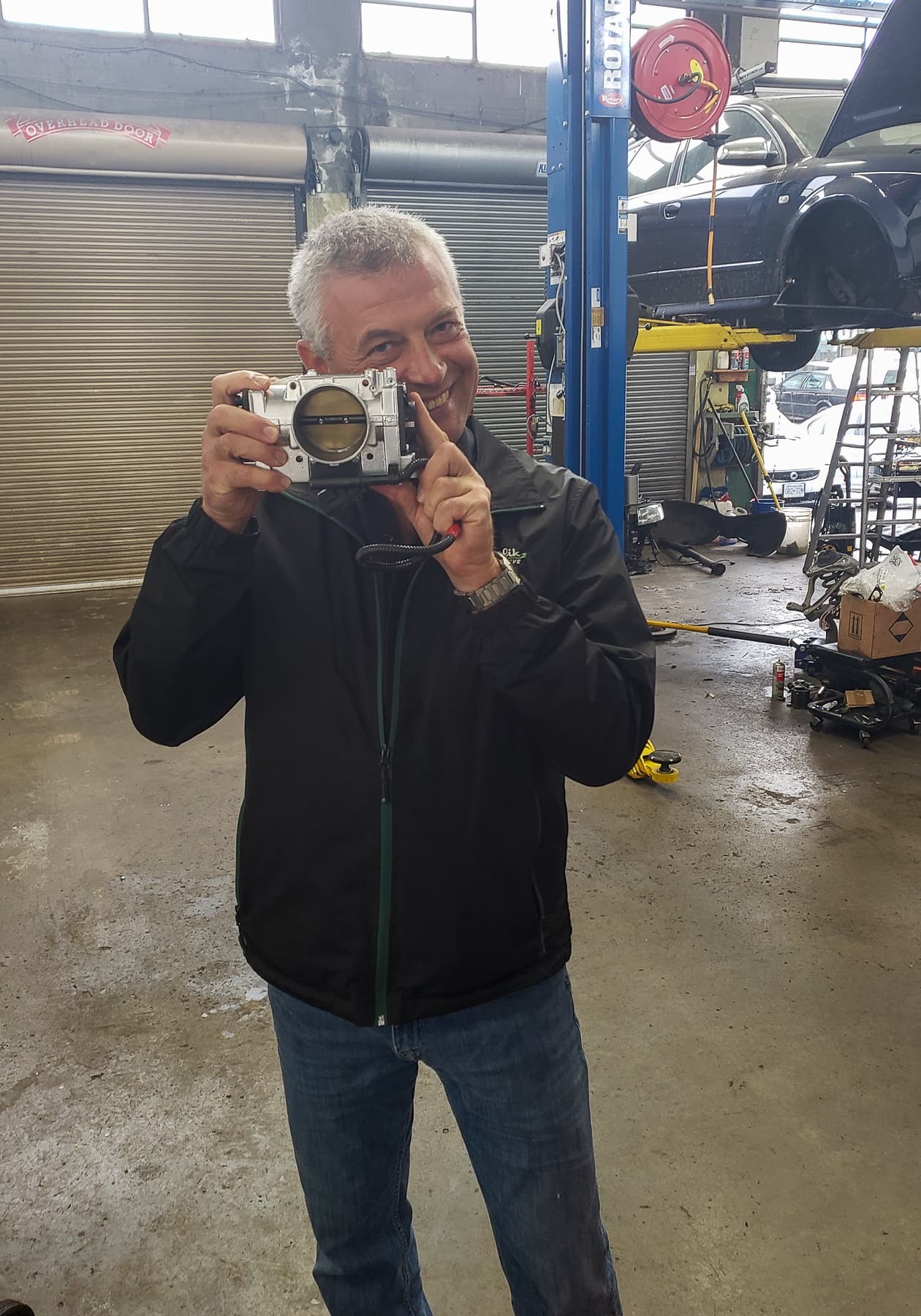 So these are the stored trouble codes in the vehicle computer, engine computer. Five codes. And you see, they're all basically showing you electronic throttle, module communications, internal faults and right there, that pretty well tells you that there's a problem with the unit.

Although there could be other things, and this is why we don't just go, let's just change the part. There's things to verify, like is the wiring good, because a bad wiring connection or no power to the unit can cause all these things. So these were the codes we got initially. After looking at these codes, I cleared them and this code came. Restart the engine. This code came back immediately, electronic throttle, module communication fault. So, proceeded to test the wiring, make sure it was good. And then verify the throttle to module was in fact that.

Mark: So what's involved in replacing the part?

What's involved in replacing it and it depends on where you buy the part, if you buy directly from Volvo, well, or perhaps some other sources, you actually have to reprogram the vehicle to the car. It's a bit of a pain. Volvo reprogramming is not quite as easy as a lot of other vehicles. If you have the factory Volvo, if you're at the Volvo dealership, it's easy, but in the aftermarket world, it's a bit more complex then a lot of other vehicles that we work on that we can easily reprogram. We found a supplier that rebuilds these units, really reasonable price. And they come preprogrammed. So they're just plug and play, which is just a really awesome option. So that's the throttle unit.

What else do we got here? just a little comical photo of the scene. Like seeing looks like a camera. So, it really, it's really funny. It really does look like a camera. I don't know why, no other throttle, electronic throttles look like that.

And there's a picture of our car, which is really nice shape. We'll talk about that a little more, but for a 2000 model year, this probably looks like it just rolled out of the showroom. So kudos to the owner for taking good care of it.

Mark: So why do they use an electronic throttle and I'm assuming that this was something that was fairly common in vehicles?

Bernie: Yeah, it's very common nowadays. Actually in 2000, this is actually one of the earlier cars that use electronic throttles. The reason they use them as is there's a lot of things that can be controlled, like, especially emission wise with a throttle opening. And that's really, I think that's probably the main reason why they use electronic throttle is that they can close the throttle and with electronic engine controls the revving of the, it used to be the throttle would basically control the speed of the engine, but the speed of the engine, it can be controlled a number of different ways by, you know, varying the ignition timing, fuel injection time. There's all sorts of things that can be done with variable valve timing engine as well. You can adjust the valve. There's a number of things that can be done that affect the engine speed. So what they found is, you know, if they close the throttle at a certain time, it actually reduces the exhaust emissions enormously.

So it's probably mostly there for that. And you know, again, this is what electronics allows, you know, full controls over other things you can control things in a pure mechanical world couldn't be done. So I don't know if there's an engine you can buy nowadays, you know, like a 2020 model car that doesn't have electronic throttle. As the two thousands progressed more and more cars had that so.

2001 Suburban, it doesn't have one, but if you look at a 2004, they have them. So they just start adding them. It just makes sense. But it's a more expensive part to replace especially on a car like this Volvo.

Mark: Is that because it's underneath the intake manifold?

Bernie: Not really and I say underneath, it's not, I mean, truly underneath. It just mounted below, the way the Volvo is mounted, it just makes it underneath. But, sometimes I think of underneath together, like a VA with a throttle under, that can make it really tough. But, it's not really that, it's actually the price of the part. And this part, I believe I didn't actually price it all out myself, but I believe a new one from Volvo was like 2000 bucks. We've had Jaguars with failed units like this are $3,000. We have a source that we can get them for much less money rebuilt you know, and they work really, really well. So I wouldn't spend the money on a new one. It's just a crazy amount of money, but yeah, a lot of import cars are very expensive. And then for something like I don't know, it's your average Ford sedan, then there's a lot of aftermarket options available for those. And they're much less, you know, in the $500 range, sort of the price I'm thinking of. But they do fail from time to time. Some cars will last pretty much forever, other cars they'll fail a little more frequently. And this is a common failure part on this Volvo. They fail early and they extended the warranty on, I believe it was up to 10 years. I could be wrong on that, but, this car is 10 years beyond 10 years old. So there's no warranty left on that.

Mark: So with the labor and the more expensive part, this is a medium to really expensive kind of repair then possibly.

Bernie: It is. It's not cheap repair, but again, you know, we've got a source, for really good remanufactured units that are much less like, you know, substantially lower than the price of the dealership. So at least it's more reasonable and you don't have extra costs and hassle too.

Mark: Of course. So how was the S80 after you replaced the part and tuned everything up?

Bernie: Yeah. I ran really nicely and as you can see from the picture of the car, it's a beautiful car. It's really good shape. I don't think it even has a hundred thousand kilometres on it, so not driven much, obviously garage kept and, yeah, very nice car. Really good shape for a Volvo of that age.

Mark: If you're looking for service for your Volvo in Vancouver, the guys to see are Pawlik Automotive. You can reach them at (604) 327-7112 to book your appointment, you have to call and book ahead, they're always busy. They're always popular. They're always fixing stuff. Check out the website, pawlikautomotive.com or the YouTube channel Pawlik Auto Repair, there's hundreds, literally not exaggerating hundreds and hundreds of videos of all makes and models, all kinds of repairs. We've been doing this for eight years already. There's a lot of stuff on there. So check it out. Thank you so much for listening to the podcast or watching. We really appreciate it. If you like it, leave us a review. Thanks Bernie.

Thanks, Mark. Thanks for watching.