Friday’s featured service is Timing Belt Replacement on a 2001 Audi A8.

Timing Belt Replacements are a frequently performed service at our shop. Most of the time they are done as a maintenance service based on the vehicle’s mileage. This Audi’s timing belt however was replaced for a different reason.

Our featured Audi A8 came to our shop for an engine overheating concern.

After thorough diagnosis we concluded that the thermostat was defective, blocking coolant flow to the radiator and overheating the engine. On most cars thermostat replacement is a relatively inexpensive and straightforward repair. Not so on the Audi A8: this thermostat was buried deep inside the timing belt covers and required removal of the timing belt.

Sometimes one repair reveals another pressing concern and this was exactly the case with our Audi. When we removed the timing belt covers we found a timing belt so loose that it could have jumped teeth at any moment and probably caused severe and expensive engine damage.

After performing the timing belt replacement the owner was very pleased with the cars performance. Prior to repairs he had found it was sluggish when stepping on the gas pedal. Now it was very responsive and felt like a new car.

The Audi A8 is a magnificent car. It features a huge interior with comfortable seating for four large and long legged people. The performance is spectacular: just tap the gas pedal and you’re flying. Suspension and handling are very smooth.

For more on the Audi A8 check out this link http://en.wikipedia.org/wiki/Audi_a8

For more information about the timing belt please view this link http://en.wikipedia.org/wiki/Timing_belt_%28camshaft%29 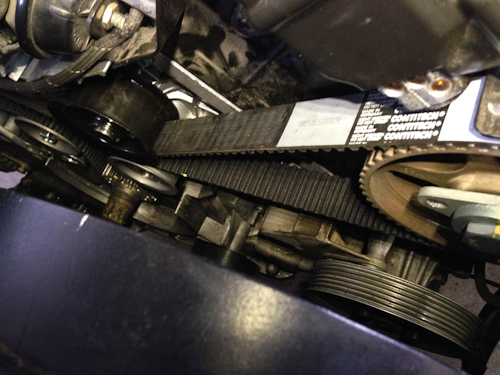