Mark: So we're going to talk about a 2001 Chevy Silverado diesel that had a problem. What was going on with this truck?

Bernie: Yeah, so this truck came to our shop with the crankcase filling up with too much oil. The oil level is actually going too high and it was starting to leak out. The customer had some issues with this for a while, had it at another shop. They'd done some work on it and weren't able to fix it. So they brought it to us.

Mark: So, what did you discover was causing the engine oil level to rise?

Bernie: Yeah, so what is in fact happening, of course the engine oil level will only rise if you pour more oil in which wasn't happening. But what happens on a diesel like this, and a lot of diesels, they have internal plumbing, the fuel injectors are inside the engine. The injection pump has a seal into the engine and there's a whole array of plumbing under the valve covers into the engine which can cause diesel fuel to leak and fill a crankcase up with diesel fuel. So the oil level is going up, but it's actually really diesel fuel that's filling up the crankcase.

Mark: And diesel fuel does not do the same job as oil in your car.

Bernie: It isn't, I mean, it, it is a lubricant but not as good as oil and it's certainly not formulated to work like motor oil. So it's not a good thing.

Mark: Yeah. So how can that, so this was filling up quite a bit, what was going on? Why was it filling up with so much diesel?

Bernie: Well, as I mentioned, there's a few ways it can leak. A few ways diesel can get in. One is through the, there's a seal in the injection pump where the injection pump bolts to the engine. There are fuel injectors, of course, that can leak. And then there's a lot of plumbing under the valve covers from each injector through their return lines. And on this particular engine, those have a number of seals and pipes and things that could leak fuel as well and fill up the crankcase.

So it's really a matter of doing some testing but just take it a step further. The owner had previously had all the injectors replaced at another shop. They had done the work. I believe the problem was there beforehand. They took everything apart. Apparently according to the owner, three times to try to find the leak, they said, there's nothing wrong with the work that they did. Everything was fine.

And so he brought it to us to take it to the next step. And from there, we really concluded that, you know, assuming that the other shop had done a good job you know, that there was only one other spot that he could leak from. And that was from this fuel injection, the high pressure injection pump seal.

Mark: So you changed the pump. What sort of work is involved in replacing a diesel injection pump?

Bernie: Well, it was a fair bit of work involved in doing one of these? I think we should just get into some pictures. We can have a look at it, but yes, we changed the injection pump. 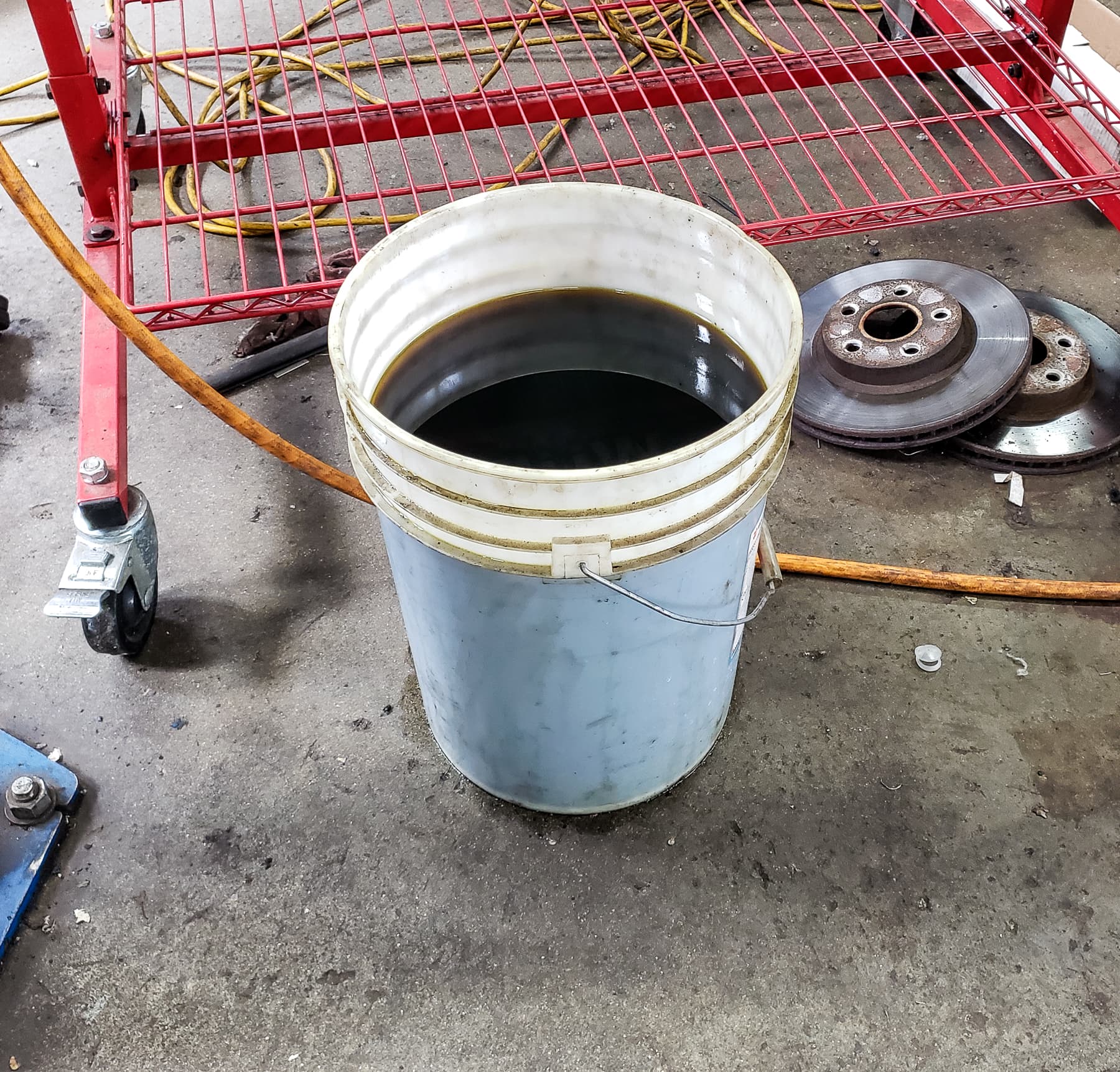 There is sort of where the pump is located. So this is the top of the engine. You can see the turbocharger back here. A lot of the air intakes have been removed. The pumps buried in back here behind some of the coolant pipes. It's a fiddly job. It's not as hard as doing the injectors, but there's a quite a number of hours of labor involved in taking the pump out and replacing it.

This is a view of the new pump with the new seal on the front. And one last picture to look at, this is the oil we drained out of the engine. So that's a 20 litre pail. You can see there's probably about 16, 18, 17 litres of fluid in there. There should only be 10 that's how much the crankcase. So the levels should be down around here somewhere, where to drain it. So got probably at least seven extra litres of diesel fuel in the crankcase, which is what we pulled out.

Mark: So basically a pretty big problem that took a lot of effort  to repair, how often do you see this issue with Duramax diesels?

Bernie: We haven't run into it too often in our shop. It does happen from time to time and it can happen on most diesels you know, because I said that there's a lot of internal plumbing. A lot of diesels, and isn't just, you know, American truck diesels, but a lot of other diesels they'll actually have a warning that comes on if the oil level gets too full. I know we've seen it on a few others. So there's a monitor for that, because of course, you don't want too much fuel in the crankcase. It'll dilute your lubrication, which is not a good thing. Plus the oil actually starts leaking out. You know, so when it gets really bad, you'll know it, but it's not a good thing.

Mark: And how are these Silverados for reliability?

Bernie: Oh, super good. They're kind of still my number one for North American diesel. Just especially if you take an 01, they're definitely, I'd say the most reliable, but you know, a small margin. And now these, of course, this truck is getting pretty old. It's a 20 years old now. So more problems are starting to occur. But you know, when these things were younger, say 10 years old, if you compare it to a Ford, there's a lot more, I know Ford owners hated me saying it, but truth is true. You know, there was just more problems with Fords. And Dodges have been pretty reliable, but you know, there's, there's a few issues. It just seems like the GMs have been more reliable overall.

Mark: There you go. You need some service for your Chevy Silverado or GMC diesel pickup truck in Vancouver, BC, Canada, the guys to call are Pawlik Automotive. You can reach them at (604) 327-7112 to book your appointment. You got to call and book ahead. They're busy. They're super busy right now, actually. Or you can book online on their website pawlikautomotive.com. Click the button, put the information in. They'll get back to you. Make sure they're ready for you when you show up. As well, thanks so much for watching us on YouTube. We appreciate it. And you can watch more videos. We have close to a thousand there under Pawlik Auto Repair. And thank you so much for listening to the podcast. We really appreciate it. Thanks Bernie.

Bernie: Thank you, Mark. Thanks for watching, listening.