Wednesday’s featured post is Fuel Pump Replacement on a 2002 Chevy Cavalier, brought to us by a client from Burnaby, BC.

The Chevy Cavalier was for many years the top selling GM car; and for around 12 grand it was a pretty decent car. For that price, though, the Cavalier was basic transportation.

Early Chevy Cavalier engines were prone to blown head gaskets however they rectified this concern on later models.

Our featured Cavalier was towed to our shop with a no-start condition. After diagnosis we determined that the fuel pump had failed (this was our second fuel pump replacement this week, the other being on a Dodge Ram truck).

As is the norm in 2000 and newer vehicles, the fuel pump is part of the fuel tank module: a unit which simply slips in and out of the gas tank (once the tank is removed from the vehicle). The module contains the fuel pump, the pressure regulator, fuel gauge sending unit and on some models, a tank pressure sensor and the fuel filter.

With the pump replaced the Cavalier roared to life and ran great. The new pump should last for another 10 or more years. At one time GM products had very poor quality fuel pumps but this is no longer the case.

For most vehicles you can expect to get 200,000 kilometers out of your fuel pump, however some die sooner but many will last twice that distance.

For more information about the Chevy Cavalier click this link http://en.wikipedia.org/wiki/Chevy_Cavalier

For more about fuel pumps, mechanical and electric check out this link http://en.wikipedia.org/wiki/Electric_fuel_pump 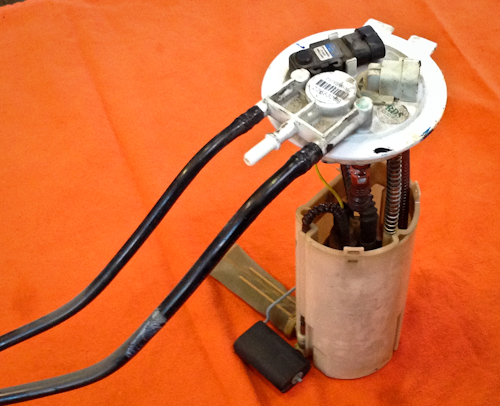 Fuel tank module: fuel lines to engine run from the top of unit to the edge of the picture; the fuel pump is inside the plastic housing on the bottom; the black piece on the bottom is the fuel gauge sending unit float