Mark: So today's victim is a 2002 Ford Windstar that had a bit of an actual problem. What was going on with this vehicle?

Bernie: Yeah. So this vehicle, actually the rear axle was broken in the vehicle, making some pretty horrific noises when the owner was driving it.

Mark: That might be a problem. What type of rear axle does this vehicle have?

Bernie:  So this a front wheel drive vehicle. It just has a solid beam axle on the rear, basically just a big metal bar that connects one end of  the left wheel to the right wheel to the spindles. And that's basically the axle. It's a pretty simple design, just a big gigantic chunk of metal. You know, obviously machined to precision for somewhat precision, but no moving parts or anything mechanical, just a solid beam of metal.

Mark: So how do you bust that?

Bernie: Very good question. I'd say it probably just metal fatigue. Let's just get into some pictures right here so we can see what's going on. 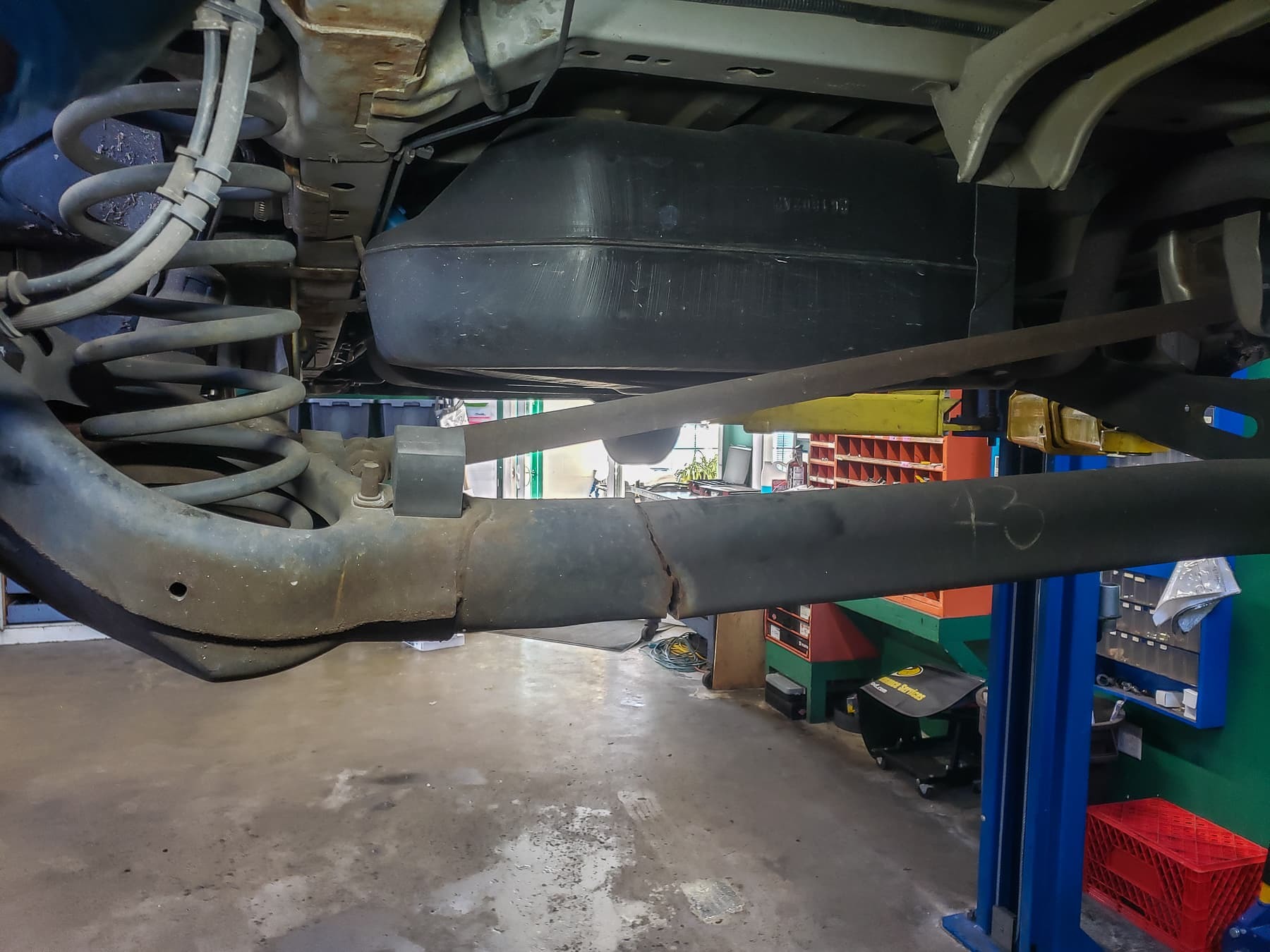 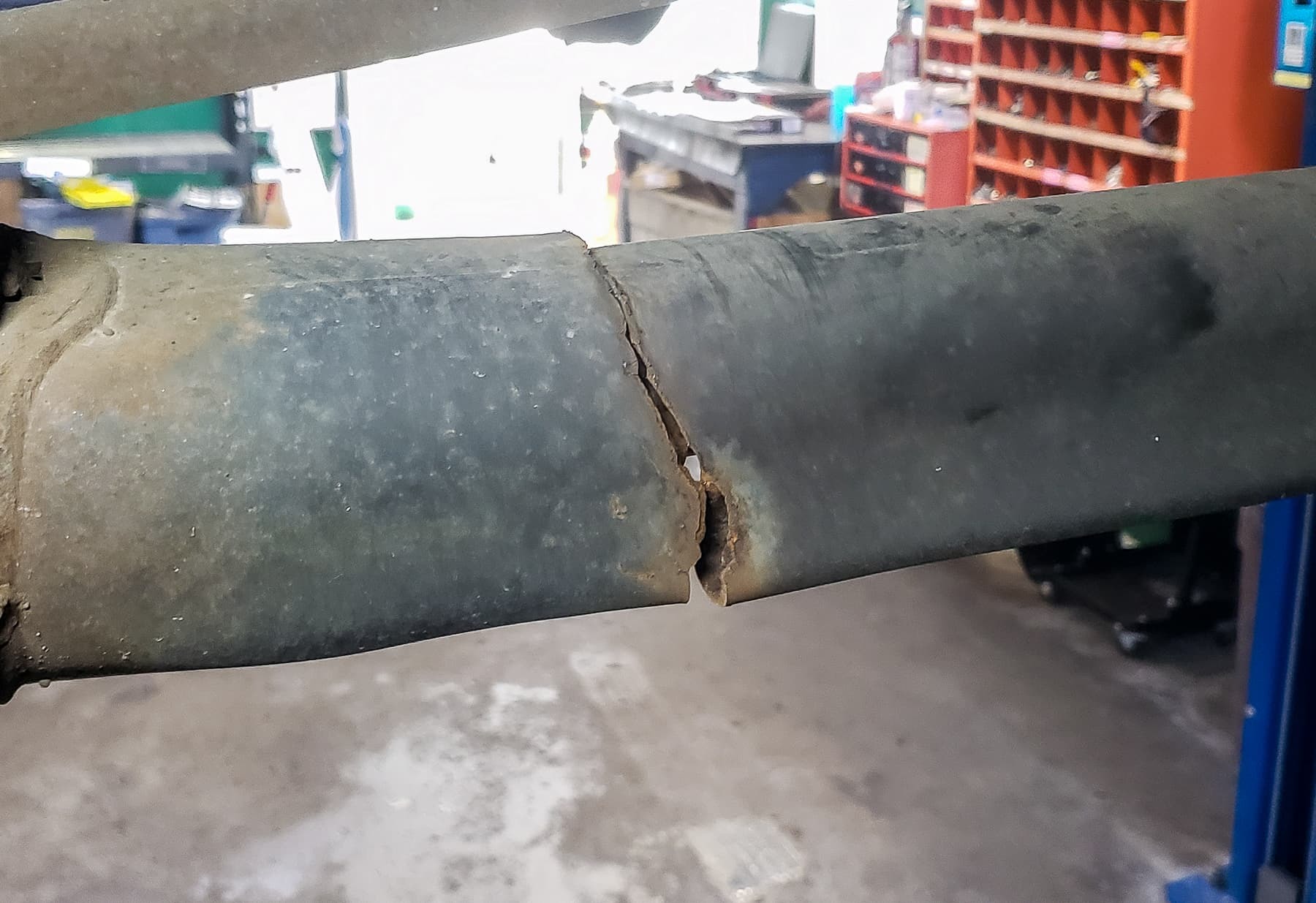 So this is the back of the vehicle. The camera's pointing forward, you can see the fuel tank up here. You can obviously see right away there's a big broken chunk of metal here. And again, as you can see, it's a big solid axle. There's a stabilizer a rod that connects from the body to the axle to keep it from sideways movement.

You got your coil springs and then of course there's arms that go forward as well, trailing arms. We'll get into a closer picture here of the crack. There you can see the crack. So there's obviously, you can see some rust on the metal and it's, I guess what happened at some point a slight crack developed, and as this happens, it just gets worse and worse over time until it finally breaks. But why, kind of hard to say for sure. I mean, it's a pretty solid chunk of metal. Never, never actually seen something like this break before, so there's always new and fun stuff in our trade and this is one of them.

Mark: So what'd you do to repair this issue?

Bernie: So we basically just got a used axle assembly, which came with the trailing arms and removed all the pieces as we needed to and just swapped it in. It's a perfectly good use part to buy because of course it's a solid piece of metal. We can look at a visually, make sure it all looks fine. And being a 2002 and a Ford likely they wouldn't even sell us part new anymore anyways.

Mark: So, is this a pretty time consuming or complex job?

Bernie: Not too bad. You know, simpler than an actual rear end with with moving parts in it like an actual differential type of rear end. You know, there are brakes to bleed, brake hoses to disconnect, brake parts to swap over, you know, being, we're getting it from a used axle.

It's definitely a good chunk of time to do the job, but not really crazy.

Mark: So this is an 18 year old van. Windstars, they're not even made anymore. Not very many of them around how are they for reliability?

Bernie: You know, they, weren't the greatest vans. I would put them on one of the lower end reliability vans. I mean, like you said, there's very few of these left. They were very popular for a long time, but a lot of them didn't have the best engines. They had head gasket problems, a number of things I would say they weren't the greatest in terms of reliability.

In 2002, there was a lot of American minivans that really weren't very well built. Weren't very reliable, and this was definitely among one of them, but this one has survived. And you know, it keeps on going. So, you know, the thing that the cracked axle, of course, it's just a weird, bizarre kind of thing, but not really indicative of the reliability of the van. There were other issues. Transmissions were problematic too on these, electronic items and things. It wouldn't have been on my most recommended lists.

Mark: So was it worth repairing?

Bernie: Yeah, it was worth repairing. I mean, the owner has been a customer of ours for a long time and takes pretty good care of it. So, you know, it was still worth repairing for him. Some people may have given up. It really depends on your circumstances, but for this one, it was okay.

Mark: If you're looking for some service for your vehicle in Vancouver, the guys to call are Pawlik Automotive. You can reach them at (604) 327-7112 to book your appointment, you have to call and book ahead. They're always busy. Check out the website pawlikautomotive.com. Hundreds of videos, almost nine years worth of videos of us doing this all makes and models and types of repairs. The YouTube channel is Pawlik Auto Repair. Again, hundreds. Not exaggerating hundreds. And of course, thanks for listening to the podcast and watching. We really appreciate it. Thanks Bernie.