Hot on the heels of our last featured post I thought I’d do another one from the same truck on the same visit to our shop. It’s a Ford F350 Super Duty 6.0 Liter Diesel brought to us with some oil pressure gauge concerns.

Besides the worn front end and bad tires this truck was brought to us for the client’s major concern: the engine oil pressure gauge dropped to zero intermittently. This was of great concern to him, as it should be. He took some action of his own and determined that the engine was low on oil. He then proceeded to add great quantities of oil to the engine. The vehicle was then towed in as the concern continued.

The first repair for us was to replace the engine oil dipstick as the plastic top had broken. We quickly found that the engine oil had been severely overfilled, an easy mistake that we’ve seen many times in the past.

We drained out the oil until the level was properly set. Next step was to road test the vehicle with a scan tool connected to see if anything would be revealed. After a length road test we confirmed a couple of things: the engine ran well, all scan tool data was normal and the oil pressure gauge would suddenly drop to zero once in a while when slowing down. Scanning the instrument cluster module we found a stored code for a defective oil pressure sender.

First repair step was to replace the oil pressure sender. One big clue for us that it was only a sender or gauge problem is that the Ford 6.0 liter diesel relies on the engine oil system, not only for lubrication, but also to boost the fuel injection delivery pressure. Any drop in real oil pressure would cause this engine to stall and may make restarting difficult. Once we removed the oil pressure sender we also noted that it was leaking, another sure sign that it was defective.

We always hope for happy endings to our repairs and this one certainly did not disappoint. A long road test found no further gauge malfunctions.

This brings me to two further points: one is that this Ford truck’s oil pressure gauge is really inaccurate. I had noted while driving the vehicle that the gauge needle sits in the same position all the time with the engine running. A real gauge would show fluctuation based on engine temperature and RPM.  Our repair information confirmed this: the sender unit really acts like an oil pressure switch: either on or off. It is not a true sending unit that sends a variable signal.

Second point: if you own a vehicle and you think the oil level is low be very careful how you check it. Don’t panic!!!  Take your time to closely look at the dipstick and add oil 1 liter at a time, then recheck it. Overfilling the crankcase can cause lots of problems. On this truck, the owner only wasted a bunch of money for oil he didn’t need. Others have not been so lucky: we have seen some overfilled engines where oil leaked out damaging air filters, crankcase breathers and gaskets.

For more about the Ford 6.0 Liter Diesel click here http://en.wikipedia.org/wiki/Ford_Power_Stroke_engine 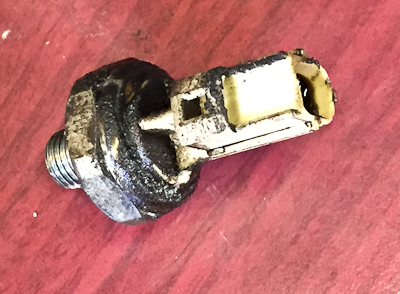 Old oil pressure switch. Not the oil film: this sensor was leaking. This is not a true sending unit but is rather an on/off switch that is really more suitable for an idiot light. It’s a bit of cheap engineering from Ford.