Mark: So we’re talking about a 2003 tank, oh I’m sorry a Mercedes G500 and a power headrest repair - what was happening with this G wagon?

Bernie: It was brought in for a few things, but what we’re going to talk about today is the power headrests on both front seats that were not operating.

Mark: So what was involved with repairing that issue?

Bernie: Well there were two things: first off being a Mercedes everything is electronic, and it’s all extremely complex, so we connected our scan tool to the vehicle and communicated with the electronic module for the power headrests. So we looked at the stored codes and data; for the passenger side it basically lost it’s programming so we were able to reprogram the headrest unit and the headrest started working. On the drivers side however, there were some additional stored trouble codes and it involved some more complex repairs. What we did next was we accessed the headrest motor unit and took that apart, and examined it for the cause of our faults.

Mark: So what did you find when you opened that up?

Bernie: Well, it was very interesting. What we found was that there were some broken solder joints; there is an electrical connector plug - the plug is basically soldered onto a circuit board and where the plug is soldered onto the circuit board, the solder joints had cracked. It happens from time to time. We we were able to simply re-solder the joints back to the board and the issue was solved. We put everything back together and the headrest works perfectly. Oh and by the way, we had to reprogram that one as well but after that both headrests worked perfectly. 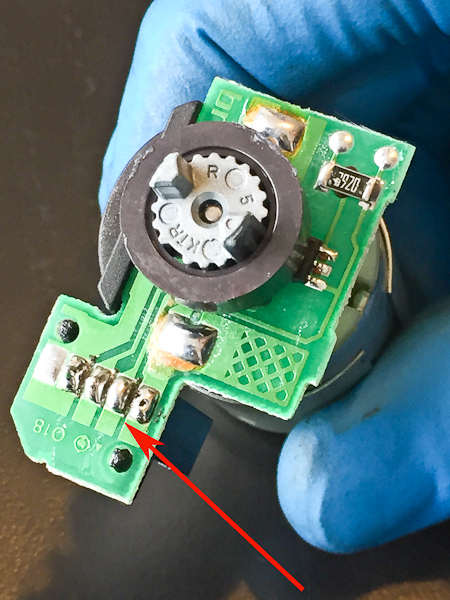 Driver's seat headrest actuator motor. This has been removed from the housing. The red arrow points to the solder joints that were repaired. This photo is taken after repair showing good solder joints.

Mark: So are these bad solder joints a pretty common problem with there being so much electronics and the Red Boards and all kinds of stuff now on cars?

Bernie: You know we don’t see that problem too often, I’m almost happy when we do because it makes for a very reasonably priced repair for the customer. It's something we can do simply and it doesn’t involve spending a lot of money on parts and it’s something we can do quickly. We don’t see them very often anymore but over the history of time on cars, there has be quite a number of different common problems that happen due to solder joint problems. This issue with the G wagon headrests solder joints is a common issue by the way, it’s actually one of the more common causes of them failing. But we’ve had Honda’s where there’s a problem with the circuit board on a main relay and you just heat it up and fix the solder joint and it’s good for another 200,000 kms. We’ve seen quite a few years ago when engine computers were a little less "miniaturized." There sometimes we would find dry solder joints inside of those. So from time to time we find it, it’s always I find, a gratifying repair for us and the customer.

Mark: So what’s your opinion on the Mercedes G wagon?

Bernie: Great vehicle. You initially said it was a Mercedes tank and you’re kind of right about that, these things are rather tank like. They’re very expensive. It’s amazing how well they hold their value, so if you want to be able to drive a sport utility vehicle that holds it’s value, this is a good one to buy. But they cost a lot to buy, this used one is selling for $60,000 dollars for a 2003. Low mileage, immaculate condition, but that’s a lot of money for a 2003 vehicle. There are a lot of really fancy models around, we see them around Vancouver and Richmond but are way, way way up there in price. So great vehicles, very reliable but being Mercedes and an European car, they are a little finicky but they’re very nice.

Mark: So there you have it, if you’re looking for repairs on your Mercedes G500 in Vancouver, the guys to go see are Pawlik Automotive. You can reach them at 604-327-7112 or go to their website, tons of information on there - a few years of hangouts now - pawlikautomotive.com Thanks Bernie

​For more information on the Mercedes G500 click here ﻿https://en.wikipedia.org/wiki/Mercedes-Benz_G-﻿Class