Mark: So today's victim is a 2003 VW Eurovan. The engine wouldn't start. Why wouldn't it start?

Bernie: This is going to be a fun podcast. It was an interesting situation. So the owner of this vehicle called me and stated that she had the vehicle at a shop that she'd been dealing with for quite a while. Not a full service kind of shop like us or let's put it this way, it's kind of a chain of shops. I don't wanna make any names. It's a, you know, nationwide chain of businesses that do a variety of work. She'd been dealing with them for a while, liked them, the vehicle wouldn't start.

The mechanic had basically pulled out the spark plugs and found some metal filings on the spark plugs and decided the engine was basically wiped out. And I thought, okay, well, it is a VR6 motor. These do have timing chains. They can fail. You know, it's possible it skipped some teeth and busted something. I mean, we see a lot of broken engines all the time.

So I said, you know, just bring it over. Let's have a look at it and then we'll decide what to do from there. So got the vehicle to the shop. We cranked the motor over. And it kind of sounded normal, but it wouldn't fire, but there was no knocking or any hideous noises or anything seized.

So that's kind of what we started with and decided, Hey, let's start with our level one diagnostic and see what's going on with the vehicle. So again, just to frame it, this is from another shop saying your engine's done. It's going to need to be replaced.

Bernie: My mechanic scanned it, found there's one trouble code for an ignition coil failure. Cleared the code, cranked the motor over some more and it actually started . Yeah. Yeah. It started blew out huge clouds of smoke. It had obviously flooded. What we assume happened is that either you know, that maybe a coil failed or something happened or the engine flooded and wouldn't start.

And you know, someone who, without any experience had looked at it and kind of determined the worst. So there was more things I mean, what we eventually ended up repairing was replacing all the spark plugs, replacing the ignition coils, doing a motor back fuel injection cleaning. And I believe an oil changes included with that as well, because it was due for service. But that's basically what it ended up being, going from an engine replacement to a major tune up, let's say.

Mark: Do you have some pictures?

Bernie: Yeah. Let's have a look at some pictures. So we just got a couple to look at here.

So here's a set of the ignition coils here. So it's a VR6. It's an interesting designed engine if you look at it. It almost looks like a straight six engine, but the cylinder heads are kind of just slightly V I think it's a 15 degree V engine. 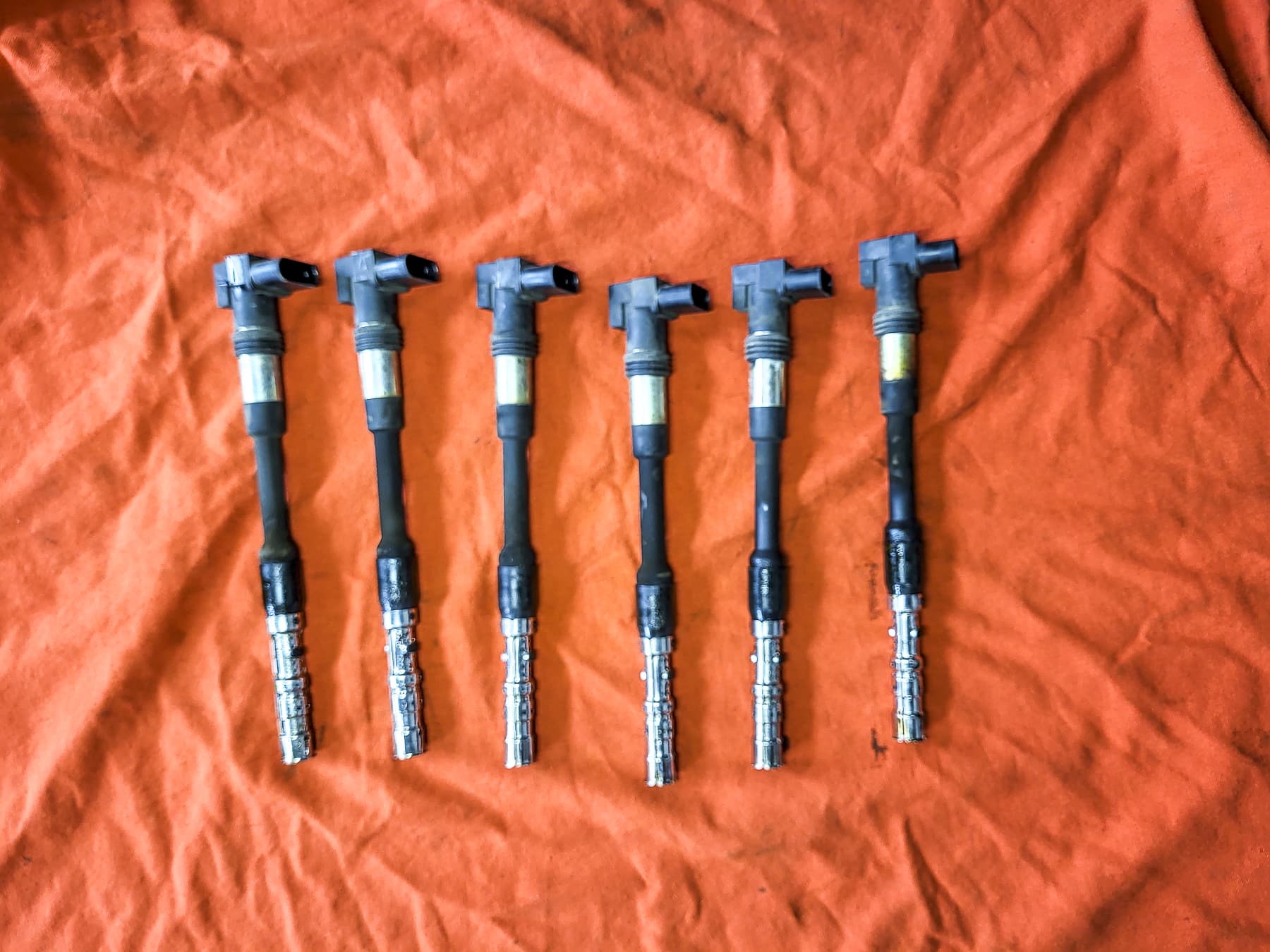 It's kind of a brilliant bit of design work on Volkswagen's behalf. Very compact fitting type of engine. The coils are very long. They stretch down from the valve, way down in the cylinder. So these are the coils we replaced and you know, the code was only for one coil, but it would be, you know, it's foolish in a situation like this to just change one. May as well do them all they'd never been done before. So there's the coils.

Another picture of the spark plug. There's kind of a close up view. So again, these plugs have been in there for quite a long time. You know, the gap is, you see the gap is worn here and these metal bits you know, that this mechanic had found, don't know what to say about it. But, you know, it's an interesting. I have to say I kind of feel for the shop owner because it's hard to find good people these days. And I think he was basically you know, this person was basically a second or third year apprentice, which was all he had, which is great if you're doing like brake jobs and simpler things on cars, you can get away with something like that. 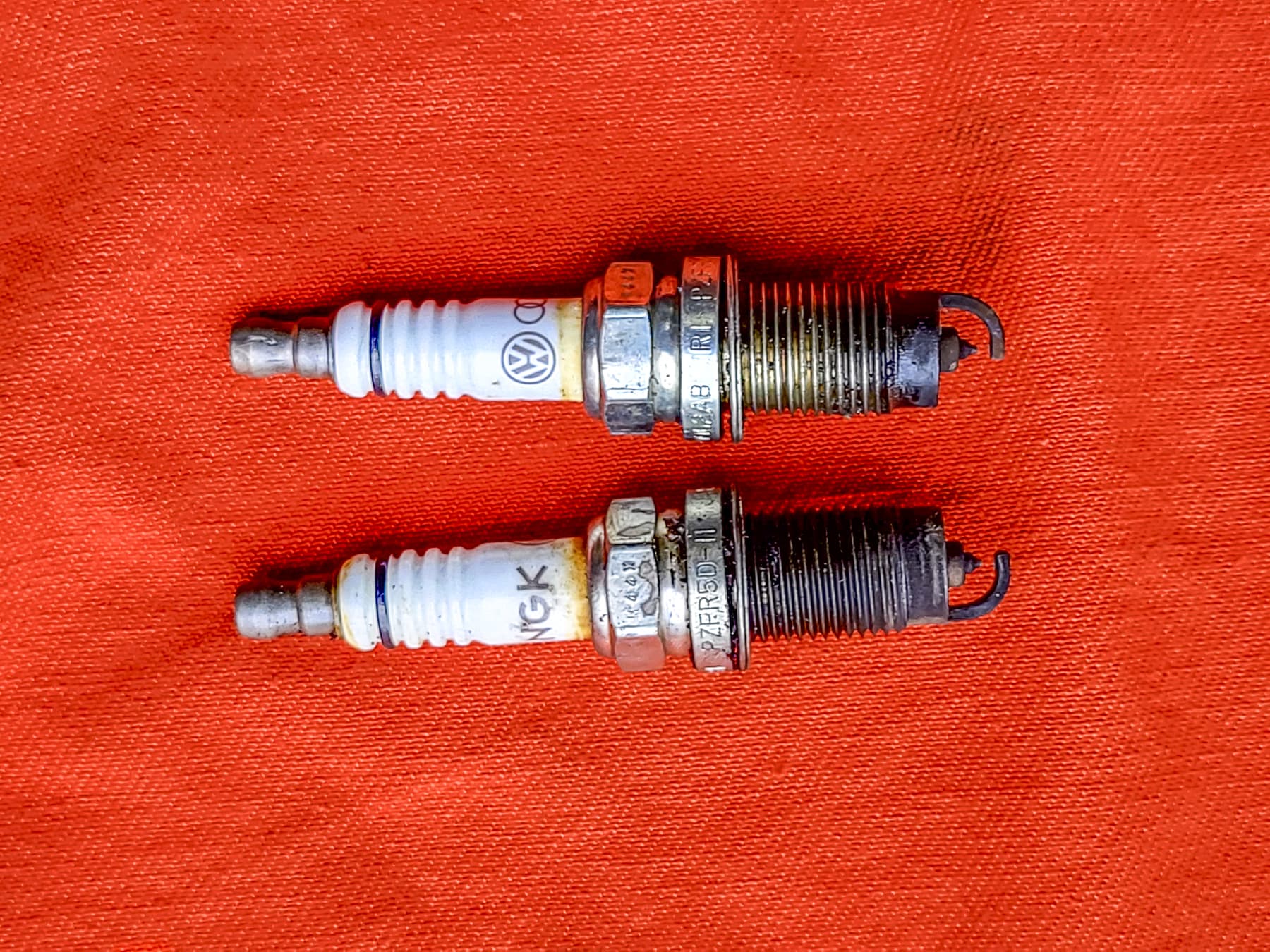 But once it gets into engine repairs, you really need to have the, nothing wrong, having an apprentice look at it, but having someone with a journeyman expertise to look and go, Hey, is this a problem or not? Cuz obviously what the person saw didn't really reflect any, it wasn't a problem. Anyways, those are the spark plugs. So we replaced those. And that's a picture show, just a shorty for today.

Mark: So how did it run after all the repairs?

Mark: Can we give a rough comparison? Like what would a new engine have cost even a used, rebuilt, whatever, and compared to what you guys did.

Bernie: Well, I think the bill that we had by the time it was done was 2000 ish dollars. I think somewhere in that range for everything we did. An engine job, would've been at least, like with a used engine, would've been at least. I don't think we actually went around to try to find one because we didn't need to, but I would speculate that you'd probably be looking at eight to $10,000, even with the used engine. It's incredibly labor intensive process to replace the engine on this vehicle. And even if you were to find one, you know, it would probably be a four to $5,000 engine. So by the time you add that tax and oil and all that kind of thing. That was a rebuilt engine, probably 15,000 type of dollars, you know, to do that. So, yeah, it's a lot.

Mark: So how are these VR6 Eurovans for reliability?

Bernie: Well, I'd say that they're not the best vehicles. They're expensive to fix. You know, the VR6 is not the most reliable engine, but you know, this one did have 220,000 kilometres and if they're well taken care of, they will last a long time.

It just, over the years, we've done a lot of, you know, VR6 timing chains, and there's a lot of other shops have timing chains and other issues. People love these vans though. The owner just totally committed to the vehicle, as a lot of people are.

And I think Volkswagen vans have had this following for a long time. I mean, I had a Westfalia back in the air cool days. They're pretty unique kind of van and people really like them for that kind of thing. But I think you know, unless your's maybe like a Eurovan Westfalia unless you really need that van, there's probably better options out there that will be far less costly.

I mean, even a Dodge Caravan, you know, they're probably more reliable and I mean, not as nice of a van, but much cheaper to operate. So it depends. I figure, you know, in life, buy what you want, if you like the van go for it, you know, you're just going to be spending more money than the average person fixing it. It's a German car. What can you say car?

Mark: If you need repairs for your VWs, whether it's a Euro van, whether it's a diesel, whether it's a VR6, whatever, Jetta's you name it? The guys to see in Vancouver, Pawlik Automotive. You can reach them at pawlikautomotive.com. You have to book ahead, you can book online or you can call them (604) 327-7112 to book. They're always busy. Really appreciate you watching. Check out the website, hundreds and hundreds of videos on there. 11 years, we've been doing this. Close to a thousand, I think. And on Pawlik Auto Repair on YouTube. If you wish to watch it there. Thanks so much for watching. We appreciate it. And thank you, Bernie.