Our latest featured repair is U-Joint replacement on a 2004 Dodge Ram 2500 Pickup, brought to us by a client from Richmond, BC.

U-Joint, which is short for Universal Joint is a flexible component on a driveshaft. Driveshafts are usually found in rear wheel drive and four wheel drive vehicles. They connect the transmission or transfer case to the differential. As there is typically up and down movement between the differential and transmission a flexible coupling must be installed, and that is the universal joint.

Going back to the 1970s and earlier almost every American made car was rear wheel drive and all had driveshafts with u-joints. Nowadays this part is mostly found on trucks.

Our featured Dodge Ram 2500 was suffering from squeaking sounds and vibrations when accelerating and decelerating. Upon inspection and diagnosis we found the rear u-joint seized. On this driveshaft there are two more u-joints along with a center support bearing. These parts were still in good working order and were not replaced.

Had the owner neglected this problem the rear u-joint would have deteriorated further. The next step of wear would be loud clunks and thunks when changing gears. If left long enough the joint could break apart and this normally destroys the driveshaft adding extra costs and inconvenience.

For more about the Dodge Ram 2500 pickup click this link http://en.wikipedia.org/wiki/Dodge_Ram

For more about universal joints view this link http://en.wikipedia.org/wiki/Universal_joint 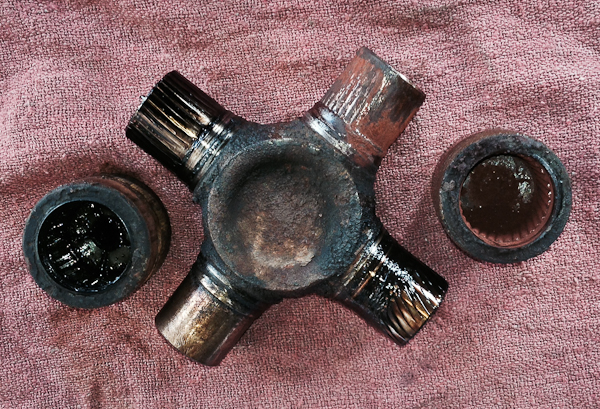 Worn out u joint from Dodge Ram truck. Note the rusty bearing cup on the right and the rusty pin (trunion) on the top right. When assembled this part was seized and would not allow movement. This also caused squeaking and vibration