Fuel Injector Replacement on a 2004 Ford F450 6L Diesel is today’s featured service, brought to us by a client from North Vancouver.

The Ford F450 looks much like an F350 except when one looks underside: there the medium truck features are evident, with large axles and bearings and a beefy leaf-spring front suspension.

This 6L diesel is still the infamous unit found in Ford trucks from the F250 t0 F550. While this engine is fraught with a number of problems it is fully capable of performing in heavy duty applications: that’s what it was built for.

Our featured truck came to us from a client who had just purchased the vehicle for his landscaping business. The small dump box on the back is well suited for hauling rocks and dirt. The truck had several concerns including worn brakes, loose ball joints and steering linkages; all of which we repaired. Additionally, and equally importantly the engine ran roughly and there was a substantial engine oil leak

We diagnosed these concerns and found #7 cylinder fuel injector was dead along with several weak injectors on the right engine bank. Oil leakage was mostly coming from the high pressure oil pump cover.

Fortunately all the faulty injectors were on the right bank so it made sense to change only those four. To repair the oil leaks required extensive disassembly, and so, while in there we installed a new engine oil cooler, resealed the oil filter housing and installed a Bulletproof EGR cooler. With all of the above repairs completed the truck ran very well, leaked no further oil and should prove to be reliable as several of the major engine problems (EGR cooler and oil cooler) have been repaired.

For an excellent article about the Ford 6L diesel click here http://www.internationalpowerstroke.com/6.0L-powerstroke-problems.html 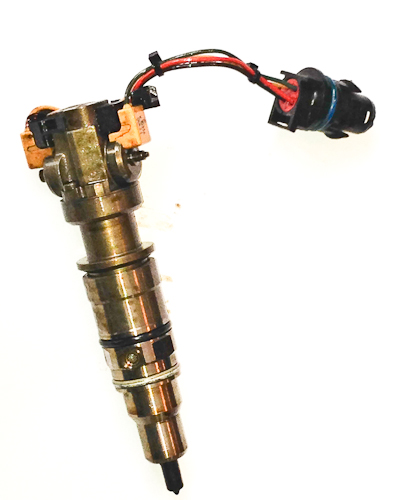