Our latest featured repair is Ignition Coil Replacement on a 2004 Jaguar S-Type brought to us by a client from Tsawwassen, BC.

This 2004 Jaguar S-Type came in running very poorly with the check engine light illuminated. During our diagnosis we found several stored trouble codes: the most important were misfire codes.  Five of the six cylinders had recorded a code. Further diagnosis and testing found two dead ignition coils along with several badly worn spark plugs.

The Jaguar S-Type comes with three engine options, this car being equipped with a 3 Liter V6 engine, by far the most common offering in this vehicle.  Each cylinder is fitted with an ignition coil. With the already two dead coils, the worn spark plugs and the over 200,000 kilometers on the car the best line of repair was to replace all the spark plugs and ignition coils. Sure we would could have replaced only the known bad coils but when another one fails sometime down the road the vehicle will be back for more diagnosis and the overall cost and owner stress will be much higher.

Over the years the Jaguar S-Type has proven to be a decent, reliable car. We work on a lot of them and none require anything more than average repairs and maintenance. Around this era of Jaguar the company was owned by Ford and they did a lot to improve Jaguar cars. English cars were notorious for lack of reliability but Ford has clearly turned this around. The V6 engine used in the S-Type is essentially a Ford Duratec engine, a unit found in many Ford and Mazda vehicles.

For more about the Jaguar S-Type click on this link  http://en.wikipedia.org/wiki/Jaguar_S-Type 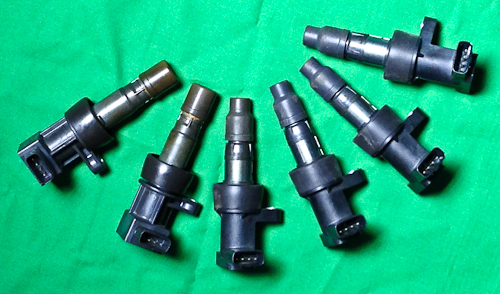 Six Ignition coil from our 2004 Jaguar S-Type. Note that 2 coils differ from the other 4. These had likely been replaced at some time in the past