Monday’s featured repair is a Wheel Bearing Replacement on a 2004 Oldsmobile Alero, brought to us from a client in Point Grey, Vancouver. 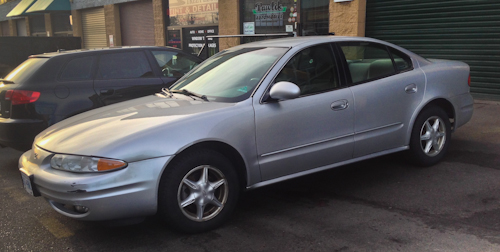 2004 Oldsmobile Alero. The final year that this iconic brand was manufactured.

Every car has a wheel bearing at each wheel and eventually they will all wear out. When is unpredicatable.

This 2004 Oldsmobile Alero uses a unitized hub and bearing assembly which also contains the ABS sensor. There is no maintenance required: you simply replace the unit when it wears out. How will you know if it’s worn out? There are usually only two ways: first is that the bearing gets noisy, which was the case with this vehicle; second there will be play in the wheel bearing, which is only noted when the wheel is lifted off the ground.

Some wheel bearings are serviceable and require the bearings to be repacked at regular intervals, usually between 50,000 to 100,000 kilometers. While these types of bearings were once the most common design they are now quite rare.

The Oldsmobile Alero is a fairly reliable car and shares the same drivetrain as many General Motors cars. This makes for plenty of available parts at reasonable prices.

For more about unitized wheel bearings click this link http://www.ntnamericas.com/en/products/wheel-hubs 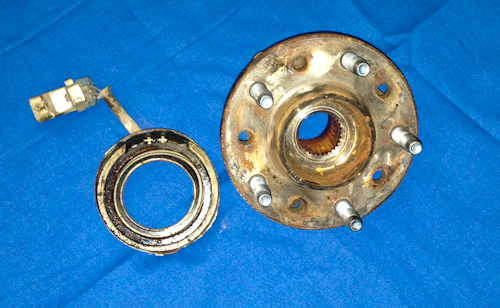 Unitized hub and wheel bearing as removed from Oldsmobile Alero. The ABS sensor is the unit on the left. This broke off of the bearing during removal.