Mark: Hi, it's Mark from Top Local. We're here with Bernie Pawlik, Pawlik Automotive in Vancouver. Vancouver's best auto service experience. 22 time winners of Best Auto Repair in Vancouver as voted by their customers. 22 times they've been selected and voted, which is pretty amazing. So they do a good job. How are you doing Bernie?

Mark: So 2005 BMW 325 that had window and brake problems. What was going on with this vehicle

Bernie: Yeah, so the owner of the vehicle had mentioned he'd put his left rear window down, it made a horrible clunking sound. Something seemed to shift or drop, and he was able to actually get the window back up. But it seemed, you know, there was something that wasn't working quite right with that window. Also it was due for service, a maintenance service and the ABS brake warning light was on as well.

Mark: Were these issues related?

Bernie: No. All, all separate issues. And we're going to talk about the window regulator and the ABS issue, both in this podcast, but yeah, not related. Completely separate issues.

Mark: So what was happening with the window?

Bernie: Yeah, so the window, as I mentioned, he put the window down, there was a clunk sound and you know, the window didn't quite go up straight when he was able to get it up and he wasn't able to put it down again, but it wasn't, you know, it wasn't working properly. So, that was basically the issue with the window on the left rear.

Mark: And what did you do to repair it?

Bernie: So basically the first step of course, is a diagnosis. And we removed the door panel from the left rear door, looked inside. We can see that the cable from the a window regulator was all slack on one side, which indicates the regulator is faulty. We did test the motor, it seemed to work fine. So our recommendation was basically to replace the window regulator.

We'll just have a look at some pictures right now while we're at it. So there's our 05 325 E46 series vehicle. And as far as pictures, let's go to the window regulator. 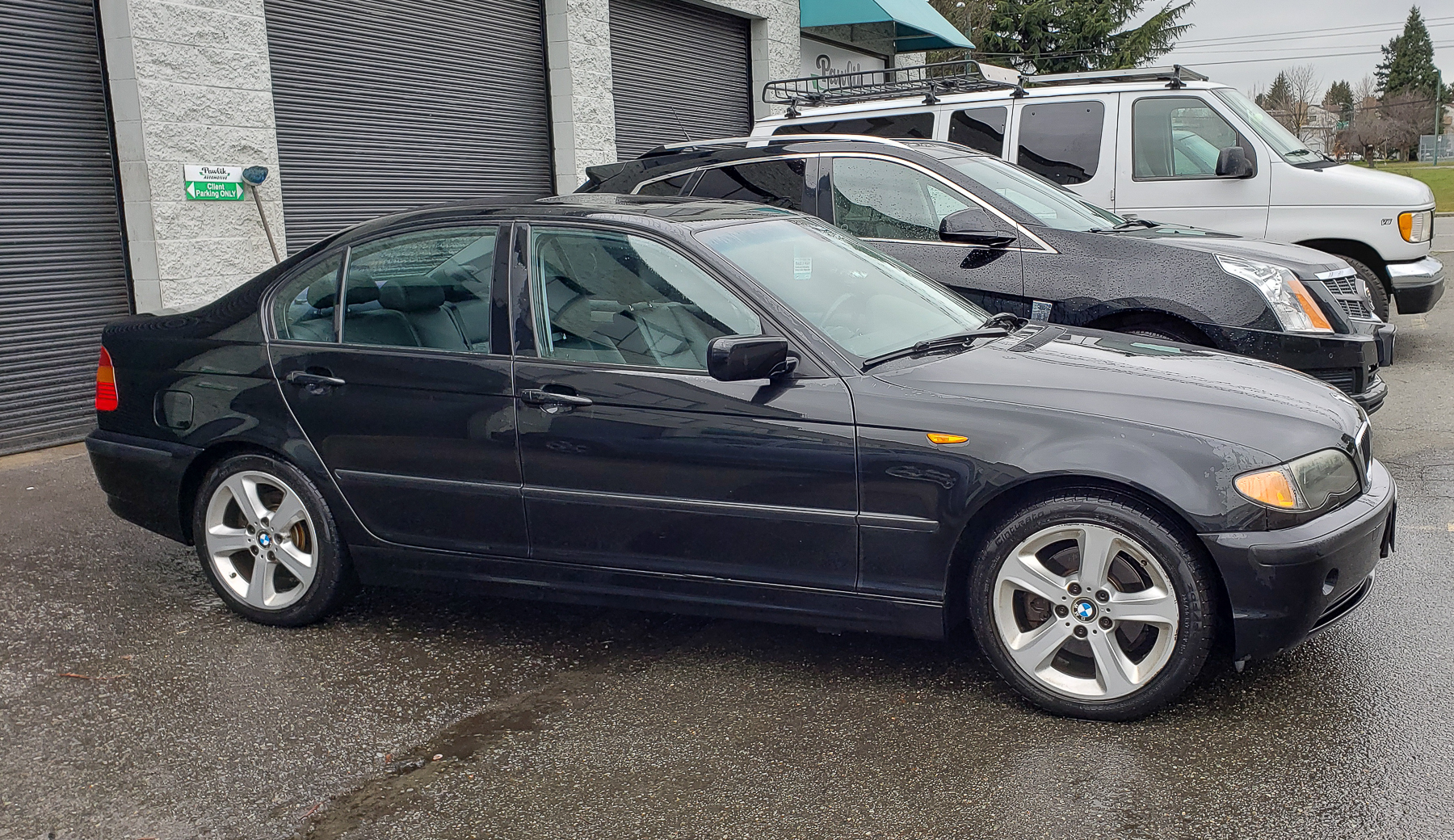 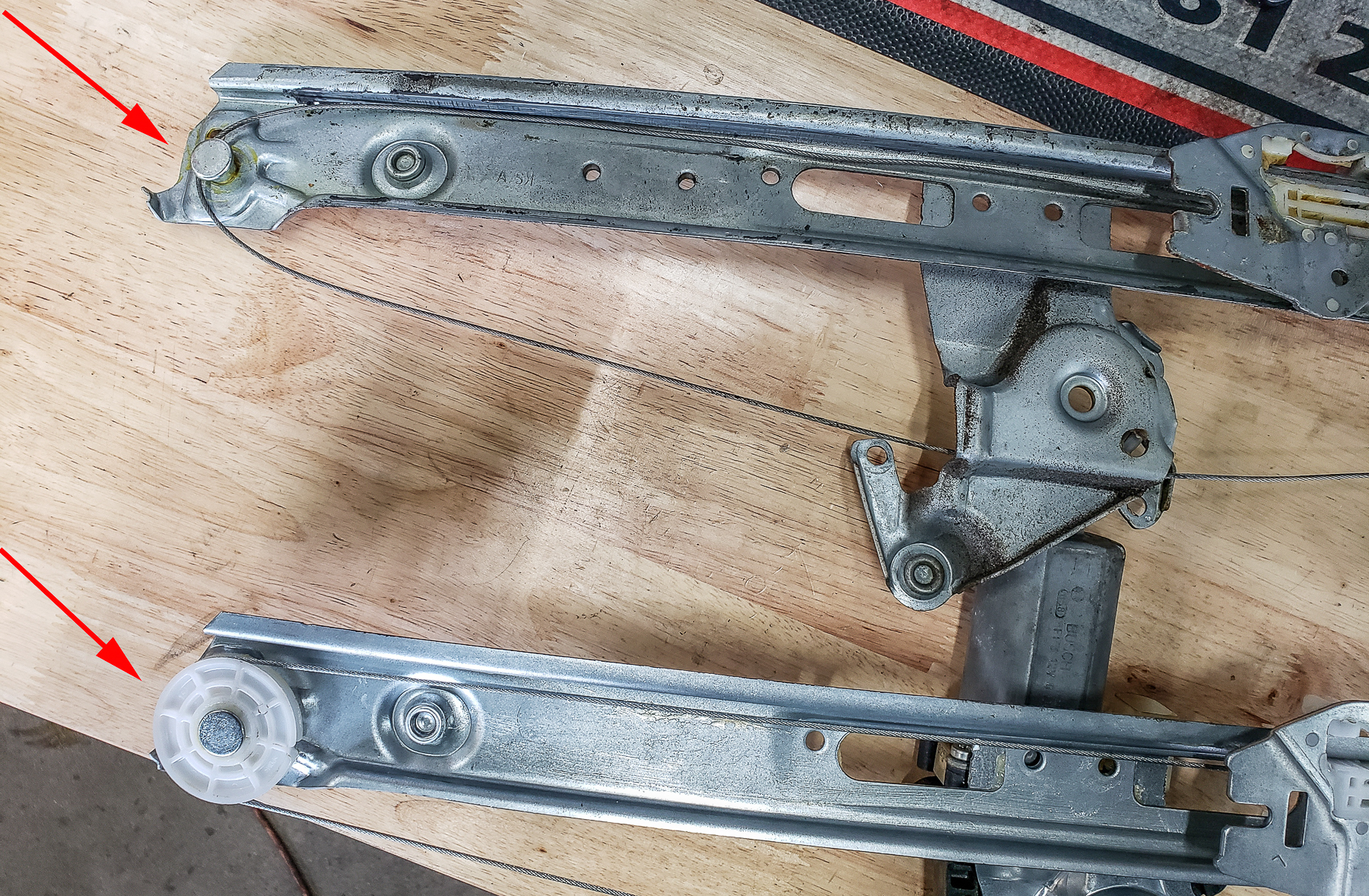 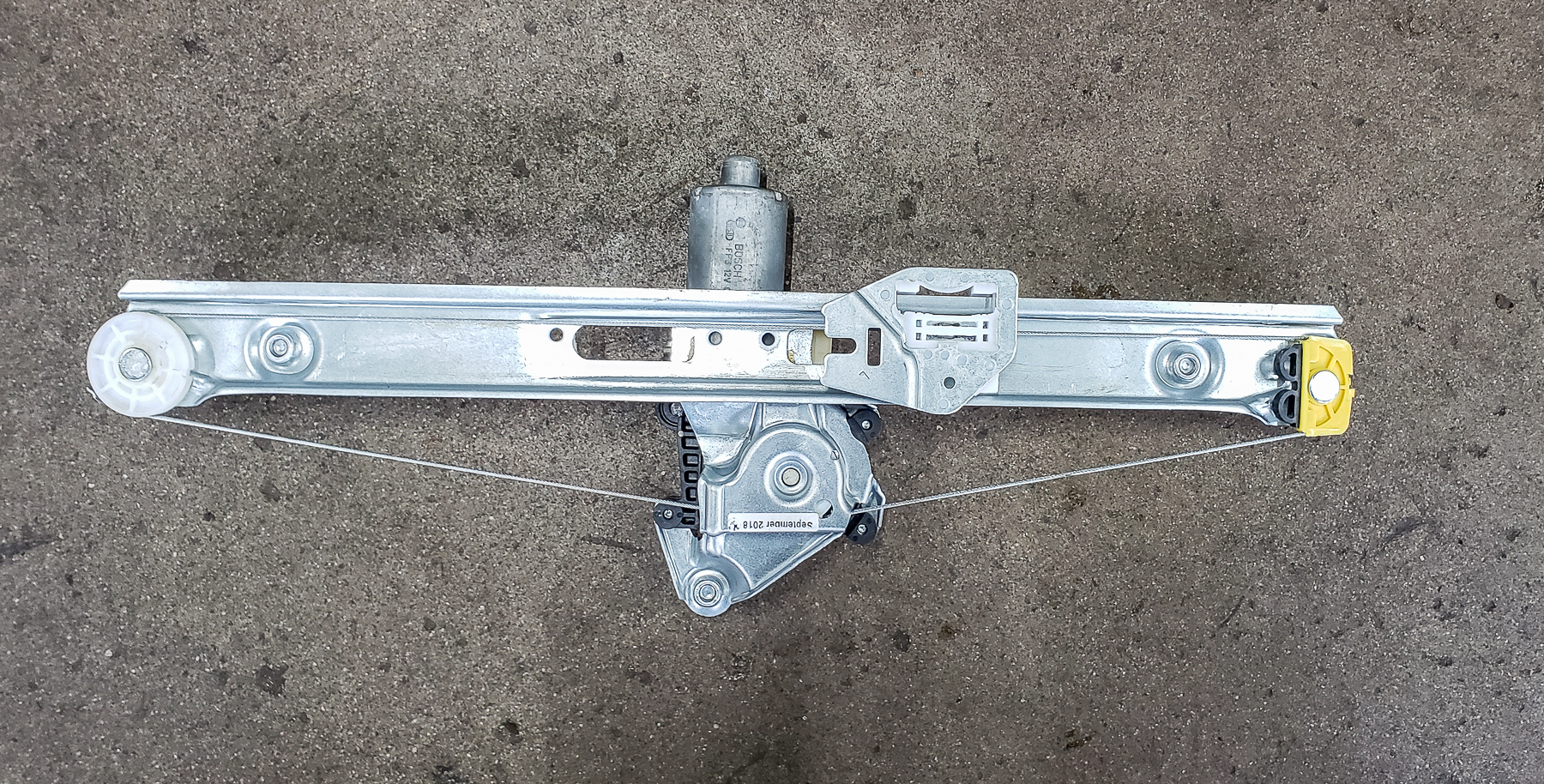 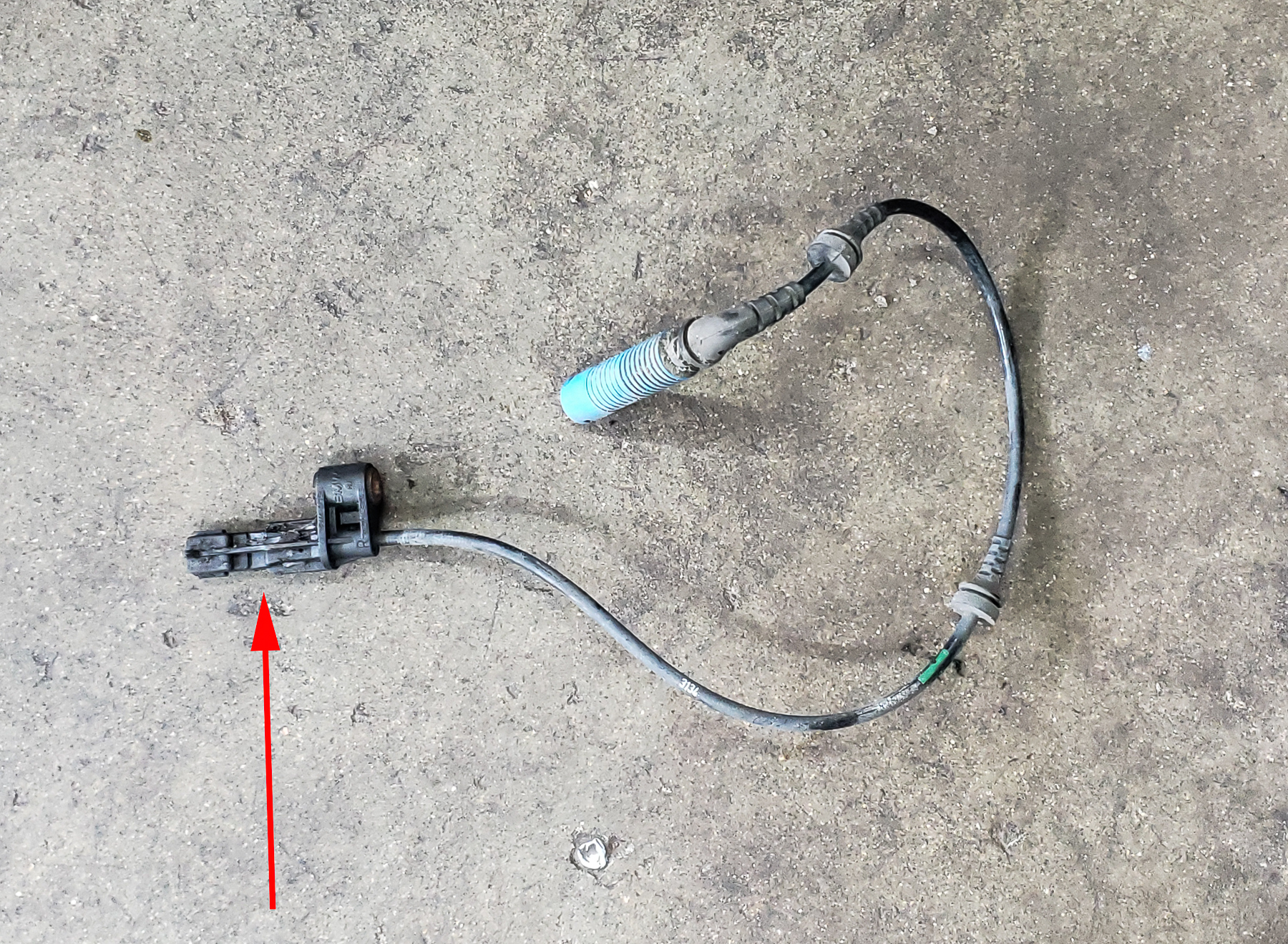 So these are the two window regulators. This is the new one that we installed. This is the old one here. You can see a distinct difference between this piece and this piece and that is a plastic pulley that's no longer in place on this particular one here. So that's basically what happened. The plastic pulley broke. The cable got slack. There was enough tightness in the cable where it would go up and down, but it wouldn't obviously work as well as it should and eventually it would have failed for certain.

This is a view of the new window regulator with the motor installed. We were able to transfer the motor over, which worked fine, but you can see the cable's tight. This is a piece that attaches to the window. So this moves up and down, this is mounted vertically inside the door. So that's how that operates.

Bernie: It does exactly. And the squareness in the frame is also due to the actual window sits in the mounts. Yeah. This also, if it's not sitting properly, will cause a window to sit on an angle or move up and down on an angle. Again, it depends on the design of the vehicle. This is a good simple design and actually works quite well. There's a lot of vehicles that have these cable designed regulators. Some of them are really complicated. They have cables and pulleys on both sides of the window. And those are even more of a nightmare when something breaks because the window goes all twisty and wonky. This is a pretty good straight forward simple design for cable regulator and pretty reliable too.

Mark: So what caused the pulley to break?

Bernie: Old age. You know it's plastic. We love plastic in this business, as I've said. You know, plastic, it doesn't last forever. Eventually just somehow wore out and broke. And you know, it's a 2005. That's what, a 14 year old car, so 15 year old car now. It's not unexpected that things would break at some point in time.

Mark: And was this a time consuming repair?

Bernie: Not really. It's not actually not too difficult. And it's actually pretty well built for repair. Some windows, some power windows can be an absolute nightmare. And this one's actually built pretty well. So BMW's are pretty good this way. At least in this type of model.

Mark: And what was happening with the ABS system?

Bernie: Yeah so the ABS. So that's a separate concern. So the warning light on the dash was on and there was no real issue in terms of the way the car braked. But what happens is when an ABS warning light's on, basically, normally shuts the ABS system off because the system detects a fault. So your brakes work as normal. And the only time that you would actually notice anything is when you go into a panic stop. And then the ABS system wouldn't be there.

Mark: And what procedures did you perform to diagnose what the problem might be?

Bernie: Yeah, so again, so for the ABS system, it's basically a scan tool diagnosis is where we start. So we scan the system. Look for trouble codes. We found a few. Most were related to the front right wheel speed sensor. So you know, from there road test. We can road test a vehicle and we can, on our scan tool, we can look at data and we can see what the readings of the wheel speed sensors are. So it'll actually tell us the speed of each wheel. The right front was giving us no reading. That's usually an indication that the sensor or there's something wrong with the wheel speed sensor, or sometimes a sensor ring will break in certain models of cars. But in the case of this vehicle, did a few further tests and found the actual sensor itself was defective.

I've got a picture of the wheel speed sensor. So that's the wheel speed sensor for the vehicle, the right front wheel. I mean all of them have a similar kind of look, but they are actually in this vehicle specific for each wheel and a this the part with the red arrow. This is the actual sensor that the bolts in onto the wheel. It's a little dark here, but there's a bolt goes through this piece here. This plastic piece fits in and the sensor, there's a ring, a tooth ring on the axle shaft. And as the teeth pass, the sensor can actually tell how fast the wheel is going, whether it's accelerating or decelerating.

It's actually extremely sensitive amount of data is calculated from this particular item. In a lot of BMWs the tire pressure monitoring system also works off the wheel speed sensors as well. So that might be a conversation for further podcasts. But it's, you know, nonetheless, that's how sensitive this whole system is. So this wire, you know, it's nicely shielded and the connector which connects to the rest of the wiring harness.

Mark: So are wheel speed sensors, do they fail commonly, like regularly or?

Bernie: Yeah. I think I've all the ABS issues we fix, and I'm talking about in sort of a broad spectrum of cars, the wheel speed sensor would be the most common item that we do fix. It's out in a hostile environment, you know, with moisture and rain and snow and salt and rust and you know, everything you can throw at it. Plus on the front wheels, of course the wheels are turning, you know, there was always movement and rotation. So the, these wires are under stress, all the time. So on the rear, they're definitely more stressed, but sorry, on the front they're more stressed, but we do replace rear ones as well. I mean they all go bad.

Mark: And is this a difficult repair?

Bernie: Well, this one wasn't too bad and surprisingly, I'll just go back to the picture again. Just the way the sensor was designed, like a lot of these things fit into a very tight bore like, you know, the hole in the actual wheel hub is very tight compared to the size of the sensor. And over time, rust and corrosion can build up and actually cause a sensor to seize up inside the bore so that it becomes difficult. But this one here there's a lot of room around it. It was just basically unbolt and it popped right out, which is really, it's a real godsend because they can be a real nightmare to repair sometimes, especially when they stick into the bore and you have to drill it out and pull it out and then you have to clean the bore out so the new one fits in properly. So that adds a lot of extra time, of course, costs to do. But, for this BMW, it's nice and easy. Well thought out. And actually in terms of replacement.

Mark: And how did everything work after the repair?

Bernie: Oh, it was good. Window good. ABS brake light off. System worked properly. So just like we like it.

Mark: So if you want repairs or service for your BMW in Vancouver, the guys to see are Pawlik Automotive, you can reach them at 604-327-7112 to book your appointment. You have to call and book ahead. They're busy. Or check out the website pawlikautomotive.com lots of articles on there. YouTube channel Pawlik Auto Repair. If you're enjoying the podcast, leave us a review on Apple podcast. That would be awesome and thanks so much for watching. Thanks, Bernie.

Bernie: Thanks, Mark. Thanks for watching. Thanks for listening and we always appreciate it.​