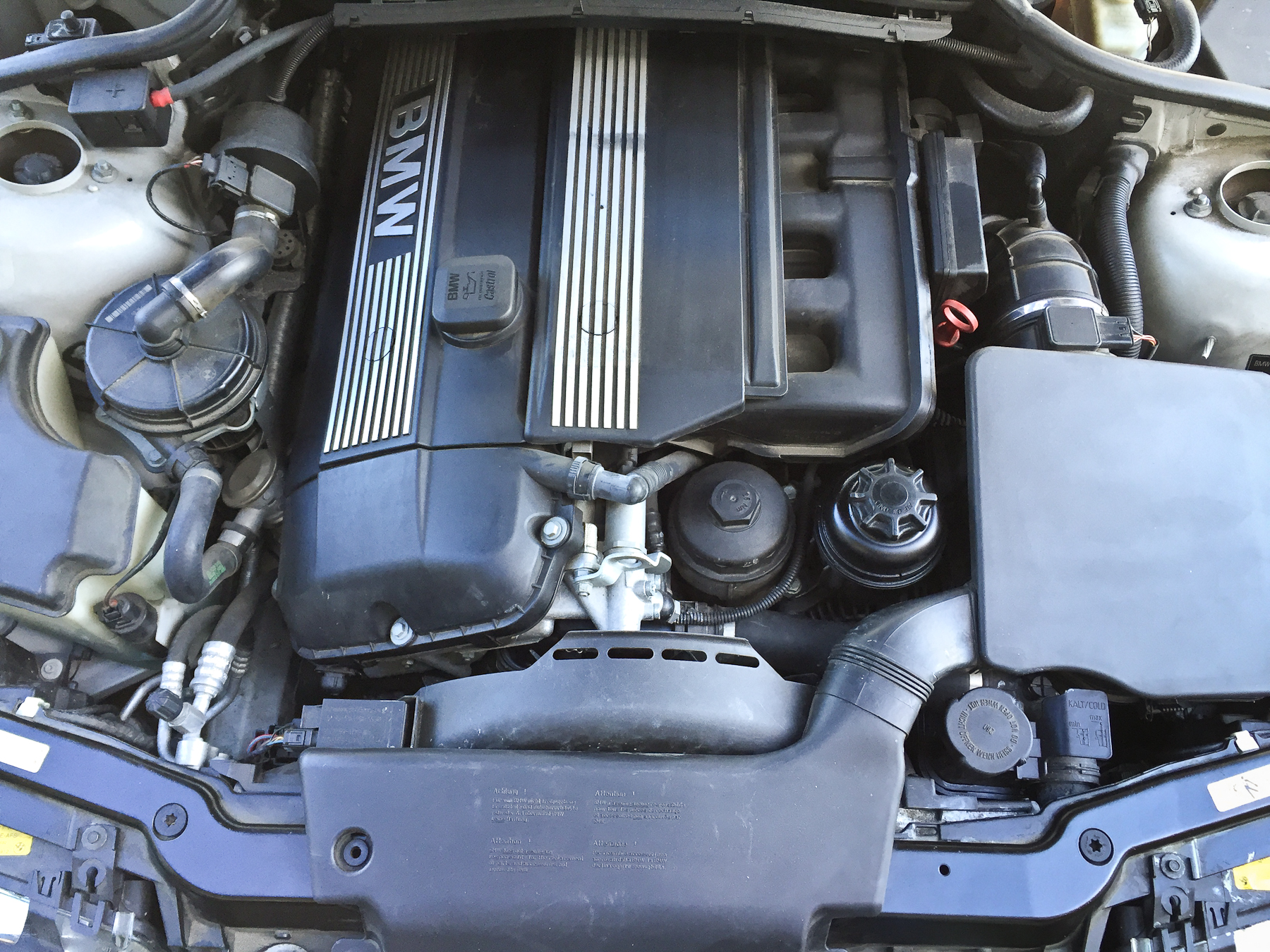 Engine compartment of 330ci - much of what you see is plastic

Bernie: Well this car came into our shop with quite a bad coolant leak, it actually was to the point where I think the owner was driving down the highway and the engine actually stopped running because it got pretty warm and shut down which is a good thing before it destroyed itself but yeah the main reason it came was for a coolant leak.

Mark: So I’m going to digress for a second, is there a reason why it would shut down like that, is there an electronic protection that would shut it off?

Bernie: I suspect that’s probably the case although I don’t know for sure having not driven the car, I mean a lot of cars if you overheat it to a certain degree it will actually, you know it will actually stop because it can’t physically run anymore so actually I’m not sure whether BMW has that capability; it would be a good thing because we do fix cars where people have overheated them to the point where they’ve cooked their engines so it’s not a good thing.

Mark: It’s not a good thing to do. So where was the coolant leak coming from?

Bernie: The coolant leak was coming from the coolant overflow bottle and the bottle basically spit suddenly and this is a pretty common issue that we see in these vehicles so, yeah I can share a couple photos, actually hang on, get to the photo share thing, just a second here, here we go. There’s the BMW engine compartment with lots of plastic pieces and before we look at this I’ll just show, this is the coolant overflow bottle, it was cracked, this sits on the side of the radiator, the red arrow points to a big long crack along the length of the bottle and we do see these from time to time; it’s fairly frequent once the car gets a little older, plastic, it’s brittle, it’s under a lot of stress. The BMW’s there a lot of plastic in the engine compartment, this is a view of the top of the engine and pretty much everything black you see there is made of plastic with the exception of a piece that runs along the sort of lower portion of the photo, a long piece that runs from left to right, that’s a metal piece painted black but pretty much everything else you’re looking at in black is plastic. There’s the intake manifold is on the right near the back, the big BMW word, that’s the valve cover area, that’s all plastic and at the front is the radiator, it’s kind of buried and hidden but to the right you can see a sort of round piece with, right sort of lower corner that’s where the radiator cap is and the overflow bottle we replaced is down there. So these are the many of the plastic pieces that they have on this car, so I will stop the sharing, come back and talk. 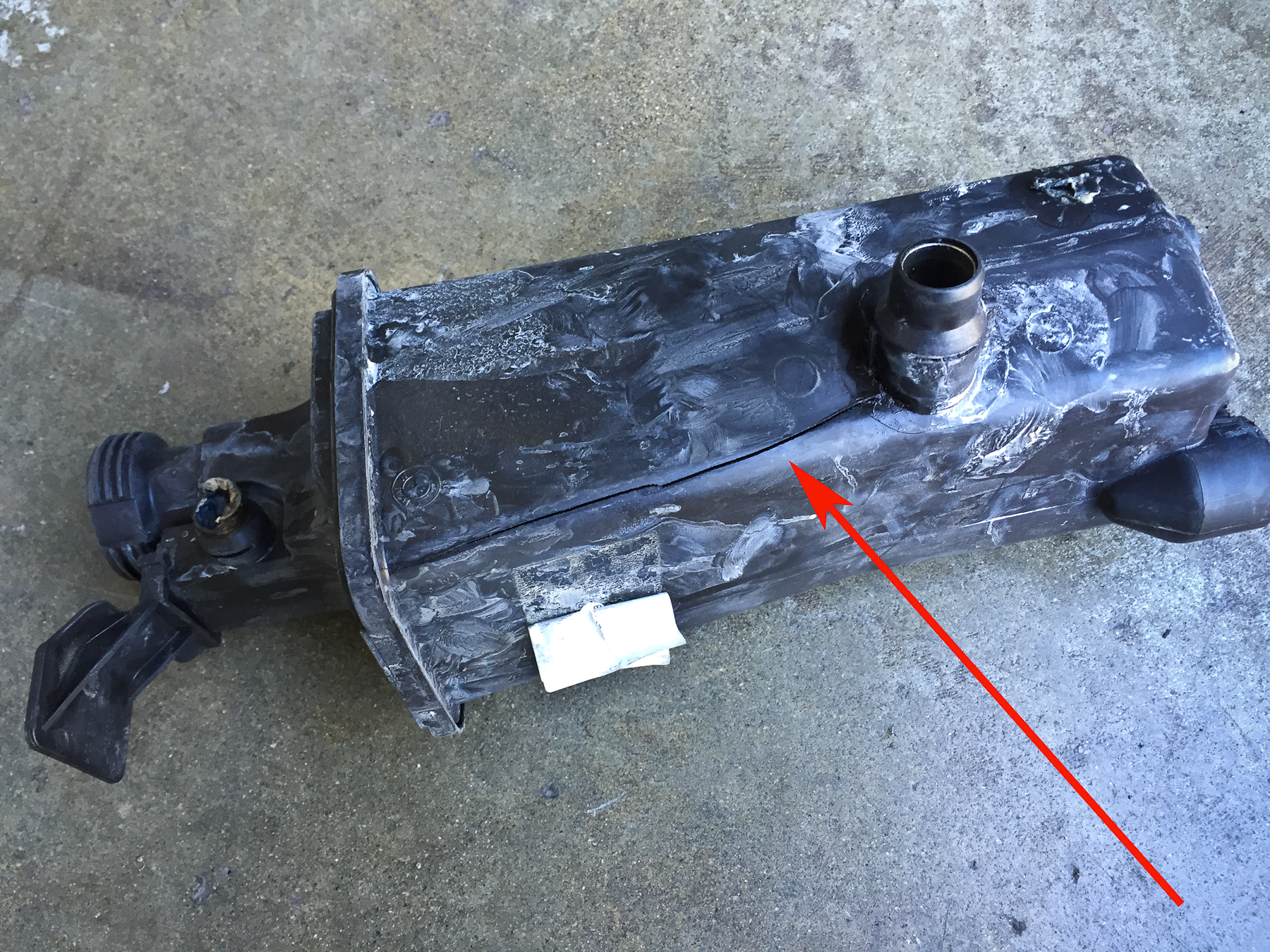 Mark: So all of this plastic cause engines are hot, plastic doesn’t do all that great with heat, repeated cooling so it seems like not a great idea why are they using so much of it?

Bernie: I think weight reduction is probably the biggest reason but plastic is also highly moldable, you can, you can mold it into any shape so it’s helpful for certain things that require flow of liquids, flow of air and you know it I think it’s increasingly cheaper to work with than it used to be at one time but I think weight is the primary reason. I mean in all fairness plastic nowadays isn’t what it used to be 30 or 40 years ago where you couldn’t even make anything, I understand that they even have plastic pistons in engines although I’ve never seen one but I think for high level racing they’re actually used or its experimental anyways, but for a lot of parts they work fine but there’s only certain lifespan and plastic unfortunately tends to fail rather suddenly, we have like this coolant overflow bottle, basically we had this vehicle actually in for service the day before it came back for this leak and the thermostat housing was leaking, did a number of repairs on the car and I mean unfortunately the car came back in the next day with this big coolant leak. The day before we replaced the thermostat housing, we pressure tested the cooling system, there wasn’t a drip of coolant or leak coming out, next night he’s out driving on the highway, the bottle splits and you know without any warnings so almost with the BMW when you get 10 years old it’s not that preventative maintenance to just start changing some of the plastic parts, the radiator has plastic, the overflow bottle is plastic of course. A lot of the coolant hoses even have plastic ends so it’s great, you can clip these pieces together you know, from a manufacturing perspective it’s amazing but once it gets a little older like after like you said a lot of heating and cooling cycles plastic gets brittle and breaks.

Mark: So are there metal replacements available for any of these parts?

Bernie: Some of them there is, not for the radiator, not for the overflow bottle or the hoses for that matter but there are for some models there are thermostat houses that are available not for those newer models though but it’s really the older ones you can get metal thermostat housings, water pumps are one thing, water pumps themselves are made of metal but the impeller, the blade that turns inside the water pump it’s a lot of European cars use plastic impellers, we’ve even seen them on medium sized Isuzu trucks as well which is kind of shocking but the thing about plastic impellers is they just crack and break without warning so you have a water pump it looks on the outside it’s working perfectly well but it isn’t pumping any water so with these we always replace with metal impellers so again the reason they use plastic on these is just simply weight production but they fail you know and that’s without warning so. 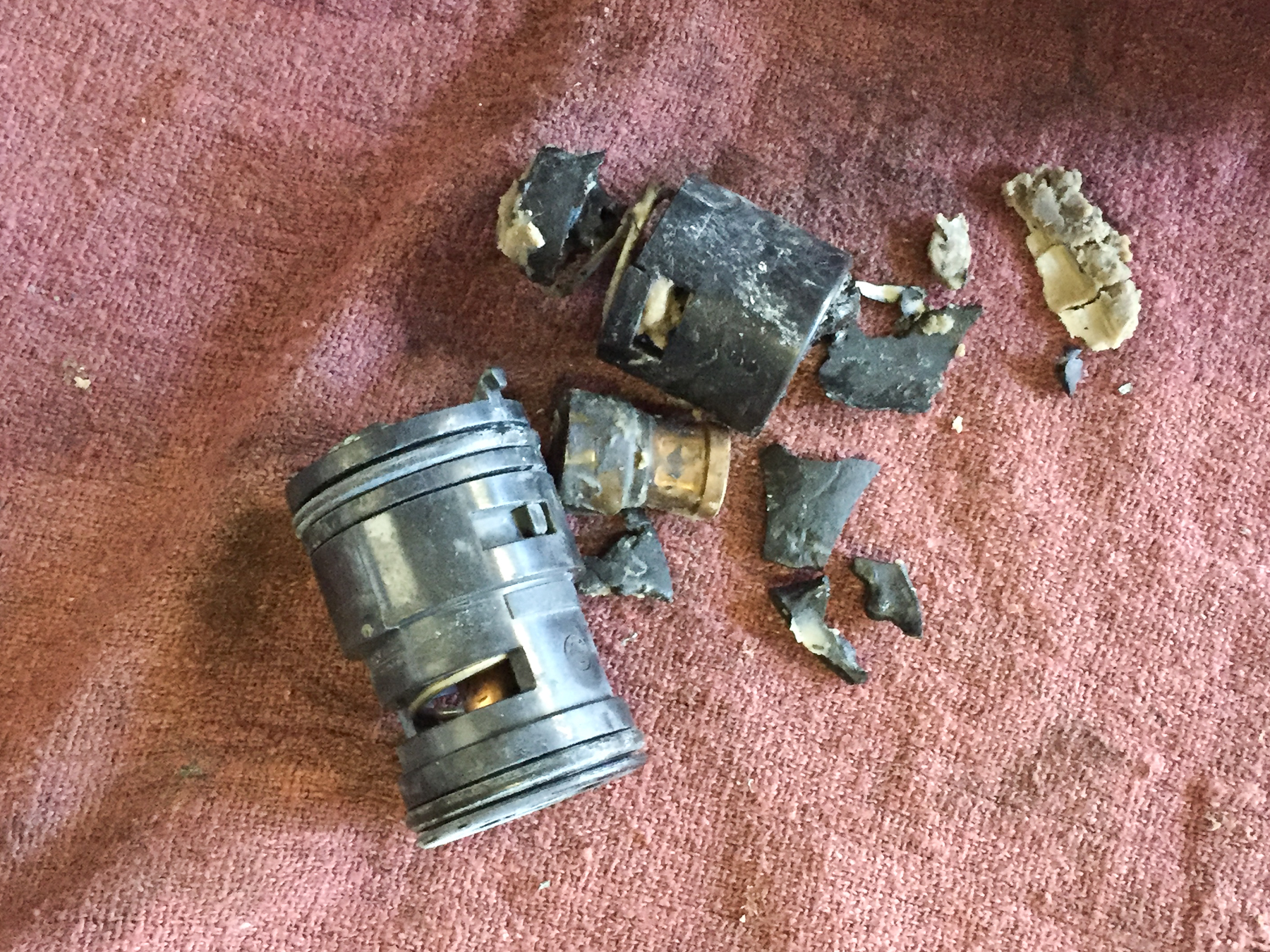 Automatic Transmission Thermostat: this part is broken and this is typically how they look when replacing the coolant tank. It sits in the bottom of the tank.

Mark: How was the customer, you you’ve done a bunch of work, their car basically broke down on the next day, what would, what happened with that.

Bernie: Well for us it’s always highly embarrassing because the kind of work we try to do, with everything we do we like to be very thorough and make sure we’ve covered everything you know without of course selling the person a brand new car when we do our repair, by doing it the most reasonable way you know, it’s rather irritating for the customer and for us when the car gets towed back a day later. You know what we did for this customer, we replaced parts, we didn’t charge him any labour, you know it was a few hours’ worth of work that we did for no charge, we did charge him for the parts, it wasn’t our fault that failed but me I’m just interested in customers being happy with what we do so we replaced the parts and took the car out for a very long road test to make sure there wasn’t some other issue causing the vehicle to shut off suddenly, so we’re pretty satisfied, we inspected everything and it all looked to be pretty good but this is the kind of thing we do in certain cases where it may not be our fault but we figure the car just been in, spent a bunch of money, want to just do a little extra to make them happy.

Mark: So if you’re looking for a fair and useful and honest mechanic, honest maintenance place for your high end vehicle, your low end vehicle, doesn’t matter what kind of vehicle it is from diesel to high end Mercedes, these guys repair it all Pawlik Automotive in Vancouver. Give them a call to book 604-327-7112 or check out their website pawlikautomotive.com. Thanks Bernie.