Mark: Hi, it's Mark from TLR. I'm here with Bernie Pawlik, Pawlik Automotive in Vancouver. Vancouver's best auto service experience. 24 time winners of best auto repair in Vancouver as voted by their customers. And we're going to talk about a Jeep Grand Cherokee today. How are you doing Bernie?

Mark: So 2005 Jeep Grand Cherokee had a problem with the front end. What was going on with this vehicle?

Bernie: The owner of the vehicle actually brought it into us for A maintenance service or oil change and basic inspection. Along with some oil leak diagnostics, we actually done some previous oil leak diagnosis on the vehicle. There was still some leakage. So he wanted to figure out what was going on with that and fix that. So that's why he came in. However, when Nigel, our technician who was working on the vehicle, drove it and he heard this very loud thunking noise in the front end of the vehicle, like extremely loud. So he figured there's something worth looking at there, some serious going on.

Mark: So you guys dug in, what was causing the noise?

Bernie: Yeah. So Nigel had a look underneath and kind of wiggled a few things around found that the  mount on the rear end of the differential was completely worn out, causing a huge amount of play. And I'll show a video in a few minutes which illustrates perfectly what was happening.

Mark: So what would cause that mount to wear? Aren't they supposed to stay in place for a really long time?

Bernie: Well, they are, but it is a rubber mount it's allowed to have a bit of movement. So, you know, over time, movement amplifies and eventually the mount tears and maybe they could have made it tougher. But there's always, I think the manufacturers, they always try to balance the comfort ride of the vehicle versus durability. And so sometimes I'll put a softer rubber bushing on a control arm, which wears out faster, but there's a more comfortable ride to the vehicle. So it's kind of a balance and compromise, but I'd say just wear and tear, old age is kind of what's caused it. It's a 2005 Jeep that makes it 17 years old. So it's had a bit of usage.

Mark: So what's involved in repairing the mount, the broken mount?

So I didn't do an after video, but basically that should not be movable. That's actually with a hand grabbing the differential and just pushing it up and down. So clearly a lot of wear and definitely the cause of the loud thunk. 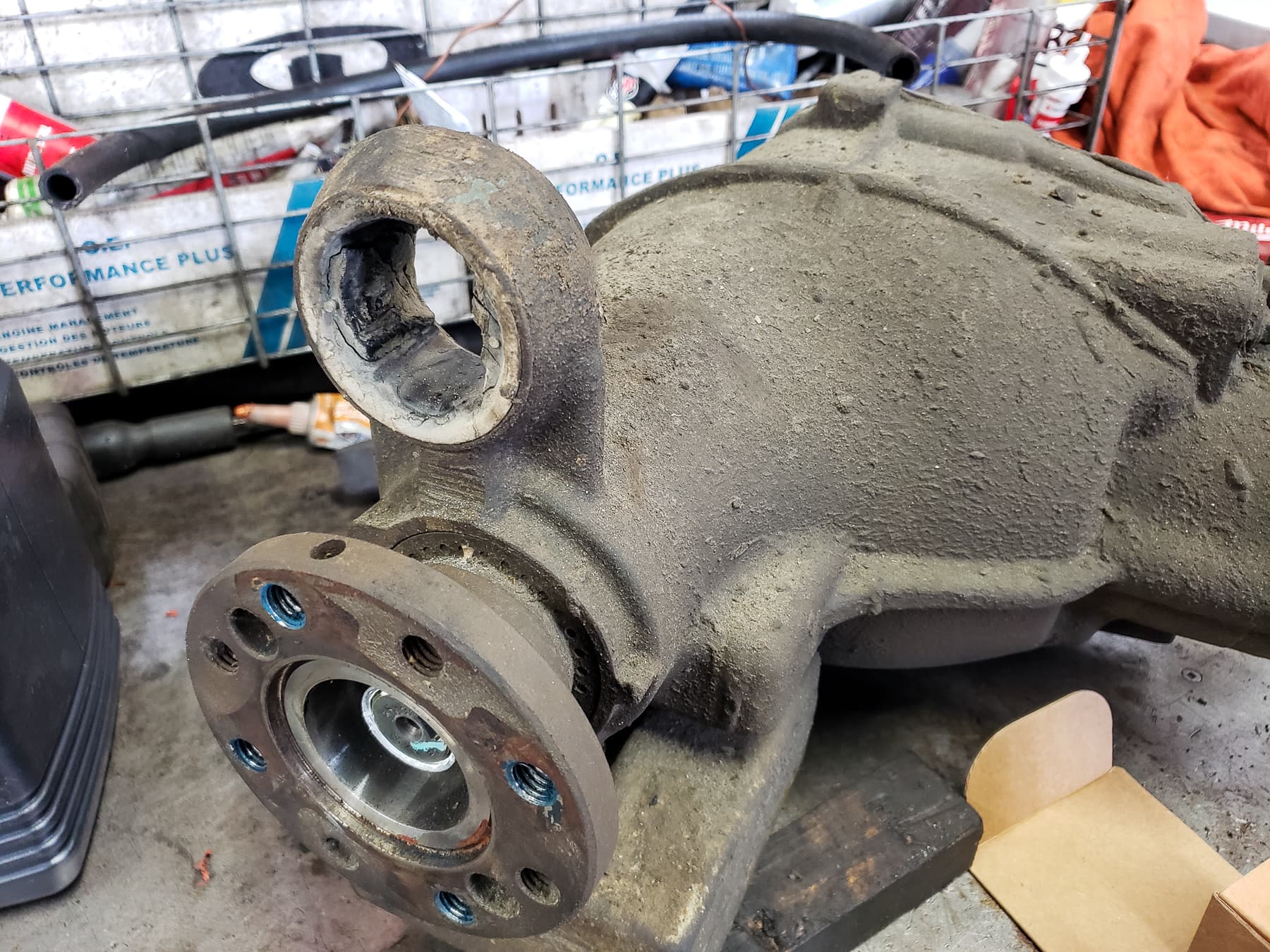 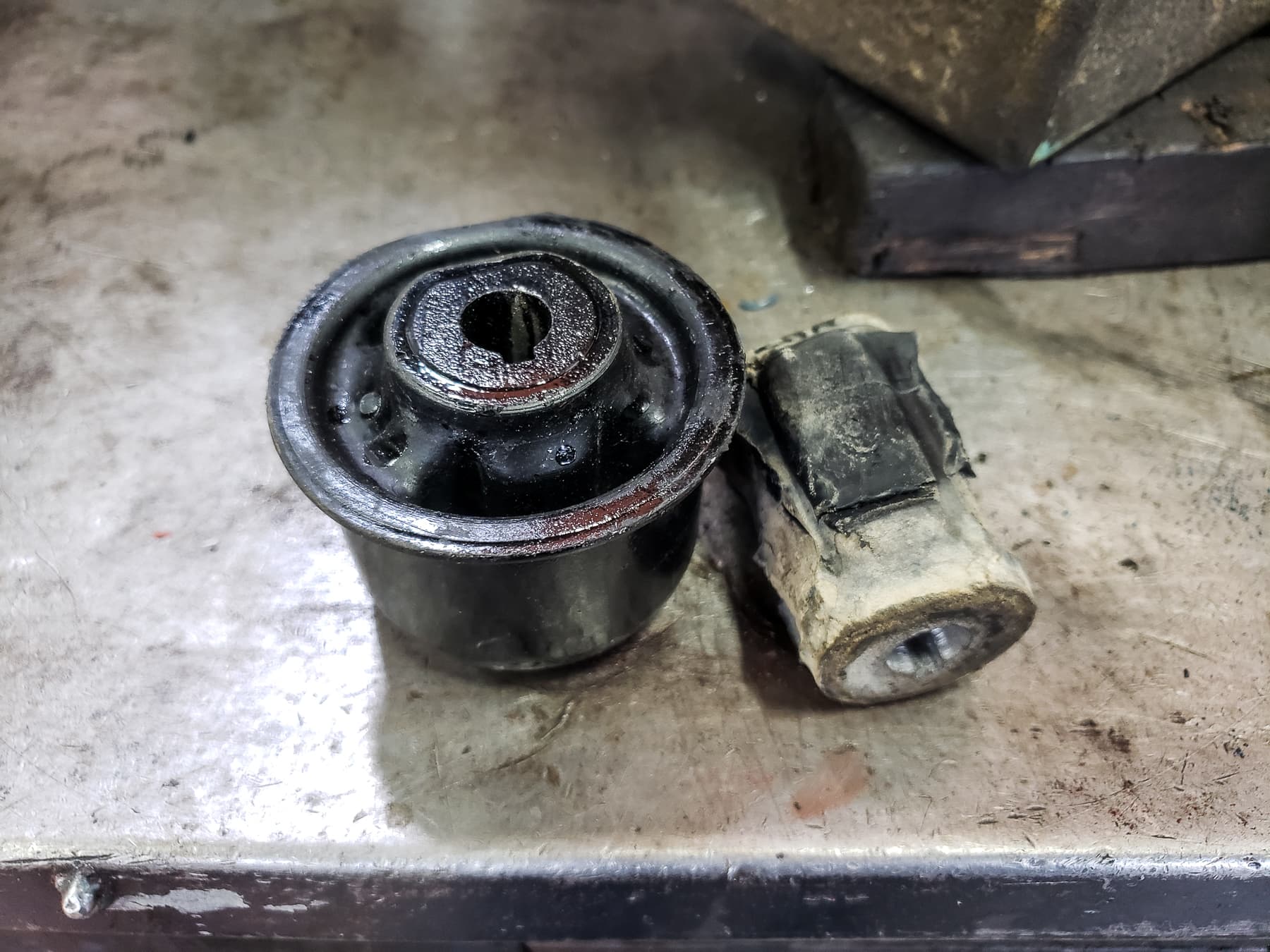 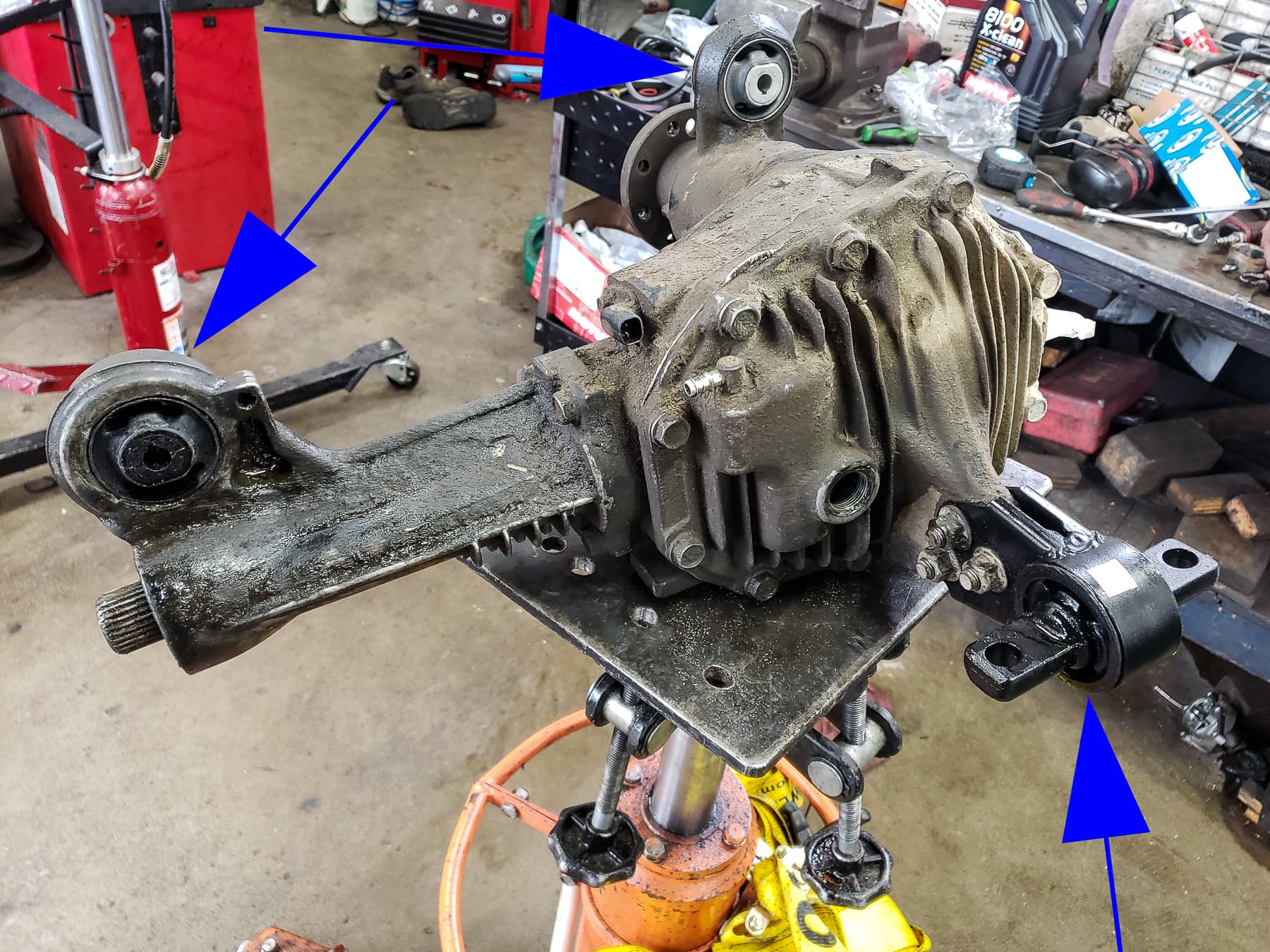 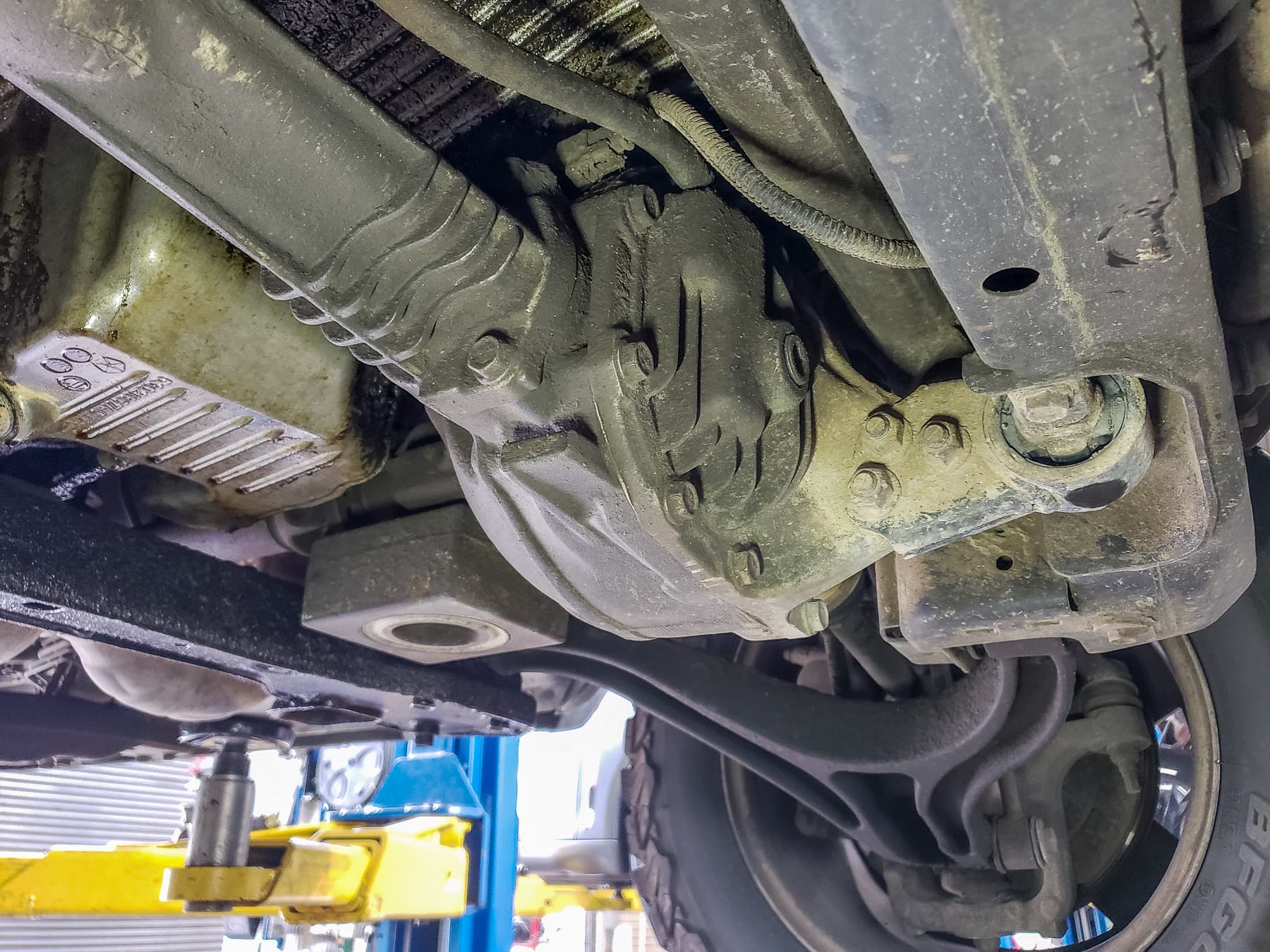 And I guess, you know, from an engineering perspective, they want a little bit of cushioning. It's a more comfortable drive, less harshness. But of course, if it was, you know, solidly mounted, it would never wear out. But it would create a lot more of a rough feel to the vehicle.

There's the differential. There are three mounts and we did actually replace all of them. So there's the front one that was completely worn out, brand new. The rear mount, sorry, hang on I'm trying to think, no, this is the upper mount. This is the one that was worn out.

So you can see the sort of solid pieces here and the air gaps here. This is the right side of the mount, and then there's a front mount here, which is a bolt on piece.  One more picture. There's the differential before we replaced it, mounted in the vehicle.

So you can see the front mount is bolted in here. Then the other mount would have been up in this corner here and then the worn out mount buried away up in the frame of the vehicle. So there's our show for the day.

Mark: So how common of an issue is this on Jeeps?

Mark: I guess it depends on how they're used too, if something's been off-road an awful lot and getting pounded a lot, up and down, over rocks, et cetera. It's going to have a little bit faster wear than something that's just been driven on the highway.

Bernie: Absolutely. And most of these vehicles, you know, most people who drive these vehicles most SUV's, they never even get off road or maybe the odd little, you know, light gravel road, but yeah, for people who get out and use them a lot, this is going to wear these a lot faster. And you know, not that it's a bad thing. I mean, it's just a normal part of wear and tear with this design a vehicle. But yeah, certainly if you're just driving on the highway and using it gently, you know, these will not wear that fast.

Mark: Was there anything else to replace other than the three mounts that you changed?

Bernie: That was all we did. That's all it needed to be done on this particular job. We did change the differential fluid while we had it out as well. Some of it did drain out as we took the axles out and it was a good time to do a full fluid change. So we did do that.

Mark: Anything that a Jeep owner can do to prevent this kind of wear and tear to prevent these mounts from wearing out?

Bernie: Well, I think we just talked briefly about usage. And I think, you know, if you're going to accelerate full throttle every time at a light, you're going to wear stuff out, probably your engine mounts worse than the diff mounts.

But I think the key is just to, you know, drive it with a bit of gentleness. If you're off road, you know, don't go flying down the road and flying over bumps, you know, just go a little gentler. But other than that, I mean, things will wear as they wear. There's not much you can do with these are just a solid piece and they'll just do what they do.

Mark: And were there any other repairs on this Jeep at this service?

Bernie: Yeah, actually the engine oil pan was leaking. So we replaced the gasket and actually having the differential out, made that a little bit of an easier job because the differential's in the way of the oil pan. Also the radiator was leaking as well. So we replaced that too, but those two jobs are completely different story. We've probably done a podcast on Jeep radiator leaks. They're kind of complicated to replace in these vehicles. So I think we did one at some point in the past. Maybe it's time to do another one some time soon, but yeah, that was it. And an A service, a basic oil change, A service.

Mark: How are Jeep Grand Cherokees for reliability?

Bernie: Well, they're kind of up and down. I'd say they're not quite as reliable as a Toyota Four Runner would be, but you know, you pay a lot less for them. I think they're pretty good. You can go places with them. A few more things go wrong. I think this 05 model year is pretty good engine wise, you know, we're starting to see some issues with camshaft and lifter wears in the V8s of the sort of 2010 and up models. These don't seem to have that kind of issue.

You know, the diesels are, you know, they're a category of their own. What these to the mid 2000 Cherokees, and there's a lot that goes on with those. They are kind of like the, they're a Mercedes diesel. So they have the issues. But there's a few things that were out on them and some of them get used pretty well, but you know, I think they're pretty good vehicle. If you're looking for a good off-road vehicle, I think they're really good.

Mark: If you're in Vancouver and you need some service on your Jeep, the guys to call are Pawlik Automotive. You can reach them by phone at (604) 327-7112 to book your appointment. You can book online on their website pawlikautomotive.com. And also on there, we've got hundreds, no exaggeration hundreds of videos on all makes and models and types of repairs. Check out our YouTube channel. Pawlik Auto Repair, same story, nine years of doing this. We're getting we're approaching a thousand videos. Bernie, thanks so much. Thanks so much for watching and listening. We really appreciate it. Thanks Bernie.

Bernie: Thank you Mark and thanks for watching.