Mark: Hi, it's Mark from TLR. I'm here with Bernie Pawlik, Pawlik Automotive in Vancouver. Vancouver's best auto service experience in Vancouver, BC, Canada. 24 time winners of best auto repair in Vancouver as voted by their customers. We're talking cars. How are you doing Bernie?

Mark: So today's victim 2005 Lexus GX470. There was a timing belt replacement for this huge SUV. What was going on with this?

Bernie: Yeah. So this vehicle was basically due for timing belt replacement. The owner brought the vehicle in. So we proceeded to do that.

Mark: Was there any kind of indication that there was something wrong with the belt?

Bernie: No, nothing wrong with it actually, just wanted to do it based on the time of the vehicle, the odometer at about 91,000 kilometres on it.

So it was not actually due by mileage yet, but you know, certainly by time this vehicle is now 16 years old, in great shape by the way, it's very low mileage for a vehicle like this. But yeah, it was time to do the belt from point of view of preventing anything from breaking.

Mark: What's the replacement interval for timing belts on this particular vehicle?

Bernie: Yeah, so on this vehicle, it's about 90,000 miles. For some reason my kilometre calculator isn't working right now, but I think that's somewhere in a 150,000 kilometres, somewhere around there, 150, 160. So you know, it's due around that. These are really robust belts. And so they will generally last quite a lot longer than the service interval, but I wouldn't recommend you do it because if it breaks, I'm not giving any advice here to leave it longer. I think it's always should be replaced, but they're just much more reliable timing belts in the, I mean, I'm working on cars for a long time.

They used to be these skinny little belts that had square teeth. And they evolved into curved tooth belts with that they're much wider. You can actually look at a couple of pictures right now and it kind of gives you an idea of what the belt looks like. 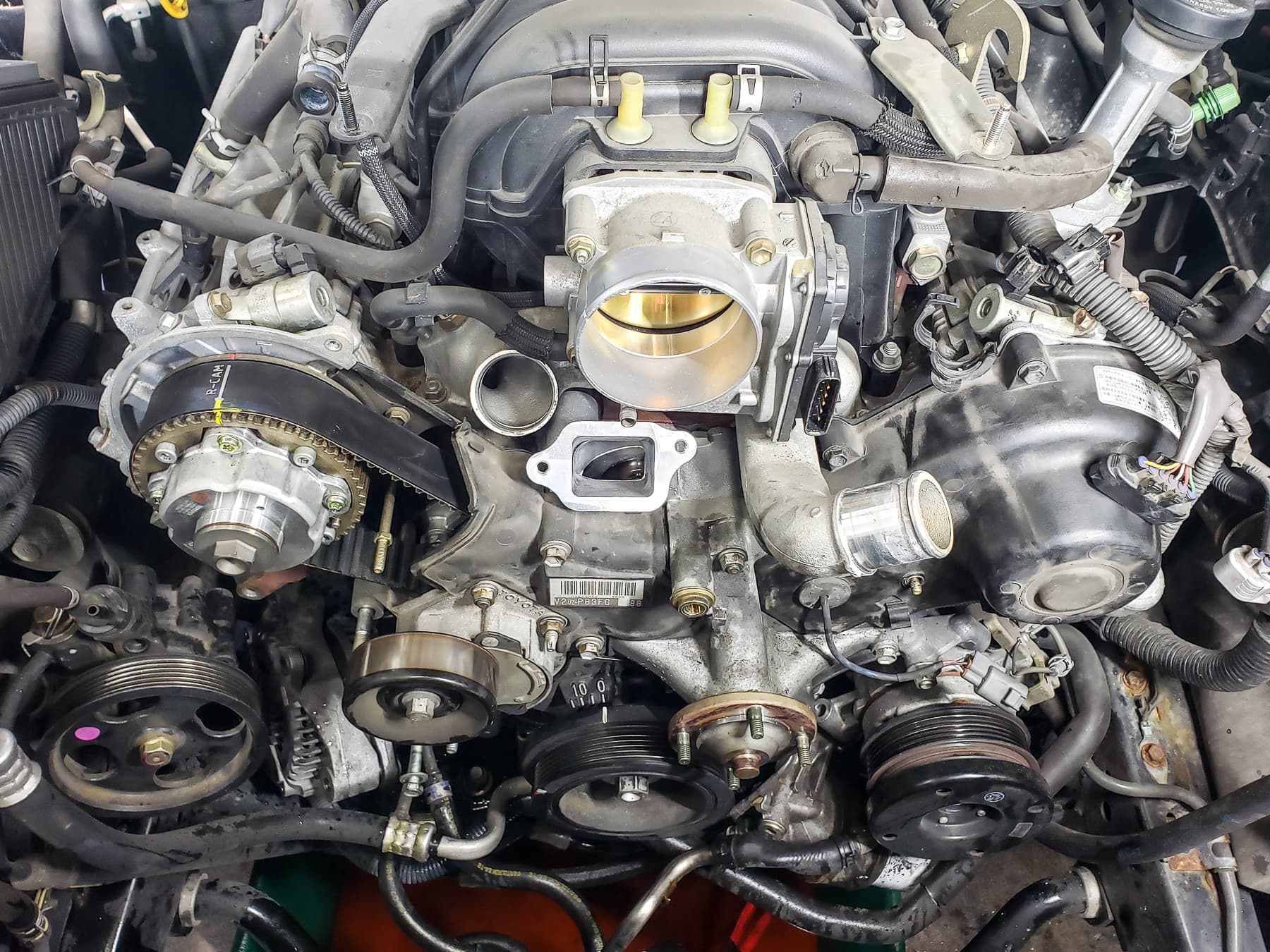 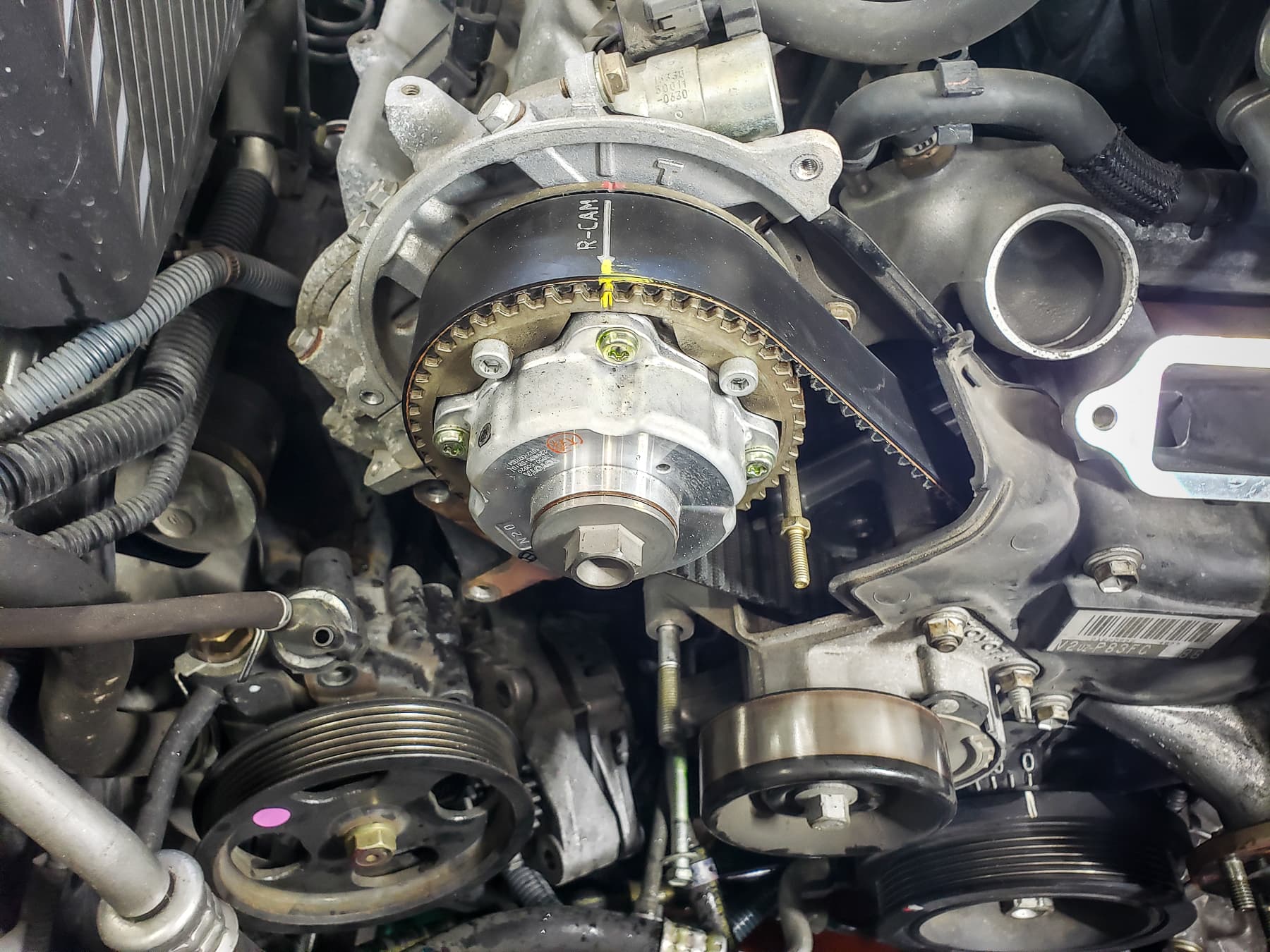 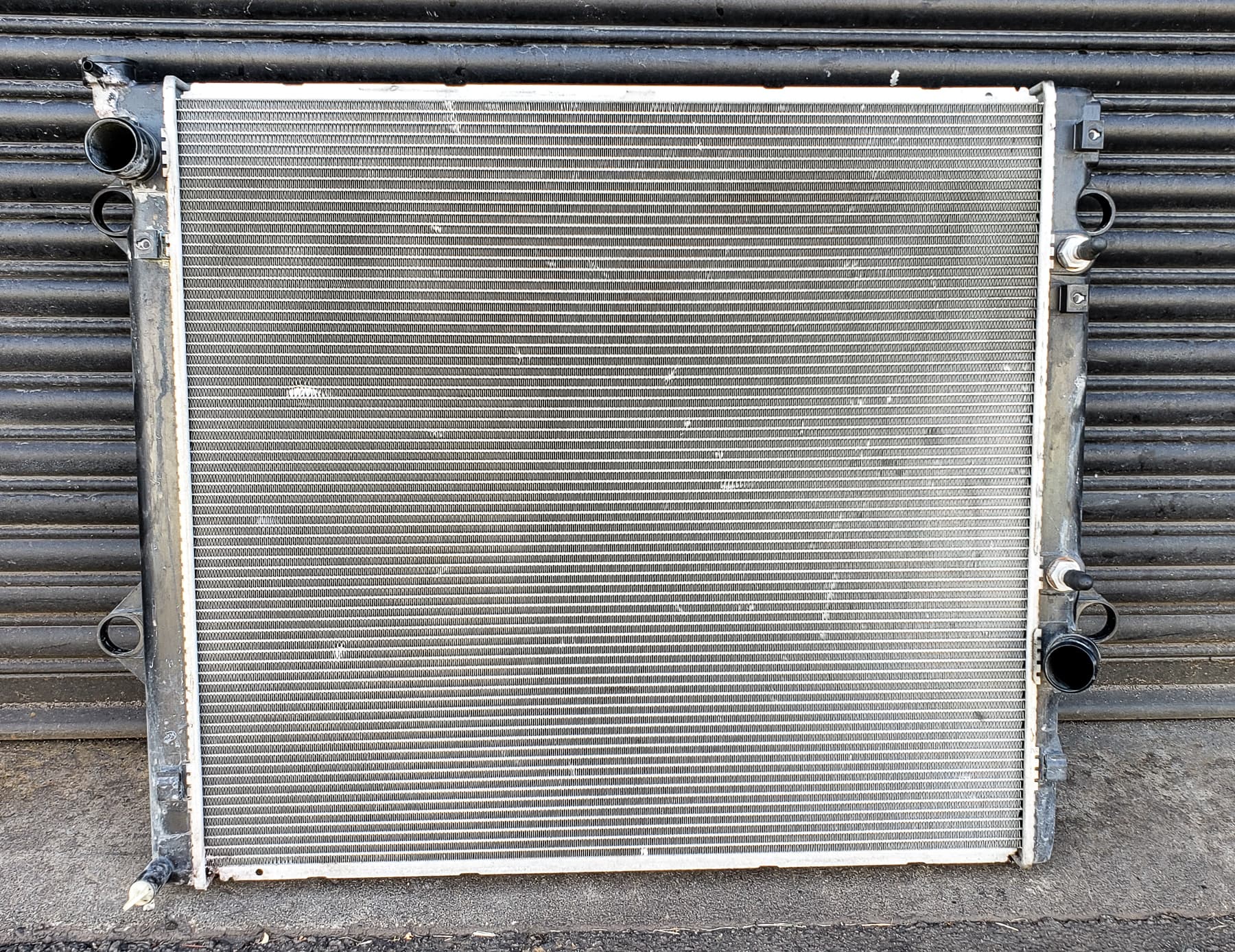 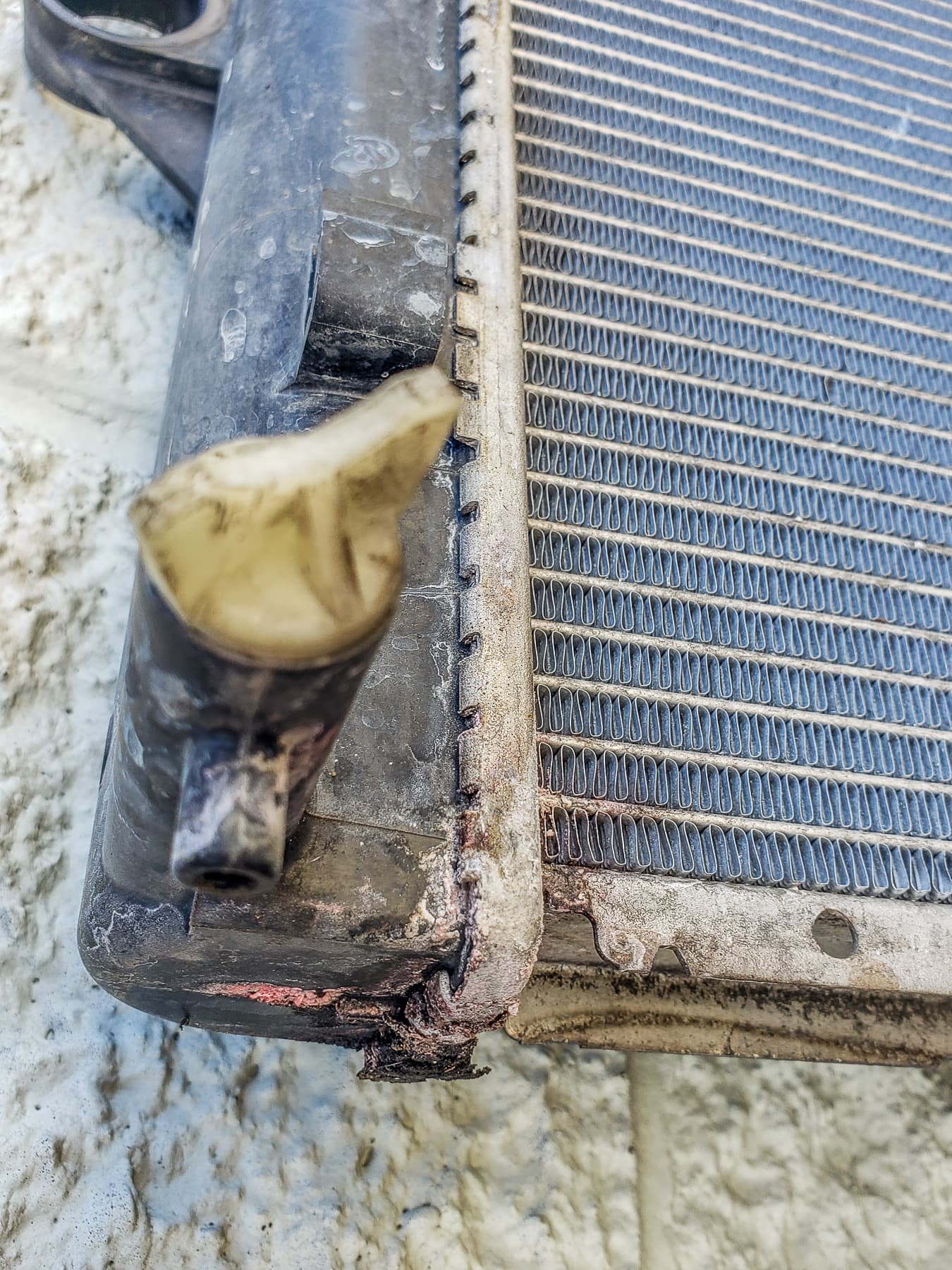 So there's a view of the front of the engine. This is actually the new timing belt installed. I didn't take pictures all the way through the process, but this is one of the cam shaft covers back on. This is the cover removed on this side. So you can see the belt in here, but it's quite a wide belt, well over an inch wide.

And as I was saying, like in the olden days, they were much thinner and they never lasted as long, but manufacturers got smart. They made them more reliable, with less frequent replacement.

Bernie: It's a V8. very good reliable engine. I don't normally say too many bad things about Toyota's they eventually they'll well, it's a Lexus, but still a Toyota. Here's another closeup view. This is the variable valve timing actuator.

And there's the belt. You can see the belt kind of in there. As I said, these are with all the covers installed, but power steering pump is kind of loose here. You can see it's kind of sitting on an angle. So things are not fully back together, but at least it gives a view of the engine compartment.

Mark: What else did you replace with the timing belt?

Bernie: Well, the water pump for one. This is a view of the water pump. We also changed the tensioners and most of the time we change the front engine oil seals as well because they tend to leak and cause problems. But we don't on all vehicles nowadays.

It used to be a one-time. By the time your timing belt was worn out. Your oil seals were usually leaking oil, but again manufacturers make them out of much better materials. So they tend to be very durable. Sometimes lasting I don't want to say the life of the car, whatever that is, but they may last for decades without failing.

Whereas in the olden days of seals, sometimes we'd take them out and they'd be hard as hockey pucks. They'd be leaking oil all over the place. Anyways, the water pump was one item we replaced. This is a weep hole. This prevents coolant from actually running onto the timing belt.

It goes through a passageway and can run out, but you can see this festering of pink here, there's cooling that's been leaking. Not at any large rate, but some coolant has leaked and with this kind of mileage, I mean, not doing the water pump is kind of a crazy thing, because it will fail for sure over the next while.

Mark: So this was another issue. Was there any other issues?

Bernie: Yeah, so I was going to say you know, like the water pump, to us it's a standard job. Timing belt, oil seals to a certain degree. The tensioners as well, there are tensioners that have bearings that rub against the timing belt, idler pulleys, tensioners, those all get changed at the same time.

The only other thing we ran into is the radiator was starting to leak. And we replaced that as well, which is a little bit of extra work on top of the timing belt, but not a lot since we had covers and things, parts removed already. It's a little more accessible, but you can't see it so much here, but there was leakage at both tank scenes.

And you know, this is the original rad, so really good life out of this radiator. We've got a closer up view of the leak. You can see, again, this sort of pink festering. This vehicle uses, if you can't guess by the colour, uses pink coloured antifreeze, something Toyota's used for quite a long time.

And you know, these are plastic tank radiators with aluminum cores, and they crimp these together. At one time, radiator shops would actually replace these. We could actually get these recored, but that's long gone. You know, radiators are all sold new now. When they were out, we just buy new ones.

That's the beauty of Chinese manufacturing it's made the price very inexpensive for a complete radiator. Whereas at one time it used to be very expensive. So this wasn't a major leak, could have been left, but at some point it's going to get a whole lot worse and why not do it now while you have it apart and then you won't have to deal with it again for a decade.

Mark: So how are these Lexus SUV's for reliability?

Bernie: Oh super good. You know, there's not a lot that goes wrong with them until they get quite a bit on an age. I would think that this may well be the first major amount of money that the owner spent in this vehicle. And that's pretty good for a 15 year old vehicle.

I mean, they are complicated. There's a lot of fancy features to them. Some of them have electronic suspensions, so when things do go wrong, they are expensive to fix them and they will eventually wear out. But I just find on these that they just have a much longer life span and you generally pay a lot more for, you know, there was a time I was kind of hunting around for compact SUV. Looking at a European versus like a Lexus. And a Lexus, they're are a lot more money because people know that they're more reliable.

Things like BMWs and Mercedes, they depreciate much faster because there are more problems with them. So you can buy the vehicle for cheaper. You'll just spend more money fixing it. You have to kind of do the math. Maybe it's better to buy the German vehicle over the Japanese, but you know, it all depends, but at anyways, very reliable.

Mark: And the North American manufacturers aren't even in the running?

Bernie: Well, I guess when I'm thinking about Ford Explorers, what else would we have? Dodges? There's some Chrysler products. You know, there's some GMs that are good, you know, I dunno. I just for some reason, just compare the Japanese to the German. I think they're kind of the extremes and the Americans kind of fit in the middle. But yeah definitely if you want to buy a long-term good reliable vehicle, the Lexus is a great way to go.

Mark: If you need some service for your Lexus or Toyota product, or any Japanese made vehicle in Vancouver, BC, Canada, the guys to call are Pawlik Automotive. You can reach them at (604)327-7112 to book your appointment. You have to call and book ahead, they're busy. Or you can book online pawlikautomotive.com. They'll get back to you. They'll get the details. They'll make sure they're ready when you show up. Also check out our YouTube channel, hundreds of videos, many hundreds we've done this for 10 years. All makes models, types of vehicles, all types of repairs. And of course, we really appreciate you watching and listening. Thank you. Thank you, Bernie.

Thank you, Mark. Thanks for watching. It's always a pleasure.