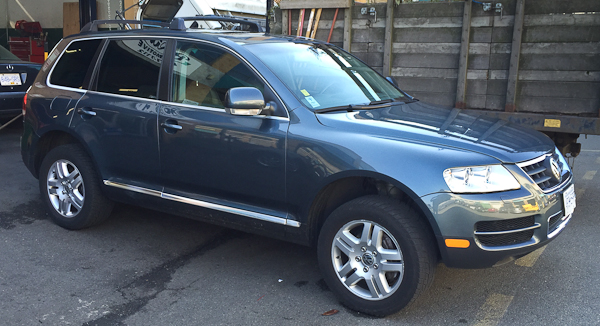 Our latest featured service is a repair on a 2005 VW Touareg for a ‘Hood Open’ warning light concern. The vehicle was brought to us by a client from Kitsilano, Vancouver.

Unusual repairs are a frequent motivating factor for writing these posts, and this vehicle certainly fit that criteria. Our featured 2005 VW Touareg came to the shop with several concerns and one was that the ‘hood open’ warning light would constantly display on the dash. While the warning light was annoying the fact that this prevented the windshield wipers from operating made this a safety concern.

Our diagnosis began with inspections of the hood switch and hood adjustment. All was good with these components. We then proceeded further with our tests where we found the problem to be caused be a microswitch on the side of the radio. Say what? A switch on the side of the radio causing the hood open warning to illuminate. Yes, surprisingly this was the case. Why this circuit is wired in such a way is truly baffling. To me, it represents the culmination of German engineering gone too far.

Nonetheless this was the cause of our concern and we found that by disabling the switch we were able to eliminate the incorrect hood open warning and restore the operation of the wipers. When diagnosing a modern vehicle you never know what strange things you may encounter.

For more about the VW Touareg click this link http://en.wikipedia.org/wiki/Volkswagen_Touareg 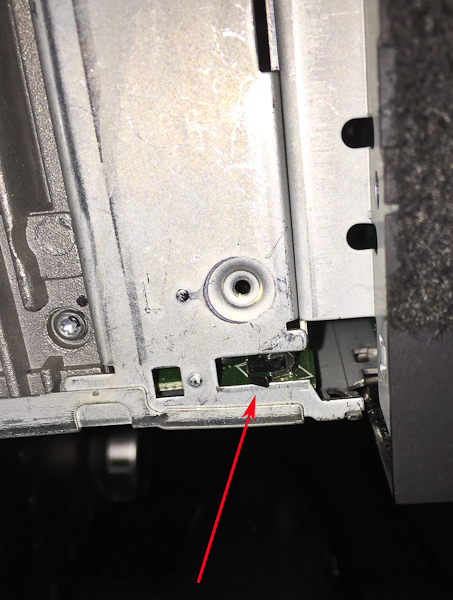 Radio from 2005 VW Toureg. This is the view of the left side of the radio with the radio removed from the dash. The red arrow points to the microswitch that was causing the hood ajar warning light to stay on. What's the relevance? I don't know; but repairing the switch fixed the concern.