Mark: So today's victim is a 2006 Audi A6 Quattro that had a headlight problem. What was going on with this vehicle?

Bernie: The vehicle came to us for an out of province inspection. And one of the issues that was going on with the vehicle, there's a warning light for an adaptive headlight issue on the dash. So all those kinds of things need to be fixed to pass a provincial inspection.

Mark: So what was going on with the adaptive headlight?

Bernie: Well, there's an electronic issue with the headlight. And to be honest, we never really looked too far into what was actually happening with it because if the warning lights on, it needs to be off. So the diagnostic procedure, you know, starts with basically plugging a scan tool in and seeing what sort of trouble codes are there.

You know, operating things, clearing code, see if they return. And of course it came right back on as soon as we fired the headlight back up. The lights were working fine, but you know, that issue needed to be solved and fixed before the vehicle could be passed for inspection.

Mark: So what is an adaptive headlight?

Bernie: So an adaptive headlight, perhaps we can look at some pictures here. While I talk.

So there's the Audi. So basically here's the headlights here. I apologize for the rain. It's been rainy season of Vancouver with severe storms and so on. And it's hard to get pictures of cars outdoors without rain drops on them these days. 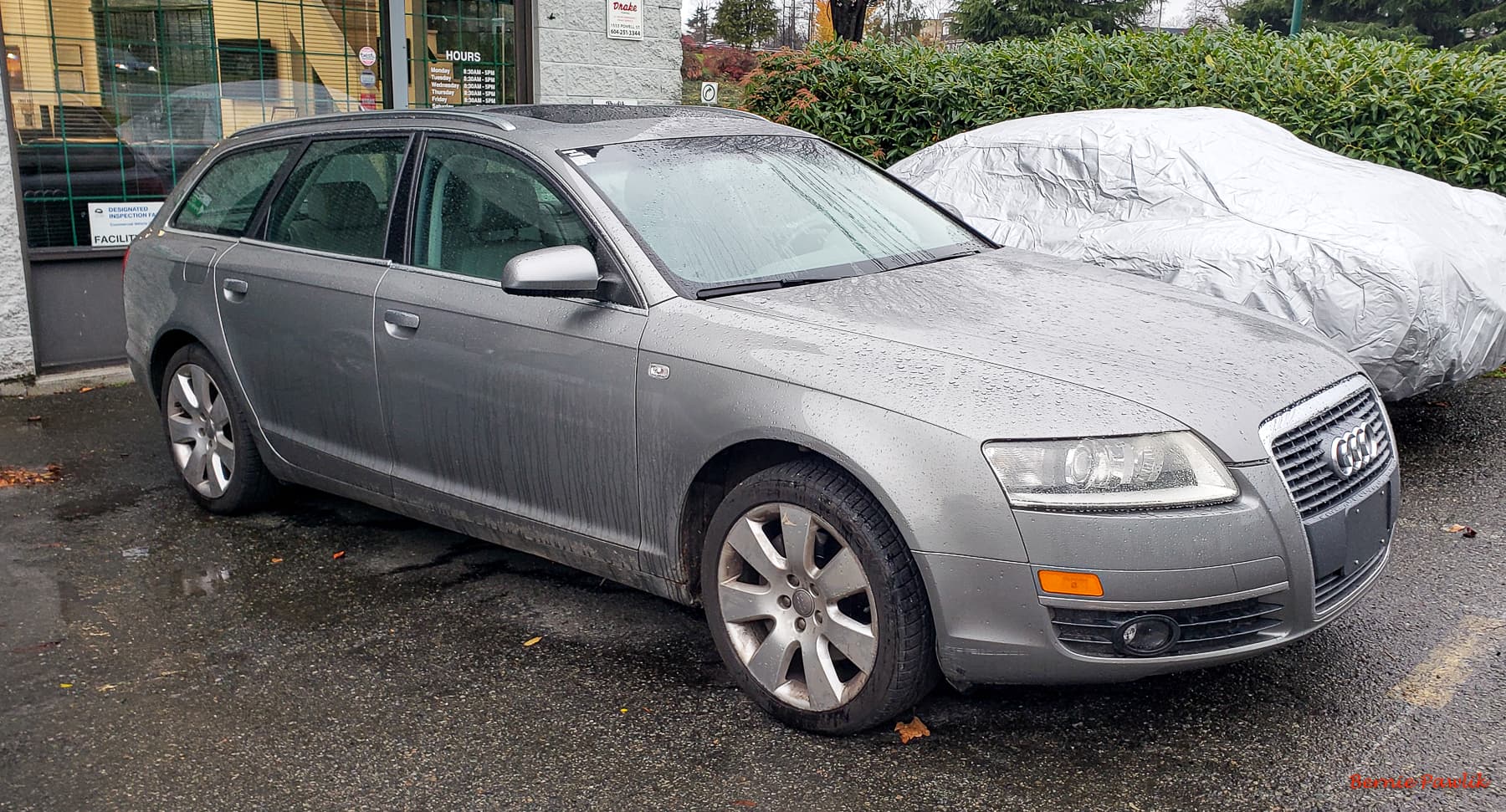 But they have lights, adaptive headlights basically will change depending on when you're turning that the light will point in the direction where you turn. It's actually a pretty awesome feature.

So they'll adapt to road conditions. Some of them will automatically dim as well, but I think most adaptive headlights, at least in this car refer to, they kind of steer with the vehicle so if you're turning left, the lights will kind of point a little bit to the left. And everything's of course taking into account for safety to make sure that it doesn't point into drivers ahead of you, but they'll have sensors to monitor those kinds of things. So that's basically what an adaptive headlight does.

This is another closer look at the new headlight that we put into the vehicle. Again, nice shiny brand new Audi only part, which makes it quite expensive.

Mark: So what kind of testing and diagnosis did you do after you found that the warning light was still coming on? When you turned the lights on? 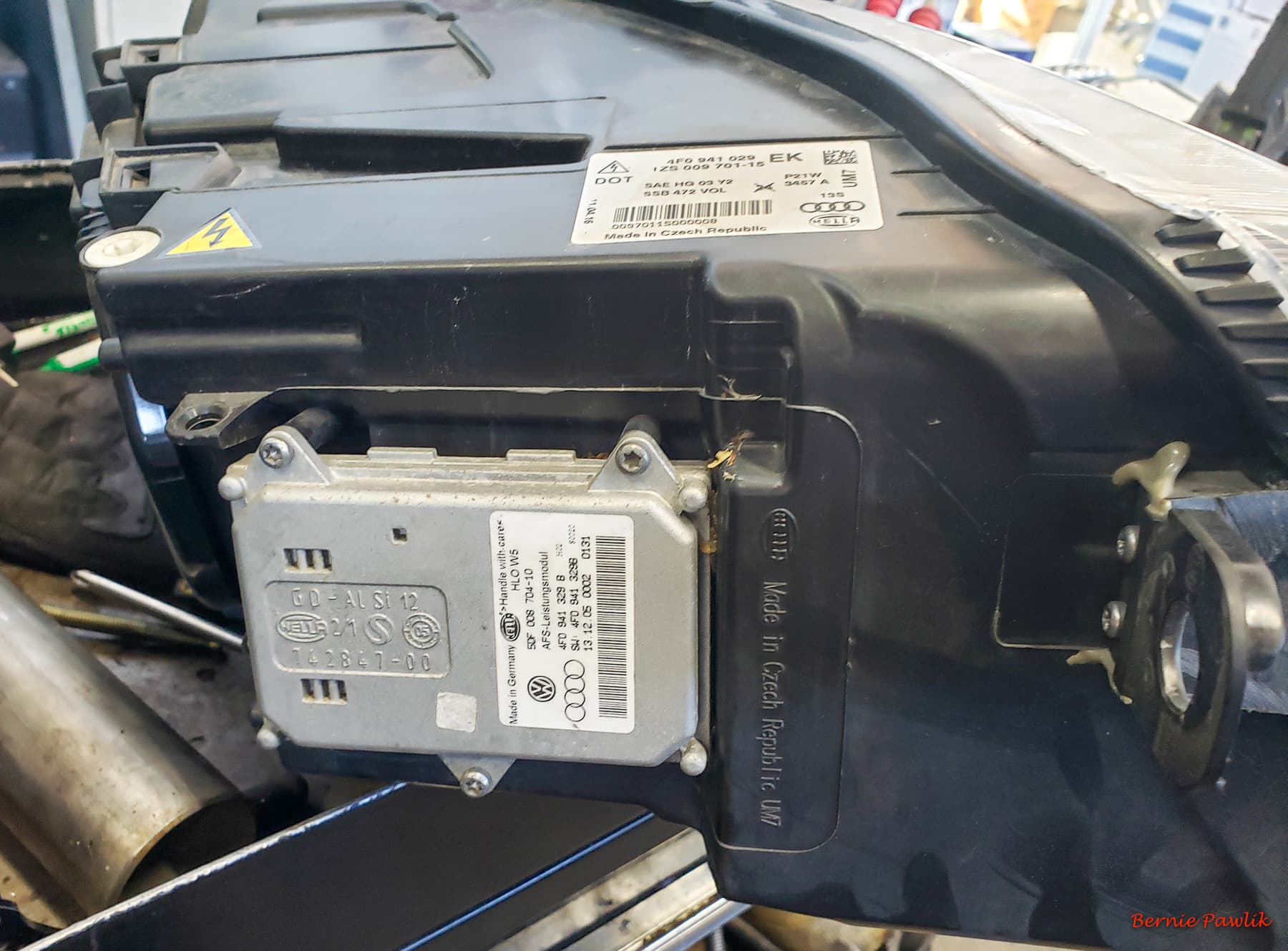 There's also an igniter module as well. Which of course, wasn't an issue because the light was igniting and turning on. It's a Xenon headlight, but this module here is part of the adaptive system as well. So we had to do some tests on the module and then the end, we were replaced the light and the module cause we found both of them to have issues.

So it's kind of critical, but probably the best way to test it is to really swap the module from one side to the other on the vehicle and see if the problem follows or whether the issue stays with the headlight. And we found for the most part, the issue stayed at the headlight, but occasionally the module was just giving us some concern too. So both parts were replaced.

Some of the electrical connectors. This is where the module plugs in. You can see there's basically three very large pins. These would be the high power, 12 volt, and then the rest of the very small little wires. So these would be for sensors and actuators and things. The high power components run through these large wires here. 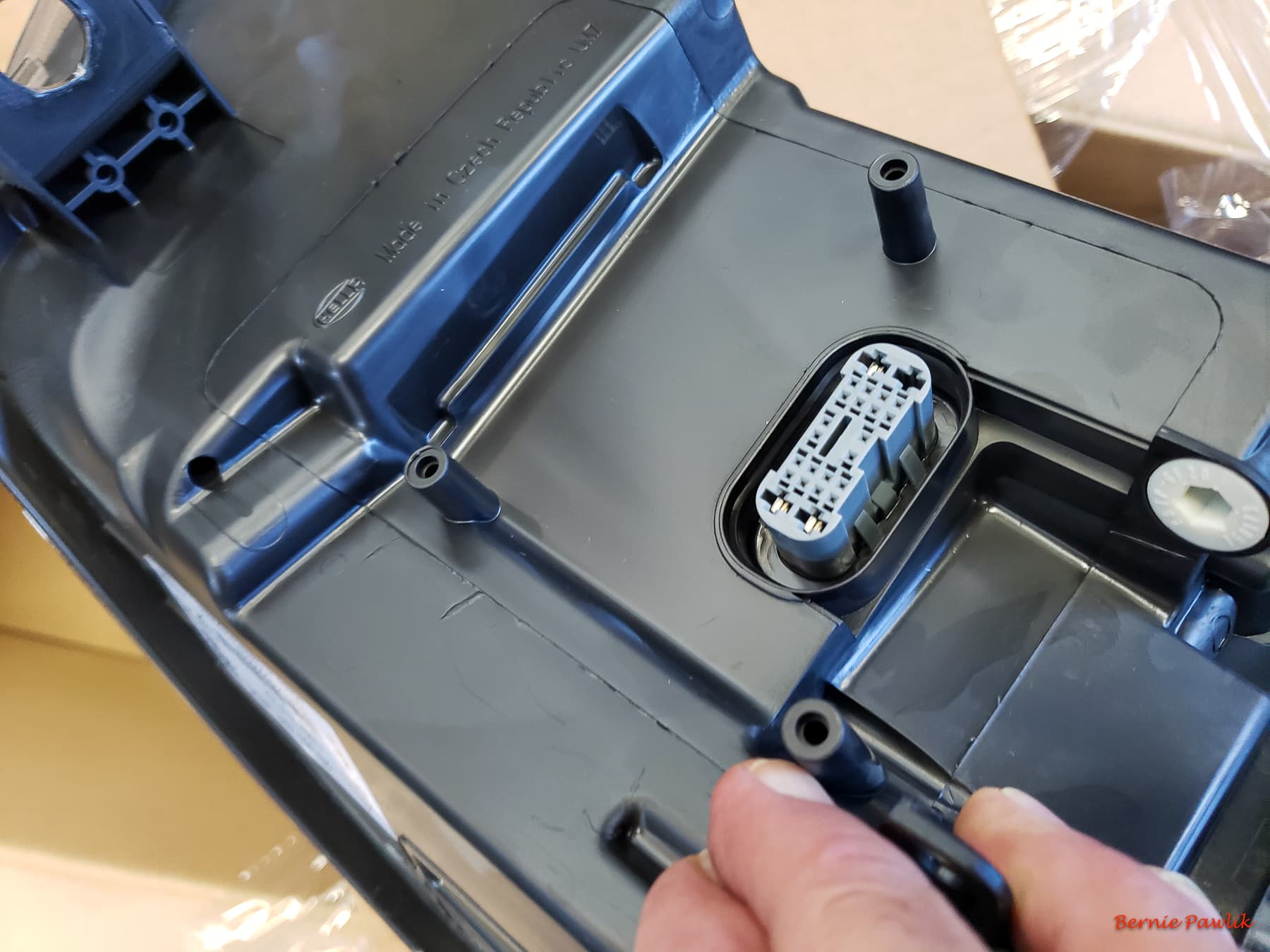 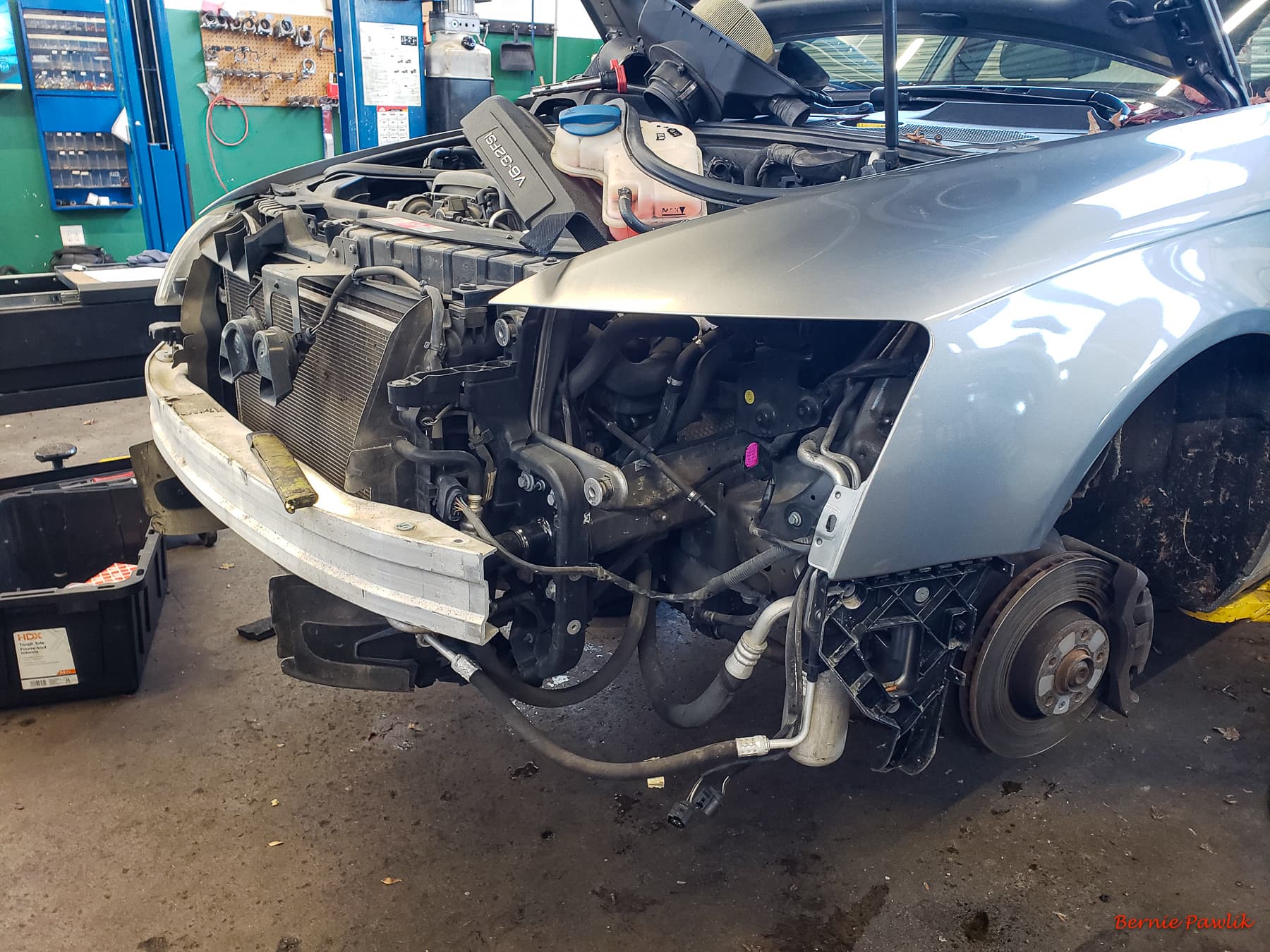 This is kind of what's involved in replacing it, removing the front bumper assembly. So there's a fair bit of work involved in changing the headlight on this car. Some cars are really easy. They have little clips and they pop out and other cars are very complicated and this one happens to be the complicated kind.

There's a view where the main power plug that comes in from the vehicle wiring harness. So again, there's a number of pins here. These would turn on the different lights, high beam, low beam, tail lights and that sort of thing. 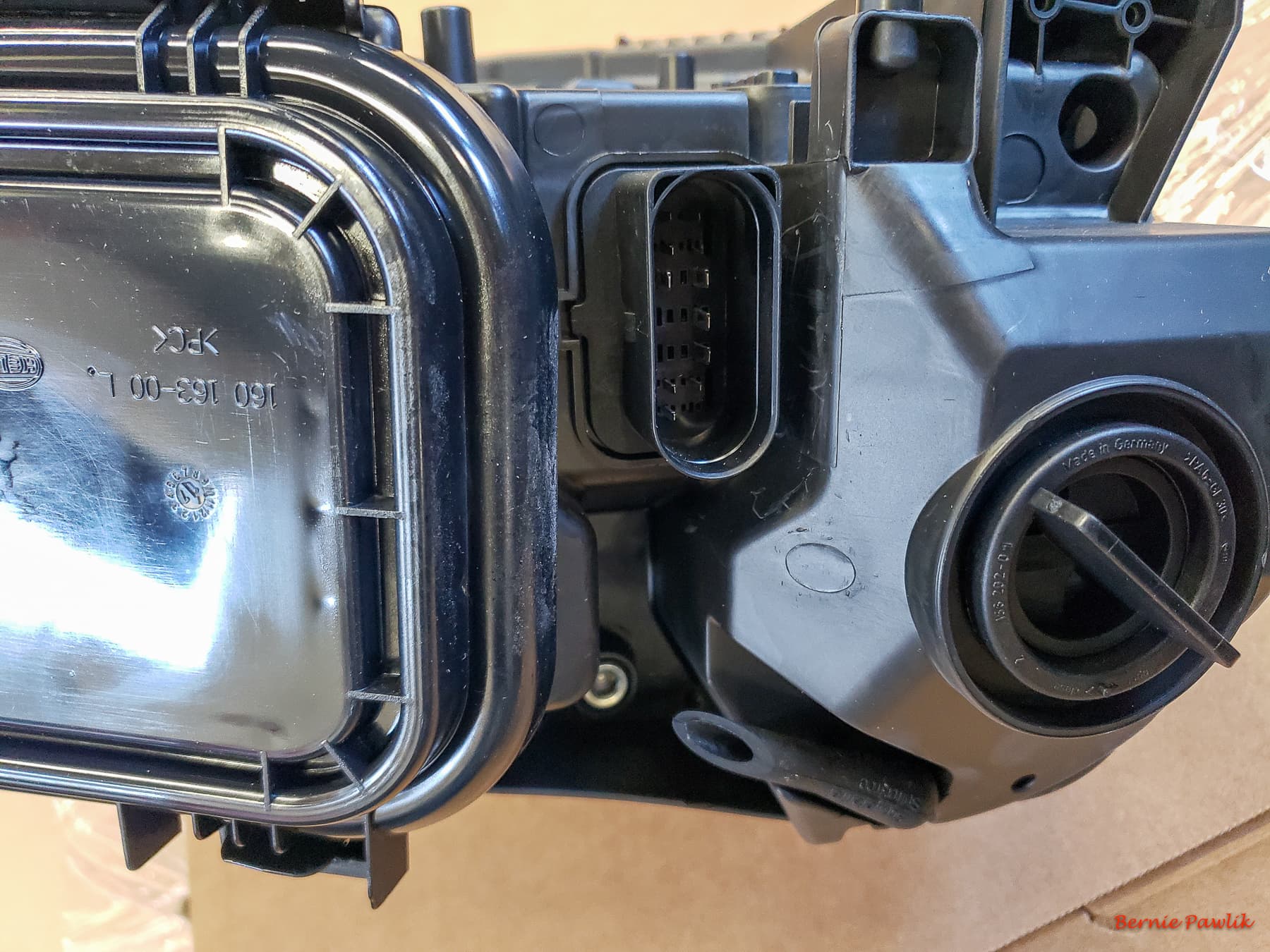 Mark: So it's all these control module after a placement. Did you have to reprogram anything?

Bernie: No. Fortunately on this vehicle is plug and play. So you never know from one car to the next, some of them, as soon as you change an electronic module, you have to right, I'll say right as in WRITE the module into the vehicle computer system. But in this case, you don't, it's it's plug and play. So that's good. It's time-consuming, but at least it takes that complexity out of the repair.

Mark: And so why did it need to be repaired in order to pass a provincial inspection? The lights were working, right?

Bernie: Yeah. They were. Well, any issue, any warning lights that are on anything that isn't working to factory specifications or that's a safety problem needs to be rectified.

And so in this case, you know, if the lights aren't working properly, which they aren't, if the adaptive lights aren't working, then that needs to be fixed and brought up to spec. So it makes for some expensive repair sometimes for certain things that you would think, well, I'll just live with that because it's working okay. So, you know, it can make for some expensive repairs.

The other issue that can be difficult is if this vehicle gets really old and the parts are no longer available and I'm thinking like, you know, we get a lot of some old Ford trucks that come into our shop. Vans. People have like camper vans and you know, they're still worth keeping, but all of a sudden there's an ABS warning light on the dash.

But I mean, fortunately this Audi is not very old, so still easy to get parts. So if you have a vehicle that needs to be brought in from out of province, you have a warning light on of any sort, just know that you're going to need to have that fixed. Whether that's an Audi or whatever it is, whether it seems like a superfluous component, it 's still important when it comes time to have that inspection done.

Mark: So if you need some repairs on your Audi or you need a provincial inspection to bring a vehicle in from out of province, guys to see are Pawlik Automotive. You can check out the website pawlikautomotive.com. You can book your appointment there, or you can book on a, by phone, who knew. 604-327-7112 to book your appointment. You have to call and book ahead or book online. They're busy or check out the website, hundreds and hundreds, maybe over thousands, actually of articles, videos. We've been doing this for a long time. Pawlikautomotive.com. Same thing on YouTube, Pawlik Auto Repair. All makes and models, all types of repairs. And we really appreciate you watching and listening. Thank you, Bernie.

Thank you, Mark. And thanks for watching and thank you for listening.