Mark: So today's victim first victim is a 2006 Audi A6 that had a valve cover gasket issue. What was going on with this vehicle?

Mark: So, is that a typical thing when you change spark plugs that you have to change the valve cover gasket?

Bernie: No it's not typical. It happens from time to time. Valve cover gaskets will leak in certain ways. Most of the time it's an external leak so oil will leak outside the cover. It'll drip on the ground, it might just seep out and kind of get caught by splash pans. If it's a minor leak, it not really be noticed by the owner of the vehicle. But it can also leak onto the exhaust and start smoking and smelling. In this case, there was nothing noticed other than, you know, when we took the spark plugs out, there was oil inside the tube.

Mark: So what would happen if you just left the oil inside the tube?

Bernie: Well, the first thing that happens of course is when we pull a spark plug out the oil drains down the tube and into the engine. So the first start-up will be rather smoky, which is no big deal. But what happens is, as the oil builds up inside the tube, it eventually builds up to the level where the spark plug wire connects to the spark plug and in that case, it'll actually short the ignition wire to ground causing an engine misfire. Plus you know, once you get oil on the spark plug wire, it tends to soften the boot and wear that out. So you really don't want that to happen. I mean, if we were actually to take it apart and it was so badly soaked, we'd have to change the wires. But in this case, it's got ignition coils. You may have to change the coils of the coil boot if that's available separately.

Mark: Anything difficult or unique about this repair?

Bernie: Well, let's just get into some pictures. Difficult. No. These are pretty complex cars to work on for the most part. There's our Audi. 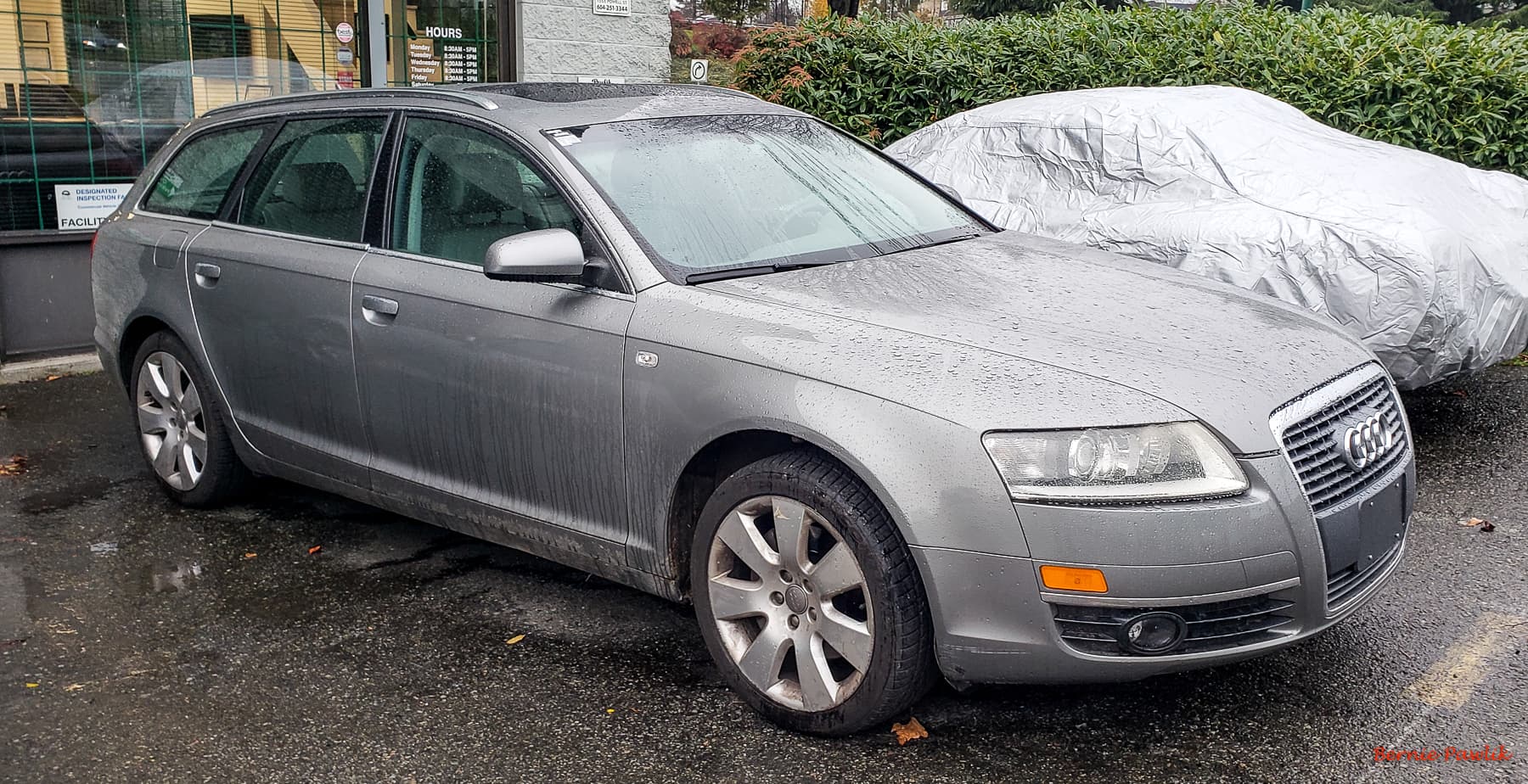 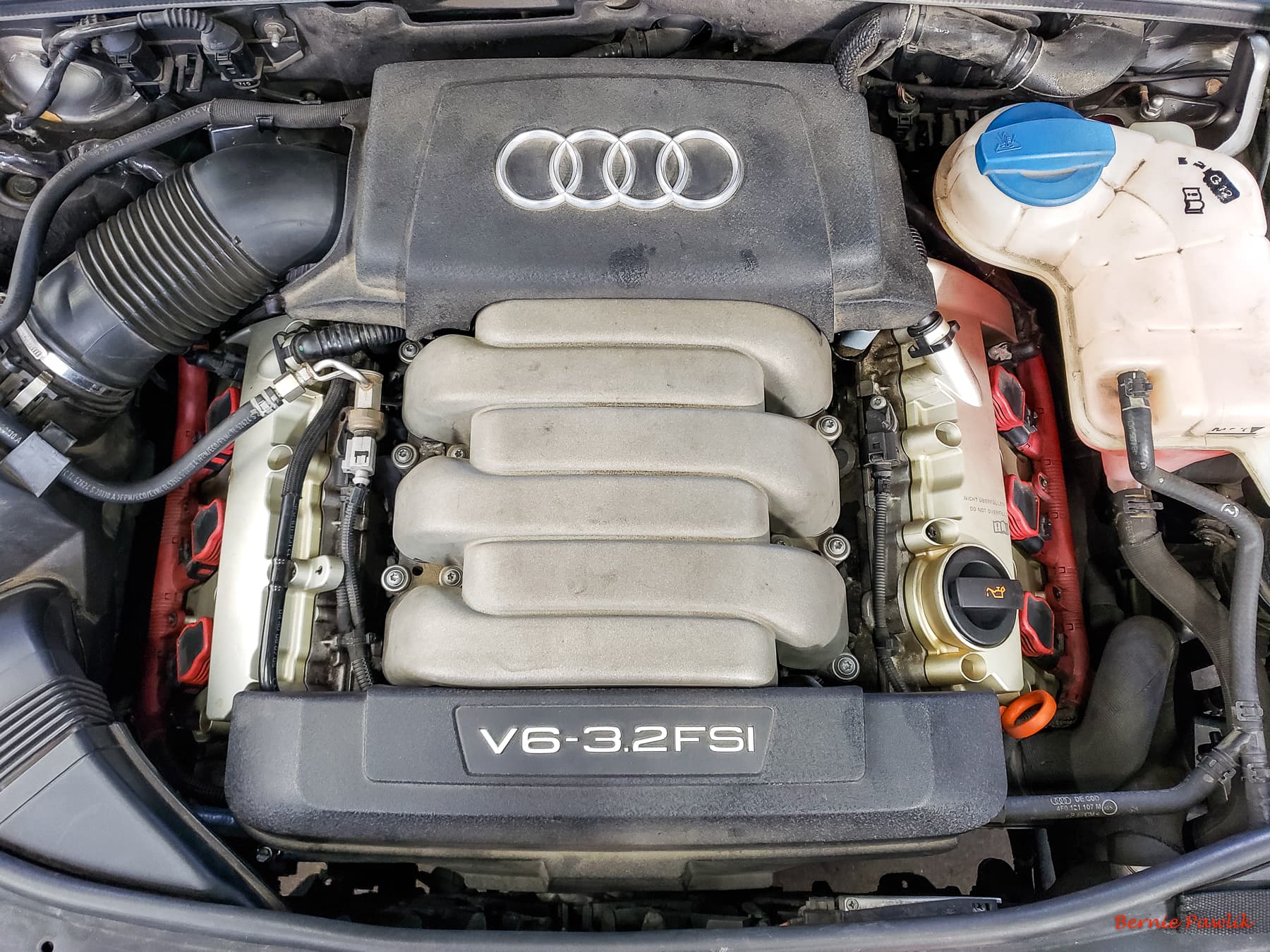 And on the other side, these red pieces here, these are all the ignition coils. It's a V6 engine. So the coils have to be removed and the valve covers actually come out fairly easily for the type of engine that it is. So this is one of the simpler replacements. But what is unique? Maybe not unique nowadays, but I find, oh, it's interesting, is the valve covers are made of plastic. 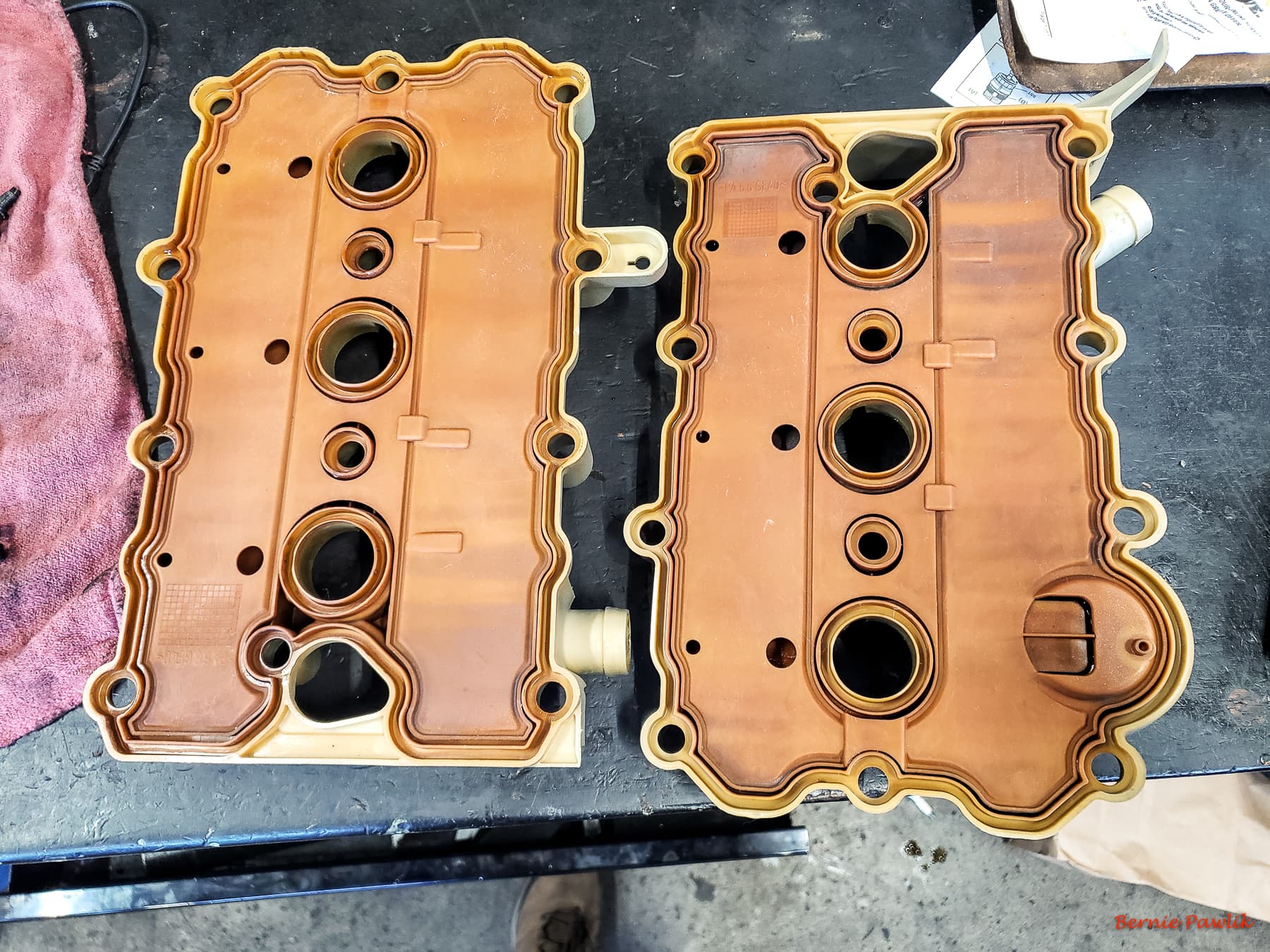 Why do they use plastic? Save weight. Probably the biggest reason. And you can also mold it in many different ways. You can easier to mold plastic into shapes and incorporate components than it is to do it with metal.

These are separate gaskets as I'm pointing out with the mouse pointer. You're looking at, just photographs. All you're going to see is just the pictures of the valve cover. But in this three tubes are where the oil seals go. So these are actually where the major leak was, but of course you have to replace everything.

Mark: So once you pull the valve covers off, you redo the gasket every time, basically.

Bernie: Yeah, we do. Yeah. You replaced the gasket. I mean, I've had jobs where we've done an engine and then we'd go, oh, we just changed the valve gasket two months ago. Let's just reuse it and it tends to leak. So it's usually once you take something apart, you got to replace the gasket. It's just kind of a no-brainer. You'll also notice how clean those valve covers were. Actually, I'll just get back into the picture again. Very clean. We have a a jet washer that we put all our parts in, unless it's an electrical part or electronic part, which wrecks it, but we jet wash everything.

So when we took these off, they would have been grungy and oily, and they're clean and they looked as good as new. So that's another part of our high-end service that we offer at Pawlik Automotive. We clean everything very well. Not make it look like new, but as new.

Mark: So how difficult of a job is the valve cover replacement on this V6?

Bernie: Yeah, as I mentioned, it's really not too difficult. It's a bit of labour of course, but pretty straightforward compared to valve cover jobs we do in a lot of other vehicles. There's not a lot that needs to be removed to get at the valve covers. Many times on certain V engines, the intake plenum will hang over top of one side. So it will require a lot of extra work to take the valve cover off. But in this case, it's actually one of the things on this Audi engine that's fairly straightforward.

Mark: And how reliable are Audi A6 vehicles?

Bernie: Well, they're not too bad. I mean, being an Audi, they're more expensive to repair than most average vehicles. It's a high end vehicle. So the costs are higher, but it's a pretty good vehicle. This one's an 06. It's got a fair number of kilometres on it and still going strong. So it's a pretty good vehicle, but you know, if you own one, you will expect to pay a lot more for service and repair. They're European, they're kind of finicky. But other than that, a good car.

Mark: You pay for that performance that you're getting.

Bernie: Yeah. I've often thought, you know, oh, you pay more money for the car, so it's going to be more reliable and you spend less on repairs, but the truth is you just get a better ride. It's just while you're on the journey, the rides better. But the cost to play is higher.

Mark: So there you go. If you're looking for service on your Audi in Vancouver, the guys to see are Pawlik Automotive. You can book online at their website pawlikautomotive.com. They'll get back to you. They'll find out exactly what's going on. Or you can call and book at (604) 327-7112. You have to book ahead. They're busy. Check out the website, again, many repairs. We've been doing this for 10 years. Almost a thousand altogether videos on all makes and models and types of repairs, pawlikautomotive.com. Or the YouTube channel Pawlik Auto Repair. Again, you can laugh at us from 10 years ago. Many people do. Including ourselves. Of course. Including us. We've gotten better at it I hope over the years. Thank you so much for watching and listening. We really appreciate it. Thanks Bernie.