Mark: Hi, it's Mark from TLR. I'm here with Bernie Pawlik Pawlik automotive in Vancouver. 24 time winners best auto repair in Vancouver as voted by their customers and we're talking cars. How are you doing Bernie?

Mark: So bit of an old vehicle, 2006 Ford E450 6 litre, oh oh diesel that had a fan clutch problem. What was going on with this vehicle?

Bernie: So yeah, this vehicle actually came to us originally for a couple of concerns, first of all, this is a big cube van it barely run. Did some diagnosis, testing, found the FICM, the fuel injection control module was bad and replaced that. And the vehicle ran quite well, but still had some transmission shifting issues.

So brought the vehicle back to us to see what we could find on it. And that's where we kind of did some further testing and diagnosis.

Mark: What did you discover?

Bernie: Well, we discovered there's a couple of codes stored in the vehicle computer. Codes for two glow plugs, which weren't relevant to the issue. That's just going to cause a cold starting problem, if anything. And two codes for the transmission range sensor.

So we did some further investigating, tested some circuits and we found low and behold the actual electric fan clutch was causing the issue. Basically there was some corroded wires, which took a while to discover, and this may or may not have caused the wires, of course it gives a visual indications there's something wrong. But internally there's something wrong with the fan clutch, which basically caused the transmission range sensor to have codes and allowed the transmission not to shift properly.

Bernie: So I'll just show a picture right now. This is the fan clutch. So a radiator fan uses a lot of energy from an engine to spin it. And so many years ago, decades ago, engineers decided, Hey, let's put a clutch on this fan so that it only operates under certain speeds and they took it one-step further on these vehicles and a lot of others where they actually incorporated an electric coupler inside the fan clutch. 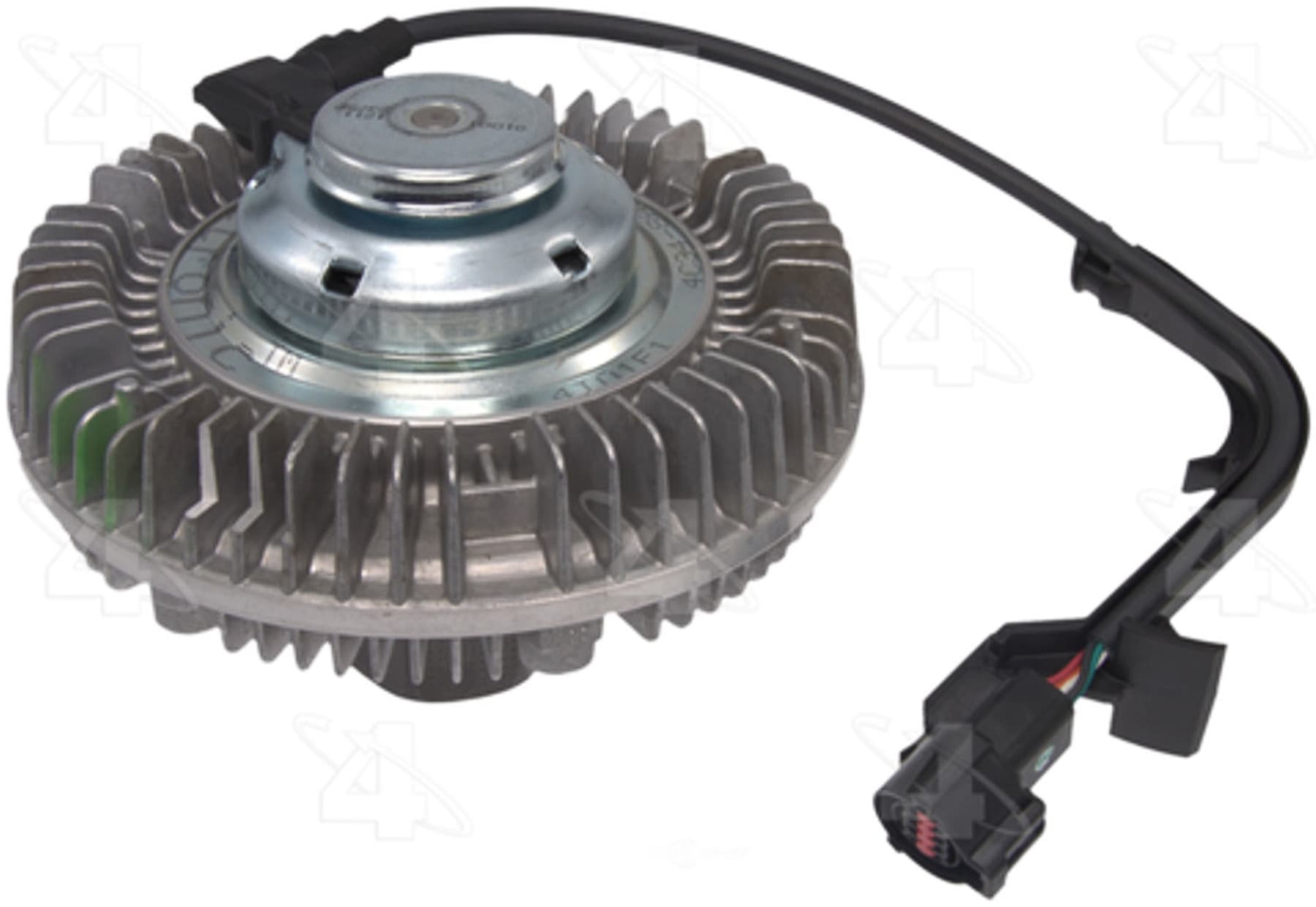 Now you can see from this item here in the simple days, there was no wiring attached to these, but this one here is a little more sophisticated. There's a number of wires you can see in this electrical connector here. So that's basically what the fan clutch is.

I didn't actually take a picture of the old one. By the time I was ready to do it, it got thrown out, but there was basically wires with the installation corroded off. Anything like that, of course can cause a short and some other serious issues or the wires could actually be in fact broken. That's a little view of the wiring and I've got a couple other pictures to show in a minute where we can talk a little further.

Mark: Okay. So if I understand, then the problem with the vehicle shifting was being caused by the radiators fan clutch.

Mark: What the heck?

Bernie: Yeah. Yeah. Well, exactly. So how do we discover it? Well, we have a pretty good database of repair information that has a lot of previous repairs. So wouldn't say it's a cheat, but we can enter codes into a certain database that we have and a lot of times it'll say, Hey, by the way, you know, 9 out of 10 vehicles, it turned out to be a fan clutch for this particular code. So this is not an uncommon issue. We'll talk about that a little more for these things to happen and not just on Fords, on other vehicles as well.

Mark: Is this just an issue with the way the electrical system was designed back in the dark ages of 2006?

Bernie: Well, I wouldn't even say it's the dark ages of 2006, but it is the way the electrical system's designed. What happens is a lot of vehicles they'll have a sensor circuit, and this particular vehicle and a lot of vehicles for many years. I don't know if brand new ones, because they change things a lot, but they use a five volt reference signal. And they'll send us five volt reference signal and a ground out to a number of the sensors and if one of those sensors develops a short or something goes wrong, it'll cause the whole circuit to go down. To go off. So the vehicle may not start because of a certain issue. We did actually have a F350, a couple of weeks before this, that wouldn't start because of this fan clutch problem. 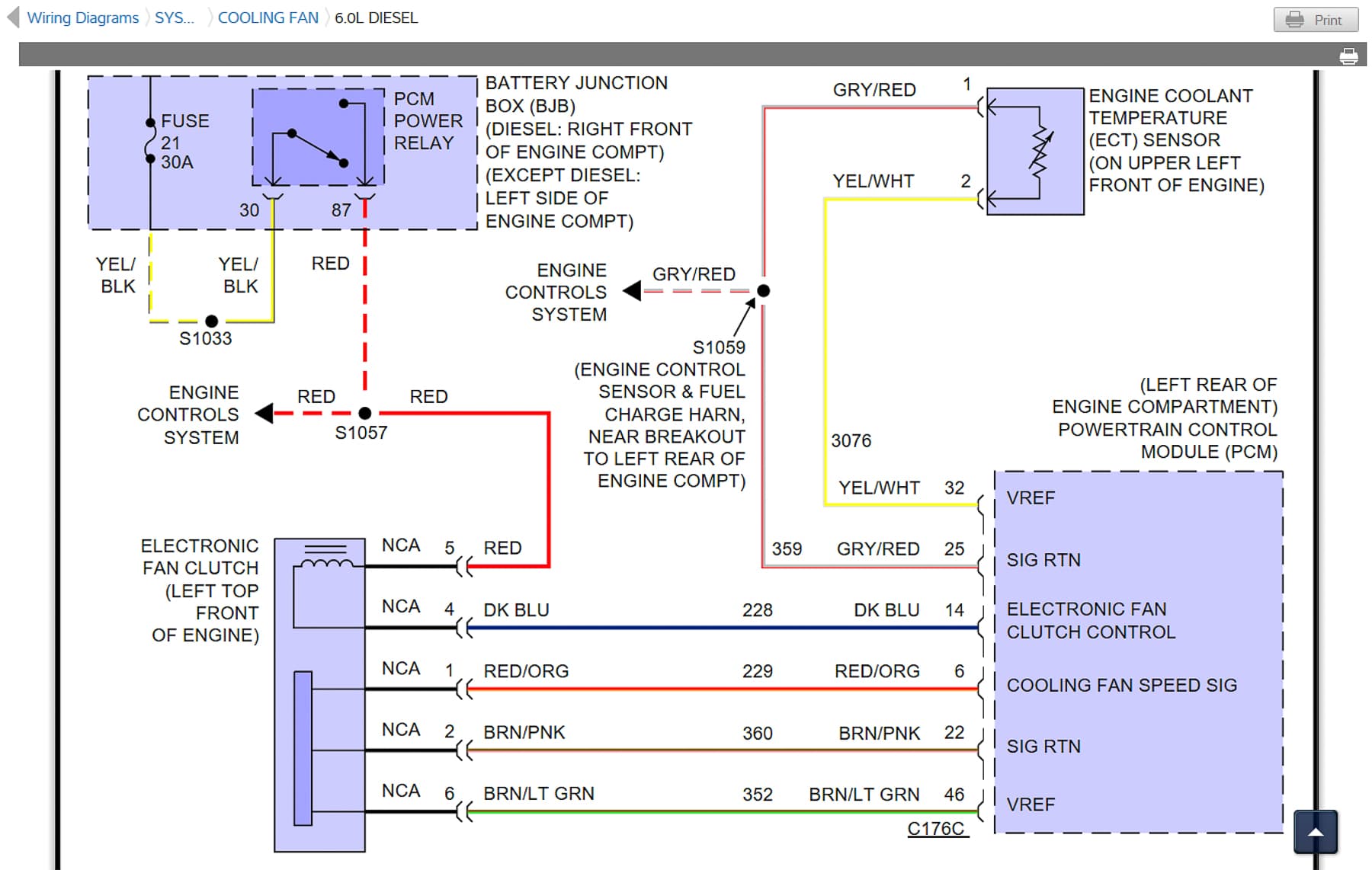 I'll just show a picture, a wiring diagram photo here for those who understand. This is the wiring diagram for the fan clutch. That's how complex it is. This is the electronic fan clutch here. This is that wiring connector we saw. There's basically 1, 2, 3, 4, 5 wires on this fan clutch. And you know, one of them of course, is the main power wire that basically operates the fan and then the rest of it, there's a fan speed signal sensor. There's a single return reference voltage. And so many of these go bad, this will cause the engine computer to go down. You can see here, engine compartment, powertrain control module, transmissions controlled by this, that a lot of the engines is controlled by this.

So there's a lot that's going on and yeah, so that's in a nutshell. The wiring diagram that shows the the fan circuit and the wiring diagram for the engine is five pages of wiring diagrams for the engine powertrain module and FICM. So there's a lot of wiring involved, a lot of complexity and thank God for these databases we have because honestly, we could spend weeks trying to figure out some of these repairs. So as cars have gotten more complicated, there's been a community that kind of developed of everyone sharing information. And this this got complicated, it's got easier. So it's kind of weird.

Mark: So you mentioned this is a common issue, how common is it? You've had two in just a couple weeks.

Bernie: We had two in a couple of weeks you know, this is actually the first time we've run into this, but it does happen out there. You know, again, when we look at our databases, we see that it's happening and it may have just taken a little while to drift into our shop.

But I'm expecting we're going to find a lot more of this kind of stuff. And of course the good thing is the more often we see these kinds of things, the more often we go, Hey, let's check and test that item first. As part of the diagnostic, of course, it's complicated to get the fan clutch in and out of this vehicle being a van.

But the first thing we tested once we suspected the fan was the issue is to actually disconnect the wiring, which took quite a while. To access the wiring and nothing's easy on these vehicles. Nigel disconnected the wiring to the fan, road tested, sure enough the codes were gone for the transmission range sensor and it shifted properly. So before we even put the part in, we verify it worked.

Mark: So how did the truck run after the repair?

Bernie: Well it was a bit of a mixed thing. So basically when the engine was warm, ran perfectly. We had the vehicle repaired, the codes were gone, nothing came back, road tested it a couple of times. And then the owner picked it up the next morning, drove it around the block said, Hey, it's the same thing. We're going, What? It seemed to be fine when we had it. So left it with us. We drove it and tested a few more things. Verified everything was working fine.

No more codes for the range sensor. Did a few more tests and noticed that the issue actually happened when the engine was cold. And so what we figured at the end of the day, the fuel injectors were probably old. This vehicle had pretty low mileage for an 06. That's what, 15 years old now, 16 years old, but about 150,000 kilometres, which is pretty old. It's a kind of thing on these engines where the fuel injectors can get kind of sticky. There was no smoke blowing out and once the engine warmed up was even moderately warm, it ran like perfect.

So I figured there's probably some issues with the injectors may be sticking. There's additives you can add to the oil. At this point we suggested, Hey, pick it up, see how it works for awhile. He had already spent an awful lot of money fixing things. So I figured if it was my own vehicle, I'd probably just drive it for a little while and just see how things go. So that's where we've left it. But I think, you know, set of fuel injectors will probably make a difference.

Mark: So if you were doing that, and this is a question that occurred to me, because I know where you guys take the bodies off of a lot of these, the trucks, would you take the body off the van to work on the injectors?

Bernie: Not to do the injectors you don't need to, but if anything else, like a head gasket job you would, and unfortunately this vehicle would just be too big to do in our shop. You need a pretty big hoist and set up to remove a cab box off a cube van. So that's a little beyond our capacity to do things at our shop. But I mean, we do trucks a lot, you know, the pickups, which are not too difficult to remove the cab. But yeah, we've actually yet to do a van head gasket job.

They seem to last a long time. Although we were suspicious that the head gaskets on this might be bad because we have to add coolant a couple of times to the overflow. No smoke blowing out, no other performance issues yet, but I'd say this unfortunately, the owner might be in for some more expensive repairs. Not a surprise on a six litre.

Mark: Well, we've talked a lot about six litres. We've got quite a few videos on them. Six litre diesel Fords. How's your opinion on them. Has it changed?

Bernie: No. I mean, it's a good engine and they have a lot of problems and you know, if you want to buy a diesel that doesn't have problems. This is probably the one to avoid. 6.7 is certainly a whole lot better. We see very, very few problems with those in comparison. So after three generations of diesels, Ford finally got it right.

Mark: So if you're the proud owner of a six litre diesel in Vancouver and you're having issues and you want experts to deal with it and get it running right, actually fix the problems for good. The guys to see are Pawlik Automotive. You can reach them on the website pawlikautomotive.com. You can book your appointments there. They'll call you back. They'll talk to you. They'll find out what's going on. Or you can call them (604) 327-7112 to book your appointment in Vancouver. And thank you so much for watching. We really appreciate it. Thanks Bernie.

Bernie: Thank you, Mark and thanks for watching.