Thursday’s featured service is ABS Tone Ring Replacement on a 2006 Ford Escape, brought to us by a client from Kerrisdale, Vancouver. 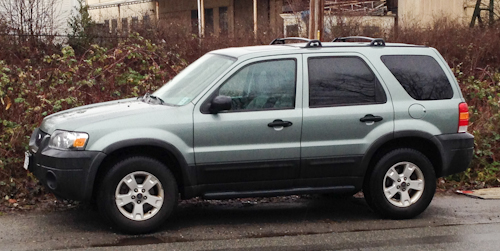 The ABS tone ring is a toothed wheel mounted on the axle shaft and sits in close proximity to the ABS wheel speed sensor. As the tone ring turns it ‘pulses’ the ABS sensor to generate a signal to the ABS module. The signal varies in amplitude and frequency depending on the speed that the wheel is turning: from this the ABS module can determine the speed of the wheel and the rate that it is accelerating and decelerating.

Our 2006 Ford Escape came in with the ABS warning light illuminated on the dash. We connected our scan tool and found a stored code for the right rear wheel speed sensor. We performed further diagnosis which included road tests while monitoring the data on our scan tool. Back at the shop a hoist inspection found the ABS tone wheel cracked. When the wheel cracks it becomes out of round and causes the sensor to generate erratic signals.

In the case of our Ford Escape we had two options: one was to replace just the ring and the other was to replace the entire axle shaft which contains a new ring. We opted for the latter option because the axle was so badly rusted that a new ring could not be put on and removing the rust would have resulted in a loose fitting ring. A loose ring would be just as bad as our broken ring.

Tone ring breakage is a fairly common failure. This is the second ring that we have replaced on this vehicle as the right front one broke a year or so ago. What causes these rings to break is usually rust. Over time, the axle which is made of steel starts to rust and the rust expands the metal under the tone ring. Eventually the ring cracks from the pressure.

This Ford Escape, in spite of having very low mileage was frequently driven to Whistler and has seen a fair bit of road salt. Salt vastly speeds up the rusting process so if you drive in salty winter road conditions expect that you will experience ABS tone ring failures.

For more about ABS braking systems check out this link http://en.wikipedia.org/wiki/Anti-lock_braking_system 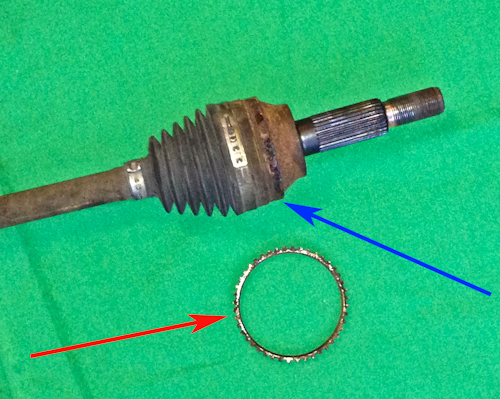