Our latest featured service is spark plug replacement on a 2006 Ford F150 with a 5.4 liter engine, brought to us by a client from Richmond, BC.

Spark plug replacement was at one time an annual service on most cars and trucks. Nowadays, thanks to improvements with metals and materials along with changing technology, spark plugs last a long time, sometimes as long as 200,000 kilometers. At least that’s the plan when the vehicle is new and how it’s supposed to play out on the engineer’s design board. In reality it can be quite different.

Most times, and on many vehicles spark plugs or related ignition components like ignition coils will fail before their scheduled interval. Ford is no exception and the F150 5.4 liter engine, along with their other Triton type engines, have been extremely troublesome where spark plugs are concerned.

Overall the 5.4 liter is quite a reliable engine with the exception of the spark plug; and it’s not some much that the spark plugs fail, it’s other things. Early generation Triton engines suffered from spark plug thread failure. Without warning and frequently under a loaded condition spark plugs would just blow out of the cylinder head taking the threads with them. Repairs were complex, ranging from a few hundred dollars if you were luck enough to fix the threads in the truck to a couple of thousand to remove the heads and do a permanent repair.

Ford recognized the concern and changed their cylinder head design. Since 2004 spark plugs no longer blew out of the heads. Great news, right! Unfortunately other problems with the new design became apparent. The spark plugs now frequently seize and break off in the cylinder head. This creates a very time consuming job to remove the broken plug end. Fortunately we have special tools which make removal in the truck possible.

Our featured Ford F150 had a rough running condition which we diagnosed as being partially caused by bad spark plugs. During the plug removal process we had 6 of the 8 spark plugs break off, and as Murphy’s law would have it, they were all at the rear of the engine in the most difficult holes. With new spark plugs installed and a Motorvac Fuel injection cleaning and fuel filter replacement the F150 ran great.

For more about the Ford F150 please click here http://www.edmunds.com/ford/f-150/history.html 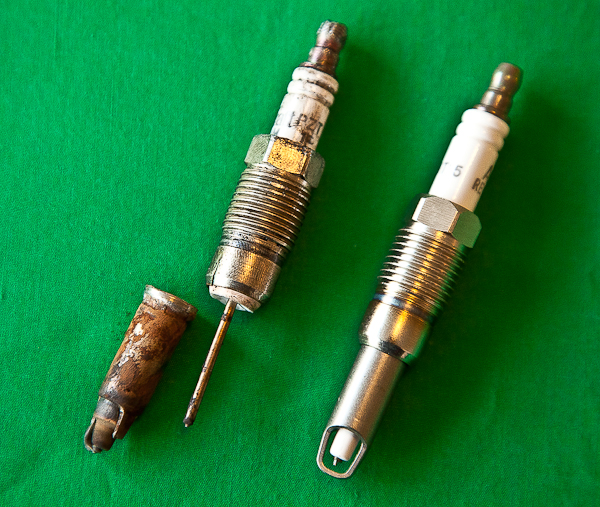 Old and new spark plugs. Broken plug on left: the bottom sleeve is the part that seizes into the spark plug hole and requires special tools to remove it when it breaks. It’s really a very poor design.