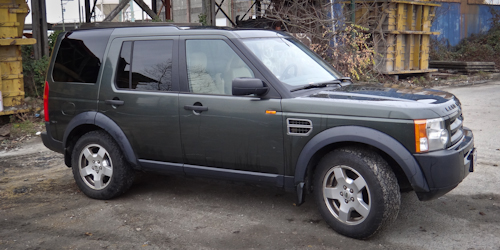 On all vehicles, brake replacement is a required repair: the question is when? With some vehicles the brakes wear out in less than 20,000 kilometers where as others go for over 100,000 kilometers. Most of the difference is in the design of the vehicle and its braking system.

The Land Rover LR3, being the luxury vehicle that it is gave the owner a warning on the dash that the rear brake pads were worn out. This is accomplished with an electrical brake pad wear sensor that clips onto the brake pads. Sensors are installed front and rear.

Typical to most European vehicles, the brake rotors require replacement along with the pads. The rotors wear at an extreme rate and by the time the pads reach the end of their life, enough rotor material has worn off so as to make them unusable.

The Land Rover LR3, while being a luxurious sport utility vehicle is also an excellent off road vehicle. Equipped with air suspension, the ground clearance can be raised for off road usage. The suspension is tough and with the four wheel drive system’s electronic controls this vehicle will take you over the roughest of roads.

For more on the Land Rover LR3, view this link. http://en.wikipedia.org/wiki/Land_Rover_LR3