Mark: Hi, it's Mark from Top Local. I'm here with Bernie Pawlik, Pawlik Automotive in Vancouver. 23 time winners of Best Auto Repair in Vancouver as voted by their customers. 23 times Bernie we're talking cars. How are you doing?

Mark: So today's victim 2006 Land Rover LR3 that had a transfer case issue. What was going on with this Land Rover?

Bernie: Yeah. So the owner of the vehicle brought the vehicle to us with a complaint of a front end noise. While she was driving the vehicle. There was some kind of grinding kind of noises going on in the front end. That was the complaint.

Mark: So what testing and diagnosis did you do to find the problem?

Bernie: Well, the first step of course, is the road test the vehicle. Listen for the complaint, which we heard quite easily. And then from there put the vehicle up on a hoist. Pretty sure it was some kind of drive train issue, a bearing of some sort, maybe an axle bearing or something.

Mark: So what does a transfer case do?

And most of them had two speeds. So you'd have like an extra low range. This would be kind of, we're going back into the days of four wheel drive trucks. So you'd have like a low range and you could crawl up steep hills and use the kind of utility that four wheel drives were meant for. Well, this vehicle has that capability, but it also with modern vehicles, they're all wheel drive. So there has to be some slippage between the front and rear axle. Otherwise things will bind up when you go around corners. And if you've ever owned an old truck that has, you know, a four wheel drive system in it, you'll notice if you put it in four wheel drive, you go around the corner and the vehicle will almost stop moving because it locks up.

So these have slipped clutches inside there's some complexity to them and also with Land Rover, they have these different terrain control module. So they can adjust the transfer case to lock in different ways, depending on what you're going over. Perhaps favouring the front or rear axle or both, it really depends on what's going on.

So there's a lot inside a transfer case on a lot of modern vehicles. And this one. Yeah. So that's basically what we got.

Mark: So, is this a common problem?

Bernie: No, this is actually the first transfer case we've done on a Land Rover and this vehicle actually has about 240,000 kilometres. So it lasted quite a long time. Overall and in general, I mean, transfer cases do last a long time. Unless you abuse them or they develop a leak and you run them out of oil, but this one was full of oil. It just basically I'd say just wore out from old age.

Mark: What did you do to repair the issue?

Bernie: This one, we put a used unit in it. It was at the time we sort of looked into options. It seemed to be the most cost effective. And for the customer, not wanting to keep the vehicle much longer, again with the mileage, this was the least expensive option to do, as opposed to repairing it or replacing with a new unit. So, you know, had had much lower mileage and being newer, we could have done something like that but replace it with something new or rebuilt it. But let's just go through some pictures right now.

So after the installation, we just took the old one apart to see what was actually wrong with it. And we figured it was a bad bearing. So this is the transfer case separated. And you've got basically a big planetary gear on this side. There's a number of clutch packs in here that again, allow that four wheel drive control. This is the chain that drives between the front drive shaft and the rear drive shaft. 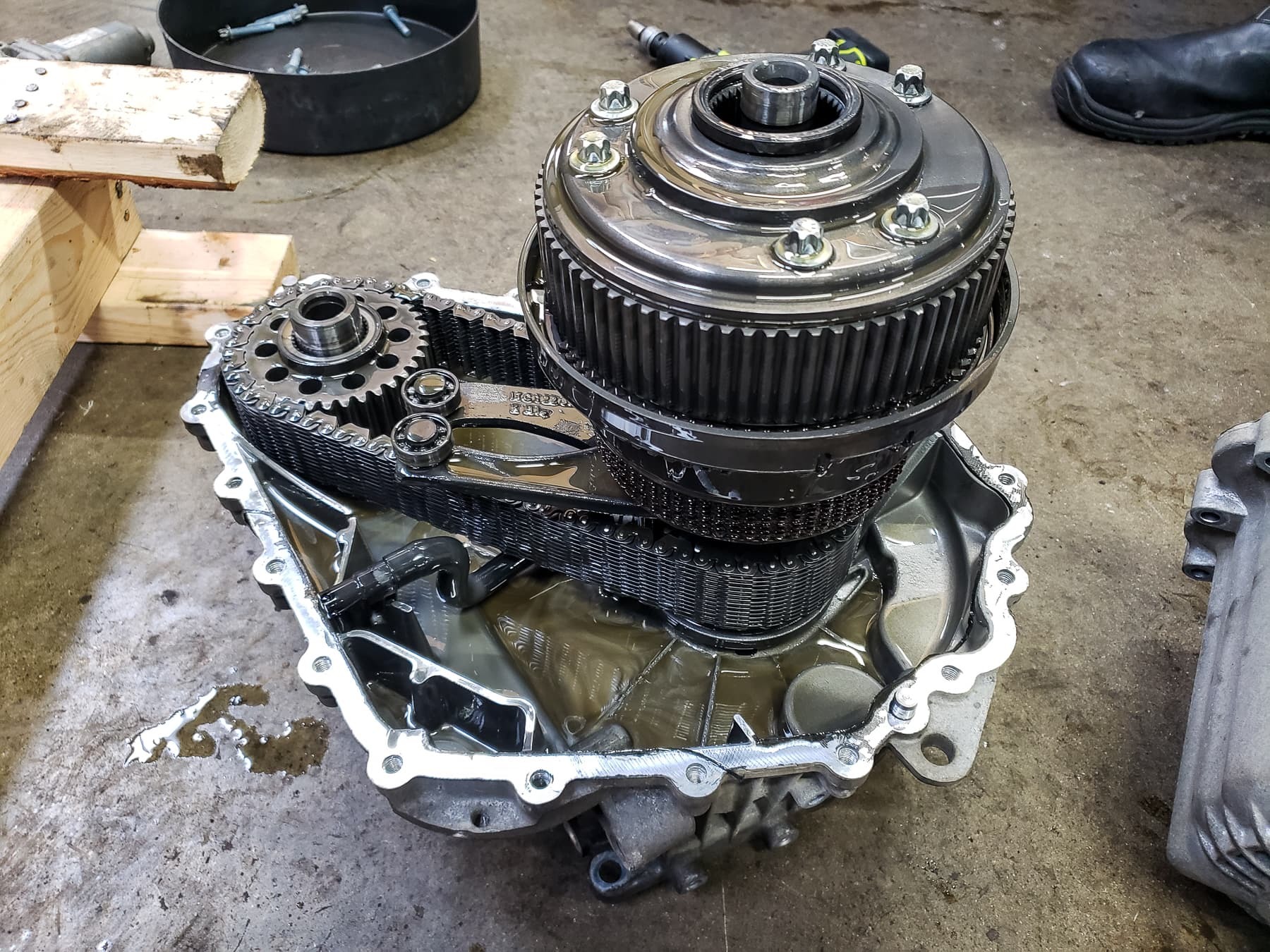 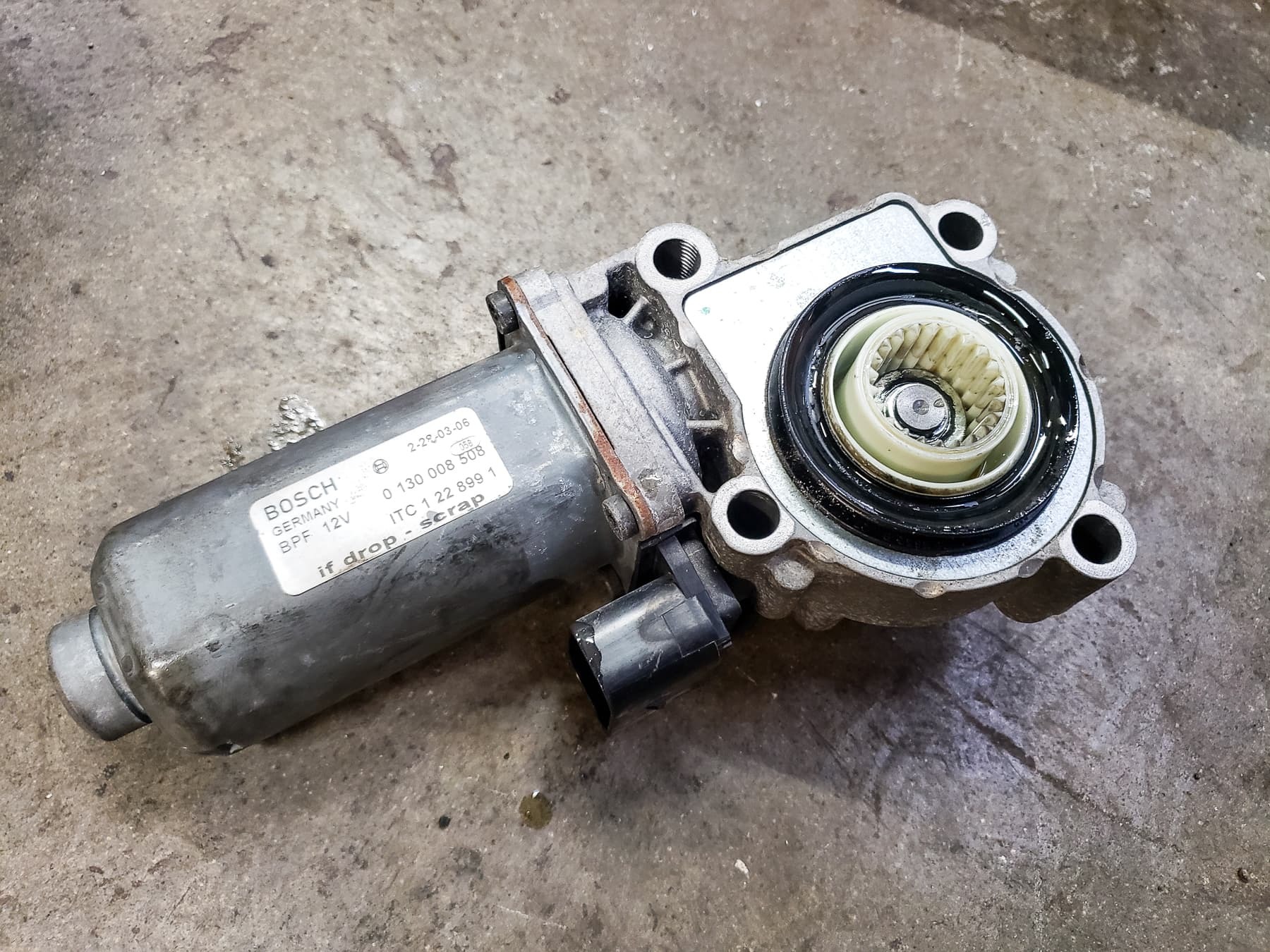 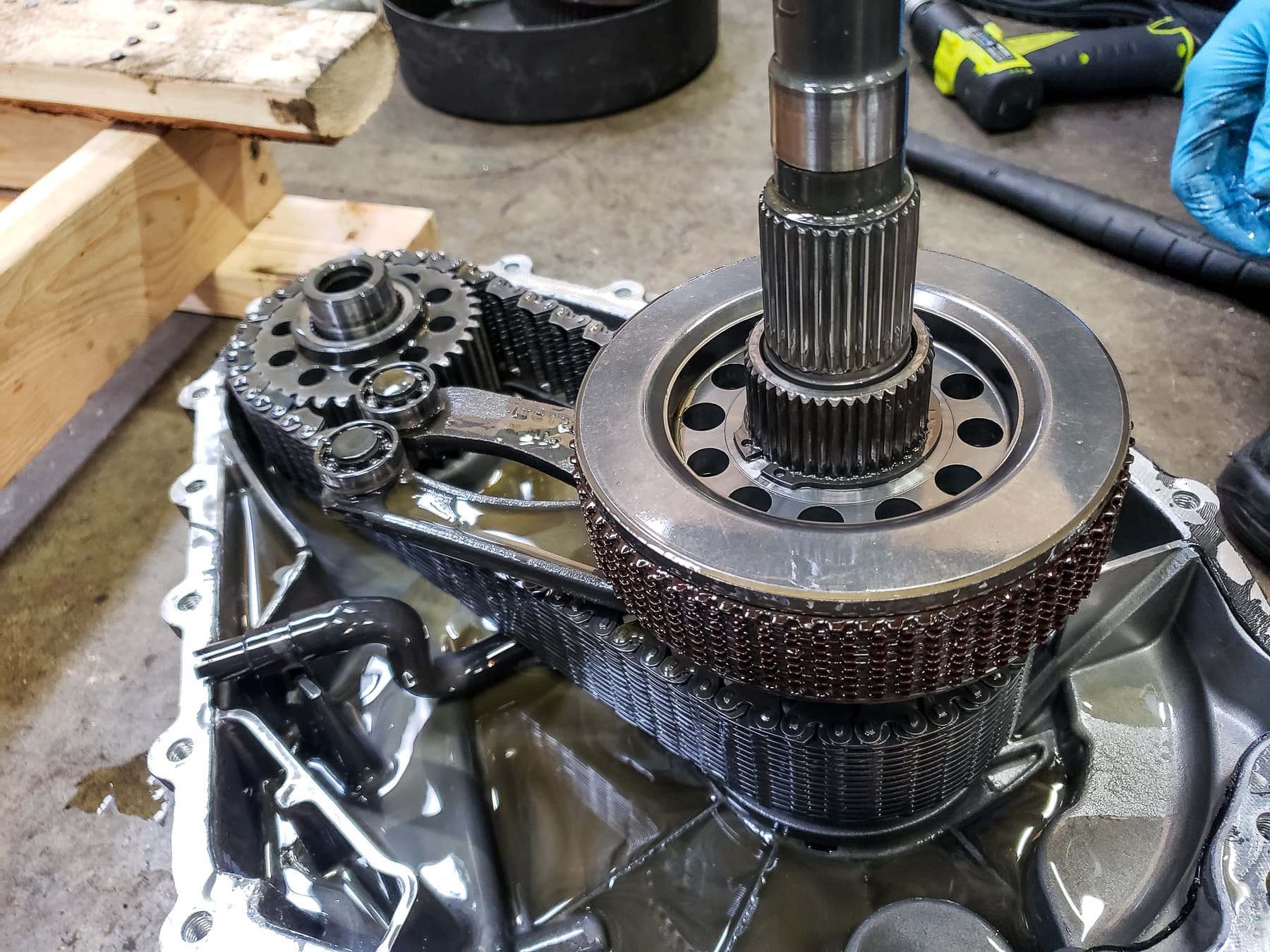 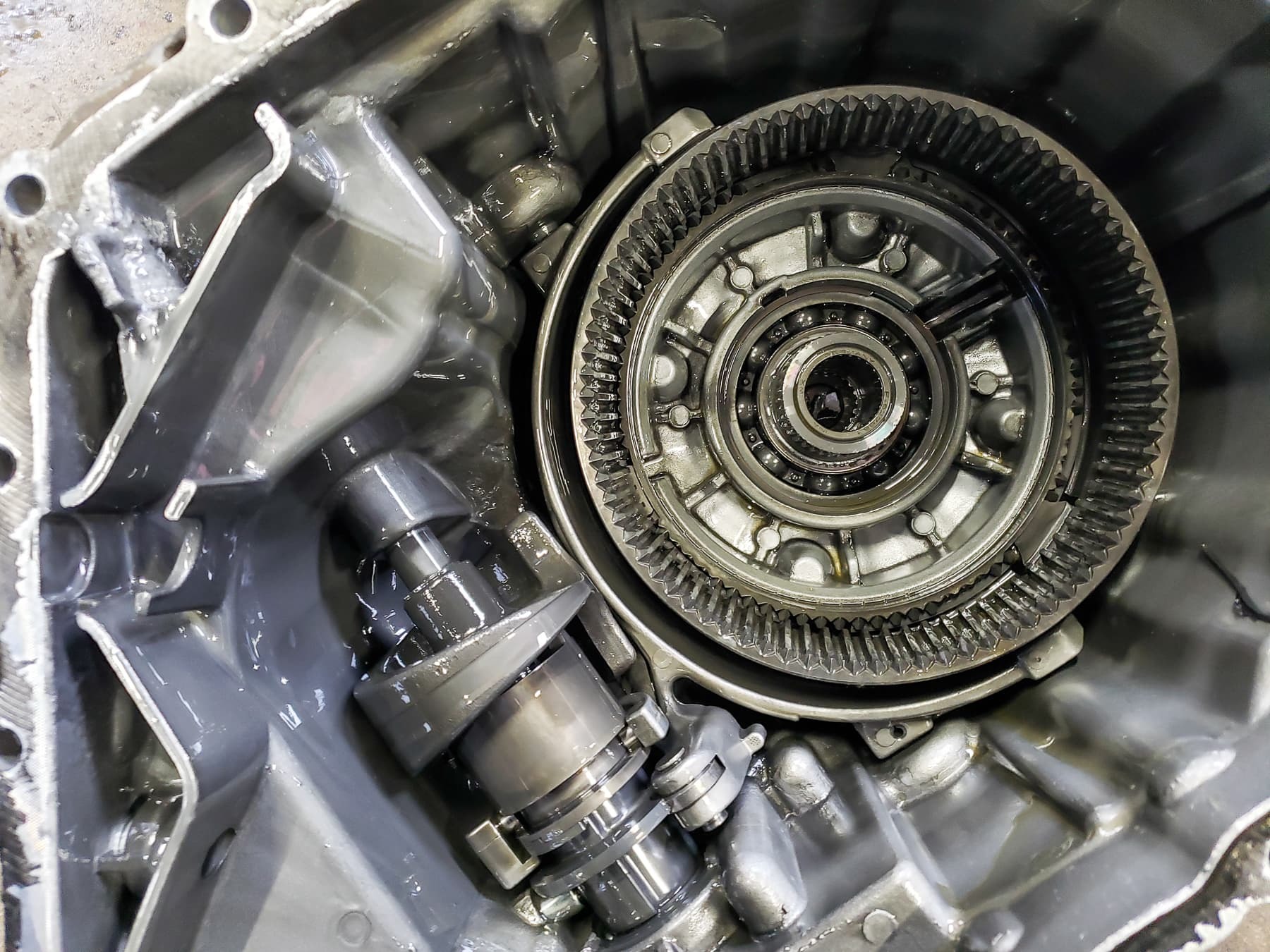 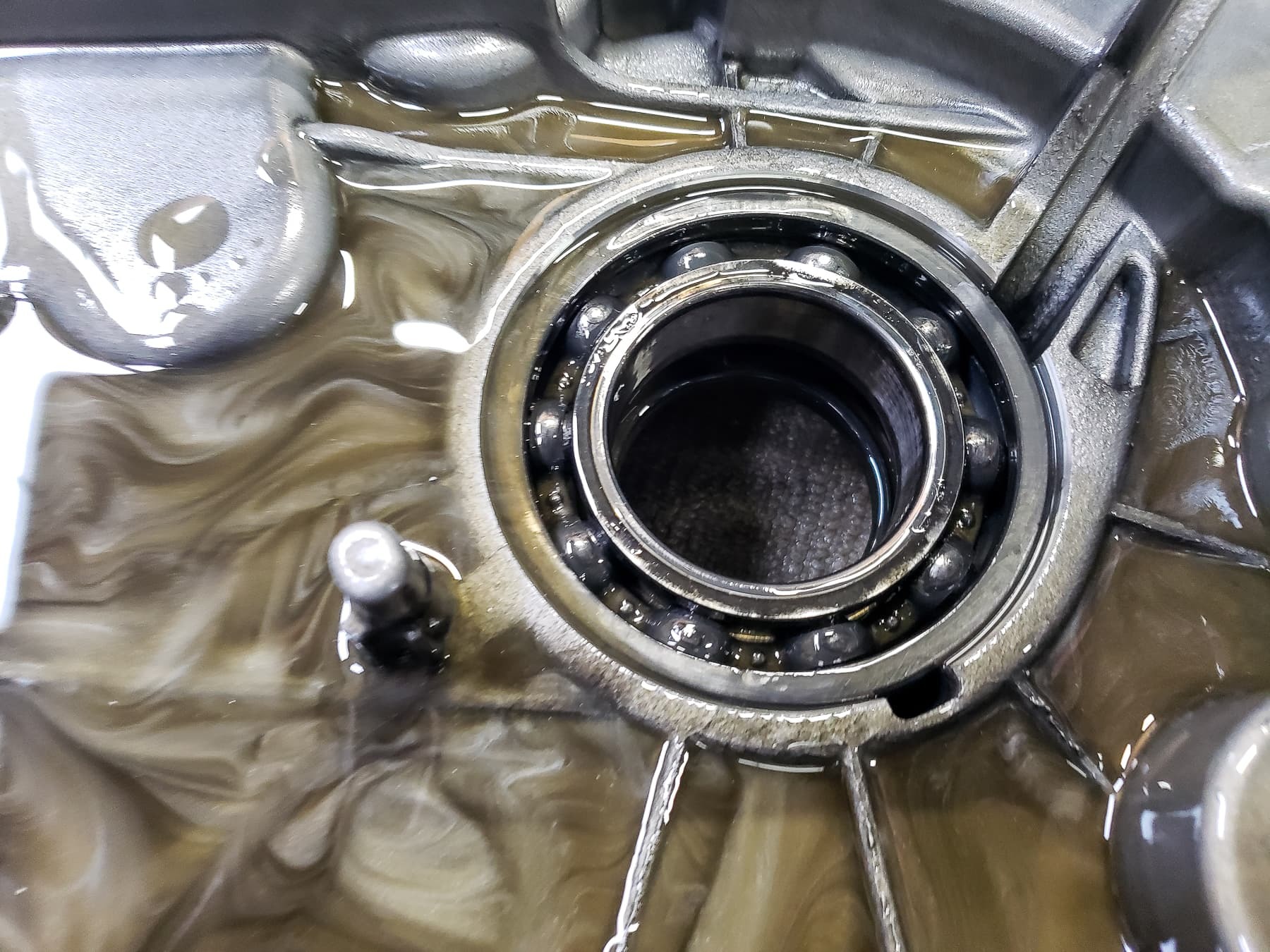 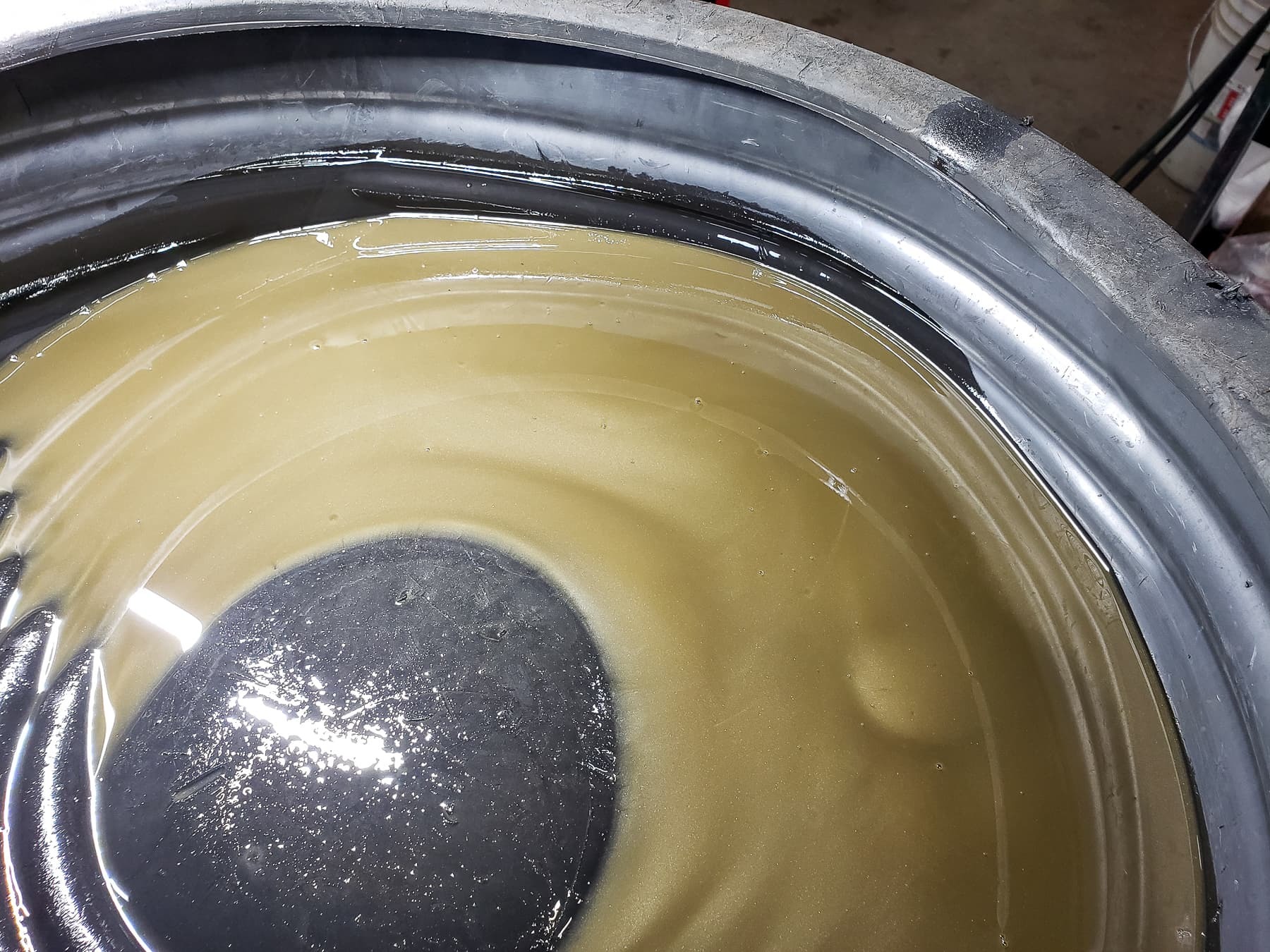 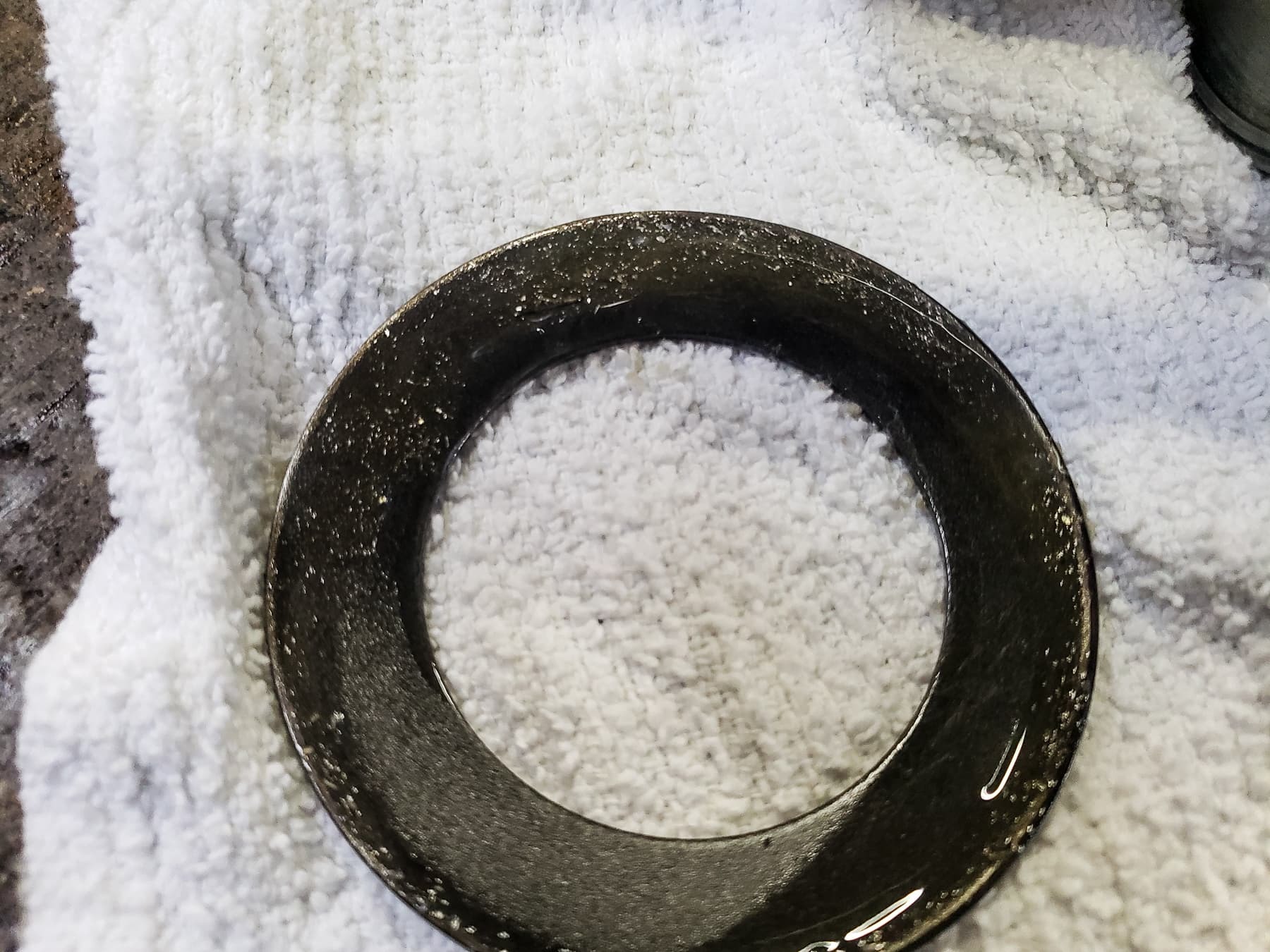 So the power generally goes through this direction. If you can see my mouse pointer, this goes to the rear drive shaft and this area here, this goes to the front. So again, you've got some nice big gears. That chain is enormous. It's probably about two inches. Thick you know, there's a lot of strain on that chain, so it needs to be tough and well-built, and that's actually an item that does wear out on transfer cases from time to time. The chain will stretch and you have like a banging kind of sound inside the transfer case, but not in this vehicle.

This is the actuator motor that controls the transfer case on this vehicle. Again, you know, in the olden days, you'd have a lever in your vehicle and you'd have to, you know, make sure you're either stopped or whatever condition in. You could pull this lever and shift into different drive ranges or four wheel drive and two wheel drive. But this is done electronically with this motor. Interesting little note on here, I noticed that if dropped, scrap. So you don't want to drop this motor because it'll probably be wrecked, although I guess you could try it and see, but there's the electrical connector right there. So that's the actuator motor, which sits on the side of the transfer case.

Now, as we tore further into it, again, you can see some of these, these are clutch packs. You won't find these on a cruder type of four wheel drive vehicle, but you will on the Land Rover because again, it's got the all wheel drive capability. So there's certain amount of slip in these clutches and there's controls that will make them, I'd say it firmer or less from like grippier or less grippier, depending on what's happening. And this is where using the proper fluid is also critical because it has certain coefficients of friction that are important. And if you don't use the right fluid there can be a problem.

So again, looking a little further down, there's a planetary gear. This is an item that's actually operated from the actuator motor. You can see it'll move various items to allow, you know, high and low ranges as well as different  four wheel drive. What am I trying to say?  Locking abilities. Looking further, and this is actually the culprit. It's the front bearing in the transfer case. This is what we found was worn. And this you can see a bit of the oil is left over and you see all these nice little, beautiful, artistic looking patterns. That's all metal particles floating around inside the oils. So that stuff is floating through the transfer case and of course grinding everything else up.

Could we have just changed this bearing? Possibly, but and cleaned everything probably would have been quiet, who knows how long it would last though, you know, with having all that metal in there that can really create quite a few issues.

This is the bucket of oil we pulled out of the vehicles. It's kind of a telltale sign of severe damage. Again, this oil should be clear and it's full of metallic particles. And what else have we got here for pictures? I think we're nearly done, not a little, you know, a few, this is a little spacer that goes next to the bearing. You can see all these little shiny bits those are all chunks of metal from the bearing.

Mark: So why a used unit? Why not just replace it with a new unit?

Bernie: Cost. I didn't, you know, I don't know that we actually even priced out the cost of a brand new transfer case. It would be thousands and thousands of dollars and used one is much cheaper. And generally these pieces are repairable, but you know, again with the time involved, it's a lot of extra labor to do it.

If it was a younger vehicle, I'd probably been worthwhile. We got a much lower mileage transfer case. So it shouldn't go for years. And you're asking if it's a common problem and I'd say it's not. These are pretty well built units. So with lower mileage, it should go over quite a few years without any further problems.

Mark: And so how did the vehicle work after you had done all the repairs?

Bernie: Oh, it's good. Awesome. Nice and quiet. And ready to tackle the city streets or the mountains if you want to go that far.

Mark: There you go. If you need to have some service done on your Land Rover, Pawlik Automotive are experts. You can reach them at (604) 327-7112 to book your appointment. Check out the website pawlikautomotive.com hundreds of videos on there on repairs on all makes and models and types of vehicles, types of repairs. The YouTube channel is the same, hundreds of videos on there. We've been doing this for almost nine years. We really appreciate you watching and listening to the podcast. And thanks Bernie.

Bernie: Thank you, Mark. Thanks for watching and listening.