Mark: So today's victim is a 2006 Mercedes Benz SUV ML350. What was going on with this vehicle?

Bernie: This vehicle came to our shop needing an alternator replacement. So that's what we did.

Mark: So how do you test the alternator?

Bernie: Well, there's a couple of ways you can test, what our sort of main go-to test is, we have a battery alternator starter tester, and like an AVR tester. We hook it up. And the first thing to test, you know, when any charging system issues to make sure the battery is in good shape. So it tests the battery first, then the alternator, test for the voltage output, the current output, and it also tests the diodes and components in the alternator, plus the test starter too. Basically the starter draw and see if there's any kind of unusual pattern of voltage, basically it'll sort of map the voltage patterns of the various components, which is important.

Mark: So, if that voltage pattern isn't correct, what does that mean? Where does that lead you to?

Bernie: Yeah, so the voltage patterns are really, what it's looking for spikes in the voltage. So we're just talking about the alternator. So I'll just speak about that. So an alternator is basically, as the word alternate, it generates alternating current into a vehicle that uses direct current. So if you know a little bit about electricity, the electrons flow from one circuit to the other in a continuous loop. Whereas alternating current, the electrons flow back and forth, back and forth, back and forth. I don't know how that really works, but it works. It's kinda one of those miracles of nature and we seem to have harnessed.

But anyways, the alternator basically puts out three alternating current signals. And there's a rectifier inside the alternative that converts a direct current to direct current. And you want it to be a nice clean 12 to 14 volt signal. If there's spikes, like say a rectifier dial blows it'll cause jumps and spikes and the current, and we can see that on our tester. So for instance, you might be getting like 12 volts and it'll jump up like 16 volts and back to 12, which is really not a good thing. So the tester picks that kind of stuff up really easily. So those are the kinds of things we test. So we did verify the alternator was bad in this vehicle and the battery was good and the starter was drawing normal power. So the alternator replacement was what we needed to do.

Mark: So with the blown diode, does the alternator cause other than just it does not charging the battery, I'm assuming, what else would it ruin the battery? Would it hurt the starter?

Bernie: Yeah. So a blown diode won't cause any issues with the starter, but it can cause issues with the battery. But it can wreak havoc with your electrical system. One example that I think about a lot that I kind of learned in earlier days, Subaru's around the late nineties, they'd often have blown diodes in the alternators.

And you could tell not only the alternator would make an unusual sound like a humming sound, sounds almost like a worn bearing, but it's not a bearing, but it makes a humming sound that can often be an indication the diodes blown. But you drive the car and they have a tachometer and the engine would rev up and when the engine was like 2000 RPMs, the tachometer pinned the needle at over 6,000. And it's because you're getting these extra voltage spikes through the system. And somehow the way the electrical system didn't filter that out. So it would cause the tachometer to do weird things. But there are a number of things you'll see in other vehicles like light bulbs that flicker or it can cause all sorts of weird running issues.

So you definitely don't want to drive a car with a blown alternator, even though it might actually charge the battery just fine. It's not as good as it should be, but the output might be adequate to keep your battery fully charged. So this is a good reason. And actually when we do a B service on the vehicle, we always test the charging system. A lot of times you may not even know your alternator has blown diodes, but we can tell and then recommend replacement.

Mark: So what about a bad battery? Can that cause a problem with the alternator?

Bernie: It can. Actually a bad battery can definitely cause alternator problems. So an alternator is basically, it's generating electricity and it's pumping it in, we can think of like water being pumped through a hose. It's pumping the electricity, the water back into the battery. Now, if the battery is bad, if it's got high resistance, which happens as batteries get old, the alternator's working harder to force that electricity into the battery. And so the alternator, which is maybe supposed to work, say I'll just take some random numbers, they go 10% of the time while you're running, it's now working like 30%. So it's overcharging, it's overworking. And of course that can shorten the life of the alternator.

So there are many times where, you know, on vehicles we do tests and we find the alternator and battery are both bad and we end up replacing both. So sometimes that happens. So this is another reason that it's important to have a good battery in your vehicle because a bad battery will shorten the life of your alternator.

So how difficult is the alternator replacement on a Mercedes ML350?

Well, on this vehicle is not too bad, actually. We'll look at some pictures. So there's our vehicle. 06 ML350. In great shape still.

Pictures alternator. So this is a V6 model gasoline engine. 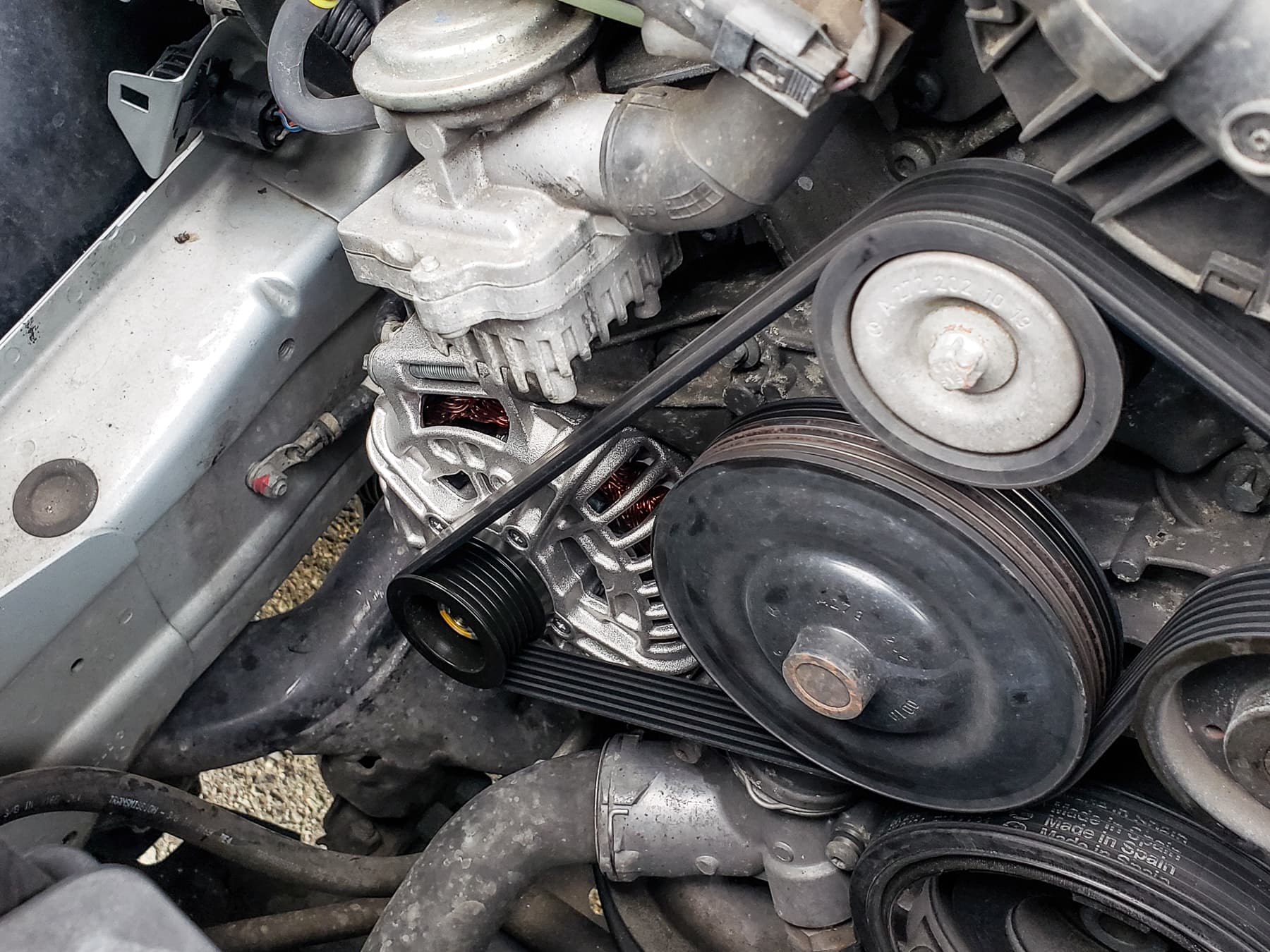 The alternator is pretty easy to get it. Here's the alternator right here. So this is kind of a view. I lifted the engine cover off, which partially blocks it, but it's really not too difficult to get out. The belt has to be removed of course, but it's not really wedged in there like a lot of other vehicles could be. It's not really a super bad job.

Again, here's the front view of the engine. So there's your crankshaft pulley, your serpentine belt. These are a couple of idler and tensioner pulleys, a water pump. Power steering pump should be over on the right. 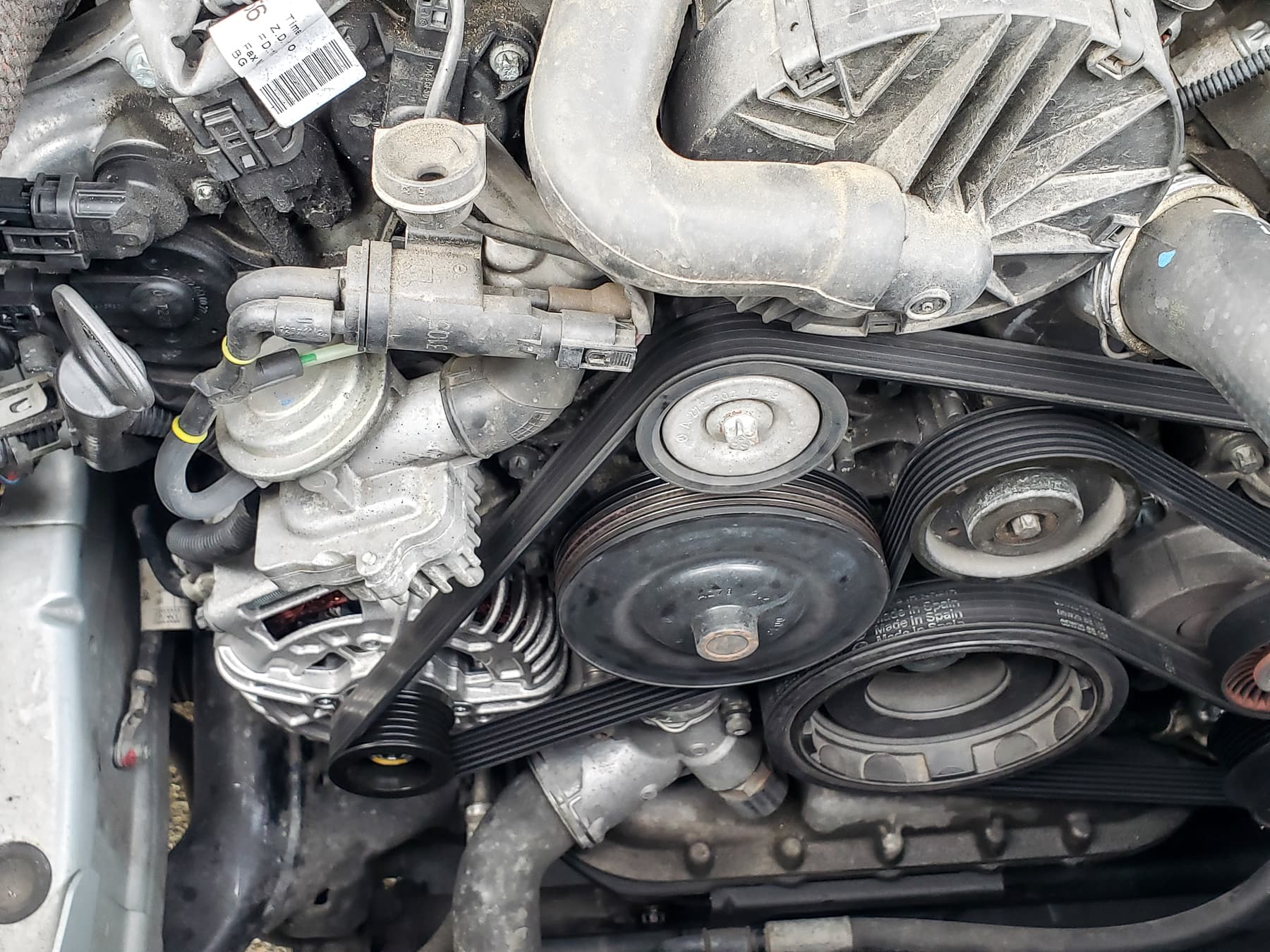 Another view of the alternator from the passenger side of the engine compartment. 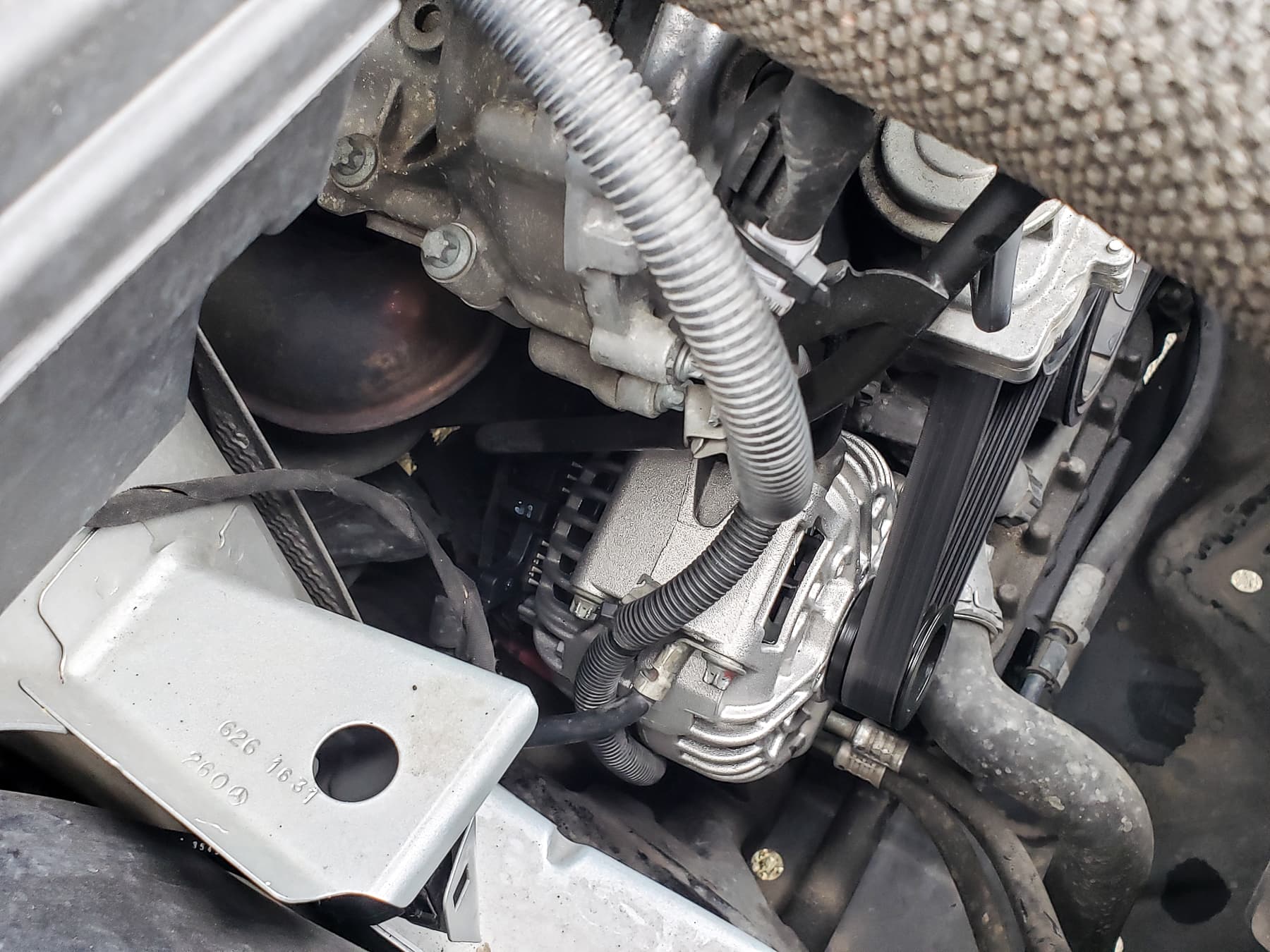 So yeah, it's a bit of work to take it in and out. And of course, this is the electrical connector to the alternator. But overall, you know, not really too bad of a job to do on a car like this. There's our picture show.

Mark: After replacement, everything ran fine?

Bernie: All worked great. Yeah, we do a retest afterwards. Make sure all the outputs are good and everything's in good order and it was all good.

Mark: And so how are ML350s for reliability?

Bernie: Well, this is actually a vehicle we do talk a lot about on our podcasts. I mean, overall they're pretty good. Depends on what kind of engine you have in yours though, of course. The diesels are, we won't talk about the diesels because there's a lot of podcasts where we explain the, yeah, your face says it all. There's a lot of issues with the diesels. The gasoline ones are pretty reliable. V6s probably, you know, this is probably a good option. V8s work well too. Obviously higher fuel consumption, but some of them go pretty good. Especially the newer ones. There's AMG versions of these too. But they are a fancier vehicle.

There's a lot more stuff to go wrong with than your basic car. But you know, depending on which model you buy, they're generally a pretty reliable vehicle. This one for an 06 is in great shape. And I don't think it's required a lot of work. So pretty good car overall.

Mark: Maintain it properly, it will last, you give you a really long life basically.

Bernie: Yeah. And even the diesels will give you a long life, but you'll just spend a lot more money fixing stuff. And it's important to buy the right vehicle for your usage. If you're just driving five kilometres a day just to get groceries, don't buy a diesel. You'll end up spending a lot of money, fixing it, and not saving any money on fuel.

Mark: If you're looking for honest service for your Mercedes-Benz in Vancouver, BC, Canada, the guys to see are Pawlik Automotive. You can check out the website pawlikautomotive.com. There's hundreds of videos on there. All makes and models of vehicles, all types of repairs. 10 years we've been doing this. As well there's the YouTube channel, same story. Pawlik Auto Repair. You can search on YouTube. Or you can just give them a call. You can actually book on the website or you can call them and actually talk to somebody (604) 327-7112. You have to call and book ahead because they're busy. So they might not answer the phone instantly, but they will call you back and have a conversation. Get ready for when you show up and make sure you get the service you need as soon as possible. Pawlik Auto Repair in Vancouver. Thanks Bernie.