Mark: So 2006, Mercedes C280, had an engine mishcon, mishfire, misfire. What was going on with this car?

Bernie: Yeah, so the owner had called, she was heading off on a holiday shortly and was concerned the engine was running rough and that her check engine light was on. So brought it in for us to have a look at.

Bernie: Well, we've definitely verified the engine was misfiring. First step was to hook up our scan tool, do a scan of the vehicle. See what sort of trouble codes were stored. And we found a code for a engine misfire, a random misfire, along with a cylinder four misfire and a code indicating a, I think it was either a short or open circuit in the ignition coil to cylinder number four. So that's pretty clearly put us in the area and direction where the issue may be occurring.

Mark: So you've found out which cylinder it is. What is the next step?

Bernie: So the next step is to verify that it is in fact ignition coil or spark plug, or see what it is. So I'll just share some pictures here because what we did for the next step was to, and there's our C280. 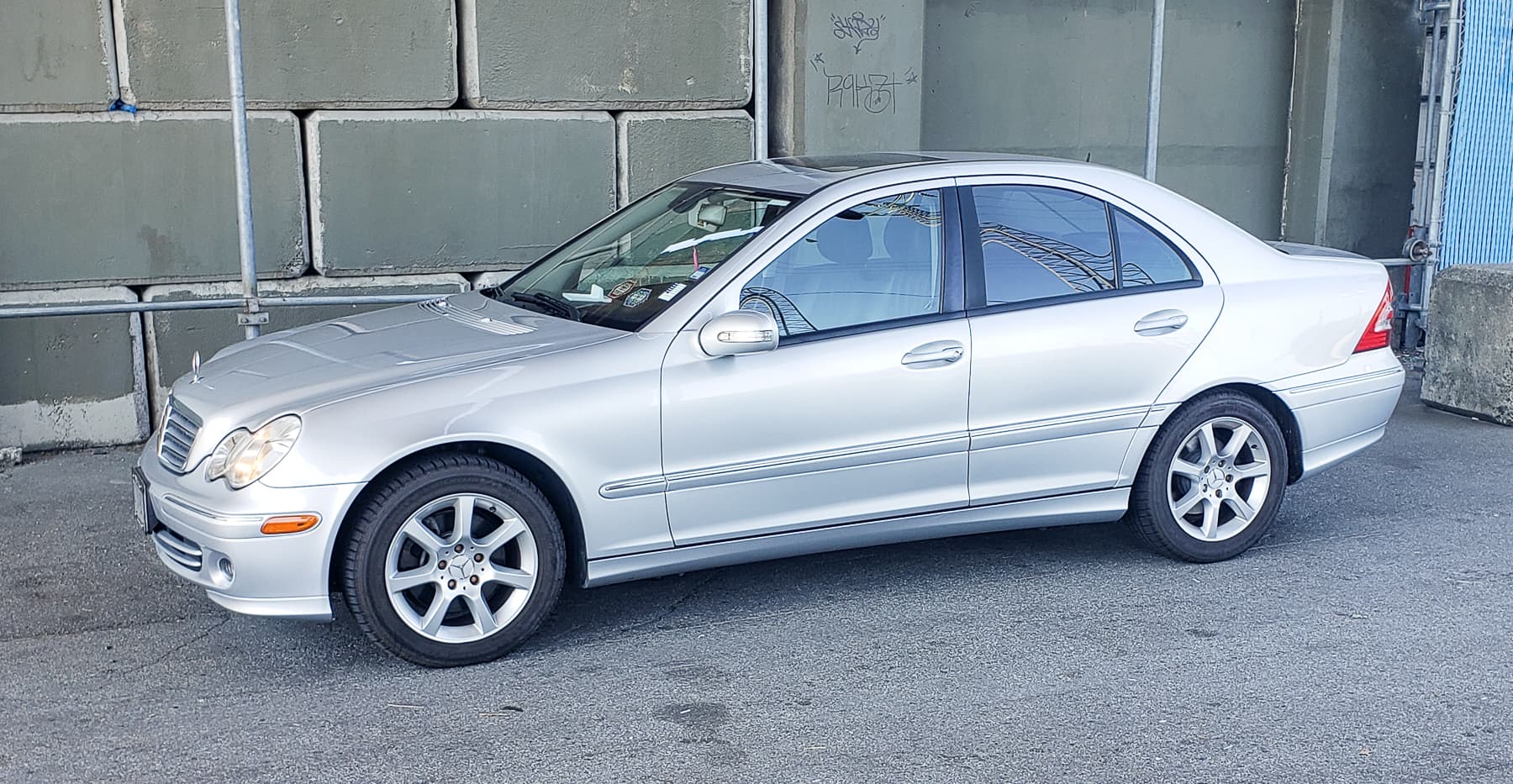 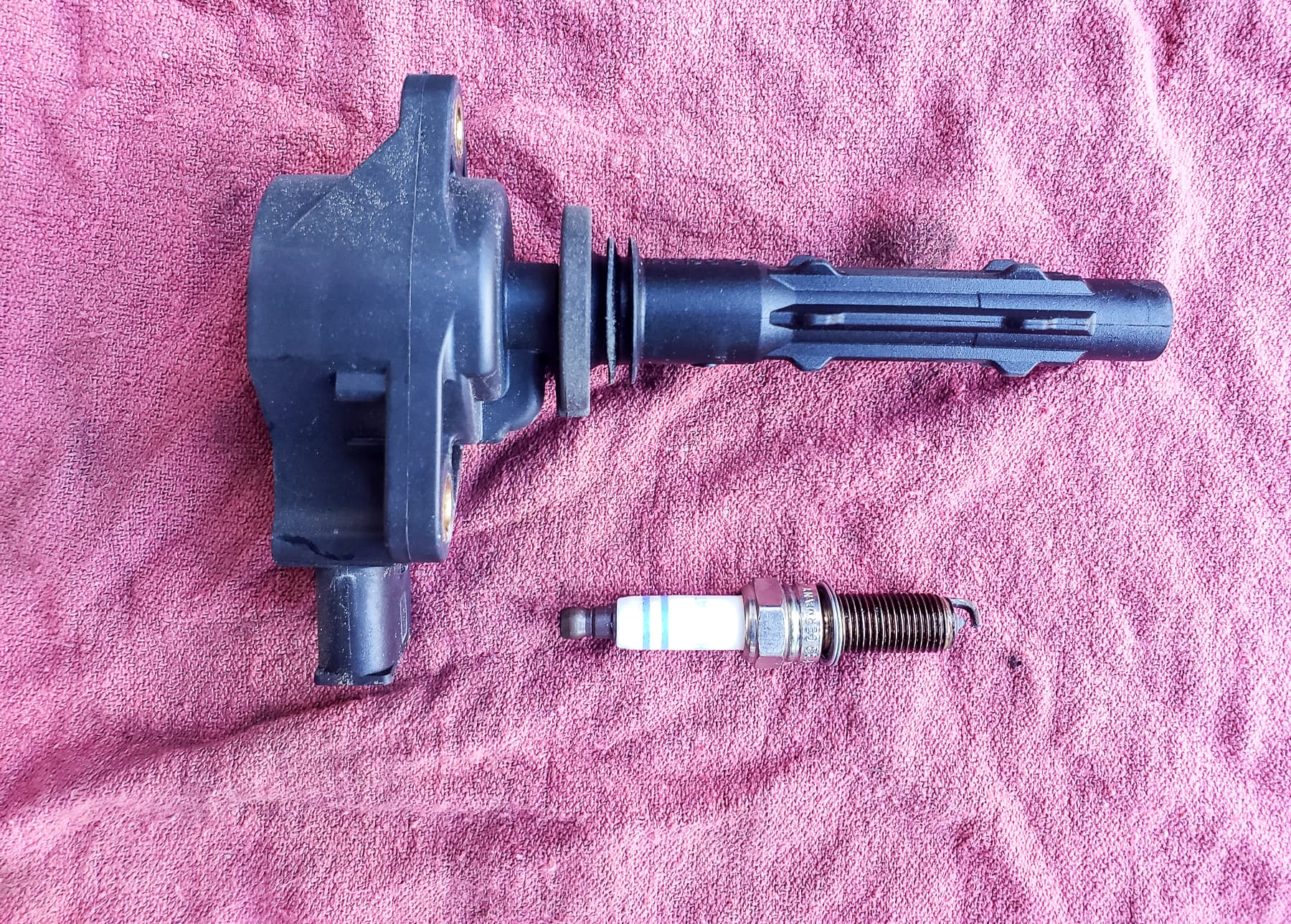 Next picture, is to hook up a lab scope to actually look at the firing pattern of the ignition coils. So this is what we see on a lab scope. This is a firing pattern of a good ignition coil you can see and I'm horrible at explaining the details of this there's people that are much better, but you can see a lot of, let's call it electrical action here. Voltage. This is when the spark is actually fired at this moment here. I'm going to go into show you the bad coil. So this is number four cylinders coil, as you can see, there's no energy buildup. There's no energy release. It's just basically one little firing, you know, issue occurring.

So that pretty much indicates the coil's bad. Doesn't a hundred percent prove it because there could be an electrical issue as well. So the next step was to swap the ignition coils from one cylinder to another. Now sometimes you can just do this and verify if the problem follows with the codes, then you know the problem's there, but I figure it's easier to, you can get some good evidence on what's actually happening in terms of, again, here's the good pattern. Here's the bad pattern. See if it follows. So I swap the coil from cylinder four to five, pull the spark plug out to visually inspect it. They were original spark plugs, looked okay. Vehicles only got 87,000 kilometres, so it's still pretty young, but you know, 2006, that makes it about a 15 year old car at this point in time.

So the spark plugs are old. Anyways swapped the coils, retested the pattern, the problem followed the ignition coils. So we knew a hundred percent, it was ignition coil in number four cylinder that was causing the issue.

Mark: So you just then replaced the bad coil and that was it?

Bernie: Well, that was one option. But when you take the car and you go, okay, it's 15 years old, one coil has failed. There's six in total. It makes more sense to change the coil and the plugs at the same time. Of course we always give our customers options and we ended up changing the spark plugs and the ignition coils at the same time, just based on the age of the car and the probability that another one would likely fail soon.

You know, we've had in the past where we've done one coil. Then a month later, two months later, maybe six months, you know, another one fails, then you're back diagnosing it. There's a charge for that looking everything over. And then you end up spending more money in the end. It's better really to, if you can afford to do it, do it all, get it done. And then you'll never have to worry about it again because this car probably won't be in this owner's hands, 15 years from.

So here's just another picture just to finalize things. That's this is the ignition coil, and this is a spark plug. This is the old build units, but new ones look basically the same.

Mark: And so harder to run them once everything was back together and tested?

Bernie: Well, I'd like to say these are Hollywood podcasts. It's always a happy ending or almost always. Yeah, no it ran great. Yeah, car ran fantastically. Just for a little extra thoroughness, of course we cleared the codes. Road tested it and actually looked at the there's, you can monitor misfires on a scan tool, it'll show any misfiring issues. Drove it for a while, nothing at, all it's perfect. So yeah, it ran great. And I wouldn't expect there to be any problem with this for quite a long time, especially the coils and plugs.

Mark: And how are these C280s for reliability?

Bernie: Yeah, it's a good car. I mean, it's a fairly basic for a Mercedes, although, you know, basic is pretty luxurious. This car is kind of interesting because it actually doesn't have power seats, which is really strange for a Mercedes. But but yeah, it's a nice car and, you know, actually the fact that it doesn't have power seats actually makes it a little more basic and less to go wrong. But overall good car, good reliability.

We've serviced this car for many years and the owner drives it very little. And this is the first time there's I think this and a belt problem has been about the only thing that's really gone wrong with the car. So it's been quite good.

Mark: If you're looking for service for your Merc in Vancouver, the guys to see are Pawlik Automotive. You can reach them at 604-327-7112. To book your appointment, you can go to the website pawlikautomotive.com. You can book online there. They will get in touch with you. They'll get prepared for when you show up and make sure that they're ready to service your car as soon and quickly and as efficiently as possible. Of course, you can also check out the website. There's hundreds of videos on there. The YouTube channel Pawlik Auto Repair, hundreds of videos, not stretching it at all, over 900. And of course we really appreciate you watching and listening. Thanks Bernie.