Friday’s featured repair is a 2006 Subaru Forester Rear Strut Replacement brought to us by a client from Point Grey, Vancouver. 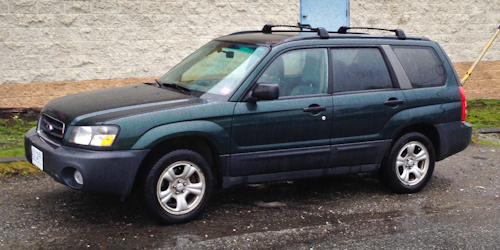 Subarus like most Japanese cars have good quality shocks and struts that last a long time. This Subaru had spent some of its life in salty road conditions and this likely lead to an earlier death of the rear struts.

The term strut is short for Macpherson Strut, a rather brilliantly designed suspension component that incorporates the shock absorber, coil spring and upper suspension link all in one assembly. When we refer to replacing struts most of the time just the shock absorber section is replaced.

How can you tell if your struts are worn out? There are several things to look for: 1) oil leaking from the strut, as was the case with this vehicle; 2) a bouncy ride; 3) clunking or creaking noises on bumps or turns (these may be caused by other suspension components as well); 4) “cupped” tire tread wear.

While many shock and strut manufacturers recommend replacing them at 80,000 kilometers this is really overkill in most cases. It is best to evaluate each car with every inspection to determine condition.

Strut replacement can be a costly service, so many vehicle owners choose not to do it. While worn struts don’t pose the immediate safety concern that bad brakes do, they reduce stopping distance and vehicle control. Not replacing your struts could compromise your safety!

For more about the fabulous Subaru Forester click here http://en.wikipedia.org/wiki/Subaru_Forester

For more about shock and strut wear and symptoms click here http://www.kyb.com/vehicle/effects.php

Worn out and leaking rear strut from 2006 Subaru Forester