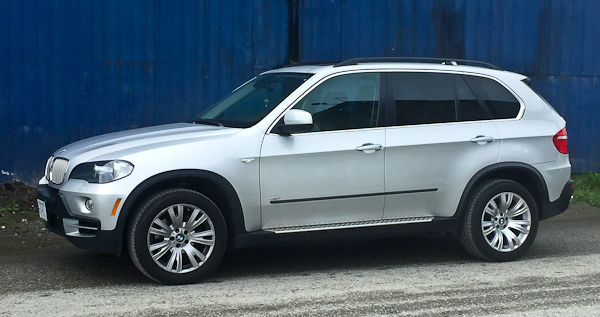 Mark: We’re going to talk about a BMW X5 - it had a coolant problem? What was that?

Bernie: The owner of the vehicle called us and said he some greenish coloured liquid dripping in his driveway and so he wanted us to have a look at the vehicle. So we brought the vehicle in and had a look at it.

Mark: So what was the concerns with the leak?

Bernie: Well basically our first step was to put the vehicle up on the hoist, and being a BMW we removed a number of covers underneath the engine area so we could see the bottom of the engine, had a look and didn’t find anything, which was surprising. We put our pressure tester on, had it on for about 10 minutes. Our expectation was there would be something dripping out quite quickly and easily determine what it needed. But after an hour, there was nothing under there and we were almost about to give it up and say that obviously whatever is leaking is so minimal we don’t need to worry about it because his coolant level was actually full. The owner said he put in a small amount of antifreeze, but it was very, very minimal. We looked for a little longer and found there is actually some dripping right at the very back of the engine but really, really small amounts. From that point, everything is hidden under this BMW, we had to look quite a bit further.

Mark: So where was the leak actually coming from?

Bernie: Eventually we found the leak coming from the valley pan. I’m going to show you some pictures here. The valley pan sits in the center of the engine. This is a screenshot view, this is a view actually of the intake manifold with the engine removed. On your right and left side you can see a sort of cylindrical silver object, more noticeable on the right side, those are the two cylinder banks were the cylinder heads are located. So the valley pan sits in-between the two heads and on a BMW V8, there’s a pan that the yellow arrow points to. This valley pan has a gasket around it and that’s full of coolant underneath. The red arrow actually points to actually where the leak was located and here’s a closeup view of sort where that red arrow, oops I’ll just go back here, this is the red arrow and this is a close up view of that area. You can see a bluish coloured bolt, sort on the center of the picture, there’s a bluish colour looks like crystals or liquid, anyways that’s where the coolant was coming from. It was seeping down the back of the engine and seeping around the front of the engine sometimes, the leak was very small at this point so it took a long time for the coolant to build up and seep over the sides of the vehicle. Yeah, so that’s basically where we found the leak coming from. Just to put things into perspective, this is what the engine looks like with everything intact and that red arrow I’ve got there points to the intake manifold which is a very large plastic object that must be removed before we could even find out where the leak was coming from. On top of it is the air filter box so there is a lot to remove here to get at the leak. We weren’t quite certain where the leak was coming from until we removed the intake manifold because there are coolant pipes, I’ll go back a couple of pictures here. There are pipes that run across the top of that valley pan and where the green arrows are pointing at the bottom of the picture, those point to the different pipes, coolant pipes. So these can also have leakage, there’s O rings and seals at either end and those can cause leakage too. So in this case, it was a matter of dismantling before we could find the leaks. 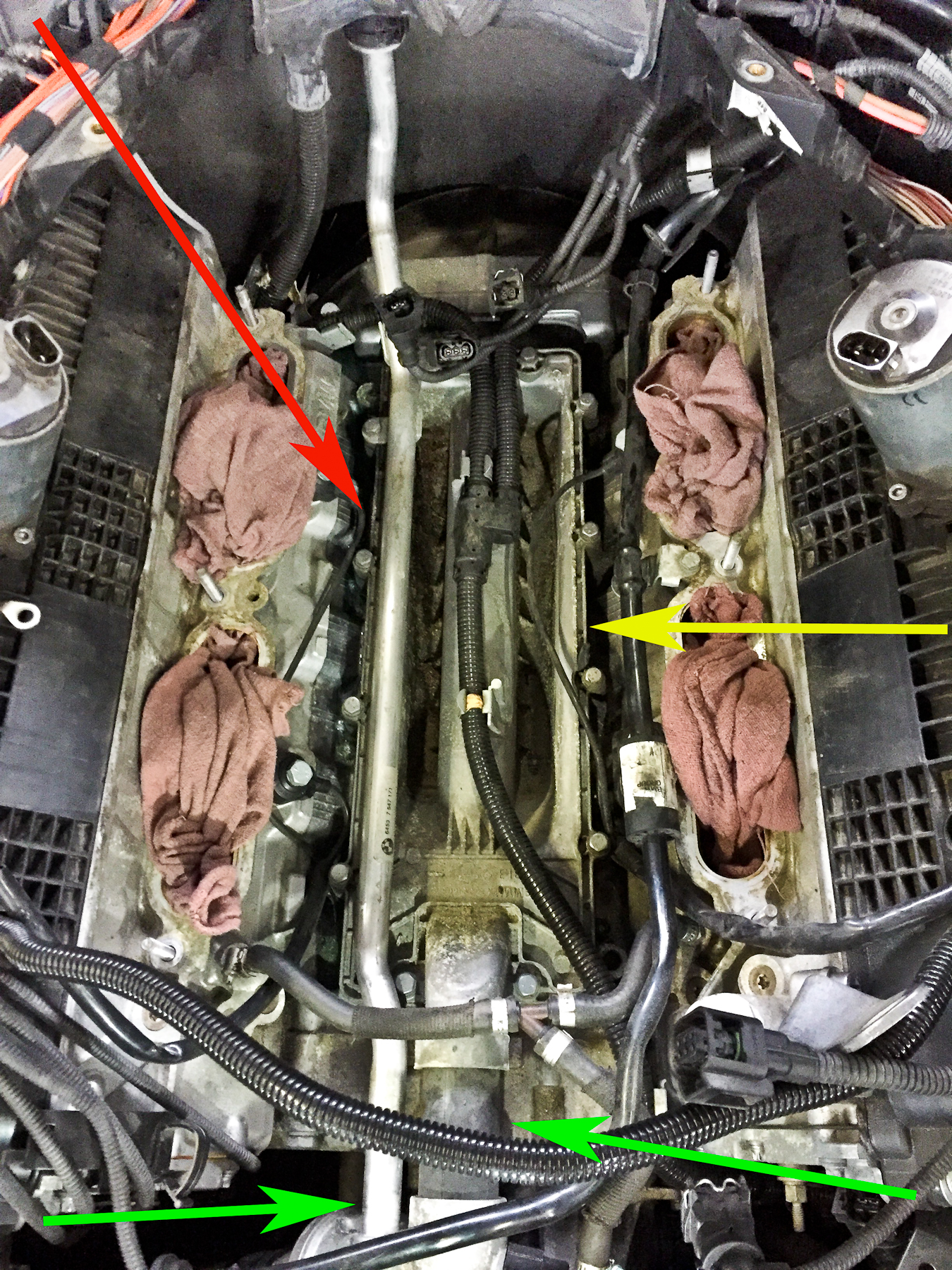 Bernie: Well once we actually found the leak, it wasn’t so much of a job because about two thirds of the job is to remove the intake manifold and reinstall it. So from that point we removed the valley pan, changed the seals on the heater pipe, and there’s a pipe at the front, we changed that pipe, it actually all comes as one piece so we changed those and then put everything back together. So it’s a fairly labour intensive job but it’s better than it used to be. The older BMW 4litre V8’s had a valley pan as well, but it had twice as many bolts, it was much larger and had a number of pipes going across it. They’ve actually improved the design of this although, you know, it’s still obviously not perfect because it leaked. But it’s an improvement over the past. 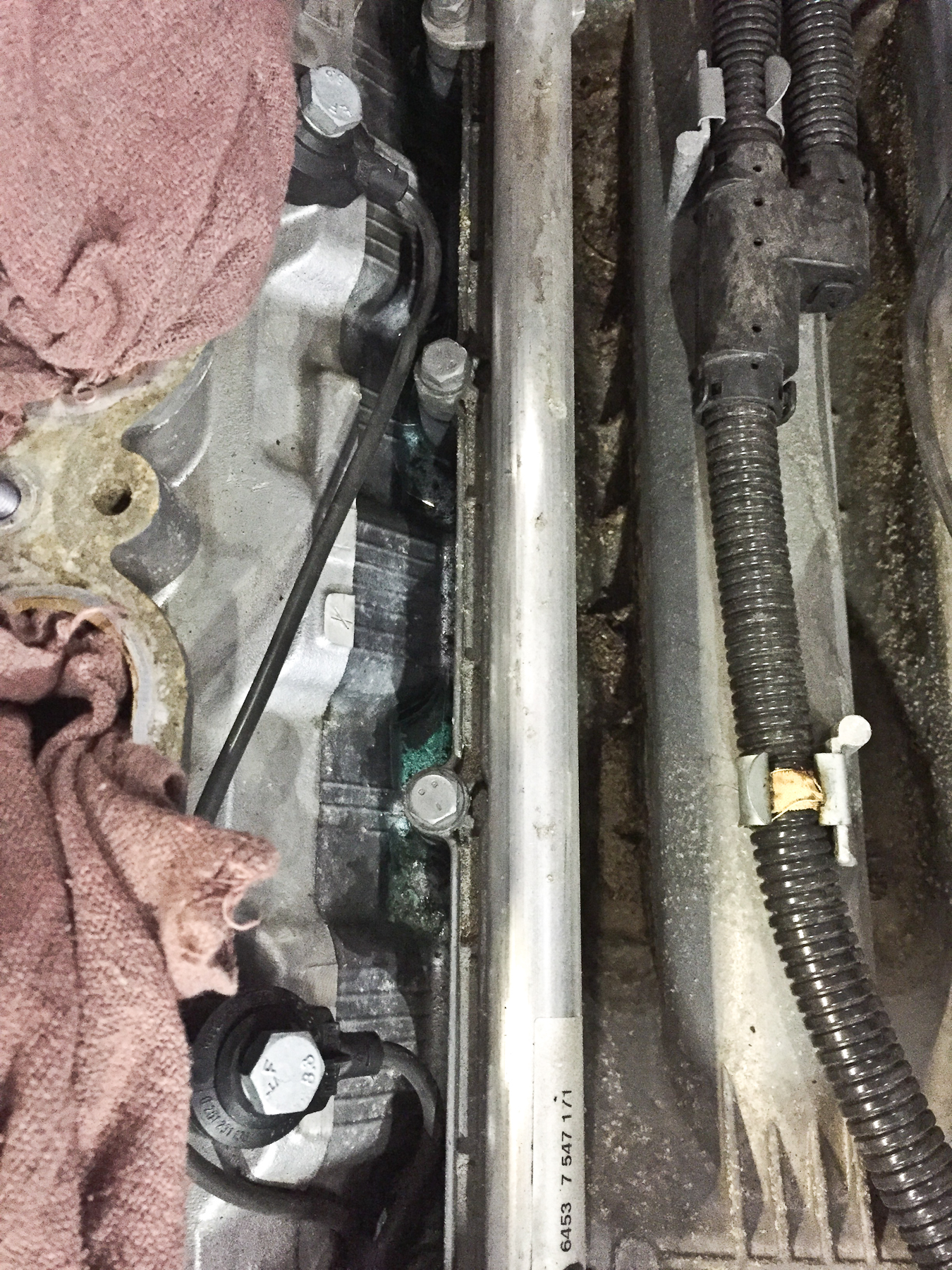 Close up view of coolant leak on left side of valley pan. The blueish coloured material beside the bolt is antifreeze.

Mark: So any other further thoughts on coolant leaks on this vehicle?

Bernie: Obviously the valley pans are issues, water pumps on BMW’s are problematic over time. I mean on this one, the kilometres are fairly low on this vehicle, the water pump is good and everything else is good. Typical to BMW they use a lot of plastic components in their cooling system so they do fail but that usually happens when the vehicle gets older. This one is a 2007 so it’s still not that old, give it another ten years, there will probably be some plastic hoses and bits and pieces breaking but for the time being, it’s good. This 4.8 litre engine is definitely redesigned, it’s an improvement over the previous generation for 4 and 4.4 litres.

Mark: So if you’re looking for service for your X5, for your BMW products, the guys to go see is Bernie, Pawlik Automotive, I got Bernie and Pawlik mixed up there. Give Bernie a call to book your appointment 604-327-7112 in Vancouver or check out their website pawlikautomotive.com. Thanks Bernie 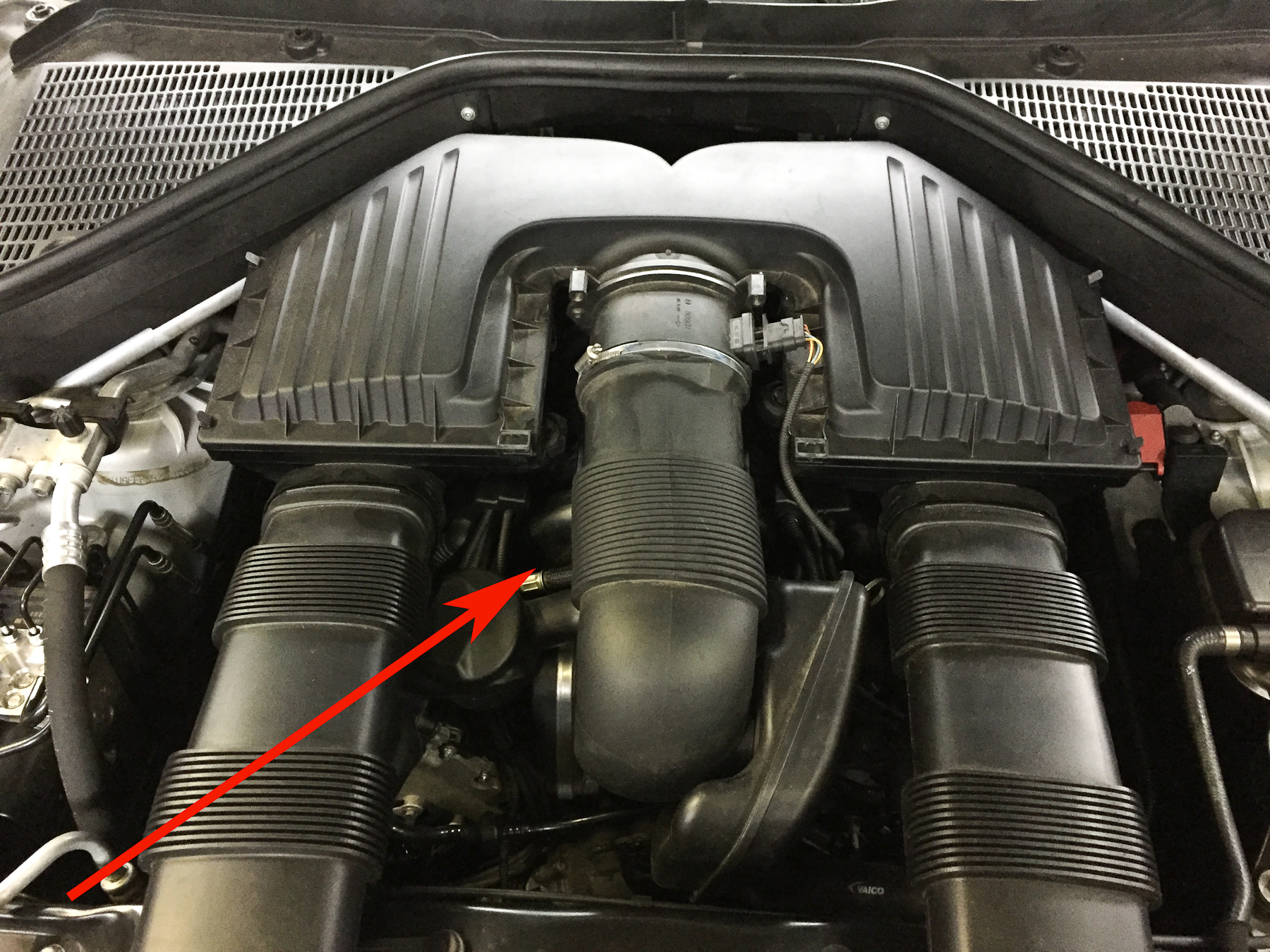 View of 4.8L engine assembly. The red arrow points to the area of the valley pan located below the intake manifold and air filter box.