Our client’s F150 came in with a ticking noise under the hood and a strong odor of exhaust in the cabin. After diagnosis we found the leak coming from the rear of the left manifold.

We removed the manifold and measured the flatness of the surface and found the rear port severely warped. It was warped so badly that we suspect that it may have been poorly manufactured in the first place.

Our trusted machine shop resurfaced the manifold and insured that it was absolutely flat. Once reinstalled with a new gasket the truck left the shop quietly. All exhaust exited the tailpipe as the manufacturer intended.

For more about the iconic Ford F150 which made its debut in 1948 check out this link http://en.wikipedia.org/wiki/F150 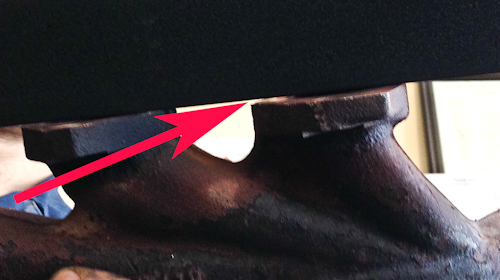 The exhaust manifold after resurfacing. The warp has been removed