Mark: So today's victim is a Jeep Compass, 2007 version. So a little bit of an older vehicle that had a starter issue. What was going on with this Jeep?

Bernie: Yes. This vehicle when you go to turn the key to start, it made the most horrific sound. I don't have a recording of the sound. It would be good, but you know, if you've owned a car or you may have had a car where the starter grinds, maybe sometimes intermittently, this was like a grinding, howling sound, I'd never heard in my life. It was pretty horrible. So definitely something was wrong with the starter.

Mark: What kind of testing and diagnosis did you do then?

Bernie: Well, a lot of it is you know, it's with the ear, for starters. I mean, there are many things we can check in a starter issue, like test the battery. That's always a good place to start. Make sure the engine, depending on, depending on the sound, you know, depends on how the engine, maybe just make sure the engine cranks over. You know, after fixing cars for so many years, I've kind of developed ears for certain sounds.

And you can tell certain parts of starters that are bad. So I figured in this case, it was probably either the starter motor was just something that was completely wrecked with the motor or the actual ring gear was damaged really badly as well. But usually again, the ring gear has a different sound, but I think what warranted our next sort of step. I'm probably jumping ahead of our questions here, but our next step was really to basically to remove the starter. Inspect the starter and the ring gear and make sure the engine turned over. But really look at every tooth on the ring gear, make sure it wasn't damaged.

And just so you know, a ring gear is basically a big, large gear that's on the crank shaft of the engine. Very large. It's usually about, at least a foot to 18 inches in diameter and it has teeth. And the starter motor has a little gear that makes the engine spin. So that's kind of how it works.

Mark: So once you removed the starter, what did you find?

Bernie: Well, this is good. We gotta go straight to pictures for this one. So there's our Jeep Compass. Bit older, pretty high mileage on this vehicle. It's been well used, but still working really well. Yeah, this is what we found. 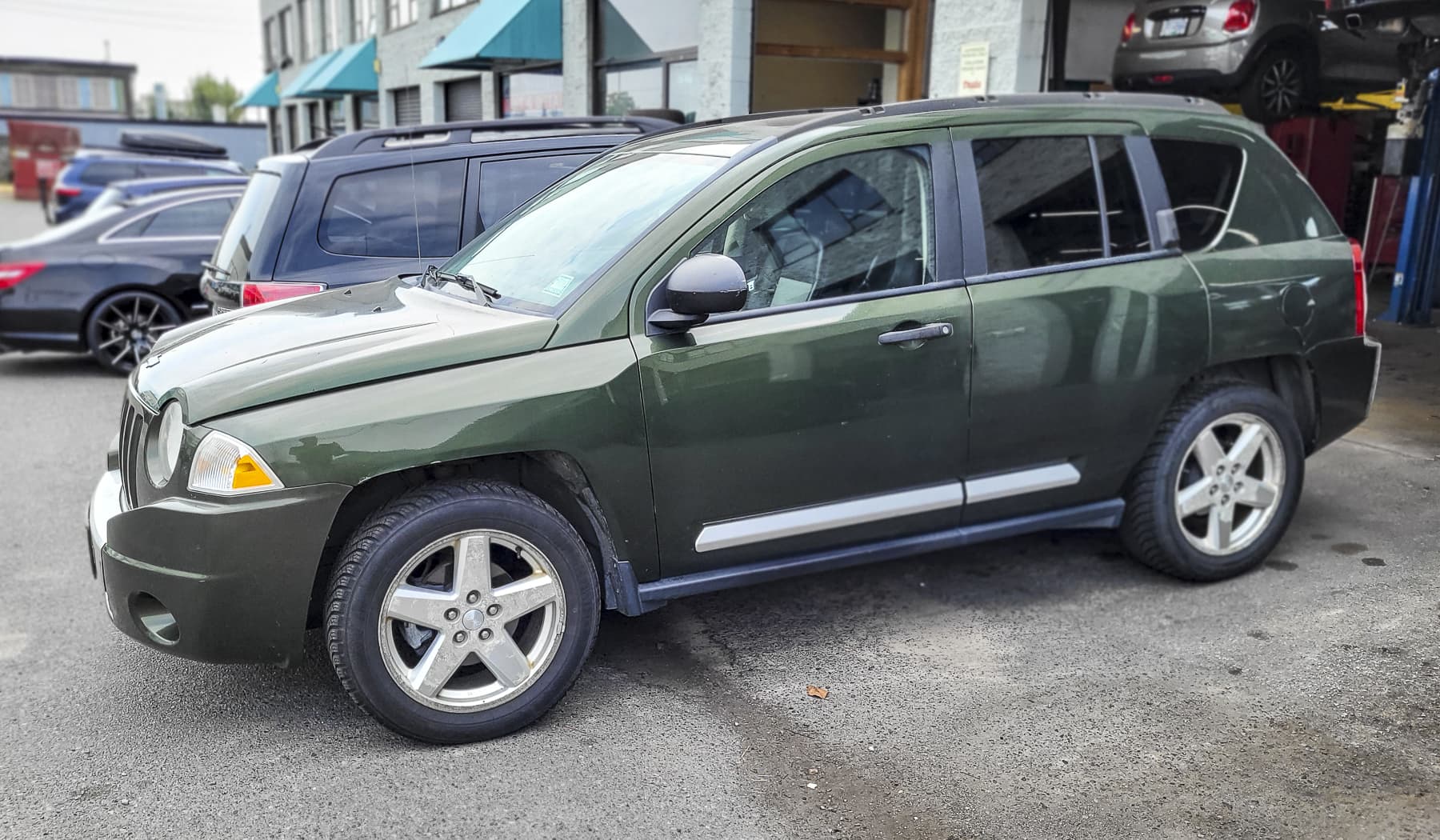 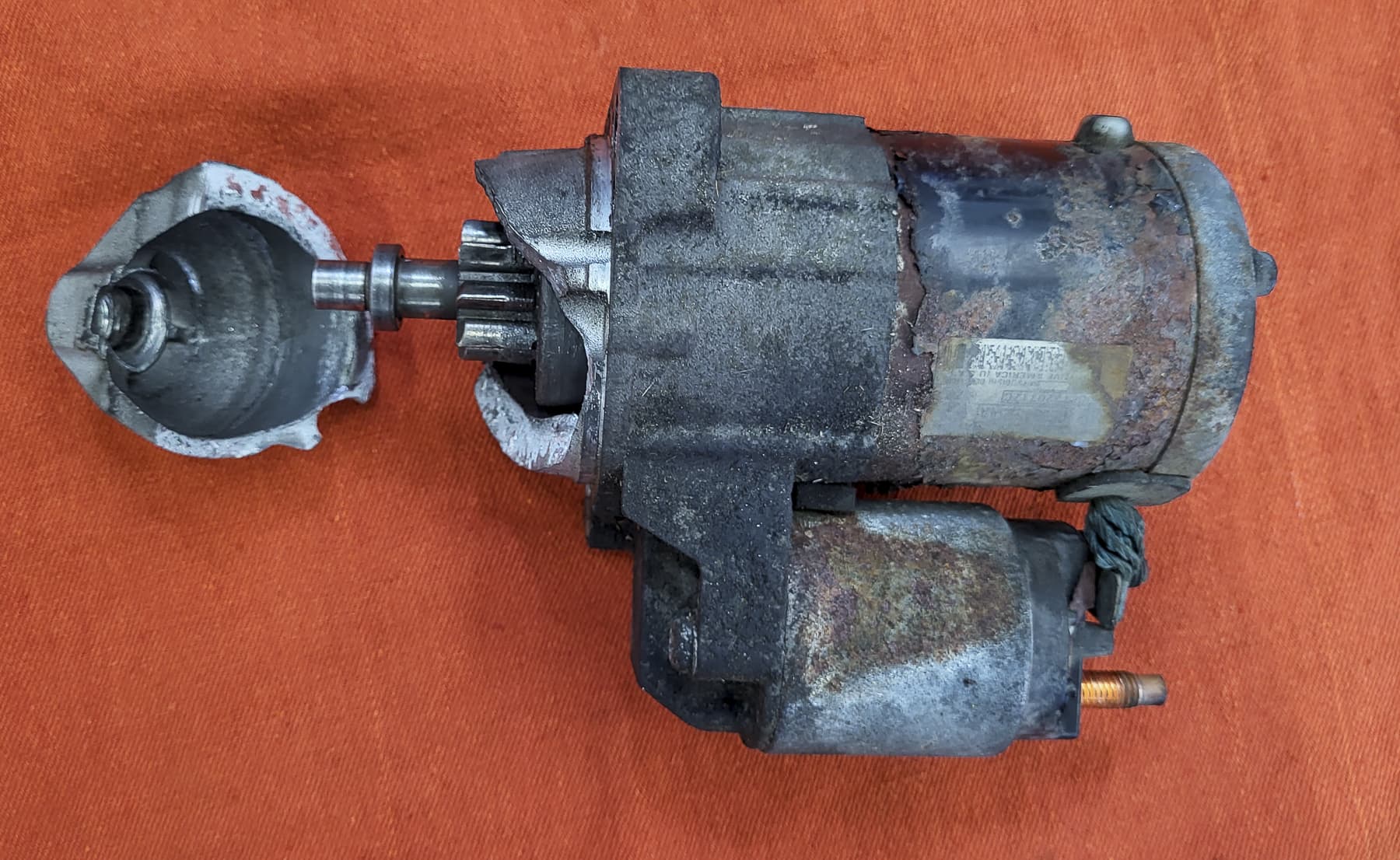 The way the starters designed it just, the gear just engages and doesn't have that bearing or bushing at the end of it. So I thought, okay, that's kind of normal. I guess the bearing side's worn, there's Hey, wait a minute, it's missing a whole chunk at the starter. So that's basically what we found. So that's what was causing this horrible noise. And of course, as you know, this holds the front end of the starter. So as soon as you turn the key, instead of this gear, this is a little gear here, a starter drive gear, instead of engaging in the ring gear, it just bypasses it and just spins and won't turn the engine. 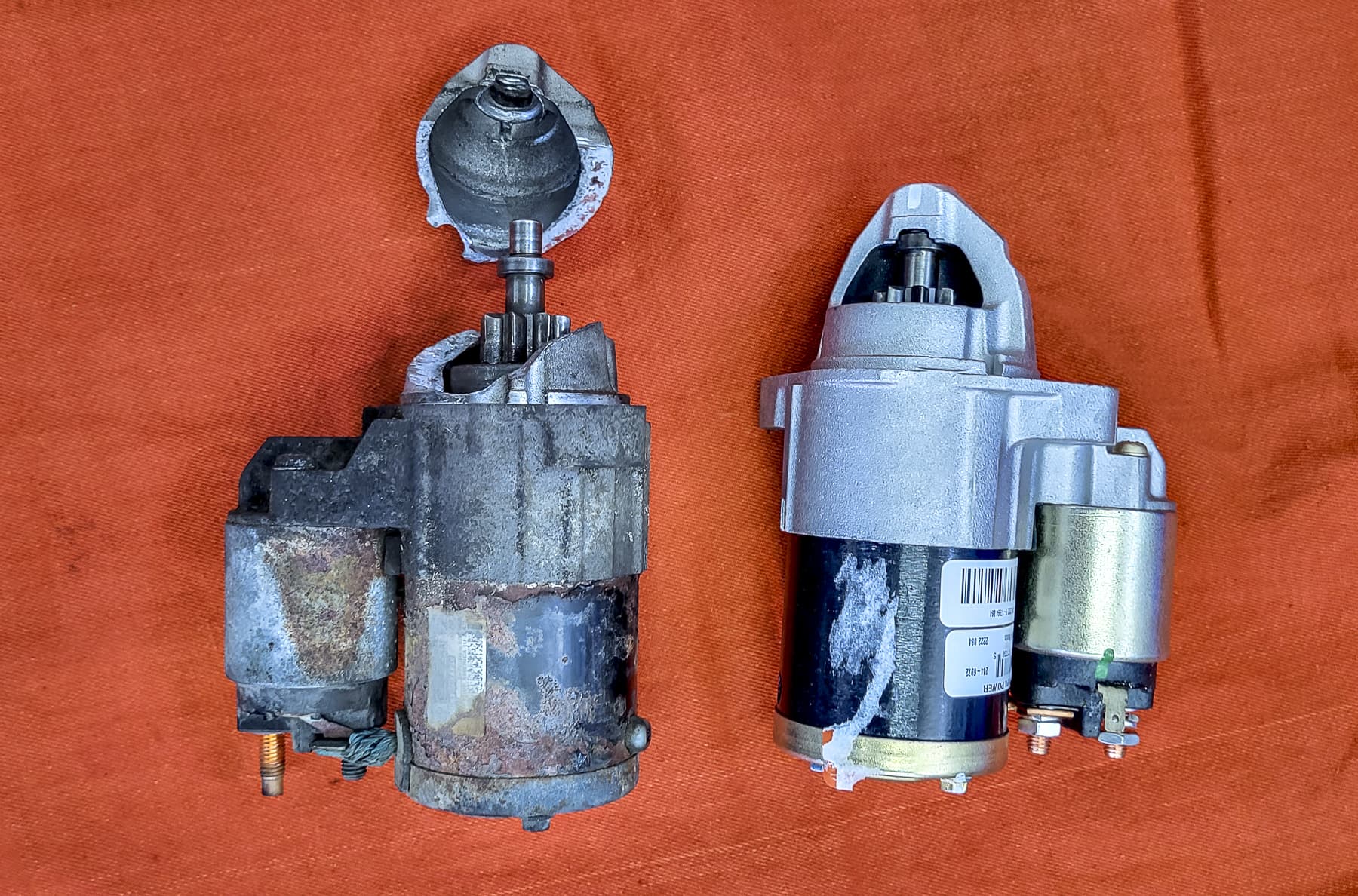 We got one more picture here. Just a comparison that shows the, the new starter with the old. So there's the new one. That's what it looks like when it's all properly put together. So as you can imagine this shaft inside here which rotates, doesn't flop around. You can see the starter is very old based on with all the rust on it.

And you know, the inside, of course, once you run it like this, there's a lot of internal damage that happens to the motor too. So who knows when they go to rebuild it, I mean, the housing needs to be replaced. You might just have to chuck the whole thing in the garbage, which is probably not a big deal, I'm sure it happens more often than not.

Mark: So how about the ring gear? How did that look?

Bernie: Yeah, it was good. So for the ring gear, we basically put a bar on the end of the crank shaft pulley at the front, and just basically slowly rotate it. And in this case, because the way the starters, the ring gear's located, we had to use a mirror and a flashlight to actually look at the ring gear. So we inspected each tooth carefully and there was some normal kind of wear, but nothing abnormal, no reason to replace the ring gear.

Mark: So, what do you suspect caused the starter housing to break in that way?

Bernie: I'm gonna say probably old age, but you know, in the past, I dunno if you remember, like Chevys from the, I don't even know when they started doing this, but they had this really stupid Chevy V8. They'd bolt starter up vertically with two bolts and I can't quite remember why the design is like this, but sometimes you'd have to put a shim in it, because the way it's designed, it would bolt in and the gear wouldn't engage properly. It would make some weird sounds when you crank the engine over.

And so you'd have to either shim it down, or sometimes even grind. It was really one those annoying things about Chevys that just long since history, but anyways, those ones if you didn't have it quite shimmed, right. Or if the engine would backfire, sometimes it would just snap the front of the housing off.

So, you know, it's possible the engine could have had a backfire while it cranked over, but I mean, this engine ran perfectly well. So I don't know. I think in some way it could have just been old age and maybe the bushing or bearing started seizing up and put some stress on it and eventually weaken the metal. It's kind of hard to say. I mean, the bushing is gone. So who knows what had actually happened. It may have been badly worn and then caused the shaft to just torque out and bust. It's something I haven't seen in a long time. So it kind of, you know, go why are we doing an 07 Jeep Compass, because it's kind of old at this point in time, but this is a technology that's been used in newer Jeeps too.

Mark: So how big of a job was it to replace the starter?

Bernie: It's buried underneath the intake manifold, and you have to take the throttle body out and the battery, in the air cleaner box, and it's not hugely time consuming, but it is a bit of a pain to, you know shoehorn it in and out. There's not a lot of extra room. Not the easiest starter, but certainly not the worst I've ever done.

Mark: It's not like the old days when you could climb in the engine bay and pull the starter out.

Bernie: Yeah, exactly. Or actually, if you have a, speaking of Chevys, I mean, if you had an older Chevy pickup truck, you just kind of crawl underneath it, unbolt the starter. And away you go. Put the new one in, or you know, Ford or Dodge for that matter, they were a lot easier, but they're under there somewhere. It's amazing how some of them, I think like certain Cadillacs, they put the starter under the intake manifold. Actually Porsche Cayennes, a lot of them, the starter is actually under the intake manifolds. You have to take the intake manifold off. And I like to think of those things as good space utilization, but I mean, it is really good space utilization. It's just that when it comes to repairing it, you sure pay a lot more.

Mark: So did you use an aftermarket starter or did you get one from Jeep?

Bernie: Oh, yeah, we always use aftermarket. We use a lot of Napa parts in our shop. I mean, for certain applications, they have good warranties, they back us up well, and the quality is generally very good. We almost never get a comeback with them. So that's always a good thing for us, but you know, everything we do is two year, 40,000 kilometre warranty and they all cover that pretty nicely. So yeah, they're good units.

Mark: So I assume once the starters replaced everything, the vehicle started properly.

Bernie: Started fine. Few other issues that the vehicle had, but that's beyond the scope of this podcast.

Mark: And how are Jeep Compasses for reliability?

Bernie: You know, surprisingly these little Jeeps are actually not that bad. My daughter has a Jeep Patriot that she bought. It was like a 2010. It's a similar kind of drive train. I'm actually surprised at how good these are, for what I consider to be kind of a, I don't wanna insult anyone, but I'd say cheap, crappy vehicle. They're actually, they're well, I just, just, this is just a judgment I have, but they're actually really good. Like my daughter's got like 200 something thousand kilometres, there's not even an oil leak coming out of it. So, you know, to me, that's a sign of a well built engine you know, equivalent to Toyotas. I mean, I see Toyota Corollas with 250,000 kms that don't have a drip of oil. You know, that's pretty miraculous considering how cars used to be where any engine would have leaks.

And I mean, even a new BMW, I mean, you're lucky not to have an oil leak by a hundred thousand kilometres. So, I mean, that's a pretty good accomplishment for, that's kind of my judgmental comparison. You yet, you buy this fancy German car and you've got like oil leaks and you buy a cheaper American made vehicle with a, you know, not so sophisticated and there's no oil leaking. So, you know, in a way I think they're actually fairly well built vehicles and pretty reliable. You know, for used vehicle, it could be a good buy.

Mark: If you have a Jeep in Vancouver, and you need some service, you need some repairs. The guys to see are Pawlik Automotive. You can reach them on their website, pawlikautomotive.com. You can also book from there and they'll get a hold of you and find out what's going on and get ready for your appointment. Or you can just call them (604) 327-7112 to book. You have to book ahead. They're busy. They're always busy. Check it out. Pawlikautomotive.com. Or you can check on our YouTube channel, Pawlik Auto Repair, over a thousand videos on there. All makes models, types of repairs. 10 years of doing this. Thanks Bernie.