Mark: Hi, it's Mark from Top Local. We're here with Bernie Pawlik, Pawlik Automotive in Vancouver, 21 time winners of best auto repair in Vancouver, and of course, generally acknowledged by us at least, Vancouver's best auto service experience. And we're talking Jeeps. How are you doing Bernie?

Mark: 2007 Jeep Cherokee, Grand Cherokee, a three litre diesel. Our favourite, there was a fuel tank problem. What was going on with the Jeep?

Bernie: Yeah, so this vehicle came to our shop. It had some fuel leak issues. The first thing we noted coming out from under the hood, there was some pretty bad fuel injector leaks, to the point, where we basically need to replace all six fuel injectors. So they're physically leaking. They're also leaking combustion gas out of the engine. So it was our first repair. And that's a pretty major repair on one of these vehicles. So we replaced all the fuel injectors, cleaned off the engine, cleaned underneath the vehicle, road, tested it, and then we've also found that the gas tank was leaking, which was a bit of a surprise, first time we'd seen something like that on one of these vehicles.

Bernie: No, they're not. So the interesting thing is on the diesel version of the Grand Cherokee, the gas, the fuel tank is metal and the other versions, the gasoline powered, they're a plastic tank. This is a difficult tank to find too, by the way, because it's a kind of a rare model, a sort of a half Mercedes, half Jeep kind of combination.

So the tank was a little interesting to source. But yeah, not a common issue, but I can see why, how, you know, based on this issue with what we found with this vehicle. And as you'll see with some further pictures and as we discuss it, how this, you know, could unfold on a lot more vehicles going forward.

Mark: So you talked about it's hard to find, were there not just not a lot of repair replacement options available?

Bernie: No, like the dealer, so from Chrysler, the tank had been discontinued and that, that's an only, it's not a Mercedes tank that fits in a Chrysler, it's actually available for Chrysler, you know, a Jeep tank. So that was no longer available. And also if it was, it was insanely expensive. There's a good aftermarket company in Canada and the US, that makes fuel tanks for pretty much anything, but they didn't make one for this vehicle either. Nothing used is available.

So we did actually have a supplier who managed to source of brand new one for us. It wasn't really cheap, but you know, much cheaper than the dealer's price so. We did get one, brand new, took a week to get it, but he had it, it's in and it works great.

Mark: So what was the problem? Why was the fuel tank leaking?

Bernie: Rusted out, and this is where we can have a look at some pictures. Yeah. So being metal, you know, any metal tank is prone to rusting over time. So some fuel tanks will actually rust from the inside out if you get moisture inside. 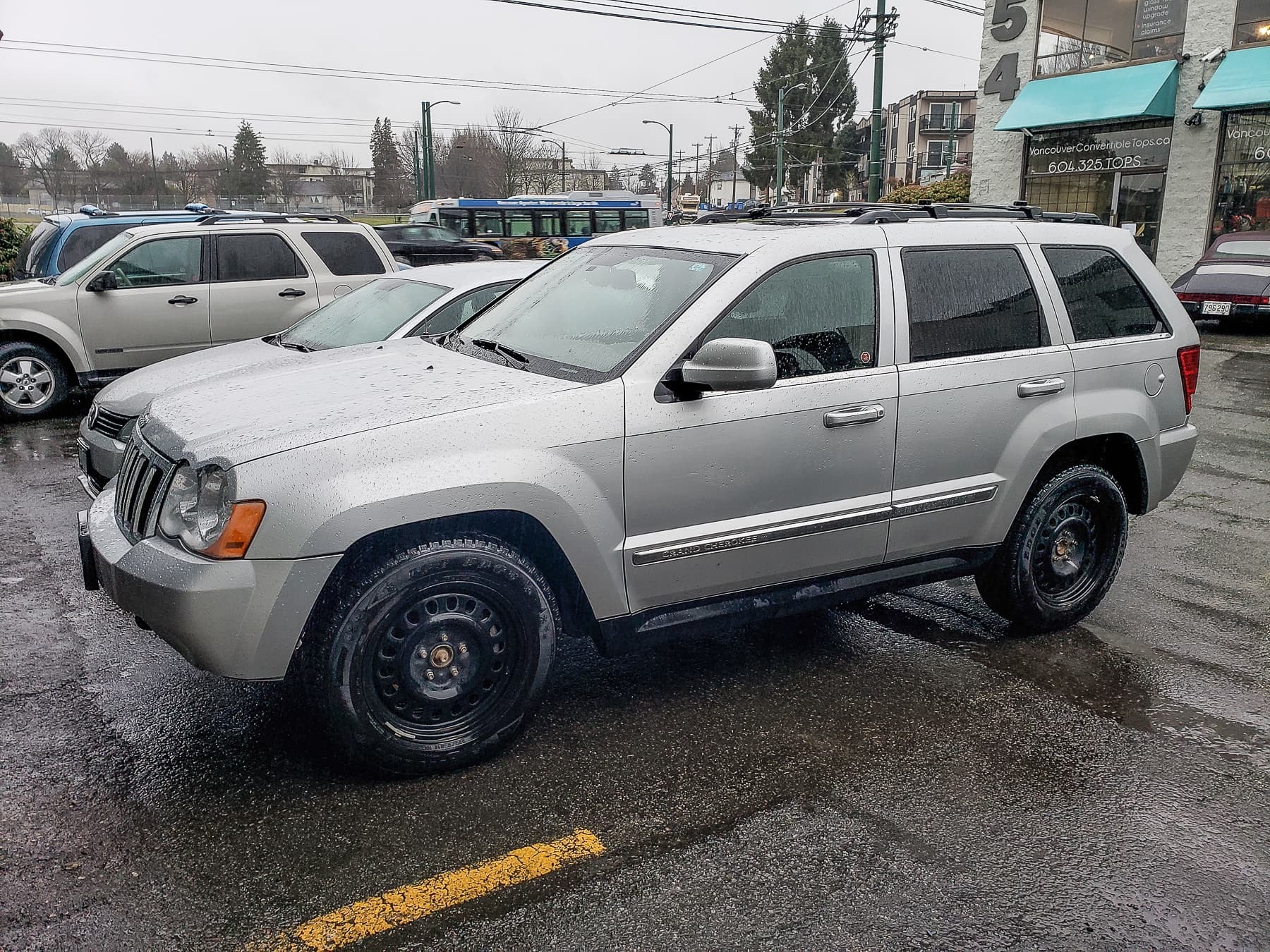 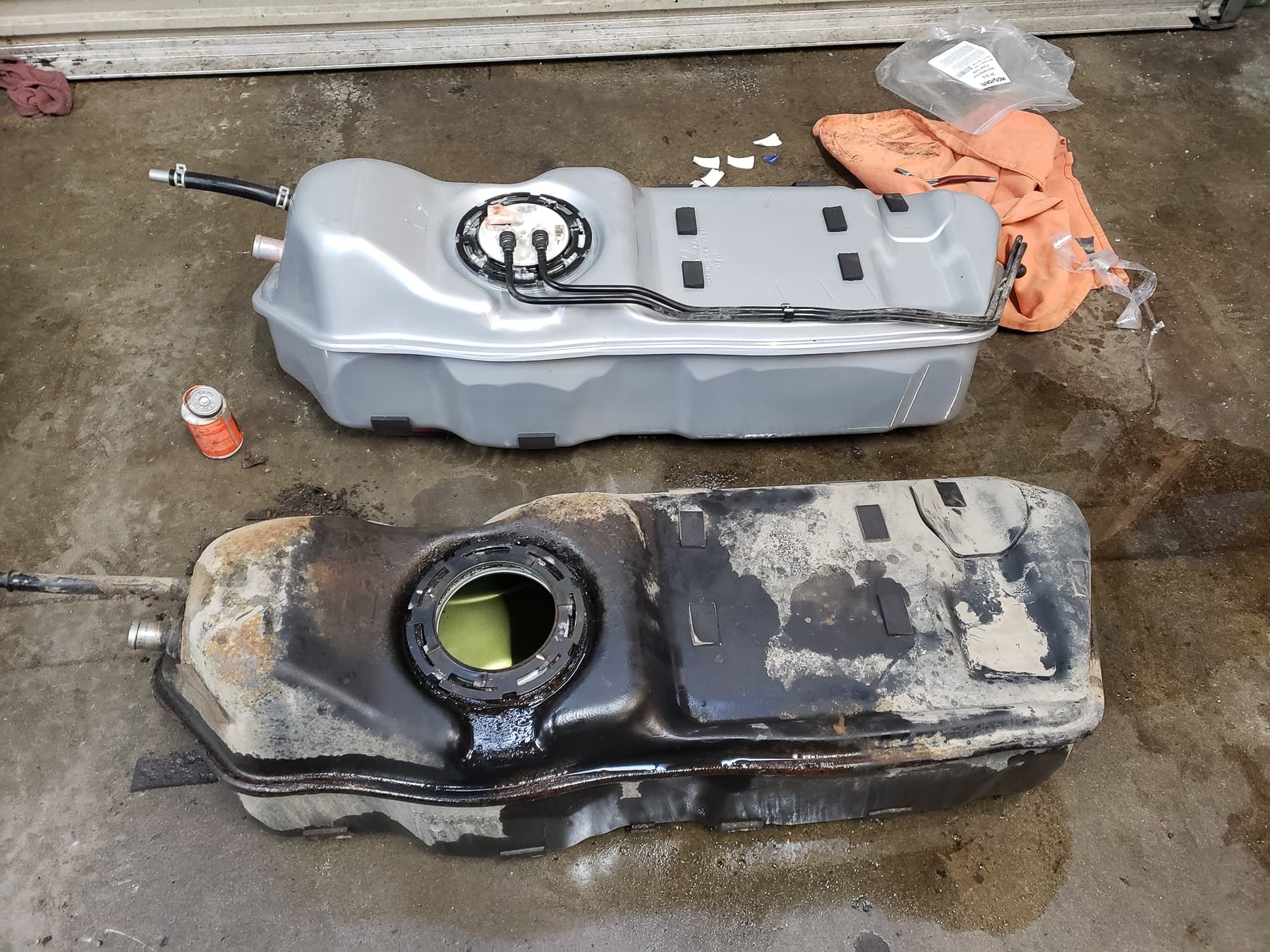 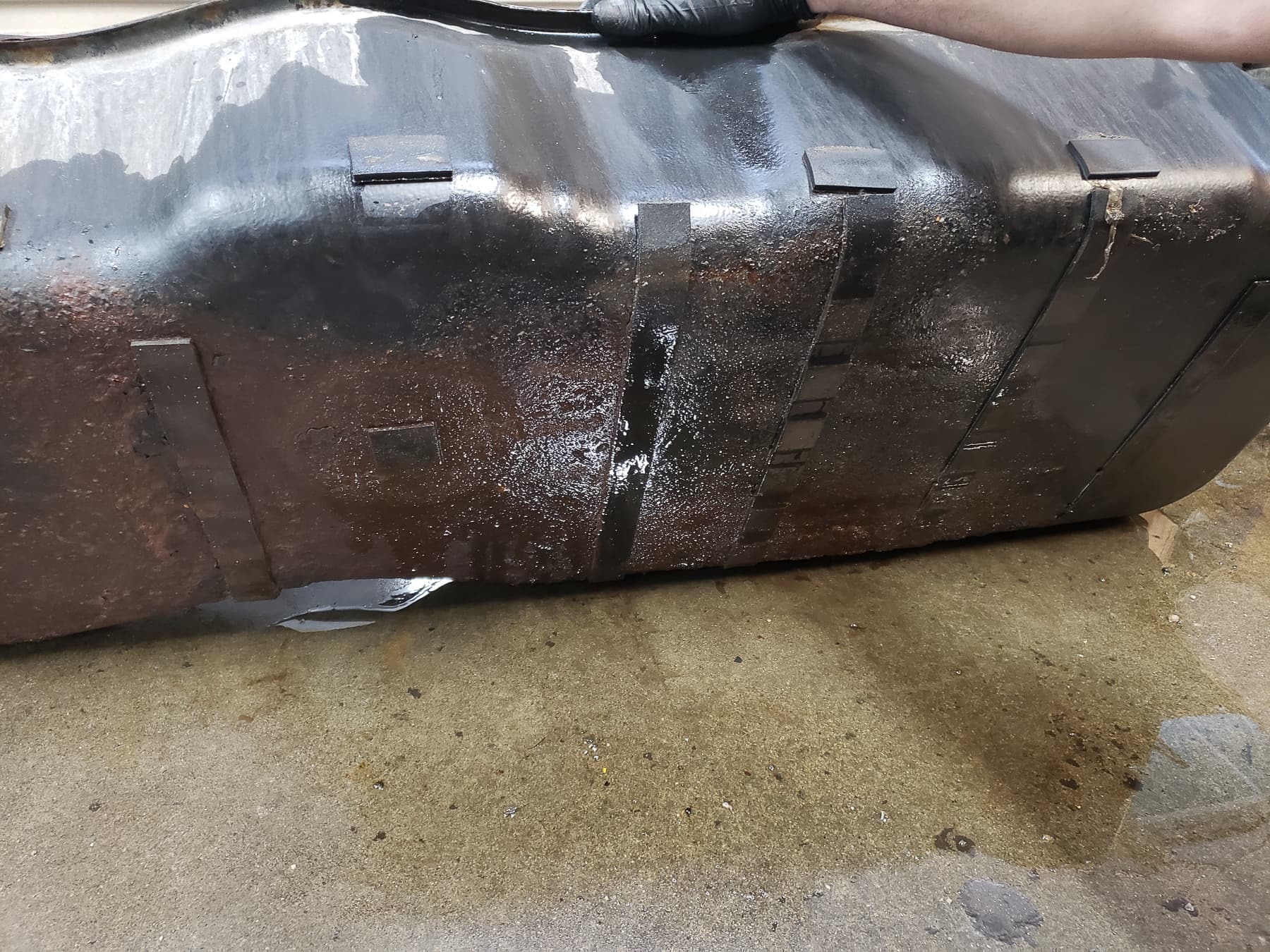 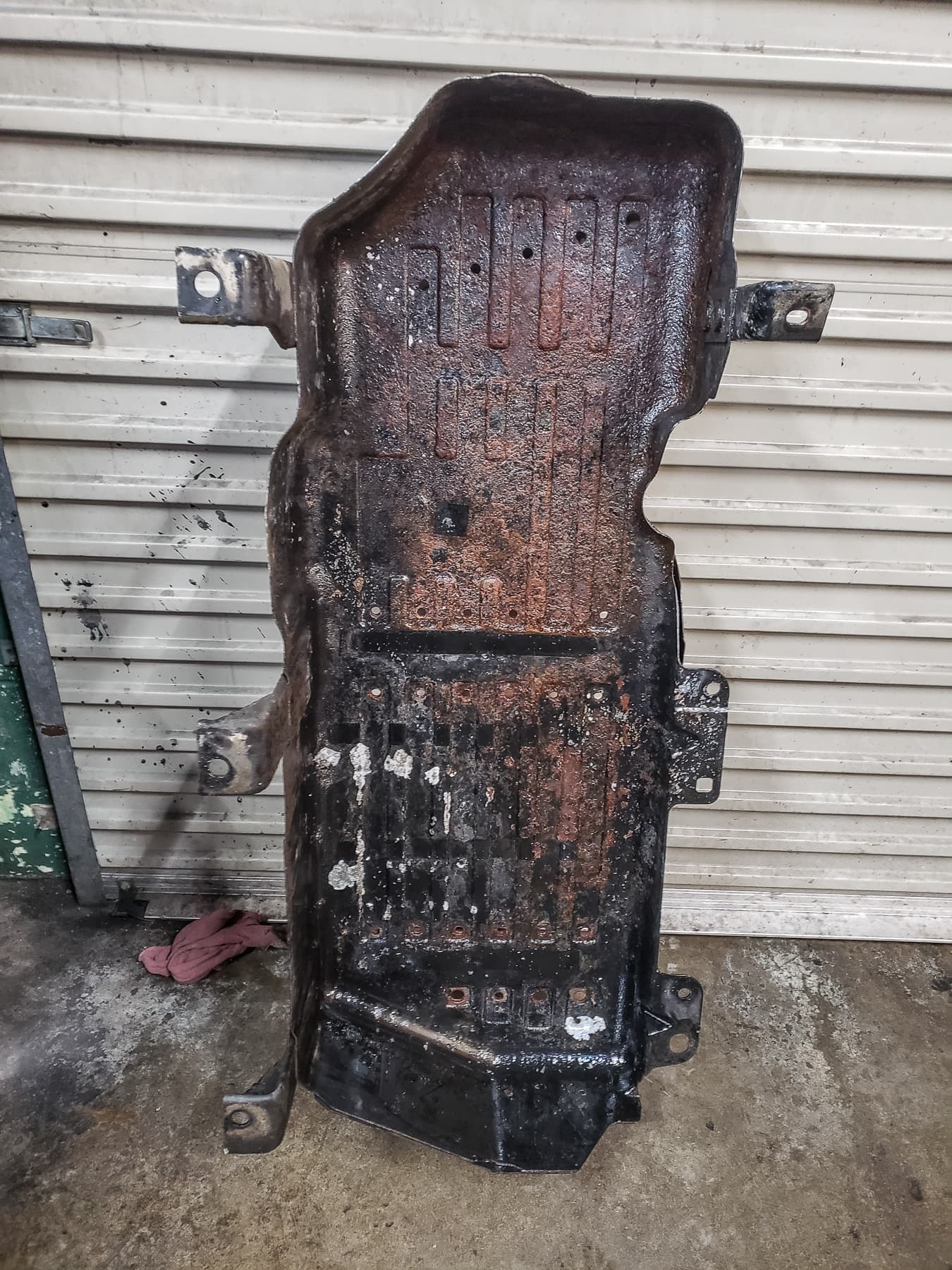 Anyways here's our Jeep, 2007 Jeep Grand Cherokee. Equipped with snow tires and it's a rainy Vancouver day. You can see all the rain all over it. The weather has been very gloomy lately. Snow for a while, and then rain and a lot of precipitation.

Anyways, here's a view of our tanks. Here's our brand new tank. Here's our old tank you know, you can see a lot of fuel it's leaked around it, but we'll look into things a little further. Of course, we transfer the fuel sending unit and fuel lines over to the one tank to the other and whatever hoses and pipes we need to. Leak. There's the bottom of the fuel tank. You can see it's just very rusty and there's some, basically some foam straps here that keep the tank separated from the crossmember, or the a tank mount unit. I call it a tank mount unit. It's basically the fuel tank sits in this, this very sturdy steel structure here. This is actually excellent protection from rocks and underneath hazards. So if you're going off road one, these vehicles, you can be pretty sure your tanks pretty well protected. This piece weighs a lot.  I actually photographed it up against the wall or the door in our shop, but I just moving it was incredibly heavy, but you can see a lot of rust here. So what's happened over time is that, you know obviously the vehicle has been driven on roads with a lot of road salt, you know, and maybe dirt and things accumulate. Dirt accumulates in here and moisture stays trapped. And that, between that and the bottom of the fuel tank, it basically just rusts out the fuel tank. So that's the whole story there. Good shield but unfortunately, kind of keeps a dirt trapped in as well. And that can cause rust.

Mark: So is there anything that a Grand Cherokee owner, diesel owner especially, can do to prevent this from happening?

Bernie: Well, you could certainly get in underneath the vehicle and you could flush out the gas like that, I called a splash pan, that whole fuel tank area, and really try to get a hose in and wash out that area after every winter season would be a good idea. Or even if you're going off road and you go on some muddy roads, it would be a good idea every once in a while to flush that out.

However, you know this vehicle is now 2007 that's 12 years old. Will it matter at this point in time doing that kind of thing because a lot of the damage may already be be done. Now that being said, you know, we work on a lot of these vehicles. This is the first fuel tank we've seen. But certainly if you're into preventative maintenance this is a good idea. And I mean on any vehicle, and if you own a newer Jeep, you know, don't wait for this to happen. 5-10 years down the road, if you keep the vehicle a long time. Just get underneath there every once in a while or take it somewhere and get it hosed out properly. It's good to get into all the cracks of the wheel wells, under any plastic coverings. These things trap dirt. And when dirt trapped and moisture is trapped, that starts to rust the body of the vehicle as well. So those are kind of good preventative maintenance, so you can do in your vehicle, not just by just changing oils and fluids, but actual cleaning things. It'll keep it going a lot longer.

Mark: And is this a problem with the gas engines or is the plastic tank just more durable?

Bernie: Yeah, good question.  I mean, plastic tanks just don't rust. So that's a great thing about them. They're not really as tough a is a metal tank in some respects, but they are I mean, I actually prefer plastic tanks because they don't rust. You just never get an issue of rust. The other thing, you know, of course with metal tanks, you know, they often get rust from the inside as well. If moisture gets you know, often moisture will get into a tank somehow and over, especially over a number of years, and sometimes fuel tanks will rust from the inside out as well.

So the thing of the plastic tank, that never happens.

Mark: And how was the Jeep after everything was repaired?

Bernie: No drips, no leaks, ran great. So yeah, it's good.

Mark: Another happy customer. So if you're looking for a service on your Jeep Grand Cherokee or Jeep in Vancouver, you can call Pawlik Automotive in Vancouver, British Columbia, Canada, (604) 327-7112 to book your appointment. You have to call and book ahead. They're always busy. Or check out the website, pawlikautomotive.com. The YouTube channel of course, has hundreds of videos on there on all makes and models of cars and repairs, types of repairs, reviews of different vehicles and how reliable they are. That's under Pawlik Auto Repair. You can find that. And of course, we really appreciate you listening and enjoying and rating our podcast. Thank you so much for doing that and thank you, Bernie.