Mark: Hi, it's Mark from TLR. I'm here with Bernie Pawlik, Pawlik Automotive in Vancouver. Vancouver's best auto service experience. 25 time winners of best auto repair in Vancouver as voted by their, 25 times. Holy crap. They must be good. Bernie we're talking cars. How are you doing?

Bernie: We are, I got to make a slight correction though,  it's only 24 of this time, Mark. And you're anticipating just a little further ahead, but it's hard to keep track these days. Anyways, thank you for the intro. I'm doing awesome.

Mark: So today's victim is a 2007 Mazda CX9. What was going on with this vehicle?

Bernie: Yeah, so this vehicle came to us actually quite a few months ago with an engine misfiring problem, it was running very rough. So that was a client's concern and all of a sudden started running rough.

Mark: So you did some diagnosis. What did you find?

Bernie: So we found there was an ignition misfire. The spark plugs were old and also there's codes for multiple it's cylinder misfire. So there's several cylinders, misfiring. Tested, found at least one ignition coil bad. They're all same age. So we figured the first step in the repair was to replace the spark plugs and the ignition coils which we proceeded to do.

Mark: So you replaced that stuff. How did the vehicle run after that?

Bernie: Well, it ran better, but still not perfect. There's still a misfire in cylinder number five. And so we had to proceed with some further testing.

Mark: So what'd you end up doing next?

Bernie: So the next testing of course, is to verify that the coil wasn't faulty or the spark plug, we did test that found that was good. We then next proceeded to test the wiring and the wiring was good. So from there, the only thing left is the PCM the powertrain control module, which is the unit that actually fires the signal. It basically drives the primary side of the ignition coil. That was at fault. So replacing the PCM was the next step in the game.

Mark: Are there different replacement options for PCMs? That's a computer module, basically.

Bernie: It's a computer module, yeah. Powertrain control module. So it controls the way the transmission shifts. It controls the engine. It takes the input from the various sensors in the engine, air flow, engine temperature in a number of different items. And then it'll trigger the spark plugs. The ignition coils to fire the spark at exactly the right time. It'll trigger the fuel injectors to fire the fuel injection at the right time. And a number of other things. Plus transmission shift points and all sorts of things. It handles it all in one nice little box, which we'll look at in a minute.

Anyways as far as options. I mean, there's used parts available. There are brand new, and then usually the dealer is the place to go. There are aftermarket sources as well, so we looked through a variety of different sources. And there was nothing available used as far as new from the dealer, it was obsolete.

We deal with a company that rebuilds PCM, so we sent it off to them to have it done. And while we're talking about that, I'll just share some pictures. 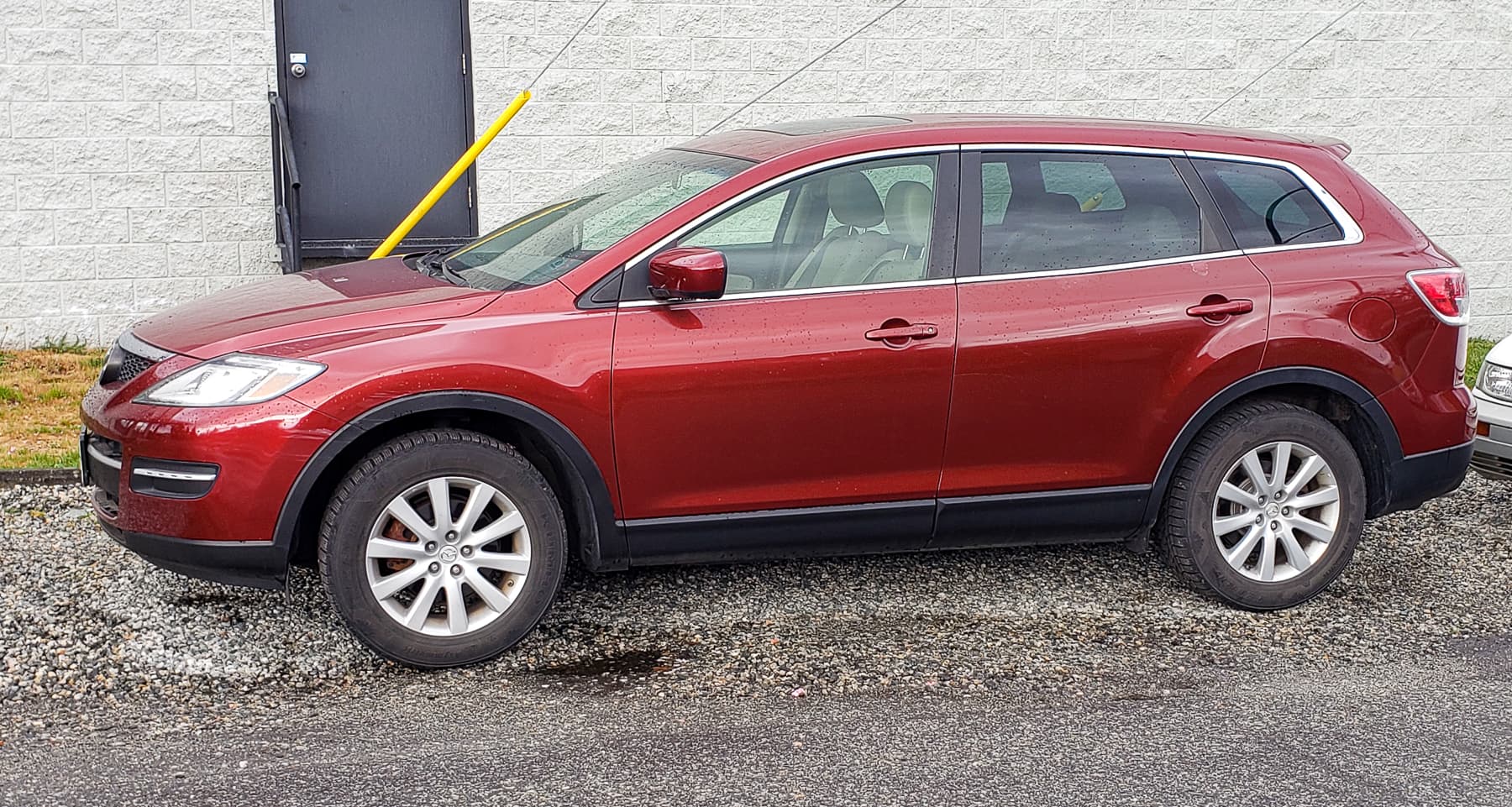 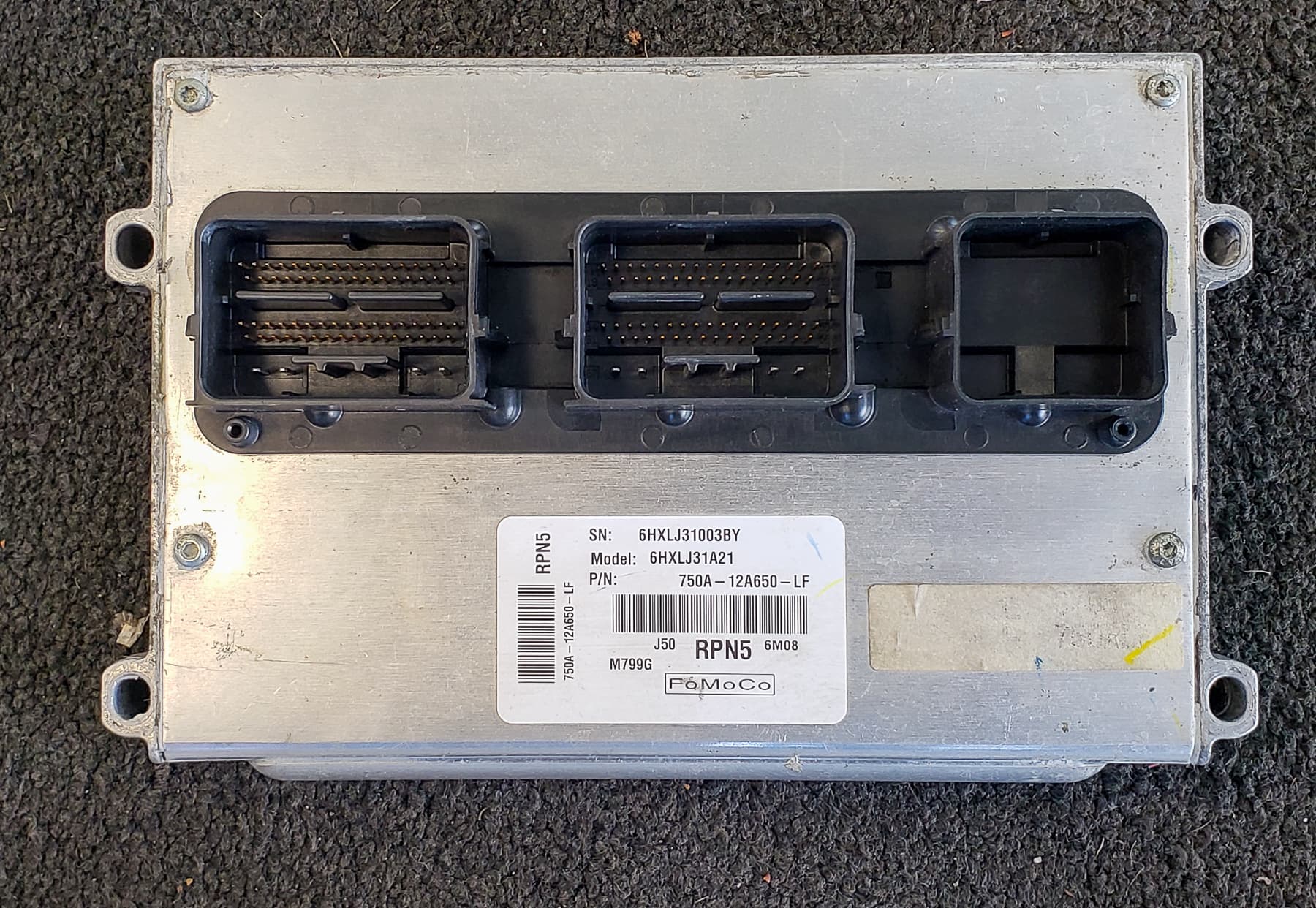 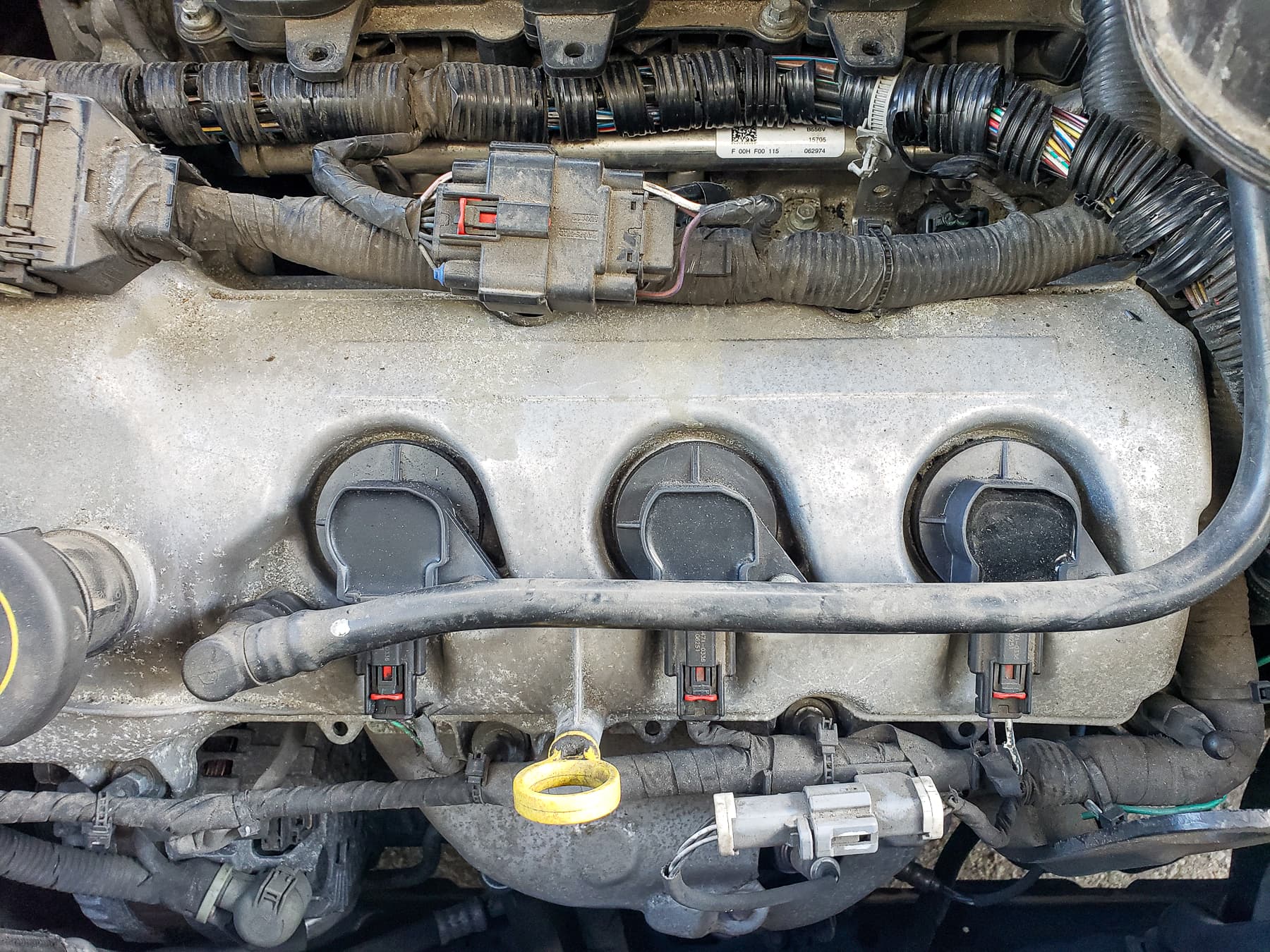 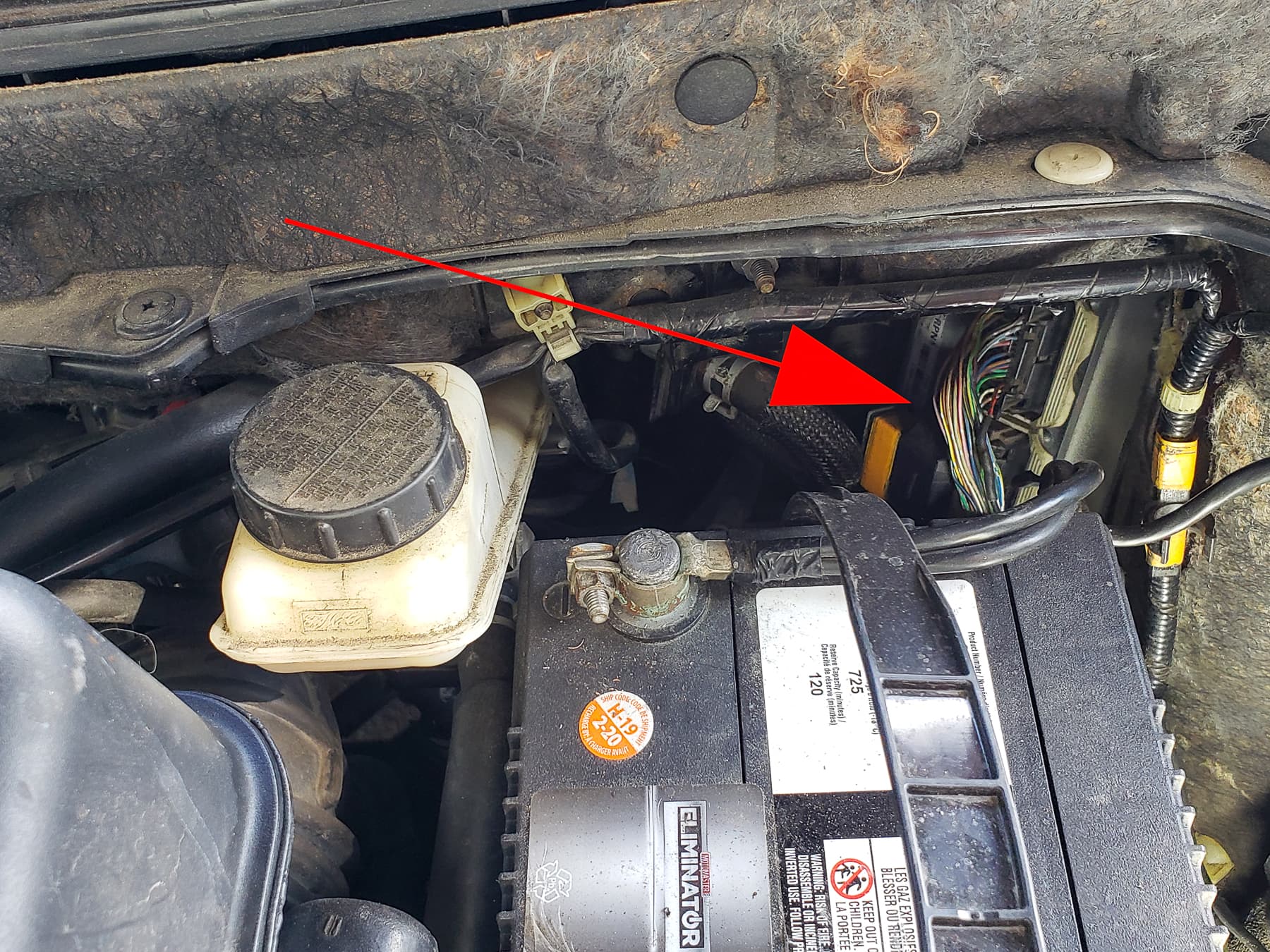 We were able to find PCMs with this exact number it's important to get the same number. It had a different number here. I think it was a JF or a KF, something different. In I'm saying desperation, you'll know why I say desperation in a few moments. We actually did find one with a slightly different number and tried it and the engine would run, but eventually the check engine light came on because the emissions specifications for this vehicle are for California and the Canadian model PCMs just wouldn't cut it. So it ran fine, but you'd forever have a check engine light on.

Next pictures. This is a view of the front valve cover of the engine. These are the three ignition coils for the front three cylinders. The other three coils are at the back of the engine on the back bank. It's a lot of work to get them because you have to remove the intake manifold. So this is why we often, when one coil goes bad, replace them all, especially if it's on the rear bank because you know, if you have to change one, that's the same amount of labor to change all three as it is to do one. And then you don't come back in a couple months when the next coil dies to replace that.

The location of the PCM, which if you're looking under the hood, you have the battery, the PCMs buried away in the back the engine compartment, really not that difficult to get out, but the battery has to come out in a few things, need to be removed to get at it. So there's our pictures.

Mark: So you had to get it reprogrammed and that took quite a while?

Bernie: Yeah. Okay. So we sent the PCM off to our rebuilder. We've had a lot of stuff done by them. They do a great job. We got the PCM back, plugged it in, you know, going great. It's going to be done. And it ran worse because two cylinders were now misfiring. Called them up, they said send it back. So he sent it back. Actually the other thing is it took over a month to get the PCM rebuilt because they were having trouble finding the components in the unit that were faulty.

It seemed to be a shortage of them. We're now, you know, few months later, there's a big talk of shortage of computer chips out there affecting manufacturing. But I don't know if this is a start of that or whatever the case.

Send the PCM back. They rebuilt. It said, yeah, it works fine. Now send it back to us. Same thing. So obviously that wasn't any good. This is when we tried the used one, which didn't work out. So we dug a little further with the people who did the PCM rebuild said, look, we can get you a brand new one. We'll credit you the price of what the rebuilding costs, which was actually very reasonable.

And we got a new one which actually took about two more months. So we're into this vehicle now for about six months and partway through the process, the owners decided, you know what, we don't really need this car. It's our second car. Do you want to just take it off our hands? And I said, yeah, sure. No problem. So we nixed the bill and I now own a CX9. So if you haven't watched this podcast, I have a nice CX9 for sale. Anyways, so we finally got the new PCM and plugged it in.

Mark: Okay, so, and what happened? Did it start?

Bernie: Oh yeah, so it still doesn't start. And this is no problem because what happens is it needs to be reprogrammed to the keys. Being Mazda is kind of a Ford sort of product, if you looked on that module, I showed it. FOMO Co on it. They use a system it's called PATS, it's passive antitheft system and the keys need to be reprogrammed. So we have to use a computer, download the files. It's a programming system and reprogram the keys to the vehicle, reprogram the computer and started up and it ran absolutely beautiful.

So yeah, so that's the end of the story. Pretty much the end of the story, but well, what I can say that we found out along the line of you're watching this podcast is PCM failure on these vehicles is very common. This is the first one we've actually run into. There's not a ton of these cars on the road. So we don't see a huge amount of them, but this is the first one we've seen that fails. And it's quite honestly a bit of a pain. Like it surprised me. I don't think I've ever had a, what I would call a regular vehicle being out of service for six months waiting for a part. If we have to do this all over again, and another vehicle came in, I know exactly where I'd order it from straight away.

And chances are, if, as a Canadian car we'd be able to get a used one pretty fast, but how reliable is it used one on a car that fails a lot. These are things we always weigh out and we do a repair on a car. Anyways, make a long story short. This is vehicles fixed. It runs great. And it's a happy ending to a very long repair process.

Mark: So all trying to sell the vehicle aside, besides PCM problems, how our Mazda CX9's for reliability?

Bernie: Yeah. They're good vehicles. I mean, it's a nice size vehicle. A lot of them are very well equipped.  They're nice to drive, very car-like driving for small SUV. I think they're great. And we've serviced this vehicle for this person for many years. It's been a reliable car besides doing some brake work and fluid maintenances. It's actually been a very reliable vehicle. So this is one little bit of a flaw I'd say in the vehicle, but I feel confident whoever's going to buy this vehicle will not have to worry about the PCM and ignition coils because it's all brand new.

Mark: It's good for another 14 years.

Bernie: Exactly, precisely. So there we go.

Mark: If you need some service for your Mazda in Vancouver, the guys to call are Pawlik Automotive. You can book online at pawlikautomotive.com or give them a call (604) 327-7112. You got to call and book ahead. You have to book ahead. They're busy. Check out the website of course, pawlikautomotive.com, hundreds of videos, no exaggeration, all makes and models and types of repairs. We've been doing this for nine years now, or YouTube channel is under Pawlik Auto Repair, same thing. It's all there, all the expertise of nine years of repairing all kinds of vehicles. And of course, thanks so much for watching and listening. We really appreciate it. Thanks Bernie.