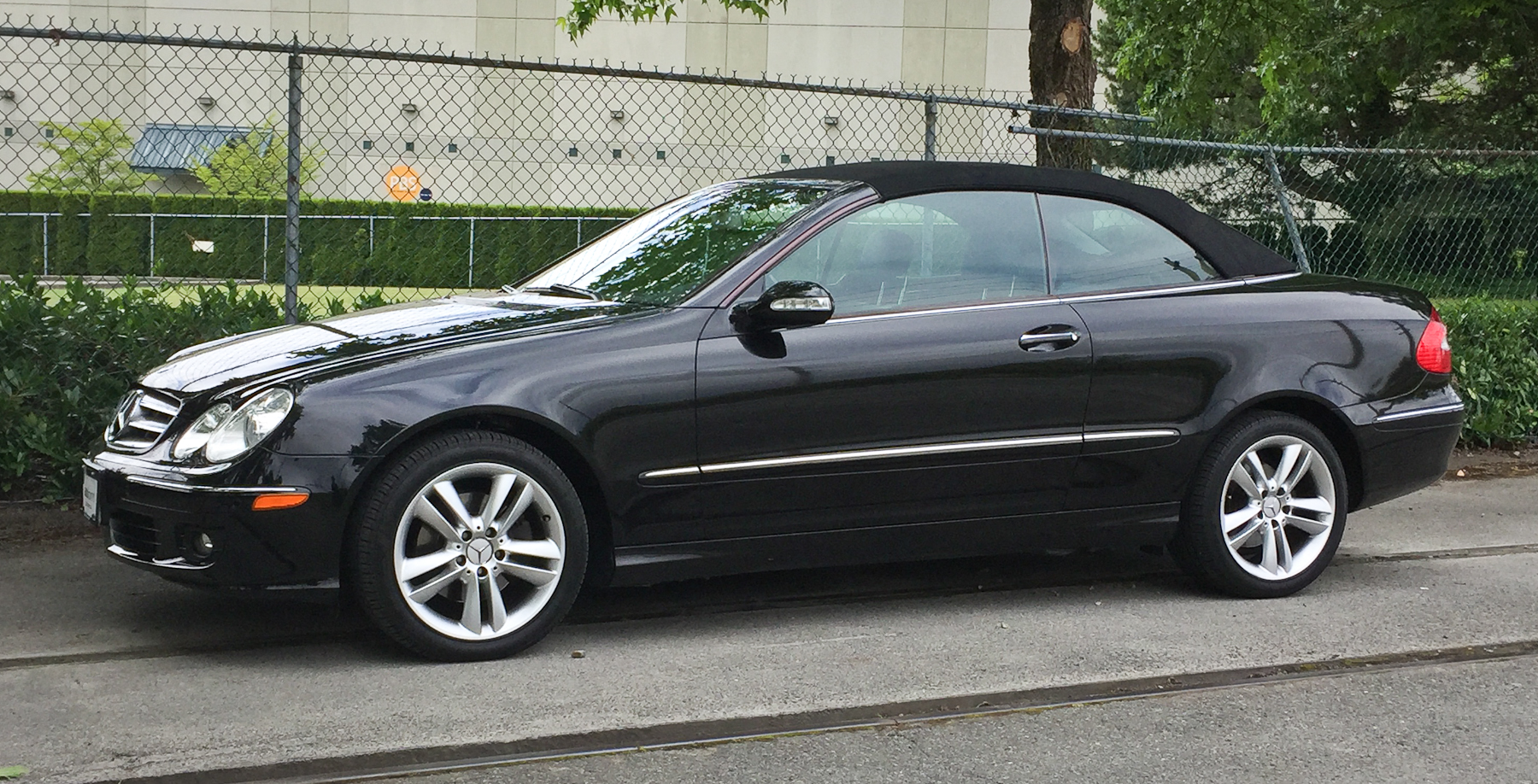 Bernie: Yes, so this is a nice convertible Mercedes and as you mentioned it's 9 years old but really to me it’s not old: it looks like a new car and drives like a new car. This is a very low mileage car. The A Service is basically a Mercedes basic maintenance service and Mercedes has different levels of service but A is basically the starting point.

Mark: OK so how often does an A Service have to be done?

Mark: So what the other service levels, I guess what other maintenance services need to be done on Mercs?

Bernie:  I'II explain an A Service first which is basically an oil change along with a maintenance inspection so with that service we would look at the fluid levels, adjust the tire pressures, check the lights, wiper blades, visual under hood and under car inspection. It’s not generally a wheel off, brake inspection and that’s when we get into the B Service which is a more thorough service and that’s done every second time. As far as other maintenance services for Mercedes there are fluids that need to be changed from time to time and spark plugs of course, not very often though, but the A Service is the most common.

Mark: So what other, is there other additional items that are required in an A Service?

Bernie: Generally not but air filters may need to be replaced, the cabin air filter also is not difficult to inspect so depending on the mileage that may need to be replaced and on Mercedes the brake fluid generally needs to be flushed every two to three years so that’s something we would look at, so those might be additional items but again we evaluate it during the A Service.

Mark: So why would brake fluid need to be flushed?

Bernie: Brake fluid absorbs water out of the air and it’s called a hygroscopic fluid; it will somehow, I don’t know how, it’s kind of magical but water seeps into places like in through plastic parts and metal and hoses and somehow it gets into your brake system. We have a tester where we can test the water content of the brake fluid. European manufacturers they’re really big on flushing brake fluid. I guess the northern European climate where a lot of Mercedes and German vehicles come from, its a rainy type of climate so moisture gets in there. European manufacturers are concerned about that kind of thing where a lot of other manufacturers are not, and they should be. That’s why brake fluid needs to be flushed and the more water that is in the fluid the will lower the boiling point goes and it’s amazing if you ever look at a chart, it’s kind of scary when you get up to 4%, the boiling point drops by 100 degrees Fahrenheit or maybe it’s even 150, it’s quite a lot. If you’re going down a really steep hill and you need to put your brakes on a lot you could actually lose them if there’s too much water in the brake fluid.

Mark: And that is definitely a scary thing if you’ve ever had that happen, it is, you press on the pedal and nothing happens and it is not good.

Bernie: I’ve actually experienced it, I had a Subaru that we got the brakes kind of cooking hot, we didn’t quite lose them but it was hard to stop the car and so it I’ve noticed it but it doesn’t happen too often. I’ve got a couple photos to share of this car if we have a minute here to look.

Bernie: Yeah, o.k. yeah so there’s our Mercedes and there’s a view of the engine compartment, not a lot to see other than those nice plastic covers that hide all the little details but a simple clip and removal and the engine is visible underneath. It’s a V6 in this car; it’s a 3.2 litre V6. You can usually tell what size engine a Mercedes has by the name of the car CLK320, it’s a 3.2 litre engine. So we’ll leave here, we’re back. 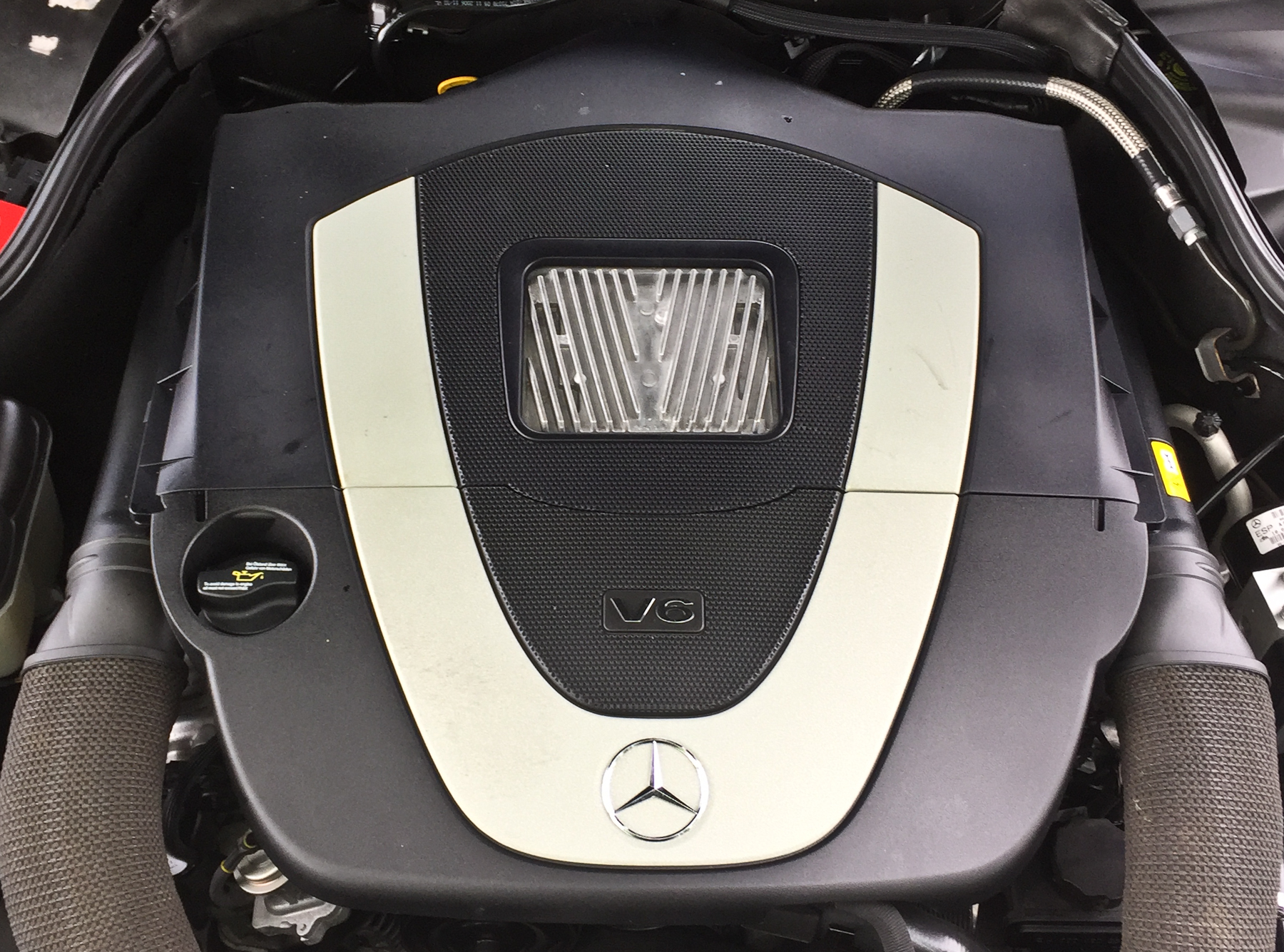 Mark: So as a Mercedes owner, can I count on the dash reminder system?

Bernie: Yes, they’re actually quite reliable. So this is the reminder that comes on and tell you A Service due: visit workshop or B Service, it’s quite reliable and I like it more than some other cars such as BMW’s that have 24,000 kilometer oil change intervals, Mercedes are more like the 15,000 range which I think is really reasonable. They all use the same kind of oil even though BMW specifications is different than Mercedes, they’re all meant for the same specifications but by the time you hit 24,000 kilometers it’s pretty ugly but at 15 your oil still has some life left in it which is what you want. You don’t want to change really old oil, so yeah, you can count on it and the other thing it also has is a timer so if you only drive, 5,000 kilometers a year it’ll remind you after a year or so, maybe a little longer that you should change your oil because it’s getting old. So yeah, I would count on it, it’s good.

Mark: Any final thoughts about Mercedes and servicing?

Bernie: Yes: as a final thought change your oil. We’ve got another Mercedes diesel in our shop where someone has gone 20,000 kilometers beyond the oil change interval, blown their engine and it’s another you know over $20,000 bill, actually this one the turbochargers wiped out too so it’s going to add even more money. Oil changes on Mercedes aren’t cheap but engines are way, way, way more expensive so follow the reminders on your dash, they make it easy.

Mark: So cautionary tale, make sure you follow your reminders on your Mercedes and if you need service for it the guys to call in Vancouver are Pawlik Automotive, you can reach them at 604-327-7112 book your appointments, they’re busy, smoking busy because they’re popular, they do a great job and check out their website pawlikautomotive.com. Thanks Bernie.