Mark: Hi, it's Mark from TLR. I'm here with Bernie Pawlik, Pawlik Automotive in Vancouver. Vancouver's best auto service experience. Multi-time winners of many, many awards over two dozen, not exaggerating as voted by their customers, the best auto repair in Vancouver. And we're talking cars. How are you doing Bernie?

Mark: So today 2007 Nissan Frontier that had an axle problem. What was going on with this vehicle?

Bernie: Yeah, actually, the axle was fine. There was a fluid coming from the right, actually both rear axles seals were leaking fluid.

Mark: So that sounds pretty bad. What kind of damage can a leaking axle seal do?

Bernie: Well in the very most extreme case, you could lose all your gear oil from your rear differential, which would of course cause the differential to seize up and break. But that would take a very long time to happen. The more immediate problem with a leaking axle seal is that it drips oil onto the brakes.

Mark: So what's involved in changing the axle seals?

Bernie: So in this particular vehicle, the axle is removed from the outside, I want to say the outside of the axle. There's a couple of different designs. One of them has a removable cover and you can pull a lock pin out in the axle slides out, change the seal.

On this one, it's a little more complicated. It's easy to remove the axle. There's four bolts, the axle pulls out, often with the brake system. So there's things to detach. That's basically what's involved. You have to take that out first and then the bearing has to be removed to access the axle seal.

Mark: You have pictures?

Bernie: I do. So there's are Nissan Frontier. 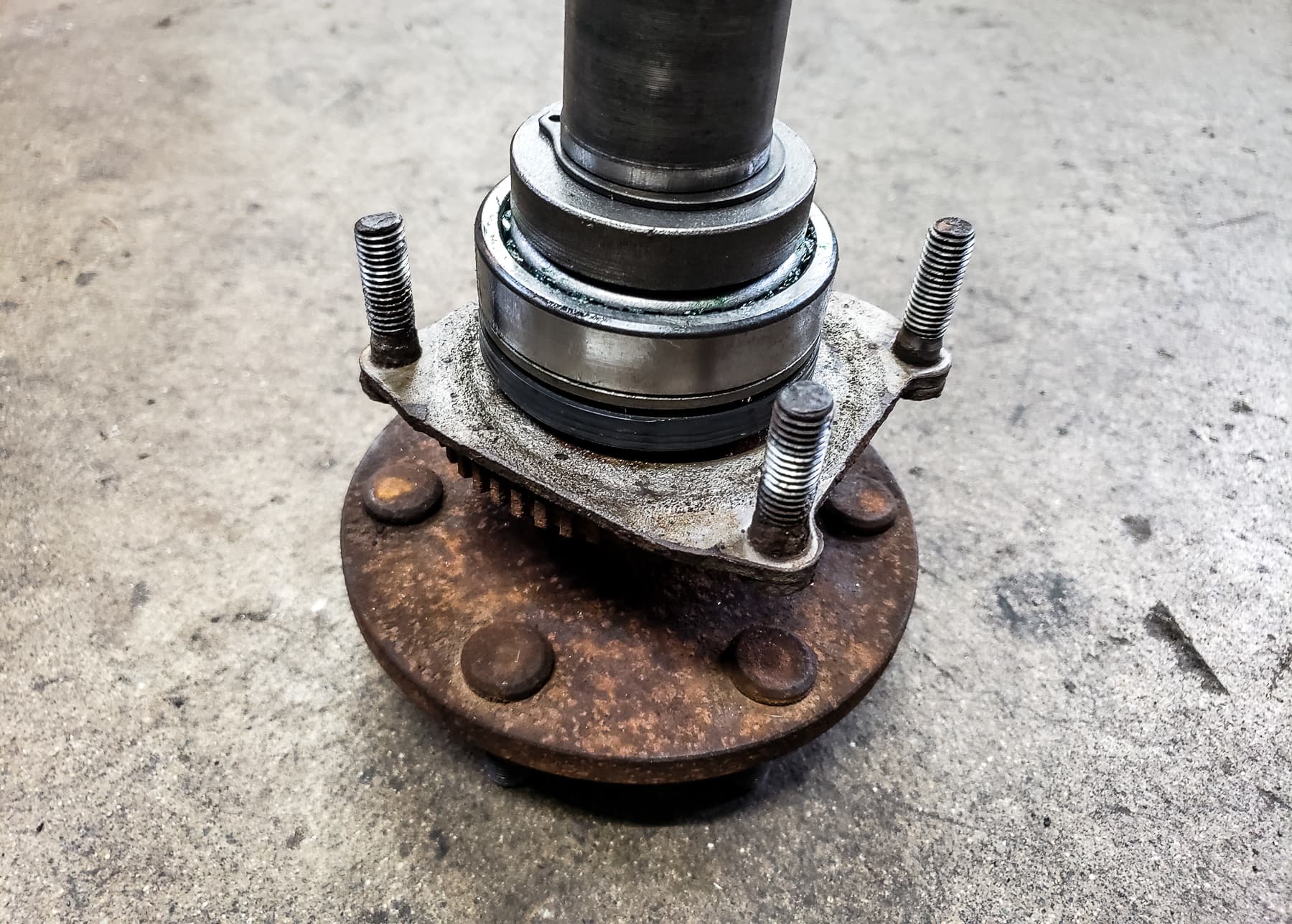 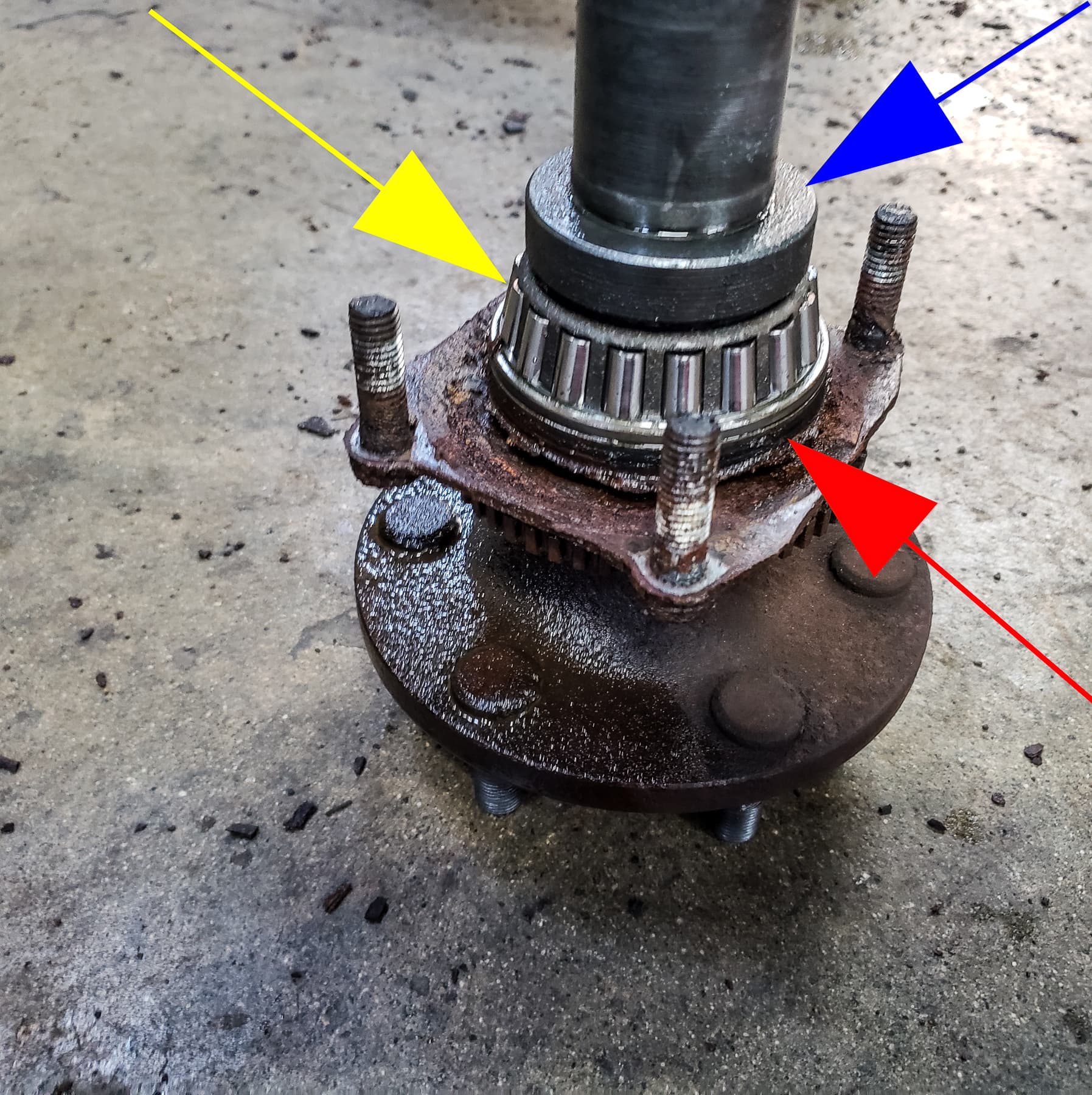 And let's just have a look at the axles. So there is the axle before replacement. So here's, what's involved in actually getting it apart. So the brake drum. This is the part that bolts into the actual axle housing. The brake backing plate is in between there.

So the axle retainer has to be removed first. So it's basically a break-off component, one time installation. We break that off by either drilling it or chiseling it. However we get it off, it's broken off. Then the bearing either we pull it off with the hydraulic press or just simply break it apart, into pieces, pull it apart and get the bearing race off the axle. And then the seal comes out of there.

And finally, this is the unit put all back together. You can see there's no oil on this axle. You can just see the abs wheel speed sensor. Sorry, not the sensor, the reluctor wheel, the ring here. And then the new bearing, new axle seal, new retainer. And there's actually even a circlip that actually holds it all to the axle. Heaven forbid this isn't holding. It won't slide off and your axle won't just go flying off down the road with your wheel attached. Which would be a pretty scary thing.

Mark: Were there any further repairs needed during this service?

Bernie: Yeah, the only other item, there was an issue with the abs wheel speed sensor. The sensor was basically rusted into the brake backing plate and we had to, actually broke apart when we took it apart. So that needed to be replaced as well. That's not untypical. When you get an older vehicle, a truck, especially it's been through the bush or just seeing a lot of rain. The sensors are usually a plastic piece that sits inside a metal housing. The housing will start rusting and then it'll kind of lock the plastic in place and it doesn't normally come over easily.

So that was the only other thing. Fortunately he'd replaced it in the right time. It hadn't damaged the brakes in any sort of way. If you have a leaking axle seal, that's what you want to do. You want to fix it before it leaks oil onto your brakes? Otherwise it's added expense.

Mark: And how our Nissan frontier pickups for reliability?

Bernie: Yeah, that's a good truck. I'd highly recommend it. Good, nice sort of medium, I call it a medium sized truck, I guess they used to be small trucks, but kind of a nice mid-size pickup truck. All wheel drive, good off-road capabilities and they're reliable. There's not a lot that goes wrong with them. You know, this vehicle has got quite a few years on it, so not unusual to replace axle seals at this point in time.

Mark: If you're looking for service for your Nissan in Vancouver, the guys to call are Pawlik Automotive. You can go to the website pawlikautomotive.com to book your appointment. Or you can call 604-327-7112 to book your appointment. You have to book ahead. They're always busy. Or check out the YouTube channel. Pawlik Auto Repair, hundreds and hundreds of videos on there. No exaggeration. All makes and models and types of repairs done this for over a decade now. And of course, we really appreciate you watching and listening. Thanks, Bernie.