Mark: Hi, it's Mark from Top Local. We're here with Bernie Pawlik, Pawlik Automotive in Vancouver. Vancouver's best auto service experience and celebrating 30 years of operating as a company in Vancouver, BC, and only 22 time winners of Best Auto Repair. Bernie, what happened in the first eight years?

Bernie: We didn't win. I dunno. We're a small business, so it's just grown into winning some awards, which has been fantastic.

Mark: So today we're going to talk about a 2007 Porsche 911 that had a transmission fluid problem. What was going on with this vehicle?

Bernie: So well, initially didn't come in with a transmission fluid problem but the client's concerns were that he'd bought the vehicle over the last little while, took it into a shop to get some service. And they replaced the transmission fluid among some of the service. And after the replacement, he noticed that the transmission was, they may have mentioned it to him or he noted that, especially when the transmission was cold, it was difficult to get it in first and second gears and making the shifts in those gears was kind of notchy and grindy and you know, had a concern about it. And the other shop had kind of hinted, you probably need to replace the clutch. Even though it had been done about 20,000 kilometres ago, but they kind of figured out a clutch is probably worn out. And he was not exactly keen on the idea. It's an expensive job. And seeing it had been done, you know, figured maybe that wasn't the case. So he contacted us and we had to look at the car.

Mark: So how did you proceed to diagnose and service the car?

Bernie: So, you know with an issue like this, of course, a good discussion with the client is a really good place to start. You know what was done for previous service? When did exactly the issue happen? There's a lot of expensive parts at play with these cars, so it's good to kind of know when the issue happened. I mean, and this is the case with any car. So he said to me immediately after the transmission fluid service, the transmission didn't feel like it shifted properly. So to me, that was a clue that something went wrong in that particular service. So he had brought me invoices and they'd used an aftermarket fluid instead of the original Porsche fluid. And, you know, generally that's not necessarily a bad idea, but we personally have had other cars you know, that we've done, we've changed fluids and not use the original manufacturer's fluid and run into issues with certain things like shifting problems. And so my suggestion to him was we should probably change it back to the original fluid. That would be the place to start.

Mark: So why? Why would an original fluid be that much different than an aftermarket? Aren't these specifically kind of formulated the same or to be to meet the same specifications.

Bernie: Well, you'd think so. And a lot of times when you look on the label of a certain fluid, it'll say, this fluid meets this specification. And you know, it meets the OEM specs, but really a lot of times they just, the manufacturer's fluids they'll slip some kind of subtle ingredient in that makes a difference with the friction material, say in the synchro mechanism. Or we have like hall decks units, which are you know for all wheel drive vehicles. And sometimes you have to get exactly the right fluid or otherwise it'll chatter or vibrate. And so these are some of the things that make a difference with different fluids. Even though a lot of the, you know, aftermarket fluids are really high quality, they just don't always work with certain vehicles.

So it's always safest to go with the OEM fluid. Unfortunately, they often costs substantially more money, but you know, you want the car to work right, and you don't need to change fluids that often. So it's usually worth the extra price, especially if it doesn't work properly.

Mark: So you replace the fluid. With the original spec fluid from the manufacturer. Did you find anything else?

Bernie: Yeah. Well, this is where we found something else that was really interesting and no doubt causing the problem and it might be that it would have worked okay with the aftermarket fluid for this other interesting issue that we found.

So I'm just going to go for a screen share here. 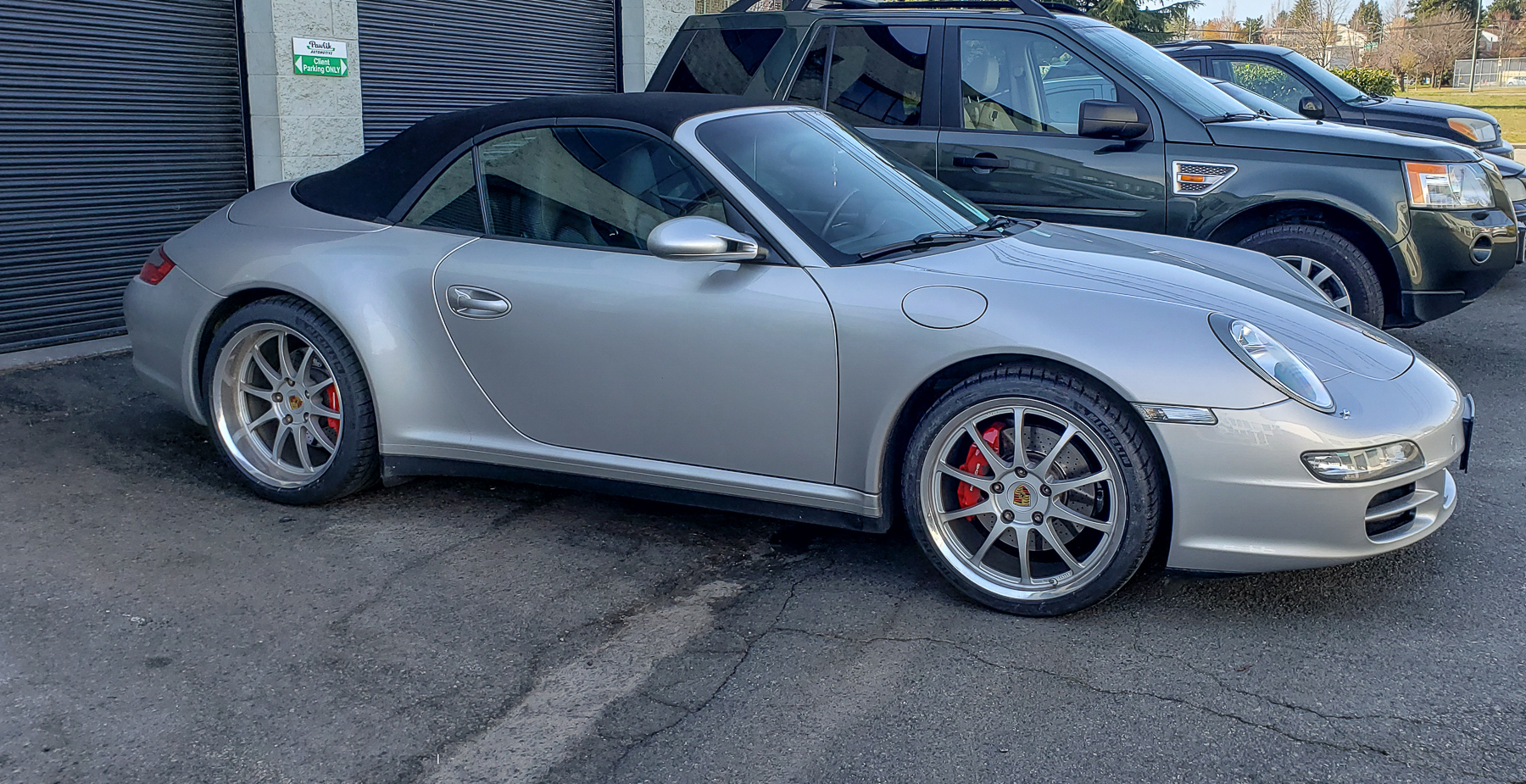 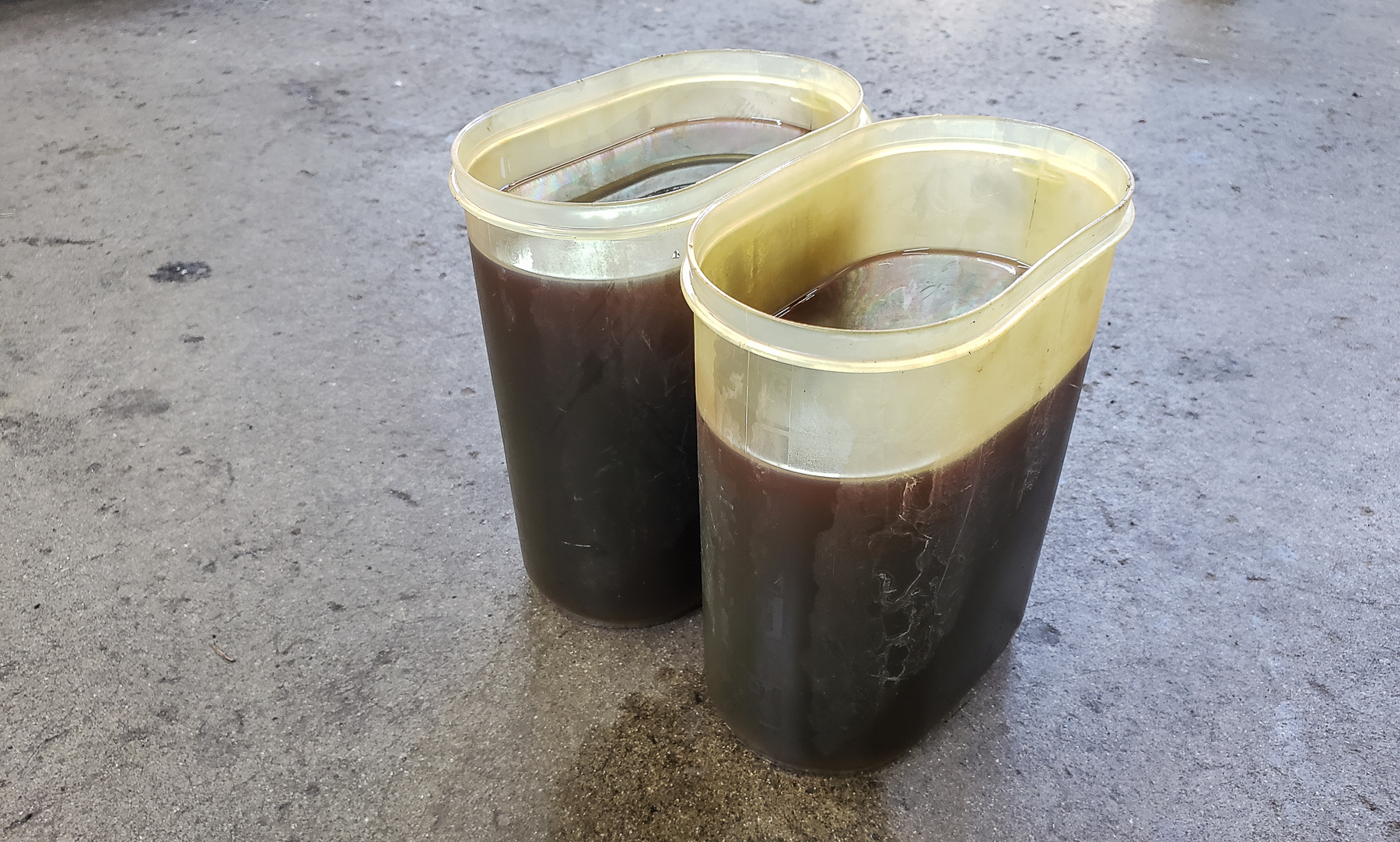 So there's our a nice. 911 4S convertible. What else can you say? It's a beautiful Porsche sports car. What else we found was that when we went to change the fluid, my technician Ed, fortunately actually captured the old oil. And what he found was seven litres of fluid in this transmission. And the actual fill spec is three litres.

For some reason, you know, on the original bill, there was five litres of fluid and I'd ordered five from Porsche, not really looking at the factory spec. And then when we went to fill the transmission, you know, we found that it had been overfilled by basically, this represents about three litres which is the amount of fluid that should have been in the transmission. But this is how much we took out of it.

Mark: Was that both of those together what you took out?

Bernie: Yeah. The most of these together is what we took out. So this is seven litres of fluid.

Mark: So more than one bucket full overfilled. Unbelievable.

Bernie: Yeah, really amazing. And so, you know, not only did this vehicle have, I'm not exactly the right kind of fluid, but it had far too much fluid. So, you know, again, with the standard transmission trying to, you know, move things around. And areas were lubricated that weren't ever meant to be lubricated. And there's a lot of fluid to be pushed around.

Plus, the owner had said that, you know, the transmission, and I experienced it myself because we had the car a couple of days and I drove it. You know, when the transmission was cold, it was much worse. And of course it takes a while to warm up that much fluid. There's you know, more than twice as much fluid. Whereas if you had the normal capacity, as you're driving down the road, the fluid will warm up faster and operate better. So there was quite a few things going against the operation of this vehicle.

Mark: So how's it possible to overfill the transmission this much?

Bernie: Well, that's an interesting question. And it's only because of the way this transmission, it has two fill plugs on the side of it. And there's the right fill plug, which is located lower down on the transmission. Then there's the wrong fill plug. I dunno why it even has it. Because if you don't know what you're doing, and obviously whoever actually did the service, done by, you know, a reputable shop. But whoever was actually doing the service did not know that it was the lower fill plug you're supposed to fill it to, not the upper one. So this is why, yeah, I don't why it has an upper fill plug. It doesn't have to have it and it really confuses people. But this is why you need to know what you're doing when you work on a car. And that's the reason. There's an upper fill plug, and so it actually allowed the transmission to be overfilled.

Mark: Those sneaky Porsche engineer's. How did the transmission shift afterwards?

Bernie: It was really good. I went out for road test and sometimes it takes a while for the fluid to kind of work its way through, but it was a, you know, pretty much after a few miles of driving, it was pretty noticeable. It shifted really nicely. Really smooth you know, clearly a clutch was not needed. And it's a case, you know, for use the right fluid and it makes a big difference.

Mark: So there you go. If you're looking for service in Vancouver for your Porsche or Porsche, the guys to see are Pawlik Automotive, you can reach them at (604) 327-7112 to book your appointment. You have to call and book ahead. Even now, they're still busy, and in Vancouver only, please. We're not dealing with you folks in the lower 48. Check out the website, pawlikautomotive.com if you want to read more, there's over 600 articles on there about repairs of all makes and models of cars. Videos on YouTube, Pawlik Auto Repair. And thank you very much for listening to the podcast. We appreciate it. Leave us a rating on wherever you're listening to your podcast that, whether that's at Apple or wherever, and thanks Bernie.

Bernie: Thank you Mark, and thanks for watching.