Mark: So a 2007 Porsche 911 4S that had some water problems. What was going on with this vehicle? 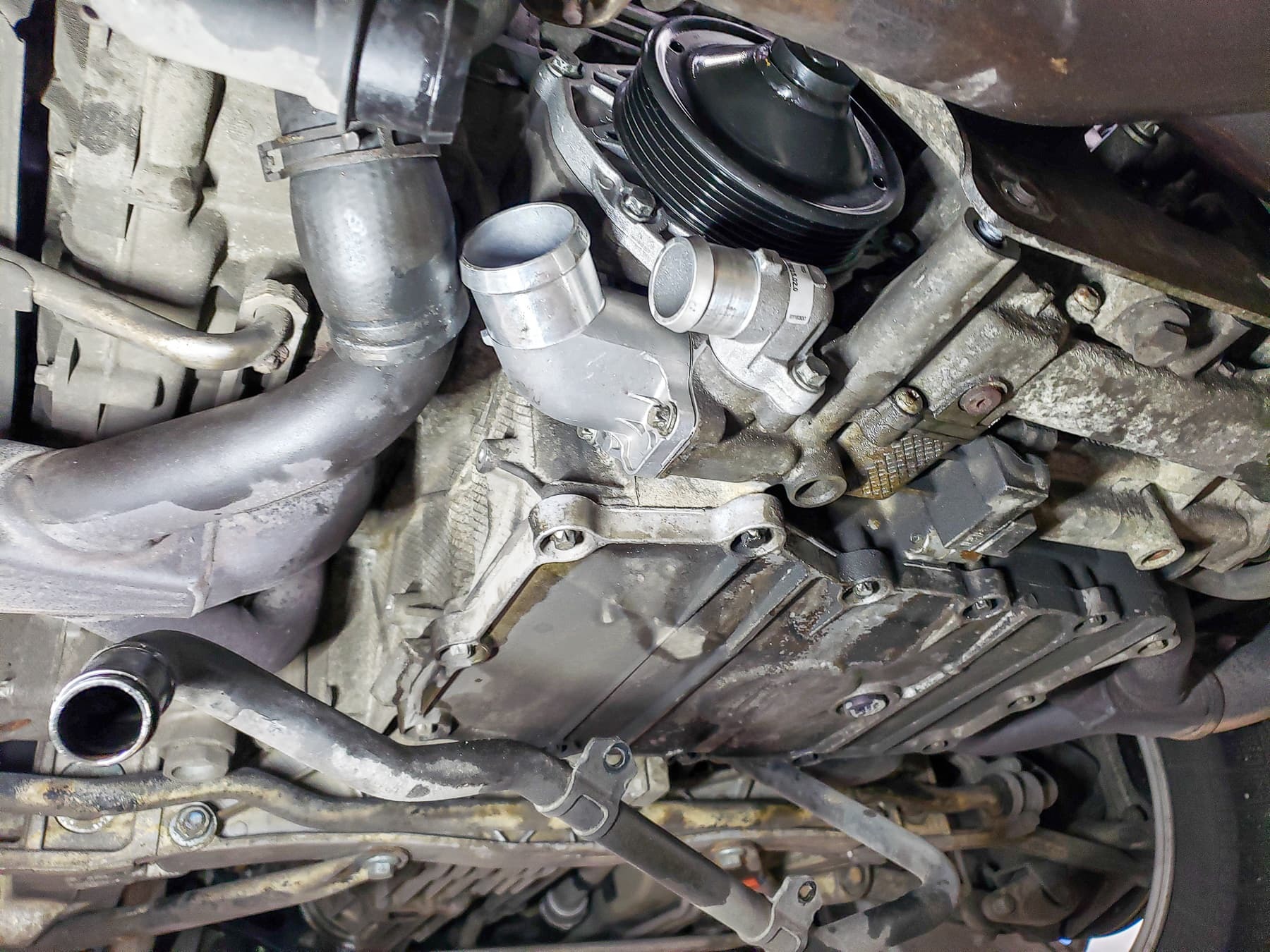 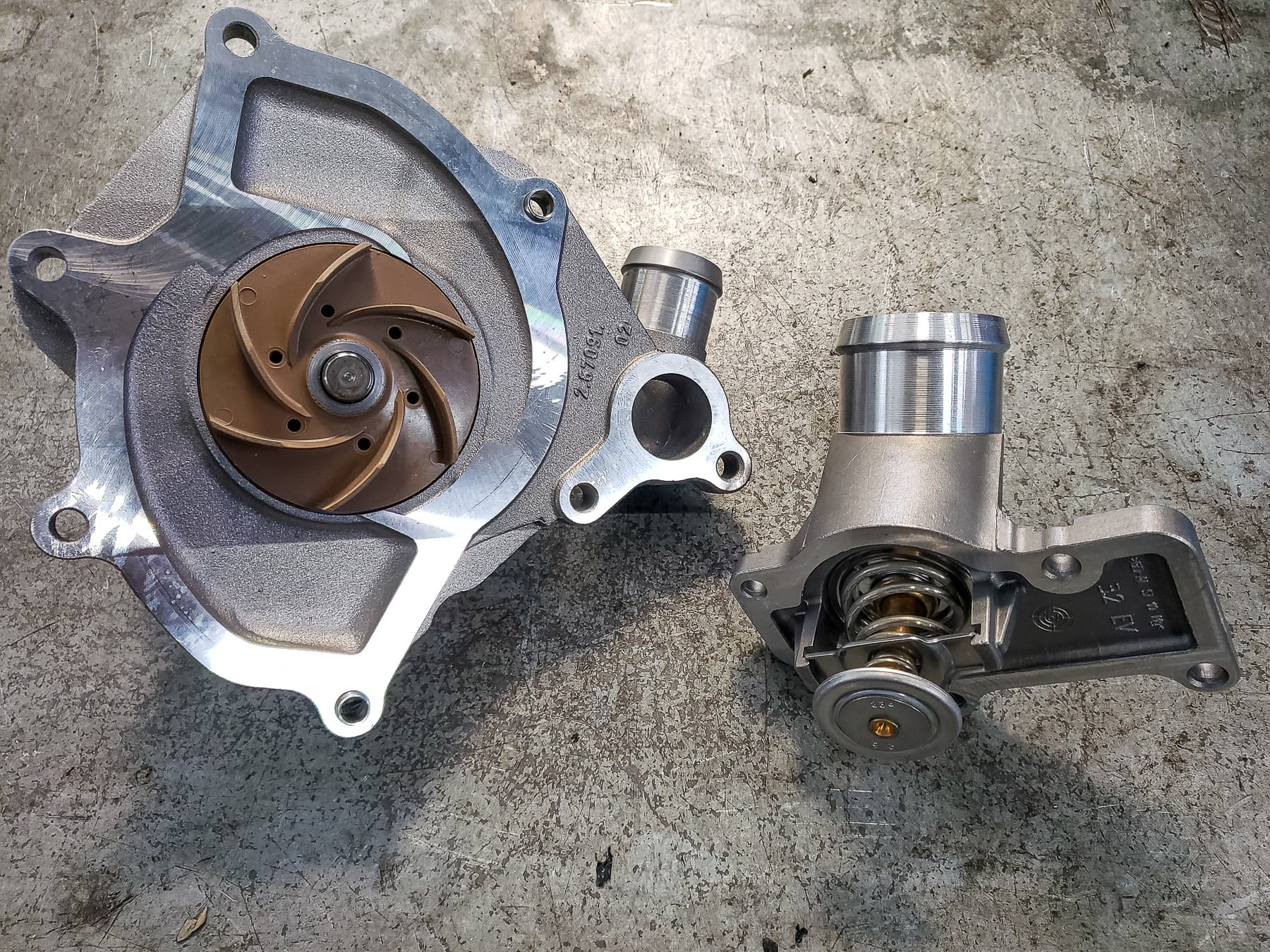 Bernie: So the owner of the vehicle, we'd had a conversation with him and we replaced the water pump and thermostat just for maintenance purposes. No failure. Just preventative maintenance.

Mark: So why would you replace the water pump for maintenance reasons?

So it's important to make sure that it's in good functioning order. We know Porsche engines are very expensive and the owner wanted to make sure that he was doing the proper preventative maintenance to keep the engine reliable and healthy.

Mark: Yeah, I guess with the age it's 13 years old, it could be, it's just a heat issue because it's hot and cold because of the temperature variations on the water pump. Is that why they fail?

Bernie: I think so. I mean, the first time I ever encountered one of these was many years ago and a Volkswagen and the engine was overheating and it appeared to be, we diagnosed that, Oh, it must be a sticky thermostat because the water pump was turning. Usually when a water pump up until that point, you know, the water pump failures we'd ever seen would be like a broken belt or the bearing would wear out, but a pump would not fail the pump.

So we replaced the thermostat and found the water pump it's done. The engine was still overheating. It happens slowly, not really quickly because you've got a full body of coolant, but nonetheless, it was overheating. So we kind of went further, pull the water pump out, oh, the impeller's like cracked in half. So it may be the quality of the plastic was not up to snuff. There's you know, being a Volkswagen, it is a lower priced product. So it may be that they didn't use quite as good quality, but we see it in other water plastic water pumps. It just cracks, you know, from heat cycling.

Mark: So is given that, is replacing a water pump a factory maintenance scheduled item?

Bernie: It is not, no, it's not a factory item, but I'd say that more progressive Porsche mechanics is something we would recommend.

Mark: So did you find anything wrong when you actually replaced it?

Bernie: No, we didn't. And I was just going to mention, we did replace the thermostat at the same time as well, which is located right nearby. And again, the thermostat is an item, just a little plug in about a thermostat. I mean, it's an item that can fail without warning. So you know, and sometimes they don't, you know, even after years of use, they won't quite operate exactly as they're supposed to. So putting a new one in, it ensures that the engine is going to warm up at the correct rate and not overheat. But yeah, we never found anything wrong with them that the parts all look good, which is actually a good thing.

You don't really want to be replaced. I mean, it's satisfying when you replace something's broken and it works properly afterwards. But you know, fixing it beforehand that just ensures that you have complete, consistent, easy driving. It's kind of violates that rule of if it ain't broke, don't fix it. But you know, I think we're all happy when we get in an airplane, they replaced the hydraulic hoses before they actually blew out. So if you want that kind of reliability of driving, it's good to replace some failure oriented parts before you go.

Mark: So when you replace a water pump, do you still use the plastic impeller or are there metal impeller water pumps available?

Bernie: Depends on the vehicle. And this one, we used a plastic impeller pump. That's all we were able to find. And it's, you know, as much as I've probably trashed talk plastic impellers in the past one thing is come to realize around them that is valuable is when they do, if the bearing were to fail, the plastic isn't going to chew up the aluminum housing, which in this case is of course the engine block.

And the last thing you want is to really have a chewed up engine block and put a bunch of debris in it. Metal filings and of course actually possibly even damage the engine block. So plastic actually makes sense from a certain point of view, not just the minute weight savings, but the actual damage that could occur.

So we put a plastic impeller pump back in. And it should last the same amount of time that this one did. It's a good quality OEM pump.

Mark: So it's a Porsche, it's a high performance vehicle. How are they for reliability?

Bernie: Well, I think Porsche's are awesome. I mean, for the kind of car they are for the sports and high-performance car, they are really reliable. There's very little that goes wrong with them generally. I mean the one mechanical fault, I'd say about these cars, you know, a lot of these engines have that IMS bearing that you can do further research on, but it's probably a really, probably a dumb piece of engineering on Porsche's behalf.

But really other than that, they're really well built engines. Well-built cars, they are very reliable for what they do. So it will spend more money fixing them because that's the kind of car it is. But generally it's a well-built car and most people take really good care of them too.

So that makes for another pretty good used buy, they're not like your average beater or Chevy or people will just run it until all of a sudden something fails and they don't care to change the oil enough. These cars, generally people do care to take good care of them.

Mark: So, are there any tips you'd offer as far as keeping your Porsche running? Like how critical are oil changes or air filters or any other particular things just like you did with this water pump?

Bernie: Yeah, well, I mean, routine oil changes are critical and Porsche have really long intervals for oil changes. You know, they're in that camp of European vehicles that have ridiculously long oil change intervals, and I would definitely not follow that part of the schedule. And most people don't drive them enough where they're probably going to be changing the oil with a time factor, more than a mileage factor.

So I mean, certainly change your oil every, you know, 10, 12,000 kilometers. I think a lot of the factory recommendations are in the over 20, 25,000 Ks, which is way too much. They do have a large oil capacity, so that takes a long time to get dirty, but really it's better to change it more frequently. Just routine inspections, oil changes. These are kind of important things to do. And a few preventative items like, you know, the water pump after 10 or so years. You know, these are important things to do.

Mark: So there you go. If you're looking for some expert help on your Porsche, that's not going to cost an arm and a leg, but is experts still, the guys to call are Pawlik Automotive. You can reach them at (604) 327-7112 to book your appointment. You have to call and book ahead because they're always busy. Check out the website pawlikautomotive.com. Hundreds of videos on there on repairs for all makes and models of vehicles, including lots on Porsches, as well as check out our YouTube channel, Pawlik Auto Repair, eight years worth of hundreds of videos on there, enjoy those. And of course, thanks so much for listening to the podcast. We really appreciate it. Thanks Bernie.