Friday’s featured service is wheel bearing replacement on a 2007 Toyota Tacoma 4×4 Pickup, brought to us by a client from Delta, BC.

Toyota Tacoma trucks are built tough and generally give few problems. This vehicle had over 200,000 kilometers of life experience and came in with a few concerns. While road testing the vehicle a slight wheel bearing hum was present.

On the hoist the noisy bearing was very noticeable with a spin of the left front wheel. The wheel bearing assembly on this vehicle contained both wheel bearings mounted together however the hub and seals required separate replacement. In the case of the hub, it was perfectly reusable so we transferred it the new wheel bearing.

After taking the hub out of the old bearing it became evident why this unit failed: the outer bearing was rusty. Water had leaked in and worn it out.

Wheel bearings fail for several reasons: water infiltration, as was found with this bearing is one. Another common cause is banging a curb which can ‘dent’ the bearing surface. Improper installation and repair can also cause failure. Eventually the grease in the bearings will become ineffective and the bearing will wear out.

After replacement our client’s Toyota Tacoma rolled down the street quietly; as we expected.

For more information about the Toyota Tacoma click on this link http://en.wikipedia.org/wiki/Toyota_Tacoma 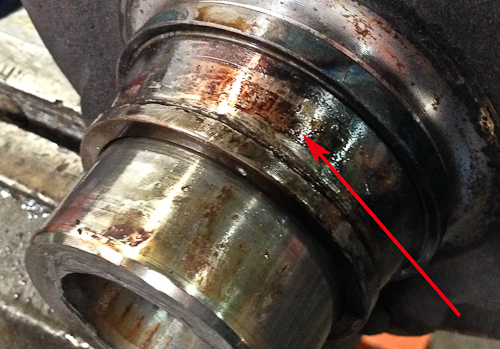 Inner race of outer wheel bearing still mounted on wheel hub. The red arrow points to the rusted areas of the race. This surface should be a smooth and shiny