Mark: We’re going to talk about a 2008 BMW 128i that had some ignition coil problem. What was going on there? 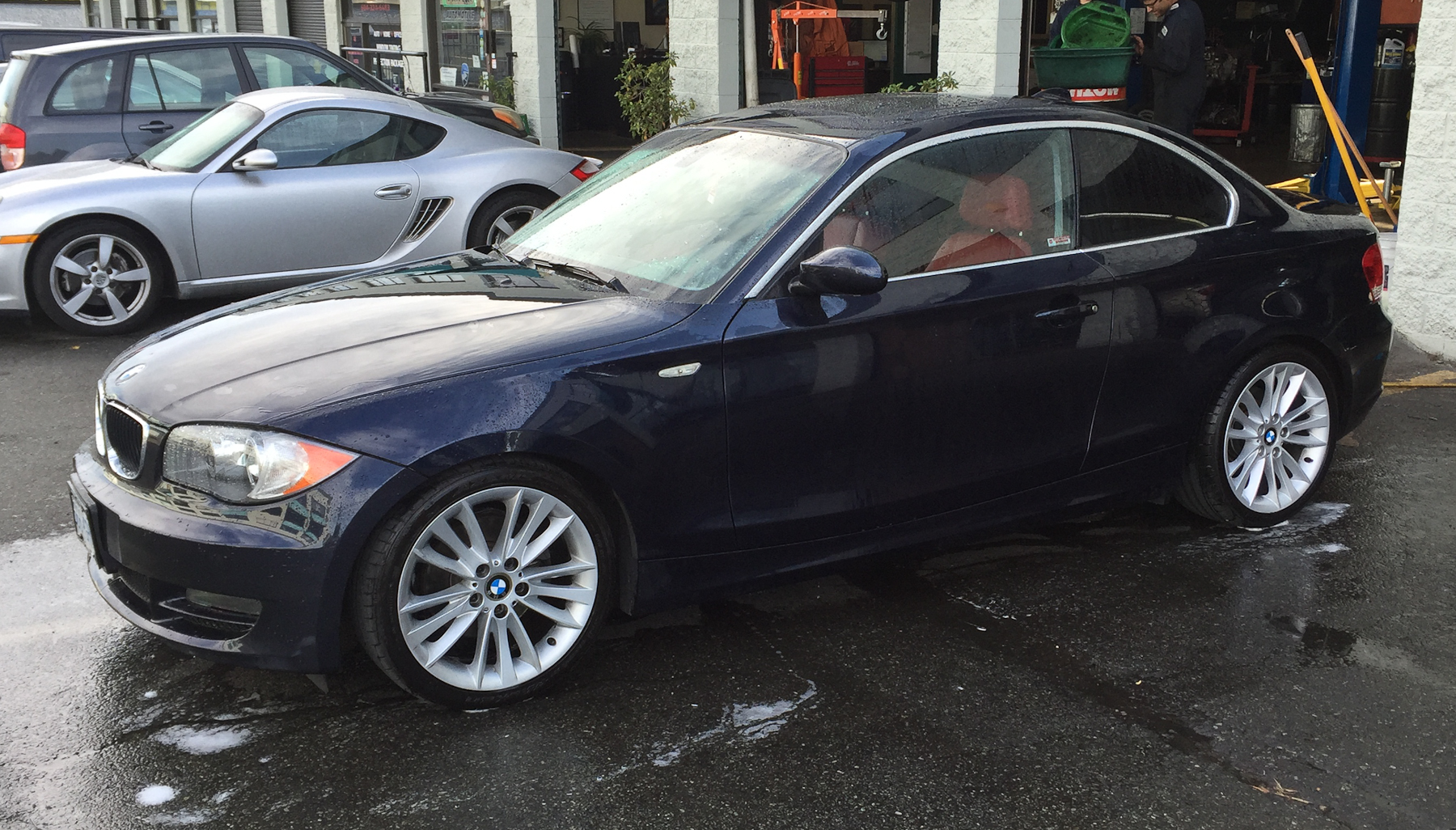 Bernie: So this vehicle came to our shop, was running rough and the check engine light was on.

Mark: So what did your diagnosis find?

Bernie: What we found was, so we connected the scan tool and we found there was several codes stored for engine misfires, did some further diagnosis and we found two ignition coils that were dead. Typically when this happens, we normally replace all six, there are six of them and if one dies or two dies, usually the others are not too far behind, that’s what our experience has found with these cars. In the past, we’ve done one or two and then found the customer may often come back in a couple months with another dead coil. So it just kind of makes sense to change them all.

Mark: So are ignition coil failures common on these cars?

Ignition coil from BMW 128i

Bernie: They are actually, we do quite a number of them and yeah, so this is a pretty common issue. That and a lot of German cars, it seems like Audi as well, Audis and Volkswagens, the coils fail. Fortunately they are not overly expensive parts, so to change six of them, or four or eight depending on how many your engine has are not hugely expensive. But it is pretty common on these BMW’s.

Mark: Was there anything else that you repaired on your service while doing this job? 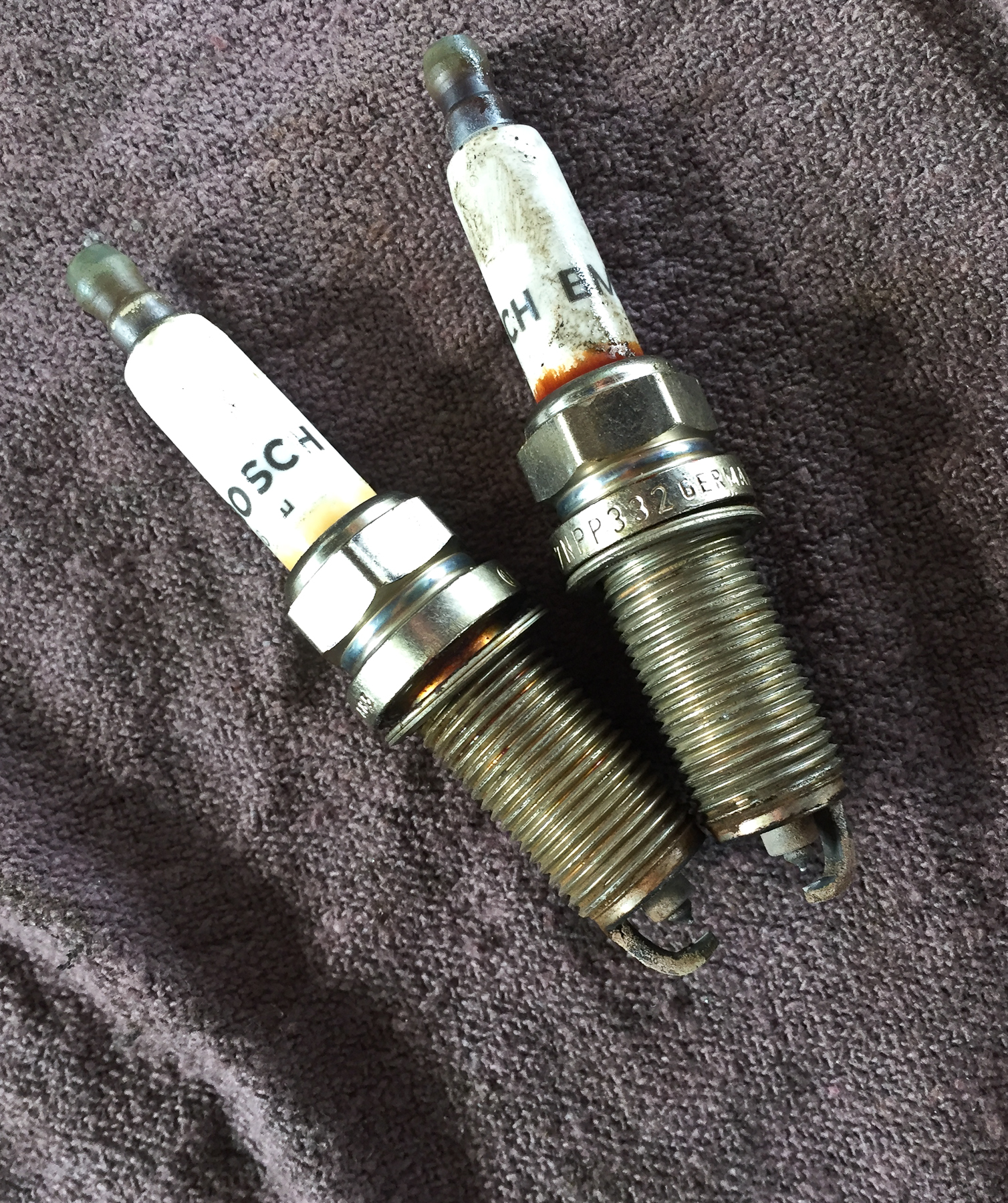 Spark plugs from BMW 128i

Bernie: Well we did the spark plugs as well, this vehicle had enough kilometres on it that the spark plugs were nearly at the age that they need to be replaced. It’s not a lot of extra work once the ignition coils are out to change the spark plugs. So that makes a lot of sense. We also changed another part, when we’re doing ignition coils, we noticed there was an oil leak, a small oil leak from a part called a Valvetronic Motor Gasket. So we replaced that as well, it was right in the vicinity, a little extra work but not a lot when we’re doing the ignition coils. So I’m just going to share a couple pictures while we’re here - so how does that look, can you see the picture of the gasket? Here is our BMW, a nice little 128, it’s a small compact BMW. There is a view of the ignition coil, as I said there are six of these parts and that’s what one of them looks like. Spark plugs, which is a sample of a couple of the old spark plugs that we replaced, and this is our Valvetronic motor gasket. If you look at the bottom on the picture you can see there’s a sort of oily film, that’s where the leak was coming from.

Mark: So what is a Valvetronic motor?

Bernie: A Valvetronic motor, sorry we’re still screen sharing here, ok we’re back, the Valvetronic motor is basically, it’s an actuator for the variable ballast timing. BMW uses a sort of a, it’s a, how do I describe it easily, there’s a sort of extra arm on the camshaft and it adjusts the valve timing, so it’s BMW’s method of variable valve timing and it works really well. It’s amazing, it has an awesome set of these broad cast style, the power you get out of a modern engine and this is just one of those kind of devices that gives you that smooth power from low end to high end on many modern engines. So the motor basically in a very fast amount of time will adjust the valve timing to whatever the computer desires it to be. 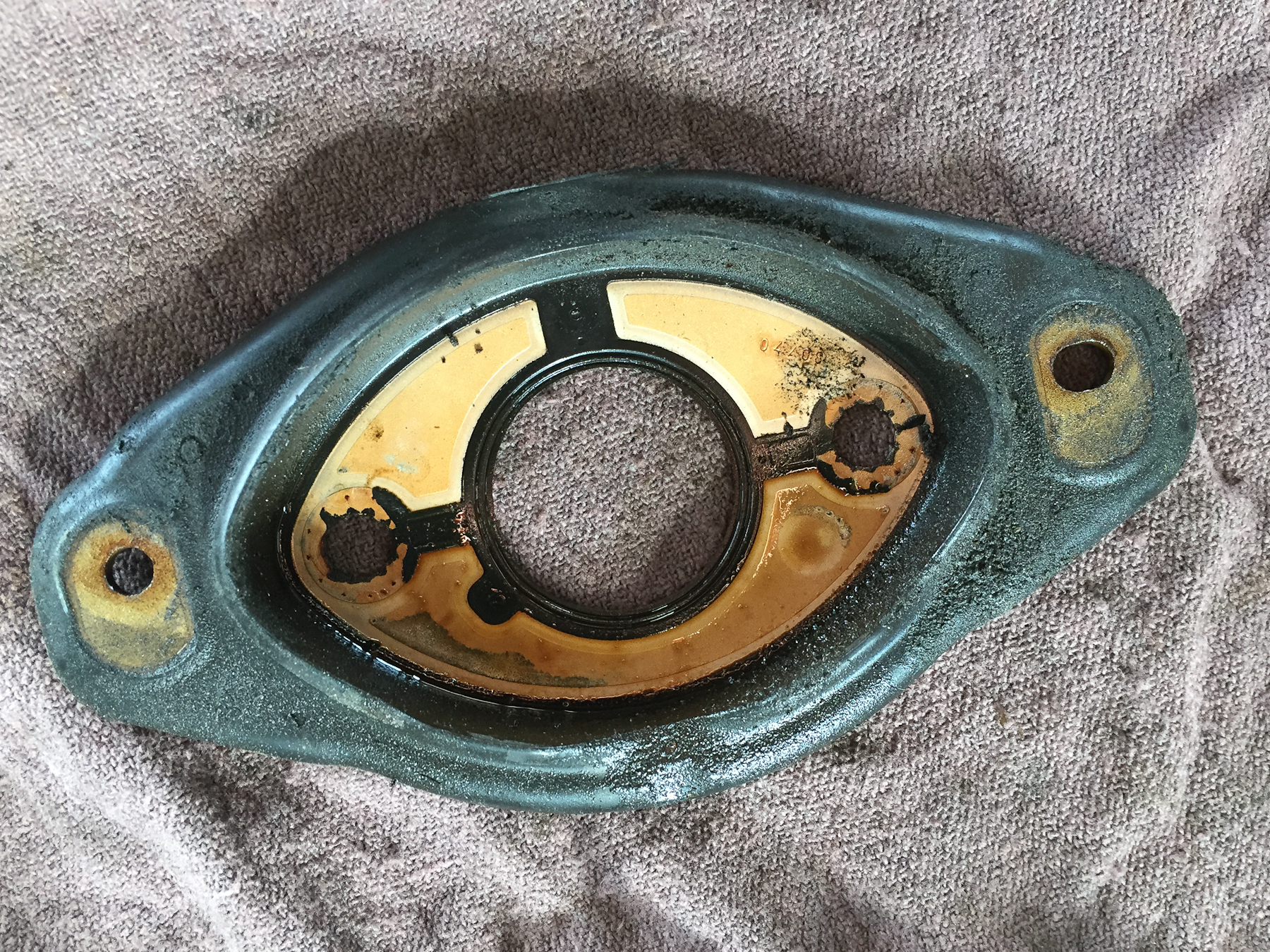 Mark: Based on load and speed.

Bernie: Load, speed, fuel economy needs, exhaust emissions, it’s all taken into account and into the brain of the vehicle computer and sets everything, it’s pretty amazing. You know, it’s another thing to go wrong but I mean, generally they’re, generally the system is quite reliable. We’ve rarely replaced any parts or pieces for it, but given enough time, like they say with anything, it’ll break down but this gasket was not an uncommon leak. So just fix them and it’s done

Mark: So how are theses cars overall?

Bernie: They’re pretty good, they are quite reliable, you know ignition coils, we certainly see a number of those pieces, there is the odd oil leak. I think generally, I think the car is quite reliable but there’s an interesting study that came out a couple of months ago about overall car maintenance costs and the BMW came out on top as the highest maintenance cost vehicle, so just something to note if you’re buying one. Now I’m sure it’s not as bad as a Ferrari or something exotic, but as an average look over car, BMW came out as being the highest cost. Interestingly enough, if you want to know the lowest was a Toyota product, Toyota Lexus and Scion. So, something to keep in mind but still a great car, you know I mean, not that crazy amounts of things go wrong with them.

Mark: So if you have a BMW that needs some service, the guys to see in Vancouver are Pawlik Automotive. Give them a call to book at 604-327-7112. Remember they are 17 time winners of Best Auto Repair in Vancouver as voted by their customers. Thanks Bernie