Mark: So today's victim is a 2008 Ford Edge that had a driveshaft issue. What was going on with this vehicle?

Bernie: Yeah, so this vehicle came to our shop. The owner's complaint was there some vibrations when driving the vehicle. And so we proceeded to do some testing and diagnosis on that particular issue.

Mark: And what testing and diagnosis did you do?

Mark: So, did you just replace the bearing or was there something else involved?

Bernie: Well, we would love to have just replaced the bearing, but unfortunately Ford only sells this bearing as part of the drive shaft complete. And it was only available from Ford. And yeah, so it was a complete drive shaft replacement kind of the way it was manufactured.

We'll get into some pictures here cause there's a cool stuff to look at. So we'll just start right off with a video of the bearing. If you just have a look right around this area here you'll see what was going on. As you can see that rubber piece is completely broken apart. That's what holds it steady. Just play it one more time, just in case you didn't catch that. It's impossible to miss. So that's basically what we found was worn out. 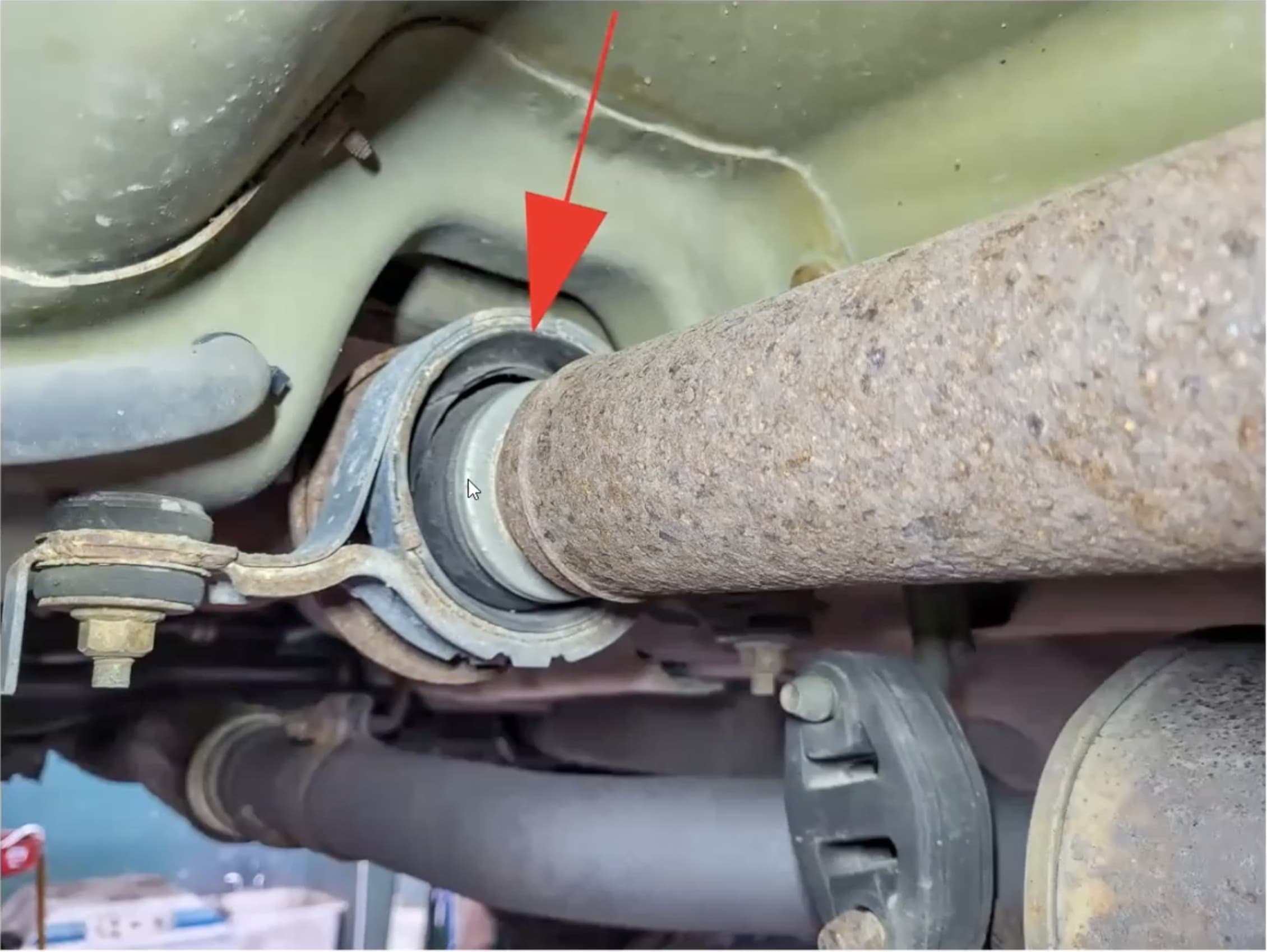 Here's a photograph. You can see from the picture, the arrow kind of points to the broken section on the shaft.

So we were not able to replace the whole piece. It comes complete as a unit. And I'll be honest, I'm not sure which of these two bearings, I think was worn out, actually you can see, there's two of them. It's pretty complex drive shafts. Three universal joints, plus a flexible CV joint type coupler on one end, two centre bearings and with these shafts here now, if you look closely at how it's manufactured and as a matter of fact, I have another picture. That's a little more of a close-up of this. 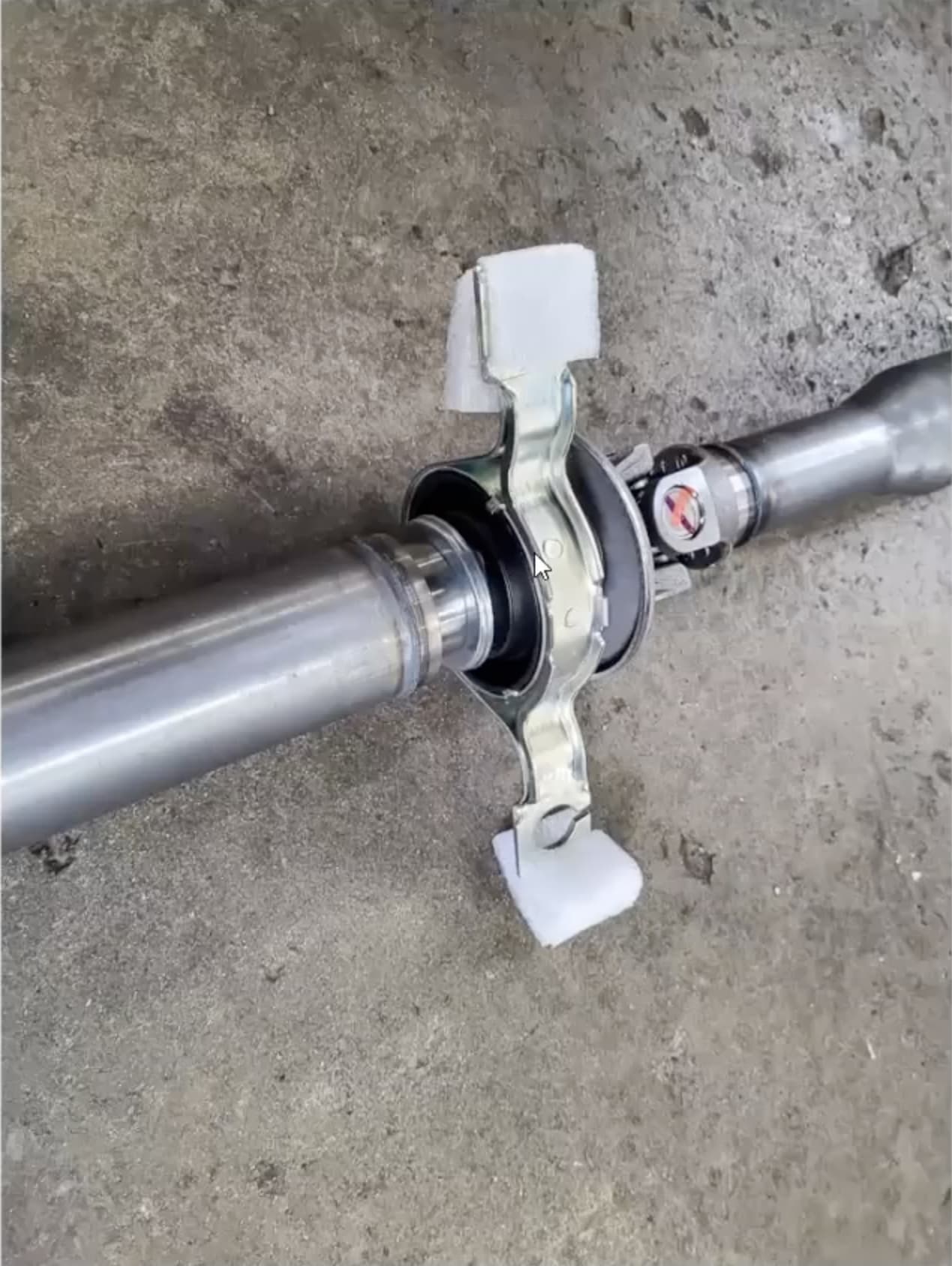 You can kind of see that this is just put together as one piece and there's no way you can actually take it apart. Normally in the olden days there'd be a slip yoke or something that would come apart. You'd be able to take the centre, bearing off, put a new one in a way you go, not a huge amount of money, but with this unit here, you're left with the new style of manufacturing, which has it all as one complete piece. And a very nice piece, I might add.

Mark: So how common is it to have to replace whole assemblies compared to individual components?

Bernie: It's getting more and more like that. And yeah, it's getting harder and harder to find parts that are, you know, like, like things used to be manufactured in the past where there'd be individual pieces and, you know, I sorta wonder why is that?

Well, this is probably a more compact design than a traditional type of drive shaft. And the Ford Edge is a vehicle that's offered as a front wheel drive or an all wheel drive. So a lot of times they have to kind of shoe horn in the drive shaft, and there's a lot of tight spots to put things. So it might just be with the compactness of the design that they make them so you can't replace them. You know, when I think about it, this isn't really entirely new.

I mean, Japanese cars for probably at least three decades, maybe even four have had it such that universal joints aren't really replaceable. It used to be, you know, on some American trucks you can hammer the U joint out, put a new one in, but Japanese a long time ago had U joints where they're kind of staked into place. They're kind of part of the drive shaft assembly and weren't replaceable. So it's not entirely new to have it like this, but it's a little surprising on a Ford to see that.

Mark: And so after repairs, I guess the Ford Edge was a joy to drive again.

Bernie: It was. It was really good. And it was going to say, you know, as much as I sometimes complain about you know, all the costs of, you know, because it's a lot more money to buy a drive shaft. This vehicle did have, you know, close to 200,000 kilometres. So that's a pretty decent amount of driving and a decent amount of distance. And, I guess it's fair at that point that this part would be worn out. Unfortunately makes for kind of an expensive repair on an older vehicle, but the owner takes pretty good care of this vehicle and it's in good shape. So why not keep going with it? It's cheaper than buying a new one.

Mark: If you're having any drive shaft issues or you need repairs on your Ford, the guys to see in Vancouver are Pawlik Automotive. You can reach them at their website pawlikautomotive.com. You can book your appointment right on there. They'll get back to you. They'll find out what's going on. They'll get ready for your appointment. Or you can call them at 604-327-7112. Again, that's in Vancouver, BC, Canada. Check out our YouTube channel, Pawlik Auto Repair, close to a thousand videos on there. All makes and models and types of repairs. Of course, if you want to read the blog, same thing, they're all there. All the written stuff is there. Enjoy it. Thanks Bernie.