Mark: So a Ford Edge, 2008, that had a fuel injector problem. What was going on with this vehicle?

Bernie:So the vehicle came to our shop with a couple of concerns and one of them was that the engine was running rough and the check engine light was on.

Mark: So you did some testing and diagnosis. What did you find?

Bernie: Yeah, so we, of course our first step in testing is hooking a scan tool up to see what trouble codes we have. There was a code P0301, which is a cylinder one misfire, and there was also a code for a misfire on startup. So clearly the problem was you know, indicated which cylinder it was. We did some tests and verified, in fact, number one cylinder wasn't firing properly, not completely dead, but partially dead.

The testing and diagnosis on this was interesting because a lot of times, you know, it'll be a bad ignition coil. A lot of these, they have an ignition coil per cylinder. They tend to fail quite frequently. And so we often come into our diagnostics with assumptions. Oh, it's probably that, but in fact, that coil had been replaced about eight months ago at another shop. Still doesn't mean it wasn't a problem. So we ran some tests. We have a lab scope where we can actually get a pattern, like a firing pattern on each coil. So we tested the coils that we could, the rear cylinder bank is a little difficult to access on this vehicle because the intake manifold hangs over the back of the rear cylinders.

And number one cylinder just happens to be in the back where it's not so easy, but the coil was visible and we were able to at least test the pattern on the coil seemed to be fine, but just a verifying testings further, we remove the intake manifold as much as we needed to. Pulled the coil out, swapped it with another cylinder, verified that in fact that coil is good, inspected the spark plug. It was good. Did a compression test on the cylinder. It was good. So that kind of narrowed us down to either a major vacuum leak or a fuel injector. So we went and performed some tests on the fuel injectors.

Resistance tests were the first, well, actually the first test we did was we can listen with a stethoscope. We could hear the injector was clicking, so it was actually firing, but still doesn't guarantee of course the injector's perfect. I'll just go some pictures because this is where we find the actual issue. 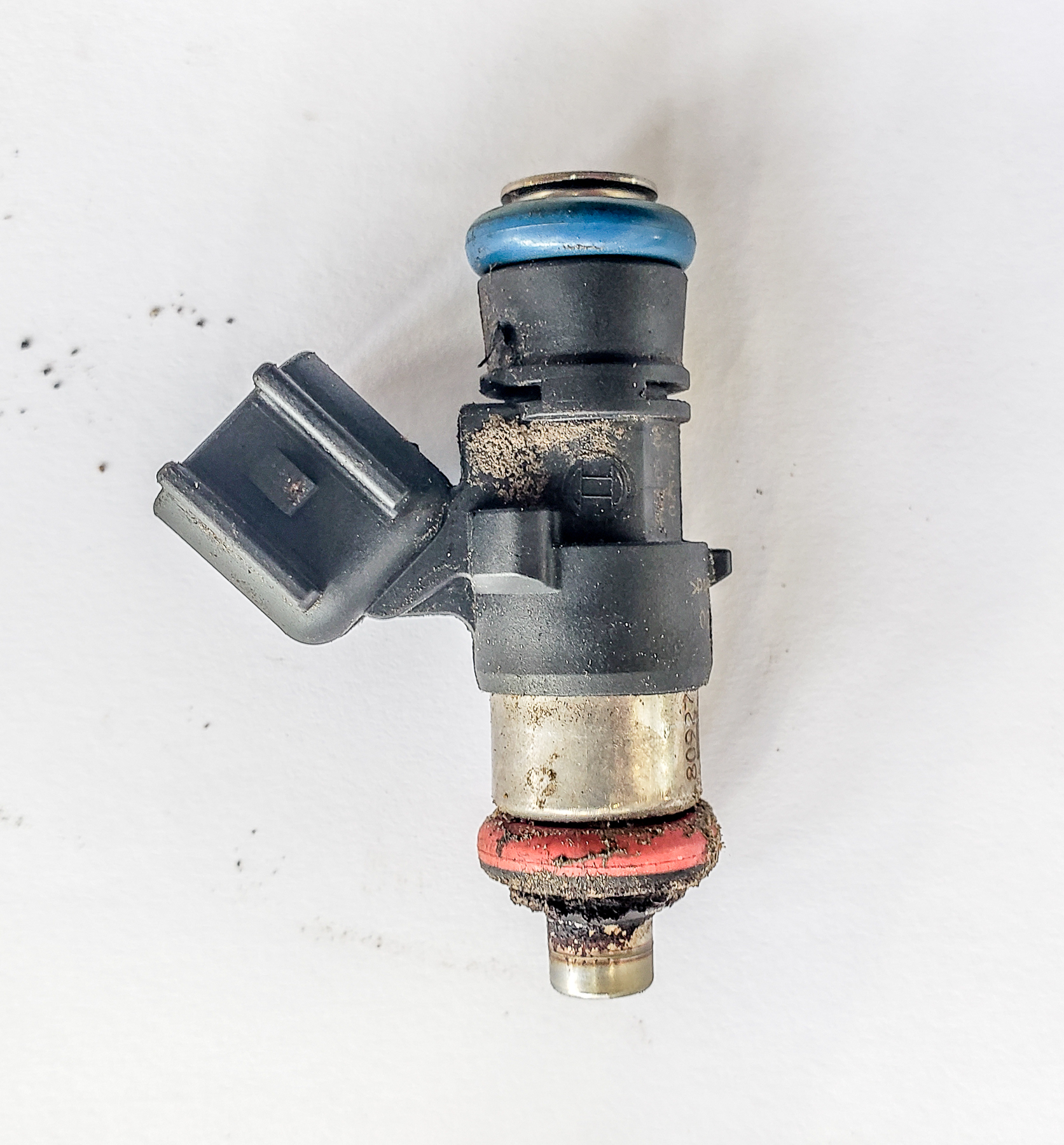 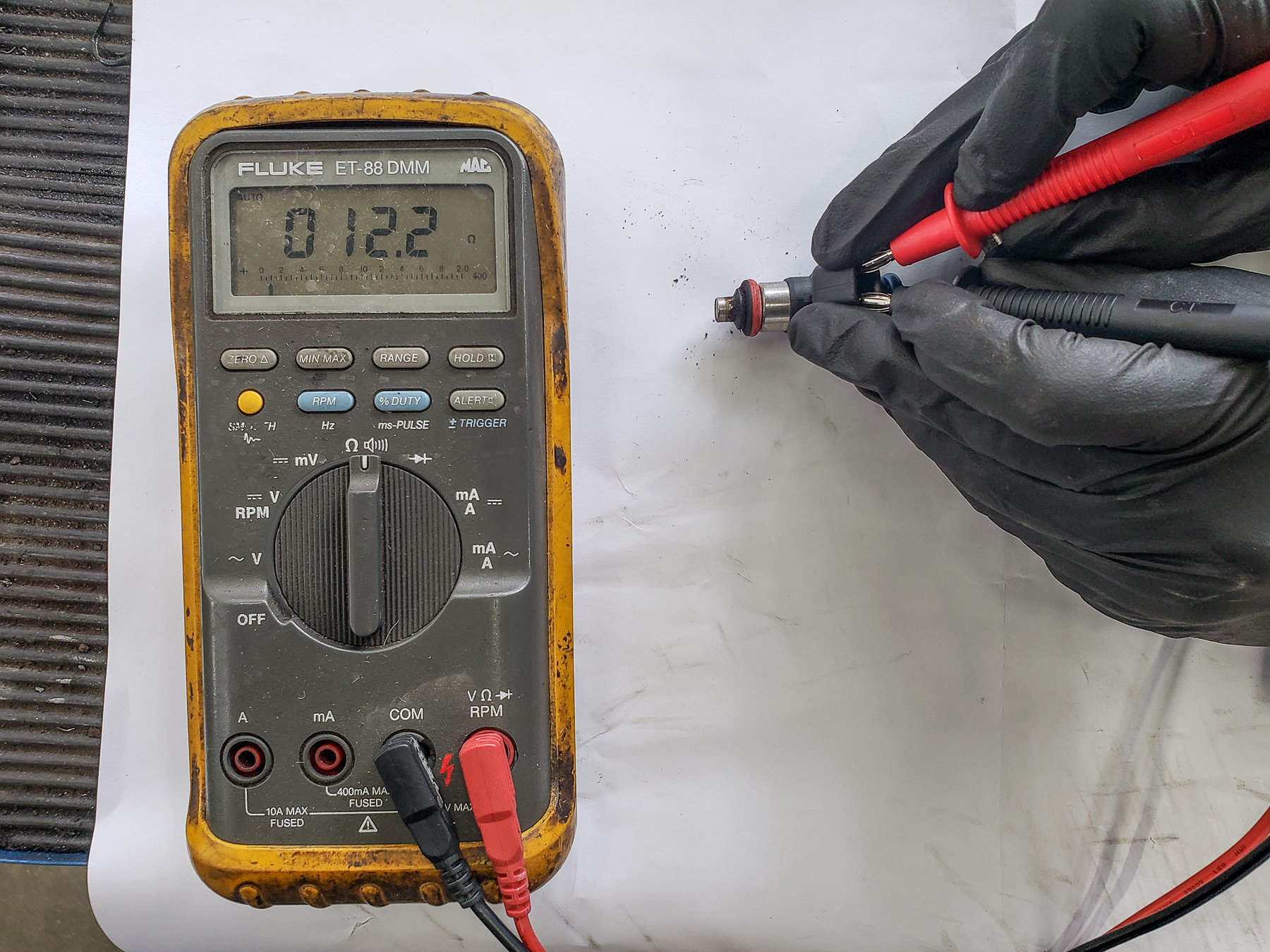 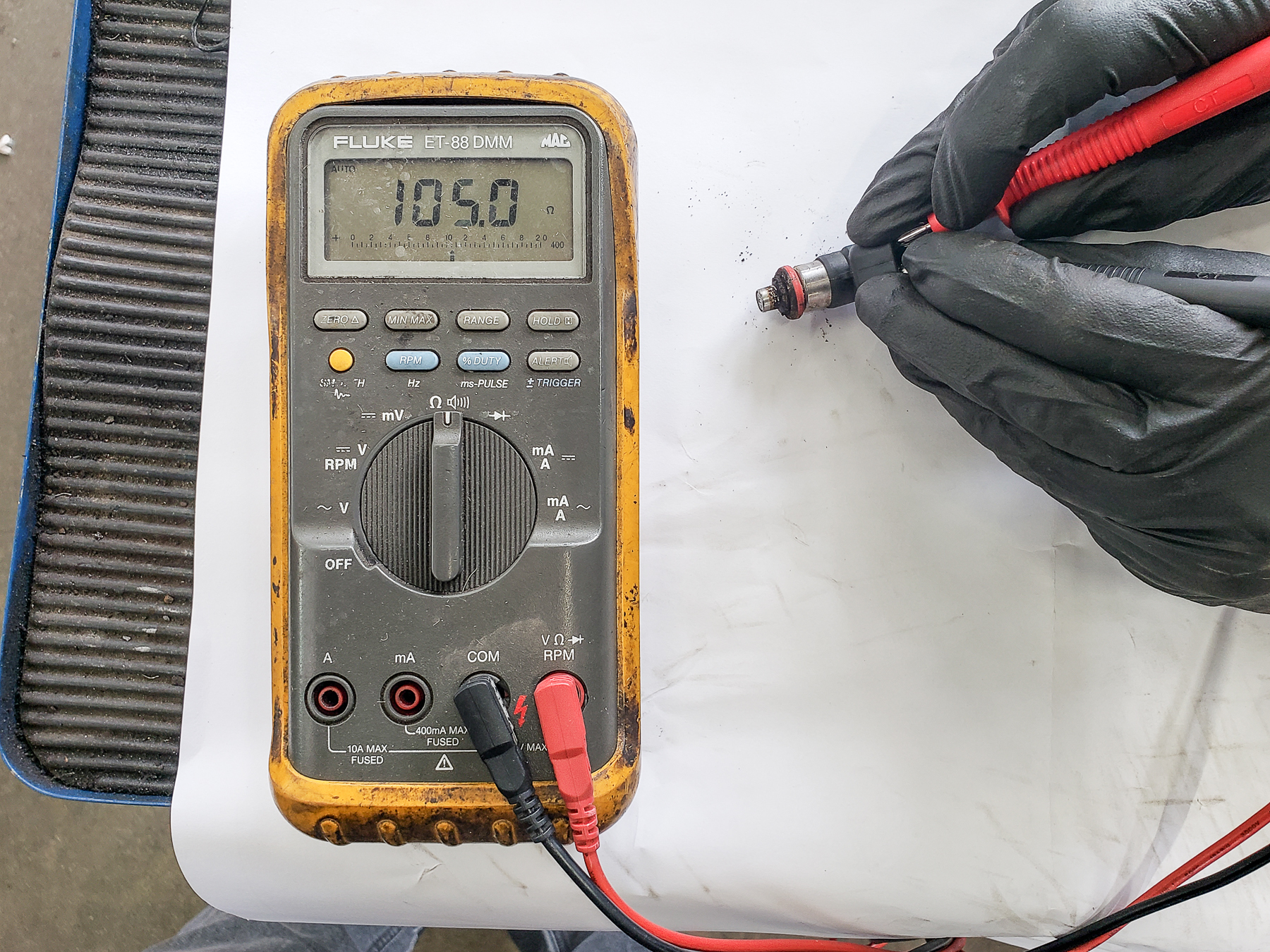 So there is our Ford Edge, 2008, 12 year old car now. Still in good shape about 180,000 kilometres, I believe on this vehicle and after we fixed it, of course ran well. There's a picture of the fuel injector. These are quite compact compared to what they used to be. Although I don't have anything, you know, size to compare it to. But just a couple of things, this is where the electrical connector hooks up. The actual fuel's injected out of this area here. So this sits in the intake manifold, and this is where the fuel rail connects up where the high pressure fuel sits. This is a port fuel injector, so it fires the fuel into the intake manifold as opposed to a direct fuel injector, which fires directly into the cylinder, which is a different technology.

So this is one of the fuel injectors. This is a tested with an ohm meter. So we're testing the resistance through the fuel injector, 12.2 ohms. That's a normal amount. I could show you the other five injectors, but we'll just go to the bad one, this is the bad one, 105 ohms. Immediately we knew there was something wrong with it. Now interestingly, when we first tested it in the car, we actually found that the resistance was only about 30 ohms, which was still three times what it was supposed to be. But, as we tested it a few more times, for taking this picture, I found that the resistance would vary from 40 to 105. Sometimes it hit 200. So clearly there was a problem. And that's what we found. So sometimes resistance tests are kind of useless, but in the case of this vehicle, this was clearly what helped us confirm our problem.

Mark: Did you fix the issue? Did you just replace one injector or did you have to do all of them?

Bernie: Well, that was the discussion we had with the client, because obviously there was only one that was bad, but the vehicle has 180,000 kilometres, it's 12 years old, one injectors died. What are the chances that the other five are going to go in the next week, month, six months a year, and this is not an entirely uncommon wear out part on this particular engine. Fuel injectors do wear out fairly commonly. So we had a discussion with the client. Here's the cost to do one here's the cost to do all six. He chose to do all six. Smart move. You know, the labor to actually change one of them is the same as changing all six, because you have to remove the whole injector rail. Remove the intake manifold remove the whole injector rail. So they all come out of the engine. It's just really a matter of do you change one, or do you change the others?

And so had he not chosen to do them because that does add a bit of cost. These are fortunately not the most expensive injectors out there, so they're reasonable, but it's still six is a lot more money than doing one. But the consequences of not doing it would be, say a month from now, the engine starts running rough again. We have to go through the whole diagnostic procedure and all the costs associated with that only to find, Oh, another injector's died and then you have to pull the whole fuel rail off. He pays the whole labor cost again to change another injector. So it just makes sense to do all of them at the same time.

But again, these things, you know, we need to evaluate, you know, as to how difficult the job is. If it's easy to just change one at a time, then you can go that route. But we found in the past, a lot of times we get an engine where one ignition coil's bad, we change one and then a few months later, the next one dies. So it's often better to do all of them, but it really depends on costs and the work involved.

Mark: So, how did it run after you completed the repairs?

Mark: And how are Ford Edges for liability?

Bernie: They're pretty good. We've got a number of clients with them from, you know, people who drive them very little, to you know, people who've got fairly high mileage on them. They seem to be pretty good overall. I mean, this is not an unexpected repair for a vehicle of this age. So overall I'd say they're pretty good. They're not a super high priced vehicle, so they're, I think a pretty good deal, but you will probably do a few more things than you would on a Toyota, but that's all as the benchmark standard. You'll probably hear me say that all the time. It's going to sickening and annoying, but not as reliable as a Toyota, but still pretty good. And generally the price point on them to buy is good.

Mark: So there you go. If you're looking for service for your Ford product in Vancouver, the guys to see are Pawlik Automotive. You can reach them at (604) 327-7112 to book your appointment. Again in Vancouver, BC, Canada. You can also check out the website, pawlikautomotive.com. Our YouTube channel Pawlik Auto Repair. On both places, hundreds and hundreds of videos, articles on all makes and models of vehicles and all kinds of repairs. Thank you for watching the podcasts and listening. We appreciate it. Leave us a review and thanks Bernie.