Mark: So Ford Edge 2008 vintage, had a transfer case problem. What was going on with this vehicle?

Bernie: So a relatively new owner to this vehicle, and one of his complaints was that there was a smell of something burning when he'd get out of the vehicle, shut the engine off, get out of the vehicle, you could smell something burning. So we did a comprehensive inspection and a maintenance service. And one thing we noticed was a fluid leak coming from the right transfer case seal directly onto the exhaust pipe which sits right underneath where the axle seal is located.

Mark: So that was what was causing the smell?

Mark: And they get hot, very hot.

Bernie: They get hot. Yeah. You know, so this is a modern engine with two catalytic converters. It's a V engine and there's a lot of heat generated in this area. So yeah, things do get very hot. So yeah, the smell was pretty prominent.

Mark: So is this just a, was it a seal problem?  How simple of a repair was it on an Edge?

Bernie: Yeah, it actually did turn out to be a pretty complicated issue. I mean, a lot of times, certain vehicles you can just pop the axle out, pop the seal out. But no it's a Ford. They made it extra complicated. These vehicles are basically, you know, they come in two and four wheel drive versions and so when they make the four wheel drive they add a transfer case, sort of bolted onto the side of the transaxle, and then the axle, the right axle shaft is kind of customized compared to what would normally be there. It's got a very long shaft on it. We'll look at pictures in a couple of minutes, but there are several seals in the transfer case. It seals the transmission fluid from getting out. It seals the transfer case fluid from getting out. There's a number of seals. So it involves actually removing the transfer case to do the repair. Pretty complex.

Mark: So this is a transverse mounted front engine on a two wheel drive?

Bernie: That's exactly what it is. Yeah. And so for the four wheel drive at just a transfer case, it's a essentially just a geared unit that transfers power back to the rear differential and a not actually a transfer case in the sense of an old four wheel drive where it would, you know, change speeds. It just diverts power, shall we say, not diverts, but moves power down the rear shaft to the rear axles.

Mark: So is there something unique about the design of the seals?

Bernie: Yes. So yeah, I did mention it was complicated. The actual seals themselves, well let's have a look at some pictures. 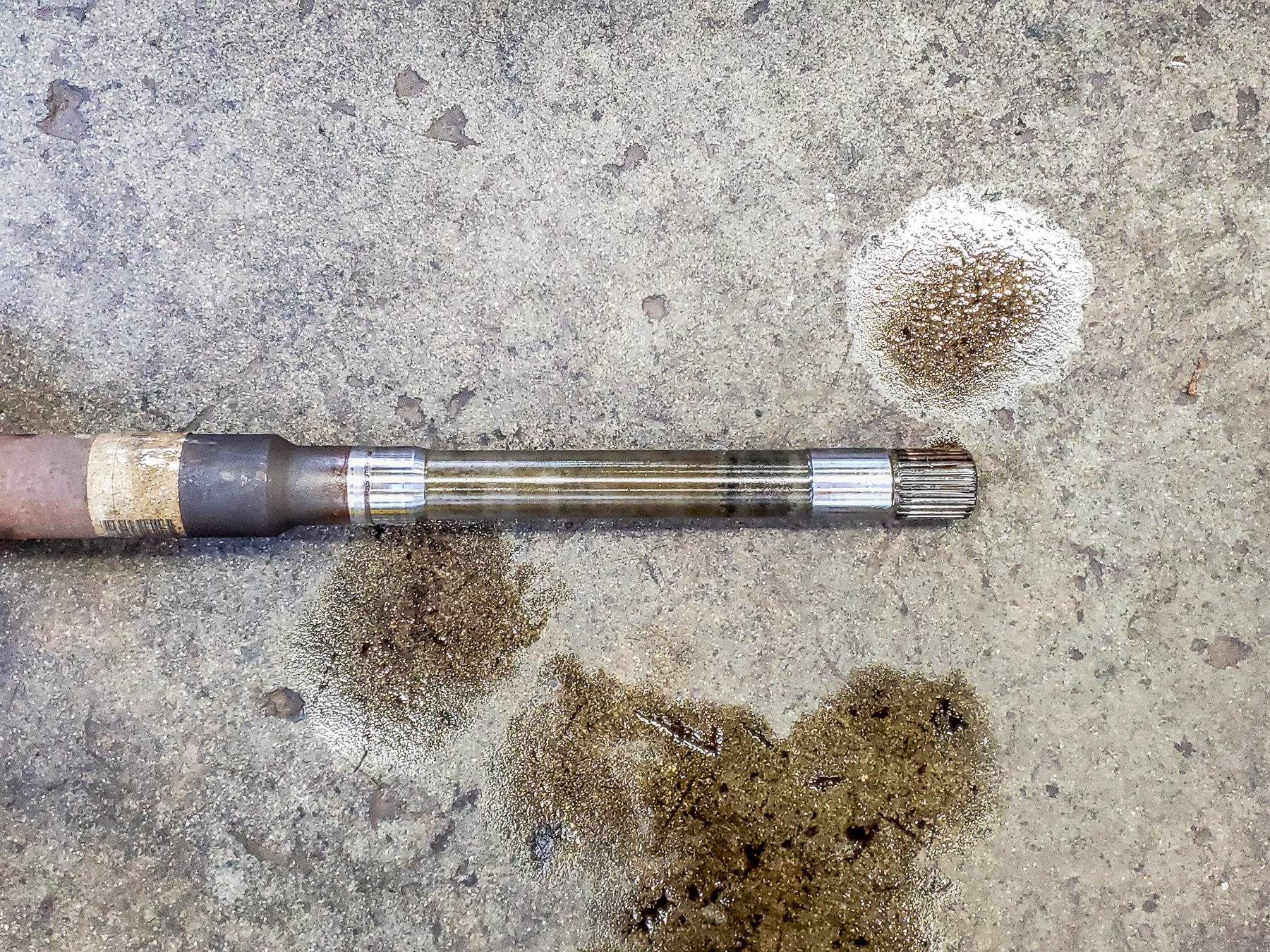 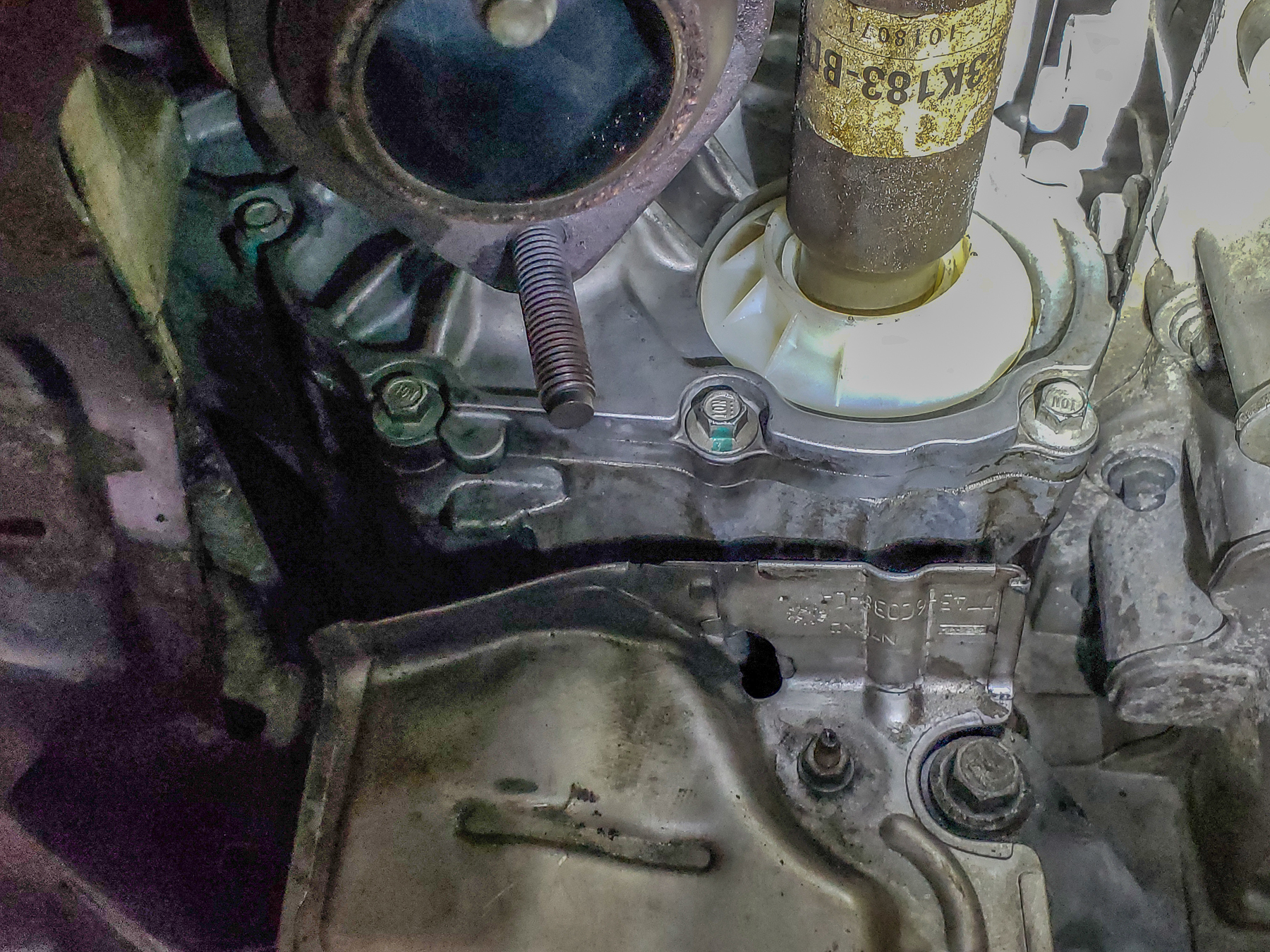 What we're looking at here, this is the right axle shaft. This basically slides through the transfer case. So the transfer case, we don't really have a ruler here, but this is probably eight inches, length from here to there. And this shaft slides right through the transfer case and right into the transmission. And you can see two very polished surfaces here. These are where the seals on both of these services. So interestingly enough, on the transfer case, there's an inner seal and an outer seal that seals transmission fluid from getting into this area. And then there's an outer seal here that that again prevents dirt from getting in and provides a final seal. And what was happening is these seals in here break down. And so the, it's actually transmission fluid is leaking all the way down the shaft and out onto the exhaust pipe. So it's extra complicated. Plus there's a number of larger seals that we're not seeing here that I don't have pictures of, but they're on the transfer case itself. So there's, I believe a total of about six seals. I don't know if they could have done it with less, but that's, that's how they built it. It's a little overly complicated.

Here's a view actually of the transfer case re-installed with a brand new seal. And again, this plastic piece is part of the special seal kit. It involves getting some special tools to put it in. And the actual shaft slides in here. So we're looking again at this little stub, this little part here is, this area right here. So you see there's a nice, you know, there's a little seal here and a little seal in there. What else can we see here? This is the rear catalytic converter outlet.

Mark: So that's an exhaust pipe?

Whenever a manufacturer finds a a consistent fault and they make a change in repair procedure. They issue a bulletin. And so there's a bulletin about this. It applies to a lot of different vehicles. There's a number of other vehicles that use this drivetrain and have this issue. So there are specific repairs, updated seal kits, and so on to deal with this.

So that's basically our picture show.

Mark: So is this a, since there's a TSB about it, is this a common leak on this vehicle?

Bernie: It is. It is a common leak, and it's, that's applicable to other models that share the same drivetrain. I don't have the TSB in front of me. I remember seeing the word Taurus on there. So Taurus, Edge, whatever other vehicles use this particular drivetrain are similarly affected and similar repairs.

Mark: So there's a couple of other questions that we didn't actually talk about prior to this. So hopefully that doesn't take you too far off track. So the transmission fluid was actually leaking into the transfer case, were the fluids, different fluids mixing. And is that a problem?

Bernie: Well, it is a problem for fluids to mix because they put specific types of fluids, like the transfer case has gear oil and the transmission uses a synthetic transmission fluid. So there are different types of fluids. Sometimes it, you know, usually it does make a difference because there's a reason why they use different kinds of fluids. And sometimes it could be, it could be catastrophic. In this case, I'm not certain, but the answer is there wasn't really any mixing of the fluids because the way it's designed, it could mix because there are several sealed areas. But the way this fluid was leaking, it was just leaking straight out that axle shaft and out into the exterior environment. So in this case, it wasn't mixing, but it can happen. And it does happen. Many vehicles, sorry?

Mark: So there's like a tube that that axle shaft is running through.

Bernie: That's exactly right because it runs right through a tube, in the transfer case.

Mark: Okay and with the Edge it's, like a large SUV, slash station wagon, I don't know what, it's Edgy.

Bernie: Yeah. That's called a compact SUV actually. It's not, it's not huge. It's more of a car, kinda like a BMW X3 is to a BMW 3 Series. It's kind of a compact SUV.

Mark: And so is having a transverse mounted V engine in one of those is fairly rare, is that right?Or is that a more common thing?

Mark: And the reason why they went that way instead of the normal way or what I'm used to being an old guy.

Bernie: Yeah. Not well, because it's, they start off with a front wheel drive configuration first.

So that's kind of how it, so it's a two wheel drive vehicle first, and then they just added on. But I'm thinking like vehicles like Dodge Caravans, I mean they've gone that route for a long time as well. It's a front wheel drive, transverse mounted engine. Let's throw on a, Volvo calls at an angle gear unit, and that's kind of like a good term for it because it just basically changes the angle of the drive from this direction to this direction.

Mark: Right? So how are Ford Edges for reliability?

Bernie: Kind of Edgy. No, I'm just joking here. But they're fair. We don't work on a ton of them in our shop. There wasn't a lot else wrong with this particular Edge and it had about 187, a hundred, 180,000 K range. So this was really the only major problem we found with it. Actually come to think of it, the shocks were leaking in the back brakes, but you know, that's a lot of kilometres in the vehicles, you know, 10, 12 years old at this point. So not, not unacceptable kind of wear, but they're overall pretty fair vehicles. But you know, again, you know, this transfer case issue, that's something you're going to be facing. And fortunately this owner just bought the vehicle and he had an extended warranty on it. So it covered most of the cost of his repair on this particular job. So that was a good thing for him.

Mark: So there we go. If you're looking for service for your Ford product, Edgy are not in Vancouver. The guys to see are Pawlik Automotive. You can reach them at (604) 327-7112 to book your appointment. You have to call and book ahead. For those folks who reach out from all across North America and even sometimes the world, we don't really provide free consultations. So this is a local service in the Vancouver, British Columbia area in Canada, and we appreciate you respecting that. As far as, anything else, we love that you take a look at the website, pawlikautomotive.com. Check out the YouTube channel, Pawlik Auto Repair. And of course, thanks so much for listening to the podcast. We appreciate it. Feel free to subscribe and leave us a review. Thanks, Bernie.

Bernie: Thanks. Thanks Mark, and thanks for watching. We absolutely appreciate it.