Mark: Hi, it's Mark from Remarkable Speaking. I'm here with Mr. Bernie Pawlik, Pawlik Automotive in Vancouver, Vancouver's best auto service experience. And I can say that cuz they've been voted best in Vancouver by their customers, 24 times. We're talking cars. How you doing Bernie?

Mark: So today's victim is a 2008 Infiniti EX35. What was going on with this vehicle?

Bernie: Yeah, so this vehicle arrived at our shop and I think it was probably towed in, but it would barely move. Started up, try to move it around the parking lot. It would buck and kick and pop and had very distinct lack of power. We were able to move it around in and out of the shop, but I'm not sure if the it was actually driven to the shop. It ran very poorly.

Mark: So in that case, what sort of testing and diagnosis can you even do?

Bernie: Well, the first thing is hook up a scan tool, scan the vehicle, see what trouble codes are stored in the vehicle. And we found a code of P0014, which is an exhaust cam timing advanced I think is the description of the code exhaust cam timing advanced bank one. So that gave us a direction of where to go with our repair. At least that that was the only code that was there.

Mark: And how does that translate into the engine running so poorly?

Mark: So is then the next step, okay, let's just replace all the camshaft parts.

Bernie: Yeah. No. Okay. Excellent point. Because a lot of people think, oh yeah, you just plug it in and the computer tells you what to do. Well, it, you know, sometimes it kind of does, but for the most part, it just gives you a direction of where the issue lies.

And so from there, we have to get other diagnostic equipment. We have to follow flow charts, we have to test things, we have to gather information, and that's where, you know, people wonder, well, why am I paying for diagnosis? Why don't you do it for free and then charge me for the repair? Well, it's like part of the job. It takes time. It's like when you go to a doctor, it's like, is that pain in your chest, a heart pain or a, a bruised rib? It would be good to know before you cut the chest open and do heart surgery.

So we do testing and so what we found from the testing is that there's a magnetic actuator. There's a cover that goes on the engine. We'll have a look at pictures in a minute that we did some resistance testing and the resistance of this component was had an open circuit. So that was a pretty clear indication that that was a problem. Also, we have a database of repair information and a lot of sources depending on the car we work on. And this particular code indicated that this part was a particularly common part and you know, I gotta look it up cuz it's got such an unusual name.

So let's just get into some pictures here. So this is the front of the engine. This is the magnetic retard mechanism front plate removed. Also, there's an actuator for the intake cam, so this is the exhaust cam here, and you can see sort of a metallic type of plate here. I believe also, this is a spring in the back here, but I didn't really look super closely, and I tried to get some, thought after the fact and the car's been gone. Hey, how does this system actually work? Because it's kind of unusual. Most vehicles for variable valve timing, use a system like the intake. I'm kind of swirling my most pointer around here. If you're watching this. 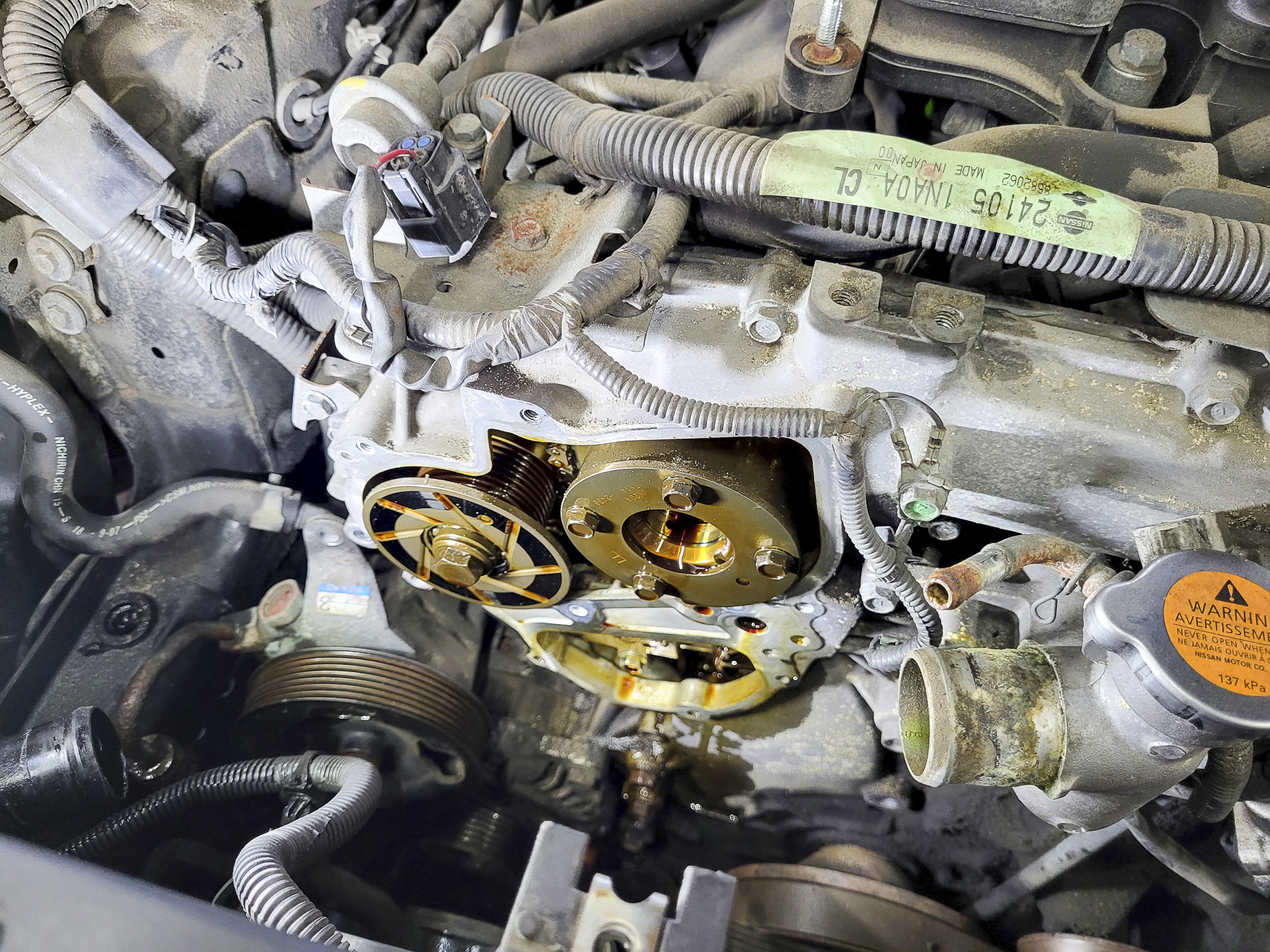 Inside here there's a solenoid and a gear that operates with oil pressure. So for some reason they do it on the intake but not on the exhaust side. And I don't know why and I wasn't able to find any information on that. I would love to know cause it's kind of interesting. 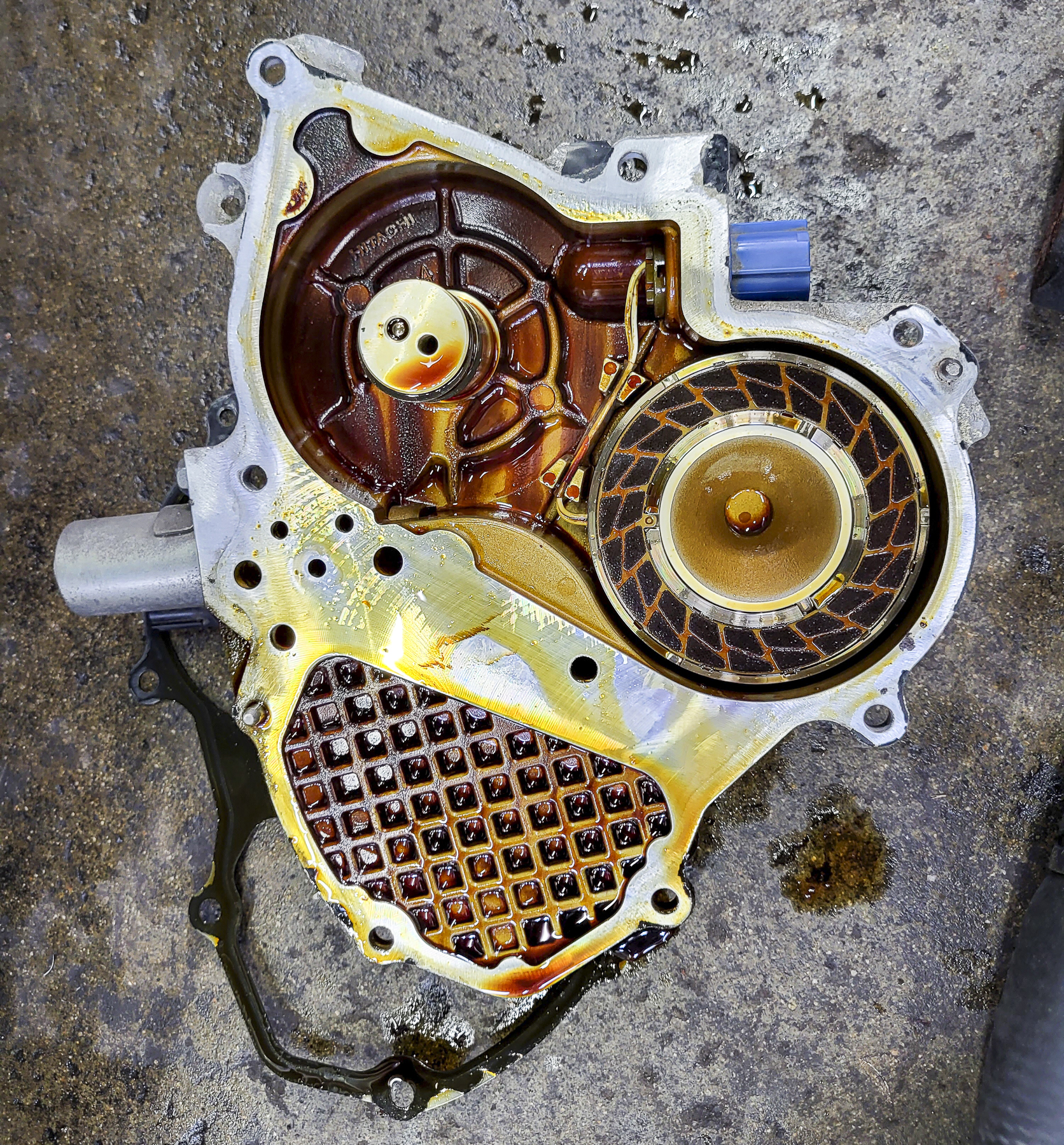 And you can see a blue wiring connector. This is where the electrical connector goes. As I said, we tested this with an O meter and it was an open circuit, so that's a pretty good indication. That means the part's bad for sure, but sometimes it can Om out and test properly and still be defective.

So it was nice that we had that verification signal. But somehow as this is actuated by the powertrain computer, this will adjust the valve timing. It'll retard it to a certain amount, so it'll pulse the magnet, and that creates a change in the valve timing on the exhaust side of the engine.

I mentioned the intake. So this is basically where the oil is pressure fed into that gear on the intake side. So there's a solenoid. Again, I'm moving my mouse pointer around here. This is for the intake side, and there's a lot of little ports and items here. Some of these are bolt holes, but others of these are ports that have oil pressure activated.

So as we've said 'em many times in the podcast, change your oil regularly. Many cars have long oil change intervals, but you don't want to go that long. Because any of these things get plugged up, and some of these passageways are really small. They're way smaller than what you're seeing here. Some of 'em have little tiny filter screens. Any sludge that builds up will cause valve timing problems. So it really is important on a modern engine to change your oil frequently. Not as frequently as an olden days, because oils are better quality, but you need to change 'em regularly. You don't want 'em to get too old.

So we replaced the unit and that was kind of it.

Mark: So there's two of these on the car, is that right?

And incidentally, this one was the difficult one to replace. There's a lot of bracketry and things in the way that we had to remove. The one on the left side is quite easy to replace because the plate just sits there, you can pop it off and it would be a fairly quick replacement. But this one is much more time consuming.

Mark: So this magnetic retard mechanism, which is essentially changing when the valves open and close, this is all, it gets really complicated, I'm sure when the spark plug's firing, when the air fuel mixture's coming up in the piston, blah, blah, blah, to try and get better power and better mileage out of the vehicle, but less emissions, essentially.

Bernie: Exactly. It's all around that. There's three things. Horsepower, fuel, economy and emissions. And so all of these things kind of work together. And that's what's amazing about modern cars is how much power you can, I remember looking at somewhere, it may not be for this engine, but you know, it's like 330 horsepower at about 3.5 litre V6. It's pretty good, you know, when you think about what a 3.5 litre V6 would've done in the 1980s, you know, maybe 150, 200, if you have a performance model engine. And the emissions are lower and the fuel economy's better. So, you know, it just works pretty well. But when it comes to fixing things, of course it makes, it makes it much more complicated and more expensive.

Mark: So I guess I was gonna ask, this magnetic version of a variable valve timing, is this pretty unique?

Bernie: You know what, I've not seen it on any other engine and I don't look at every technology and every thing, but it does seem kind of unique to me. And as I said, I was trying to do a little research on it and try to get some, you know, Googled it and searched it and I couldn't find anything anywhere. So, I mean, I know if I dug deeper I'd be able to find something, but I wasn't really able to find anything about it. So you happen to be watching this podcast and, you know, we don't always monitor all our notes, but if you have some information, send it in cuz I'd be curious to know a little more.

Mark: So once you had everything replaced, was there additional reprogramming or any other adjustments that needed to be made after you replaced the part?

Bernie: Yeah. No reprogramming, but there is a relearn procedure, so the computer gets used to, you know, how the vehicle's been operating. And so Jordan our technician, who worked on the vehicle, went out to drive it before he did the relearn. And it, you know, it would run okay, but then it would buck and kick and do a couple weird things. I mean, it ran pretty near normally, but not perfectly.

So performed the relearn procedure. It's done through a scan tool on a computer. There's a procedure to do. Once that was done, it ran like a brand new car.

Mark: So you said you'd done some searching and research on it. How common an issue is this for this version of Infiniti?

Bernie: It is actually a pretty common issue. One of our repair databases, it's a technician only subscription type database. When we have a certain trouble code or issue with vehicle, we can type it in and it'll come up with how often the problem occurs. In some cars we get no information. On other cars we get lots of, and this was a very common problem actually. It's neat with data, with modern data because, you know, this program will actually list, these are the top five trouble codes for this vehicle, and actually this turned out to be number one.

So if you happen to have an in Infiniti, or there are some other models of vehicles that use these. Nissans, you know, in the 350Z, in the Maxima, the higher end models, if you have one and it's running really rough, chances are it could be this problem.

Mark: How are these Infiniti EX35s for reliability?

Bernie: Yeah, they're good vehicles. I mean, I think Nissans are quite well built vehicles, not too problematic, pretty reliable. You know, being a fancier car though, they have these kind of features will occasionally go wrong and cost you more money than a basic kind of car. But overall, it's a good vehicle, nicely built, probably more reliable than a European equivalent model. And nice to drive too.

Ooh, I like European cars too. If, yeah. You own a few of them. Yeah. Yeah, I do. Yeah. Well, glutton for punishment. Mercedes, Porsche, BMW in fact, you own 'em all almost. Yeah. Don't have an Audi or Volkswagen, but you know.

Mark: So if you need repairs for your Nissan or Infiniti in Vancouver, you've got one of these V6 Humdinger engines and you're having some issues. The guys to see are Pawlik Automotive. You can reach them at their website to book online at pawlikautomotive.com. Or you can call them to book (604) 327-7112. Thanks very much for watching and listening. We really appreciate it. Thanks, Bernie.

Bernie: Thanks, Mark. Thanks for watching. Always a pleasure and it's fun.