Clutch replacement on a 2008 Jeep Patriot North Edition is our latest featured post, brought to us by a client from Champlain Heights, Vancouver.

After 6 years and almost 90,000 kilometers, the clutch in this 2008 Jeep Patriot failed suddenly: the pedal flopping around under foot, offering no resistance when pushed and unable to activate the clutch.

To address the concern we removed the transmission from the vehicle and found, as we suspected, that the clutch slave cylinder/release bearing assembly had failed. We also closely inspected the clutch disc and pressure plate for wear.

What we found was interesting. We could not disassemble the clutch: the pressure plate, clutch disc and flywheel were all riveted together and serviced as an assembly: a modular unit, so to speak.

This is a very unusual setup and something that we’d never seen before. It also explained why the only place that we could buy the clutch parts from was from the Chrysler dealer, making this an unfortunately pricy repair.

In examining the clutch assembly from a manufacturer’s point of view it kind of makes sense. This Jeep Patriot has a ring gear/flywheel identical to one found on an automatic transmission model and I’d bet that they figured it’s be easier to build the vehicles in this way. The standard transmission equipped Patriot is very rare.

These days we see a lot of clutches failing long before the disc wears out. In the past the clutch disc was the major wear out part of the clutch assembly. Now many times we see slave cylinders fail. These are often integrated with the release bearing and collar to form a unitized assembly. Unfortunately, once they fail you may as well replace all parts because they are already half worn out.

For more information on the Jeep Patriot click this link http://en.wikipedia.org/wiki/Jeep_Patriot

New and old clutch ‘modules’. The yellow arrows point to the rivets that hold the assembly together. In every other clutch we have ever worked on these are bolts. As this clutch can’t be taken apart one way to assess wear is by looking at the pressure plate finger position. The red arrows point to them. If you look carefully at the new unit you will see that they sit lower than the ones on the right. It’s subtle and much more noticeable in real life. The unit on the right is quite worn, though it’s impossible to say how much life it had left. 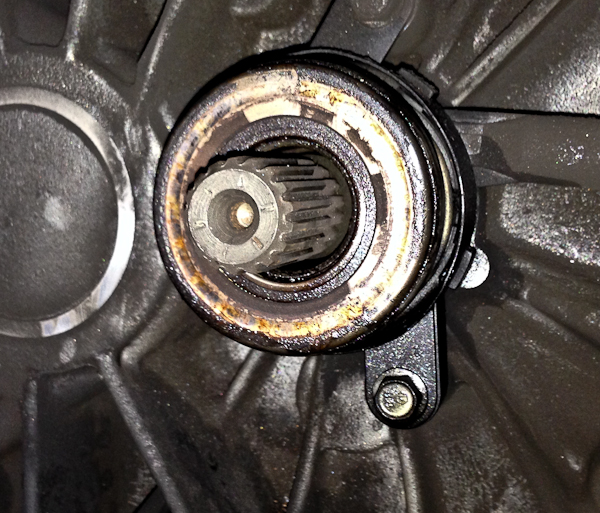