Mark: 2008 Mercedes diesel. Bluetec. What was going on with this vehicle?

Bernie: So the owner brought the vehicle to our shop, there was a vibration and a noise going on in the front end of the vehicle. He was concerned about. Plus the battery was weak which we replaced, but the front end sort of noise and vibration was a concern.

Mark: So how do you go about diagnosing and finding out what was going on?

Bernie: Well, the first place to start is with a road test. And we did that. Technician already looked at it, did the diagnosis, but I took the car for driving myself. And immediately I noticed, as soon as you put it into drive or reverse, there's this horrible vibration in the vehicle. And once I feel that, indicates a worn out engine or transmission mount or something vibrating from the engine to the frame of the vehicle.

Mark: Is that a typical way that you would diagnose that?

Bernie: Well, that's kind of a right away, going hmm. I think that's where the problem lies is an engine mount or transmission mount. So there are ways to diagnose it. So visual inspection of the engine and transmission mounts would be the next step. There's a way we can test it. So what you do is you basically have one person look under the hood. You load the engine up, so you put it in drive, put your left foot on the brake, right foot accelerator. So you're actually loading the engine and it'll twist the engine.

Different direction in forward and reverse. And you can see whether the engine moves. And so we could see very excessive movement when we did that test. Sometimes it only do it and drive, sometimes it only do it in reverse. If a mount's broken bad enough, the engine will actually jump several inches up in the engine compartment, which is not good. But you know, we know we found our problem. So there's definitely excessive play in these mounts. Very clear and noticeable.

Bernie: Yeah, so typically they're rubber, but these are a little more complex and we'll show some pictures in a sec, but what can wear out, I mean, a typical old fashioned engine mount was two pieces of steel with a stud or bolt holes on each end.

One end would bolt to the frame of the vehicle. The other would bolt to the engine and there'll be a big piece of rubber cushion in between. They've got a lot more sophisticated. Some of them use electromagnetics to dampen vibrations. Others like these Mercedes, fill the mounts with oil as a cushioning. It's kind of like a shock absorber. So there's more complexity to them.

And in the olden days, the mounts, if they were to break, they just jump around and move around. But a lot of times they put a little anchor pieces on the mount, so they don't quite come apart like they used to in the old days. Like in the sixties or seventies and earlier when cars were a lot cruder.

Let's have a look at some pictures. So there's our Mercedes. 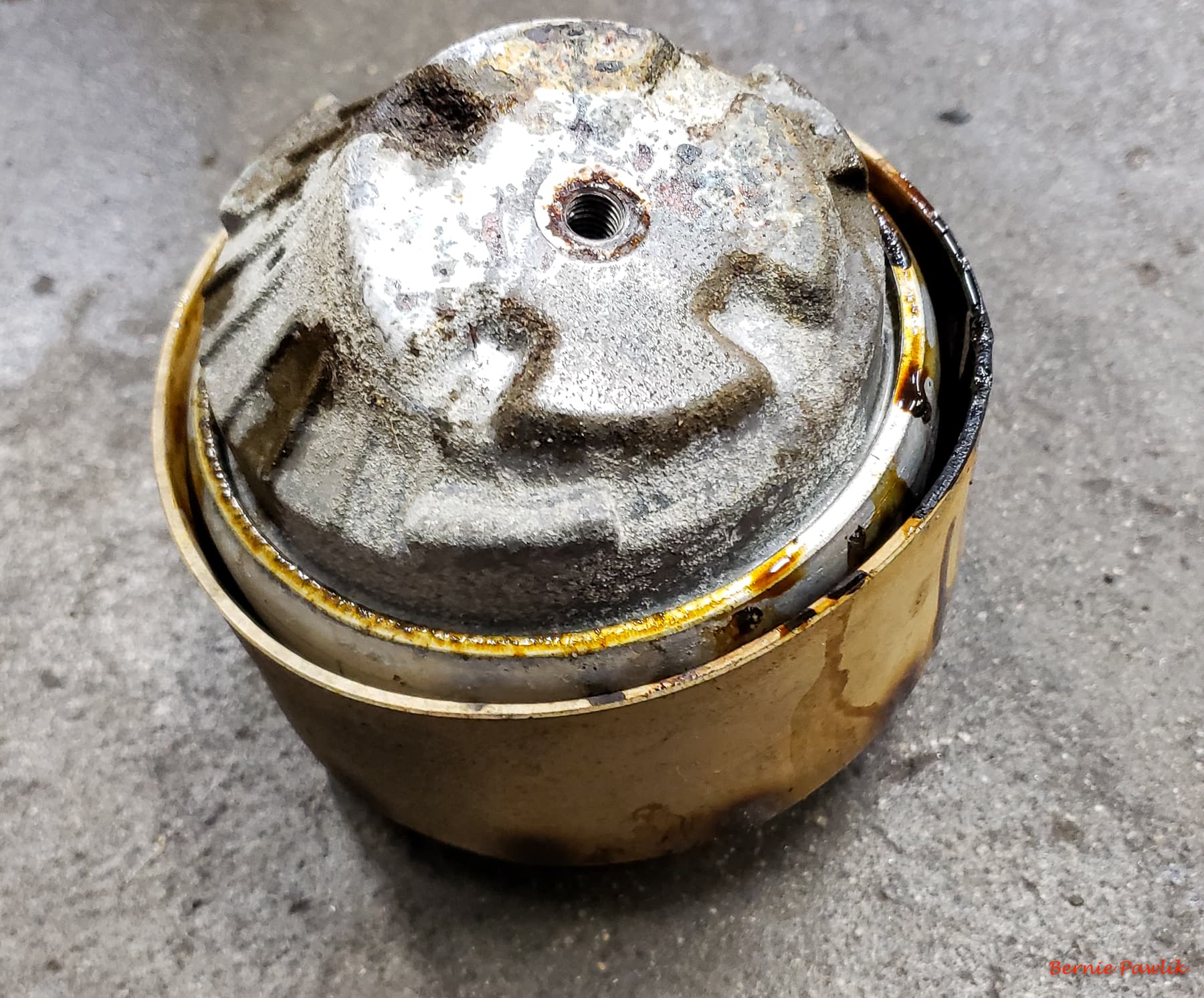 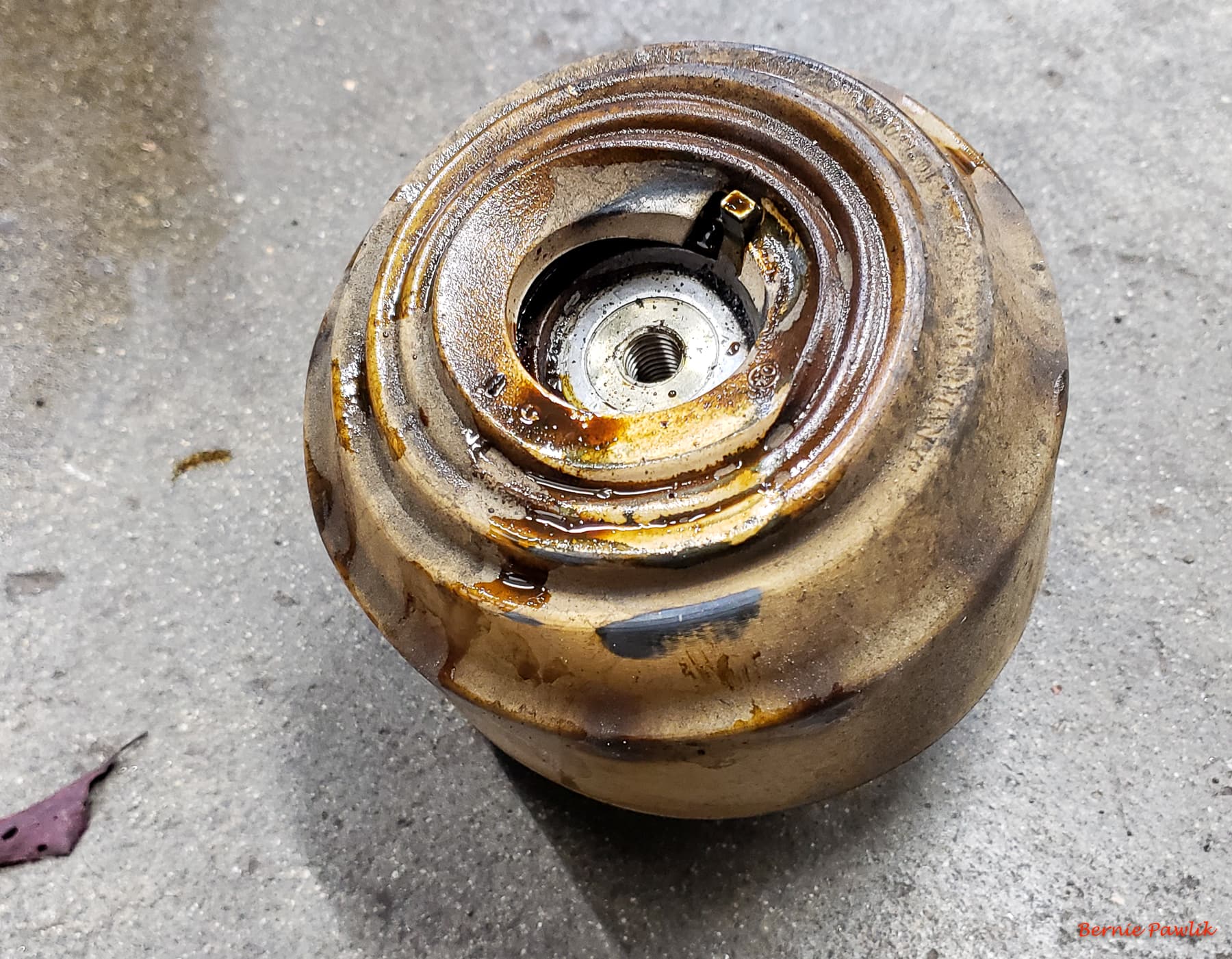 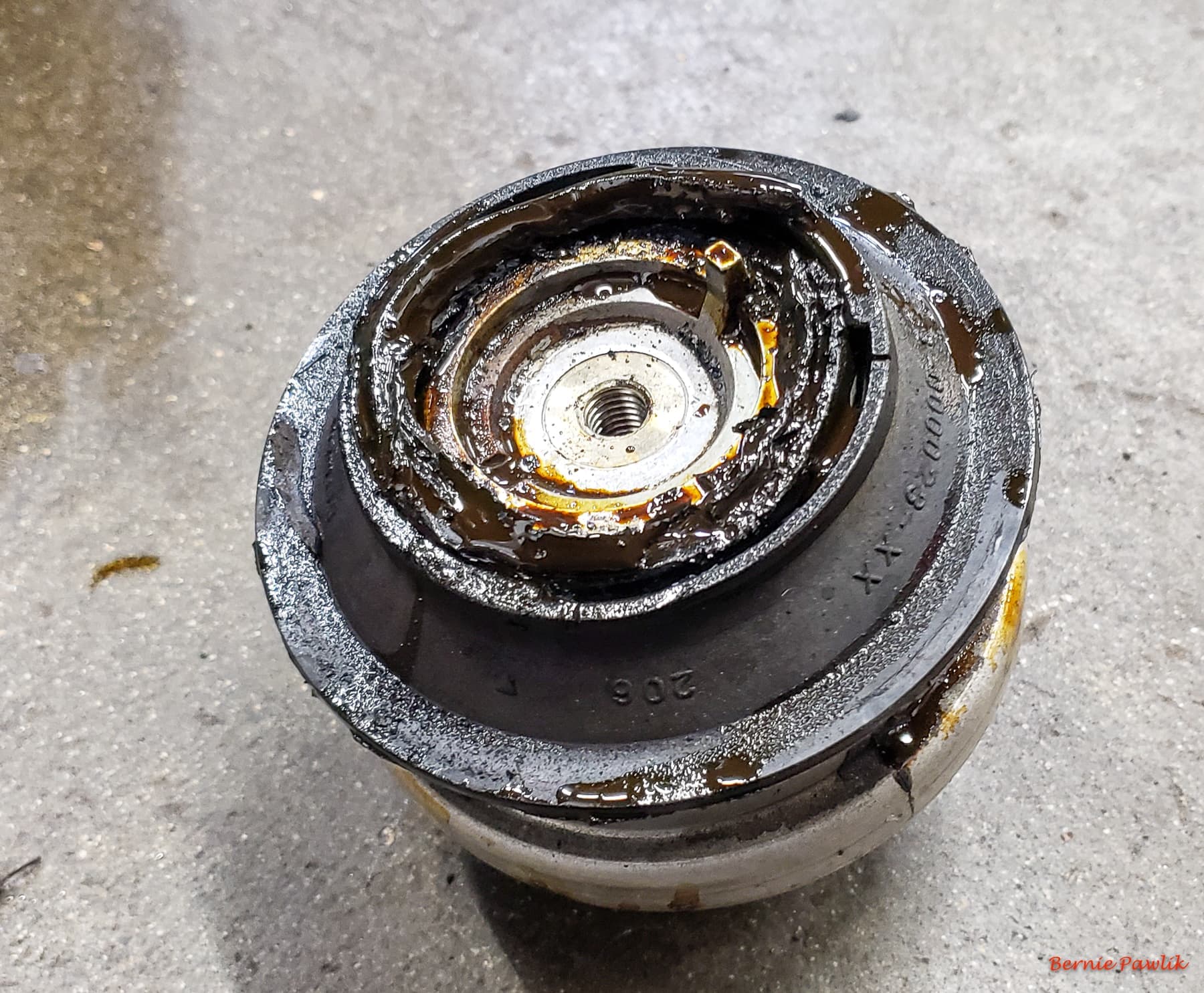 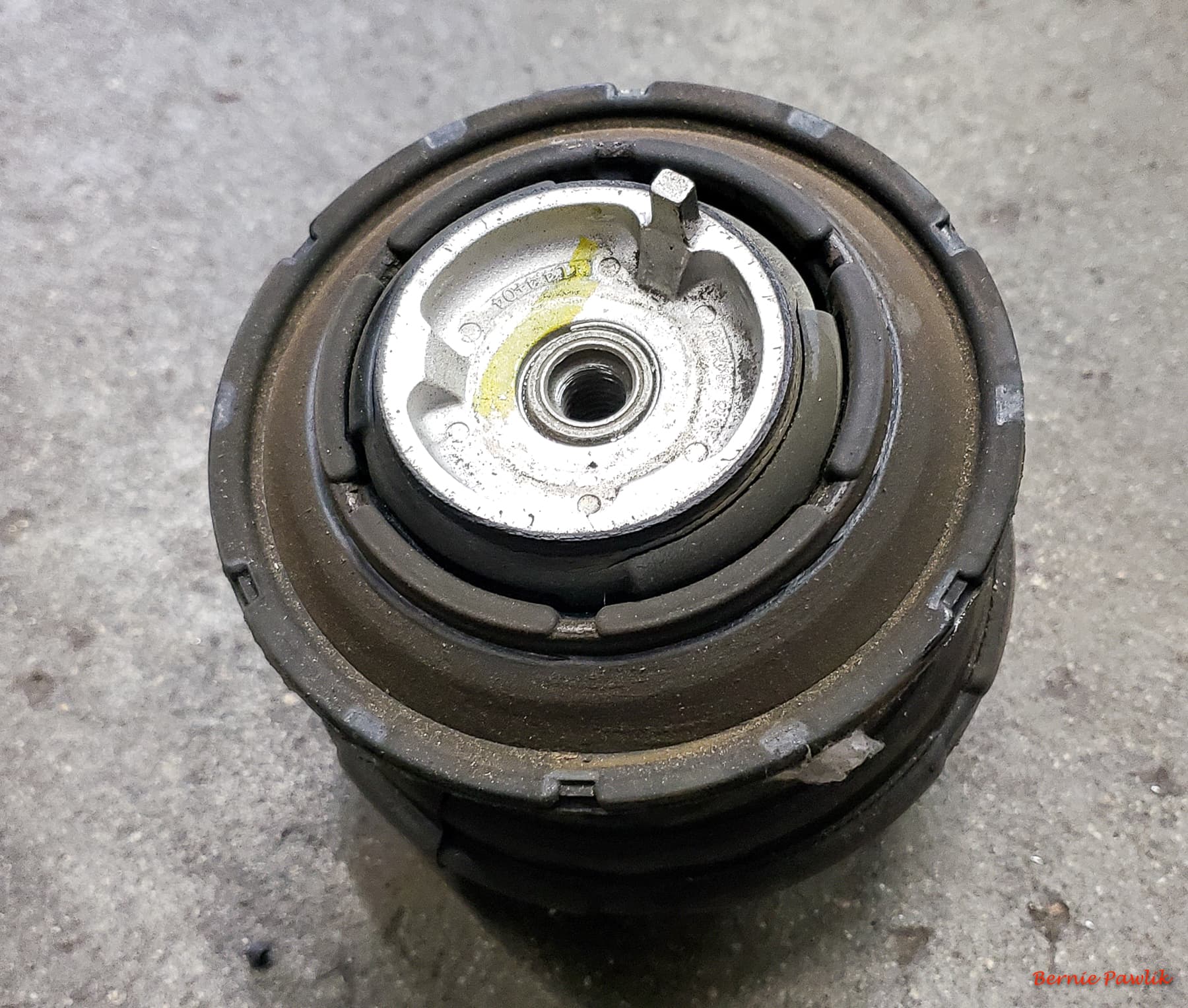 So there's one of our old worn out mounts. So the mount on the left side was actually leaking oil out of the mount. I've just got pictures of old mounts to look at here. There's another view of the mount . You can see a lot of fluid that's leaked out of it. And sometimes you see that in the car and other times you don't actually see it until we actually unbolt the mount and then it all kind of falls apart.

There's a view of the mount with that rubber sort of sleeve or covering sleeve off it. You can see all the oil that's leaked out and the rubber's not in very good shape on this one either. And then finally, this is a mount on the right-hand side of the engine, which wasn't leaking oil. You can see the rubber is kind of a little cracked, not broken, but this mount may have been okay to leave.

But when we change it, we always do them in pairs. It's often best to change them all because if one's worn, the other one will have taken strain or is going to wear out sooner than later. So that's kind of the best thing to do in that case. But again you can see now, all the oil it's leaked out in this mount. And even the the metal isn't sitting properly in comparison to the, it's actually collapsed here. But once you put some load and torque on it, this mount will just jump around.

Mark: So what kind of engine configuration is this, a V6, V8?

Mark: So you mentioned the transmission shock absorber mount or whatever. Do you have to change that typically when you change the engine mounts?

Bernie: No, not always. Not in this configuration. It's a little different. When you have your transverse mounted engine is the sideways, I call them sideways mounted engines, a lot of times it's best to change all the mounts in those because the transmissions are twisting back and forth all together.

Mark: So how labor intensive a job is this?

Bernie: Yeah, it's a bit of a pain on this one. You know, they wedge things in pretty tight on this particular vehicle. So it was pretty labor intensive to change the mounts.

A lot of times it seems like not a very difficult job on a longitudinally mounted engine, but they're getting to be worse and worse the way they shoehorn things in. So took awhile.

Mark: And how did the car drive after all the mounts were replaced?

Mark: So this is a 2008. How are these Bluetec diesels for reliability?

Bernie: Well, this is the same diesel you find in a Sprinter van or in the MLs and GLs that we talk so much about. They're kind of along the same level of issues. Oil leaks and the like. Maybe a little less stress in the car than there is in the SUV's and truck models.

So they might be a little more durable, but they're still the same kind of concerns. And again, you know, as we've talked about a lot with diesel, you need to warm them up. You need to drive them. So if they're just little grocery getters and your grocery store's a kilometre from your house, that's not a good thing. You should be out to be out driving it, getting it nice and warm.

Bernie: And change the oil absolutely.

Mark: Do not miss.

Bernie: Do not miss it and change it once a year. Even if you don't drive it a lot. It's really important.

Mark: So, if you're looking for service for your diesel vehicle in Vancouver, the guys to see are Pawlik Automotive or your Mercedes they're experts in it. You can reach them on their website pawlikautomotive.com. You can actually book on there. They'll call you. They'll get everything set up for you when you come in for your appointment, or you can call them at (604) 327-7112. You have to call or book ahead, you gotta, they're busy. Check out the website.

Like I said, thousands, not exaggerating over a thousand articles on there on all makes and models and types of repairs. We've been doing this for over 10 years. Or the YouTube channel. Pawlik Auto Repair. Same story. Videos, we've pontificated about many things for a long time only cars though. And only cars.

Yes. And of course as always, we really appreciate you watching and listening. Thanks Bernie.

Thank you, Mark. Thanks for watching.