Bernie: Yeah. So this vehicle was brought to us. It had a number of lights on, on the dash. Primarily the ABS light was the biggest concern. He'd actually taken it to another shop to have it scanned and diagnosed and repaired. But they, well, we can talk about this one later, but to make a long story short, it was at our shop too to be looked at. So we scanned the vehicle and found some interesting stuff.

Mark: So, is there any other diagnosis that you had to do after scanning it?

Bernie: We did. For sure. So, part of the procedure of course is to, with any diagnostic is to road test the vehicle. We did that the vehicle drove fine. You know, the thing about ABS lights to know is that when usually when an ABS warning comes on, it doesn't usually affect your braking system, because your base breaking system works as normal. It's just the ABS features, you know, that sort of antilock feel. If you've ever pressed the pedal hard and it, you feel the pedal vibrate, that will be shut off. In the features of antilock braking, which, you know, prevent the wheels from skidding, won't happen.

So you've got your basic brakes, but anyways vehicle drove fine. We found quite a few trouble codes starting the vehicle, but all of them pointed to the left rear wheel speed sensor. And there was all sorts of different descriptions for the codes. Mercedes are very detailed in a lot of their code descriptions and tests that they do on these things.

So there was even one that said perform visual inspection on censor, which I thought was kind of an interesting code description. So clearly we knew where the area of the problem was. And so our next step of our tests and unfortunately I have a video I really wanted to show. Maybe we'll maybe we'll be able to put it in with the with the final podcast, but it's not here available today, but we were able to look at each wheel speed sensor when we drive the car and compare how each centre’s operating.

So the interesting thing I noticed right away, so it has, you know, each wheel speed sensor and you would expect as you're driving down the road to have a reading of it. You're going like five kilometres an hour, five miles an hour. However it is. And they should all be relatively the same. Well, the interesting thing was as I went to that screen with the vehicle sitting in park and the engine running, you can see the left rear wheel speed sensor was, every wheel speed sensor said 0.7 of mile per hour. For some reason, I guess that's the default number when you're not moving. The left  wheel speed sensor would start reading 3, 4, 10 miles an hour without the vehicle even moving. So clearly we knew there was a problem in that area of the computer or the sensor.

Mark: So you've found the bad sensor. Do you just change a sensor or are there any more tests that you do after that? 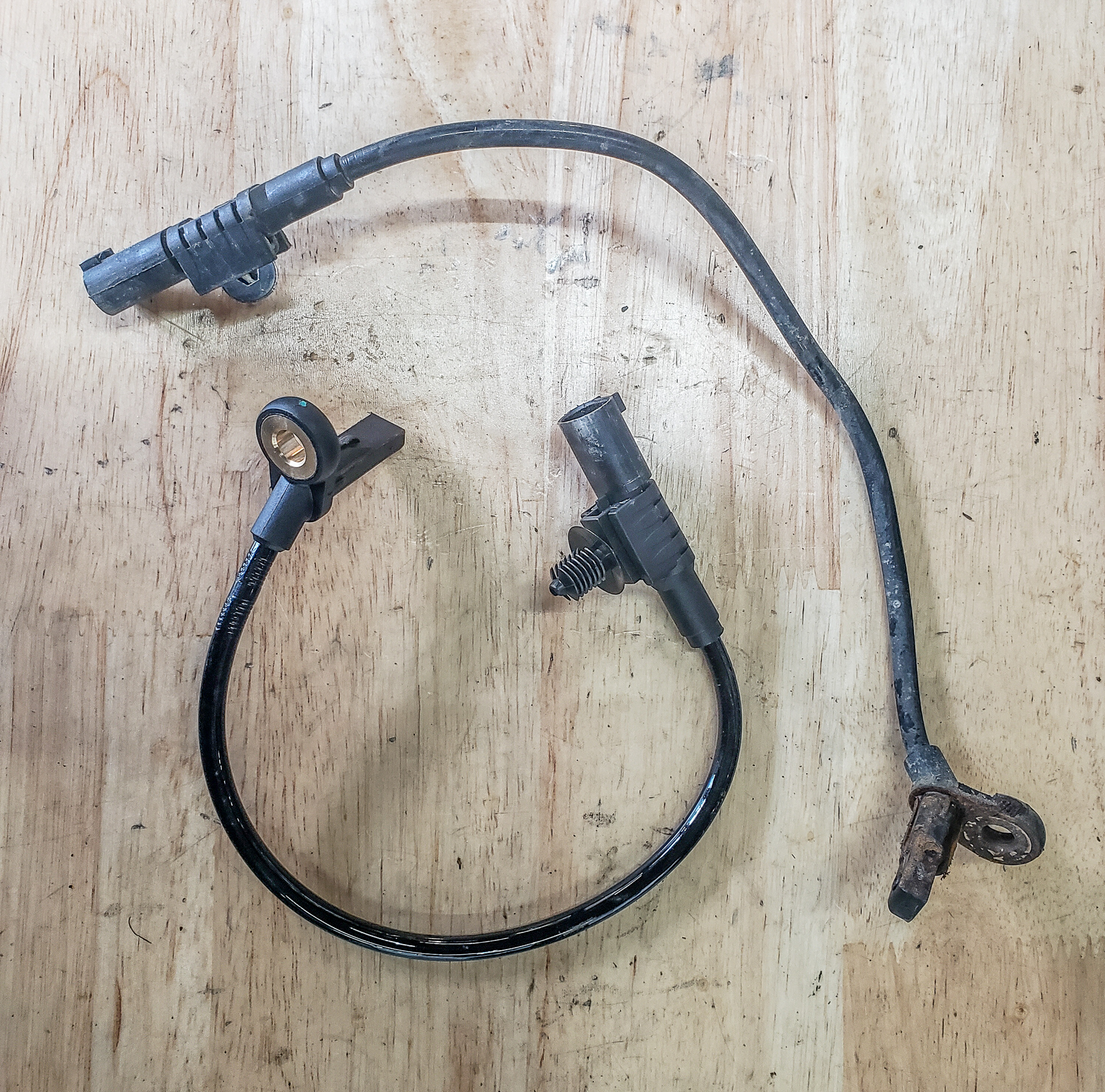 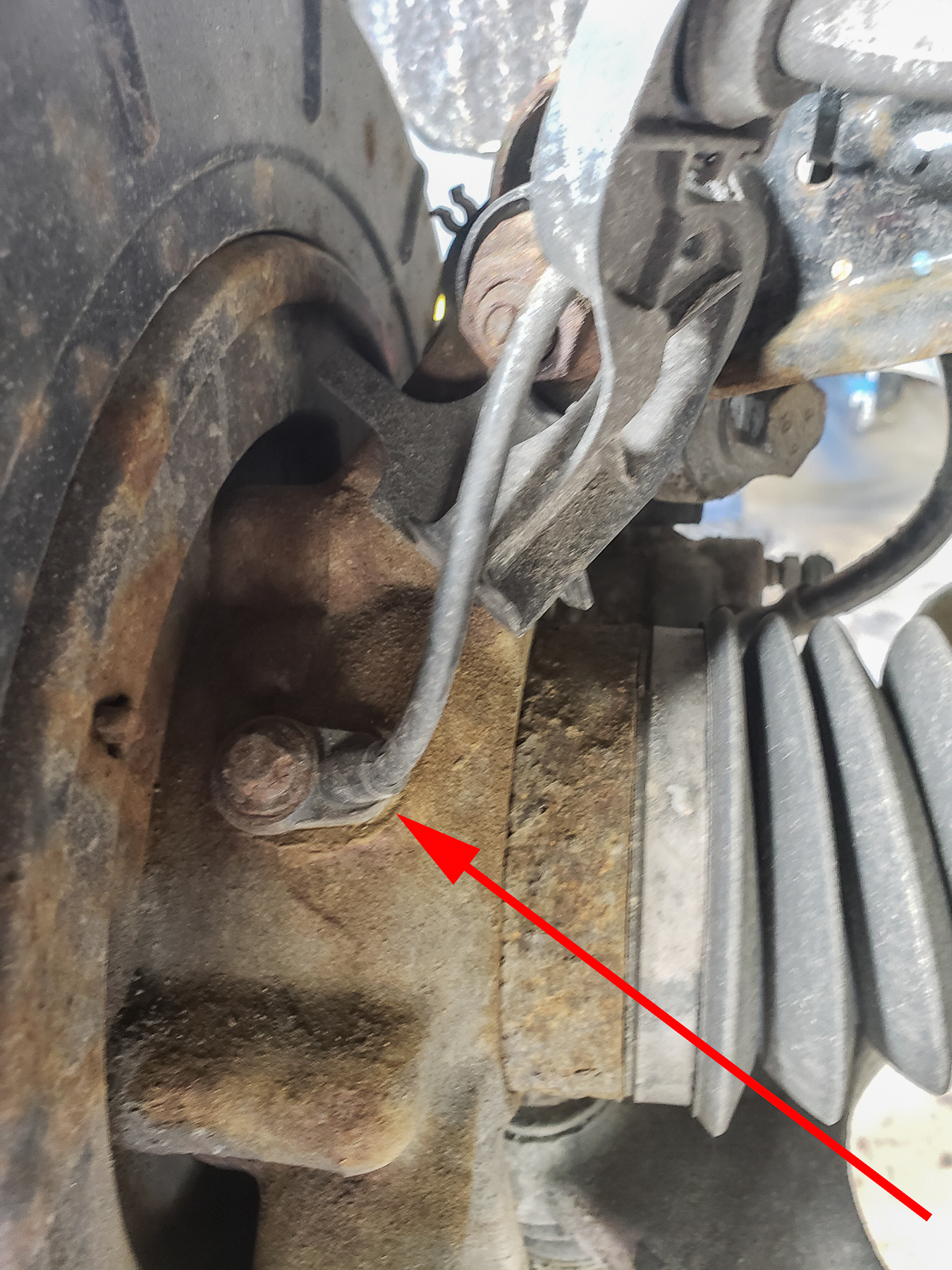 Fortunately, this one was not too difficult to remove and this is the actual speed sensor located bolted up in the wheel hub in the rear. There's the wire. So no, we don't just change the sensor. I mean, sometimes depending on what tests need to be done and depending on the price of the parts, sometimes we'll make the decision with the client. Let's change that piece first. In the case of this, we were able to do some testing on the wiring, resistance tests, and wiggle testing the wiring, and found that we when we would actually be under the vehicle, looking at the scan to a wiggling the wire, you can see the numbers jump around back and forth and normal and resistance test found the sensor was defective.

So there are other things that could have been. You know, there's a wire that runs from the rear of the vehicle to the front. Sometimes those are problematic. Not very often. The computer itself can be bad too. And we found that in other vehicles. So just jumping to the conclusion of let's just change the sensor can often lead to a, without a proper dialogue with the client can often lead to some dissatisfaction. Let's put it that way.

Mark: So, how was it all after replacement?

Bernie: Yeah it was good. Yeah. You know, right away the readings were normal. Everything read 0.7, when you're sitting there, no fluctuations are moving around. And once we drive it down the road, the vehicle ran you know, all the numbers were fine. All the warning lights went out. We cleared all the codes, nothing returned. So all good.

Mark: So the ABS sensor on this at 2008, so it's a 12 year old vehicle. Would it make sense to change any of the other ones or do you wait for them to go bad?

Bernie: We wait for those to go bad. So I think with wheel speed sensors, they're usually replaced as needed type of thing. They do tend to fail kind of on their own. It isn't like if one fails, the rest of them are gonna fail shortly after. And there's really no, other than diagnostically, there's really no advantage to changing the other ones because it's all a separate labor item to replace. It's on a different corner of the car. So there's no labor savings in doing them. And I've found in the past, if you change one, sometimes you won't have a problem for a long time with the others. Good question though.

Mark: So this is a gasoline powered ML350, how's it for reliability, especially compared to the diesels, which we know have a little bit of issues.

Bernie: Yeah. If you want to know about the diesels, of course, we have a many podcasts. I don't know how many, but there's gotta be 10 or 20 on diesel Mercedes, maybe even more. We do a lot of them. There are a lot of issues with the diesel engines, which don't happen with the gasoline engine. So you know, the rest of the vehicle like these ABS sensors are the kind of issue that'll happen on a gas or diesel. Suspension issues happen as well. But I'd say overall, a gasoline vehicle is definitely more reliable than a diesel, with the less expensive problems going wrong. So of course, your fuel, your price to drive it down the road is more expensive because of the fuel, but the diesel is very economical, but when it comes to repairs, the diesel will cost a lot more.

Mark: So there you go. If you're in Vancouver, BC, Canada, the place to go to get your Mercedes fixed is Pawlik Automotive. You can reach them at (604) 327-7112. Website is pawlikautomotive.com. The YouTube channel, Pawlik Auto Repair, hundreds of videos on all makes and models and types of repairs on both of those places. As well, thanks for watching. We really appreciate it. Leave us a review if you're so inclined, and thanks, Bernie.

Bernie: Thank you, Mark. Thanks for watching. We really do appreciate it. It's a pleasure to do this.