Mark: So 2008, it’s getting a little bit older, a Mercedes S63 AMG, pretty fancy car, suspension repair. What was going on with this car?

Bernie: Well the owner came to us, he said he had a problem with his left rear strut, this is an AMG that has the Active Body Control system so it’s a hydraulic and yes there was a problem with the strut, there was some fluid leaking out and the vehicle wasn’t riding too well.

Mark: So are there warning lights that get displayed when that’s taking place?

Mark: Right, so what did you end up replacing?

Bernie: We replaced the left rear strut, but first we did a diagnosis of the system, a quick electronic test and then a visual inspection. We found the left rear hydraulic strut was leaking fluid so we got a replacement unit, put that in and everything works great after that.

Mark: So from our past conversations, different makes of vehicles that have these ABC systems, was this an expensive repair?

Bernie: Yes, it is. I’ll just show a couple pictures here, you can have a look at this this suspension strut, but the answer is yes, it’s fairly, fairly pricey repair. Here’s our AMG S63, beautiful car. There’s, there’s a suspension strut right there, if you look down at the bottom of the strut which is that sort of narrow tube part, it looks a little oily and dark, and that’s where the oil’s been leaking out.  Inside the strut there are seals and valves all hidden behind that accordion piece and within the strut tube. So, is it expensive, the answer is yes it was. To buy this part from the dealer was almost $4,000 which almost blew me off my seat. These are always expensive from the dealer but $4,000 for one strut, if you can imagine having to replace all four that’s $16,000 plus installation labour and taxes; it makes for an incredible pricey job. It’s about $20,000 to do the whole car but we have a source out of the US, they remanufacture these struts, they also do air struts, that’s their specialty and they do a great job, lifetime warrantied and their part is a fraction of the cost of the dealer so it still makes for an expensive repair, much more palatable.

Mark: So, are remanufactured struts available for many of these kind of high tech European cars?

Bernie: They are, they seem to be available for pretty much all of them, this company we deal with has made a specialty of repairing these kind of struts and a lot of air struts, a lot of these vehicles have air suspensions, Mercedes, Land Rovers, of course we talked about a lot and a variety of other European cars use these kind of struts, so yeah they’re available for pretty much everything.

Mark: So any final thoughts on the repair or ABC strut systems in general?

Bernie: Well on the repair side one thing with struts is on a car with conventional type of struts, if one goes on one side you generally replace both on the same axle. But with these electronic systems there’s really no need to do either side if one’s leaking even whether it’s an air strut or hydraulic strut you can just replace each individual component as you go. Certainly when you’re paying 14 or 15 hundred dollars a strut you really don’t want to be putting more in than you have to and it really doesn’t affect the vehicle, once you’ve replaced the part it seems to work just fine, so individual corners you can just do them one at a time. As far as ABC systems they’re awesome. ABC by the way stands for Active Body Control and has many amazing advantages: the car sits level when you go around a corner, the car won’t lean or if there’s some sort of stability issue like one part is diving too much it will actually pump that strut up in a fraction of a second so the car rides well, its smooth, it improves safety in the vehicle as well so when you drive a car that has a system in it. The handling is incredible and to me it’s worth the money if you can afford it.

Mark: So if you’re looking for service on your high-tech fancy Euro saloon or Range Rover or you name it basically the guys to call in Vancouver are Pawlik Automotive. You can reach them to book an appointment at 604-327-7112 or check out their website, there’s tons of information on there about all kinds of repairs of all kinds of vehicles pawlikautomotive.com. Thanks Bernie 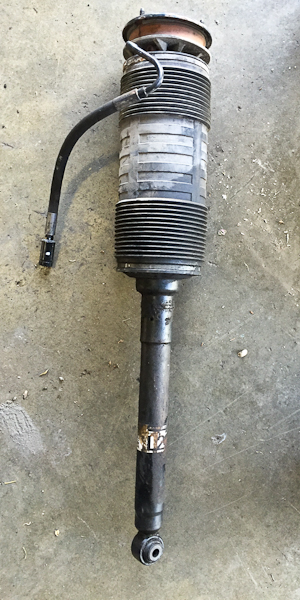