Mark: So today's victim is a 2008 Nissan Pathfinder that had something going on with the heater. What was happening with this Pathfinder?

Mark: So how did you go about determining what was actually going on?

Bernie: Well, we basically take a listen around the heater box to try to figure out. So basically what that noise is, this vehicle, like a lot of modern vehicles uses electronic actuator doors for the various modes of the heating for temperature control, for whether it's blowing, you know, defrost or on your feet or your face or whether it's bringing fresh in from the outside or recirculating air in the vehicle.

So these are blend doors and so they have blend door motors. It was pretty clear that a blend door motor was causing an issue. So we just tested the various controls to determine which blend door would be the issue, and we determined it was the fresh air inlet blend door was causing the problem. So from there it's just a matter of working a cost out with the customer, seeing if they want to go for it, and that's where we went.

Mark: So what was involved in diagnosing exactly which door or which part is bad?

Bernie: You can usually tell by turning an actuator. So if it's say, a temperature door for instance, you can change the temperatures because that'll change the way the door moves for that. So if there's a clicking sort of going on with that, that could be the issue. If you do the fresh air recirculate, again, that changes how things move. So you know, and if something doesn't respond, but it keeps clicking, of course, you know, then something's broken either in the gear or motor.

We'll look at some pictures in a bit and go over some details, but basically operating different controls is usually how you determine it. We can also take some listing equipment, stick our ears underneath, try to hear what area the noise is coming from.

Mark: So is this a high failure item?

Bernie: Well, they do fail quite frequently on, maybe not so much on Nissan, but just across the board on cars. It is an item that does fail from time to time. So certain vehicles, there's higher failures than others. As I've often said with cars, every part will fail at some point in time. It's just whether it's gonna be 5 years, 10 years, 15 or 20 or sometimes never. But yeah, we do replace these from time to.

Mark: So you mentioned some pictures.

Bernie: Yeah. Let's look at some pictures. So you're probably wondering also, you know, what kind of a job is it to replace the blend door motor? And I'll say that some of them are easy, some of 'em are very difficult, and this one was difficult.

This is the view of the dash. Actually, this is when it's all put back together, but the blend door, if you look at where my mouse pointer is kind of swirling around, is located back behind this area here. Behind the glove box airbag area. That's where the fresh air blend door is. 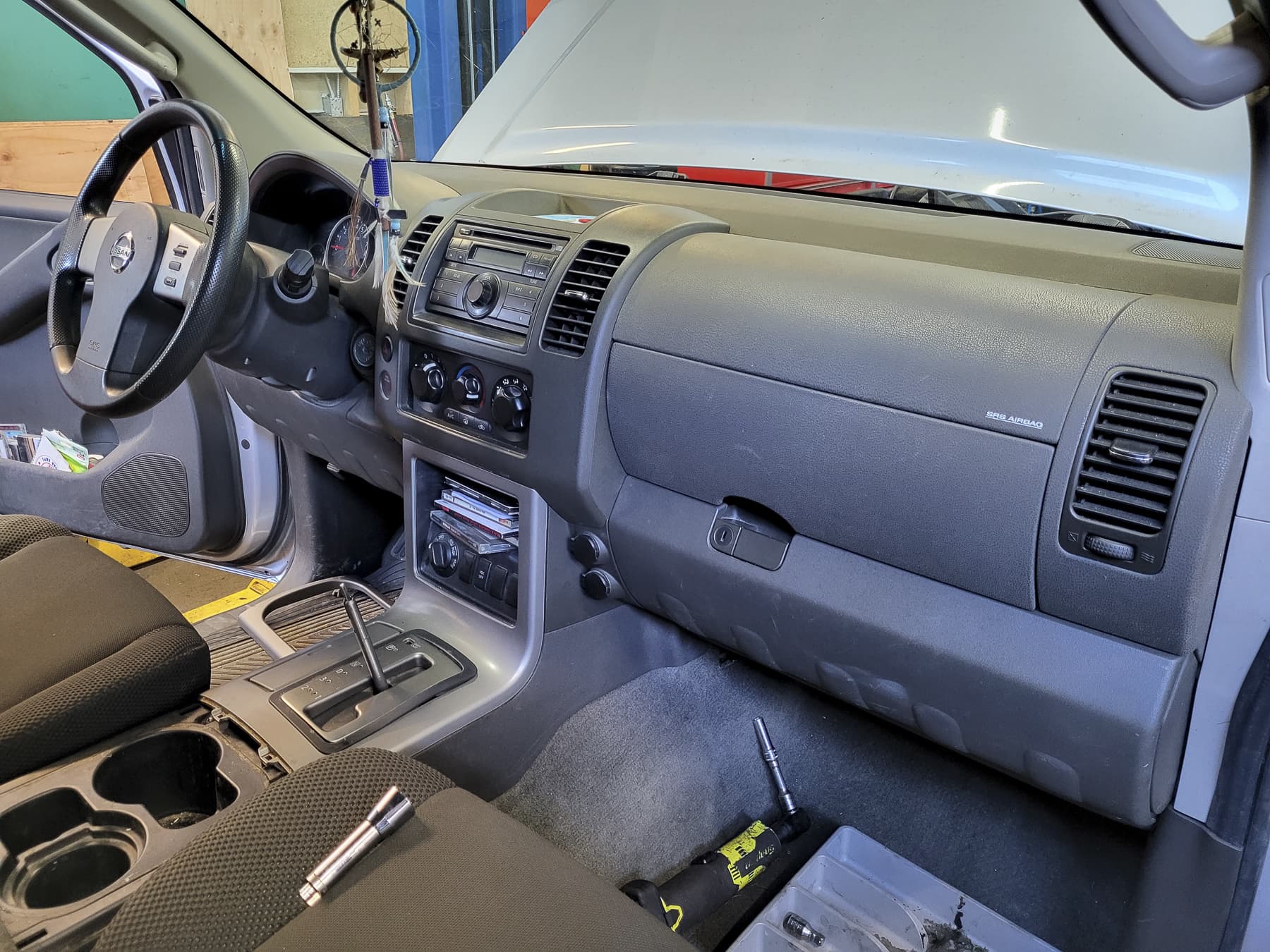 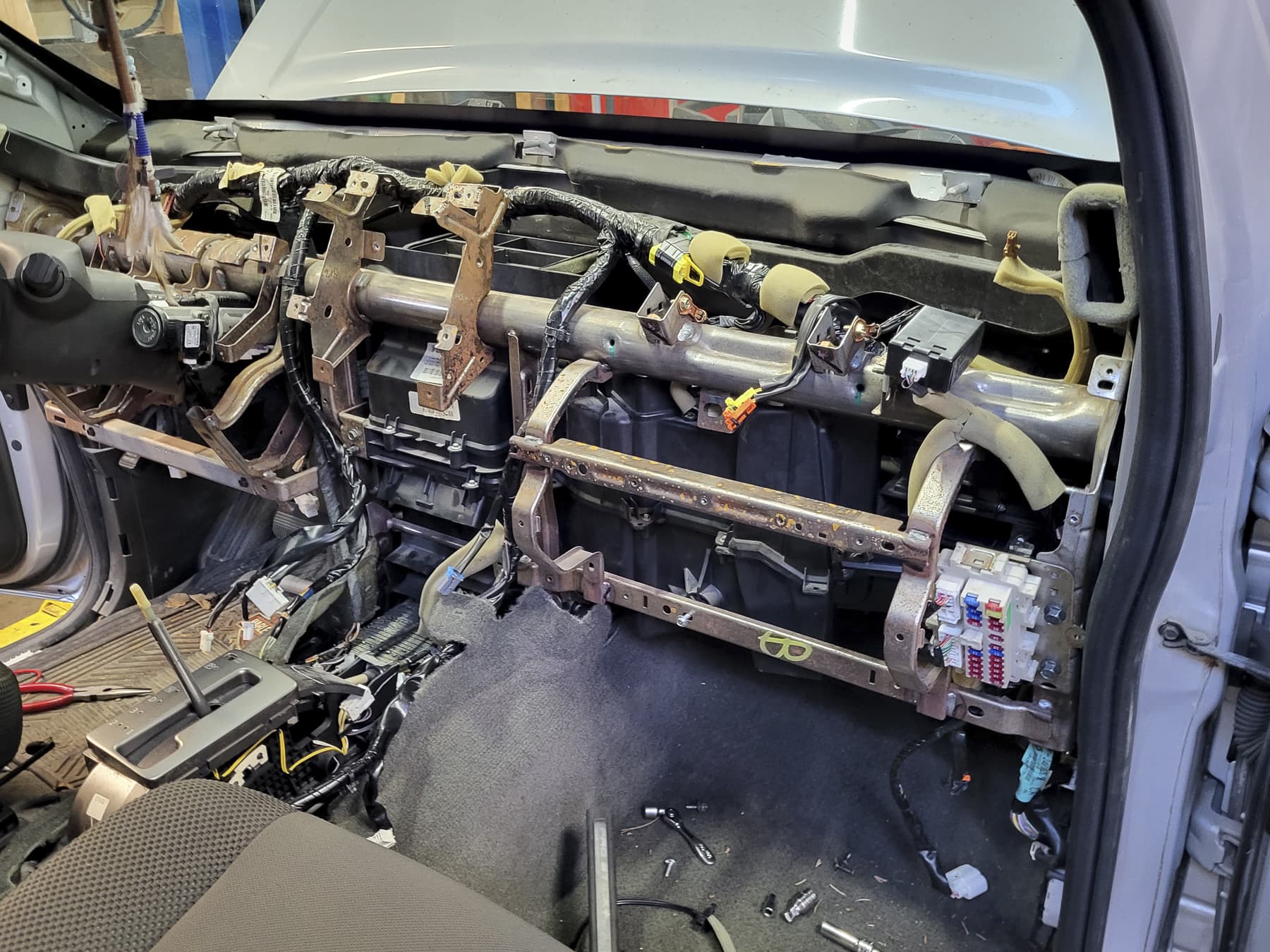 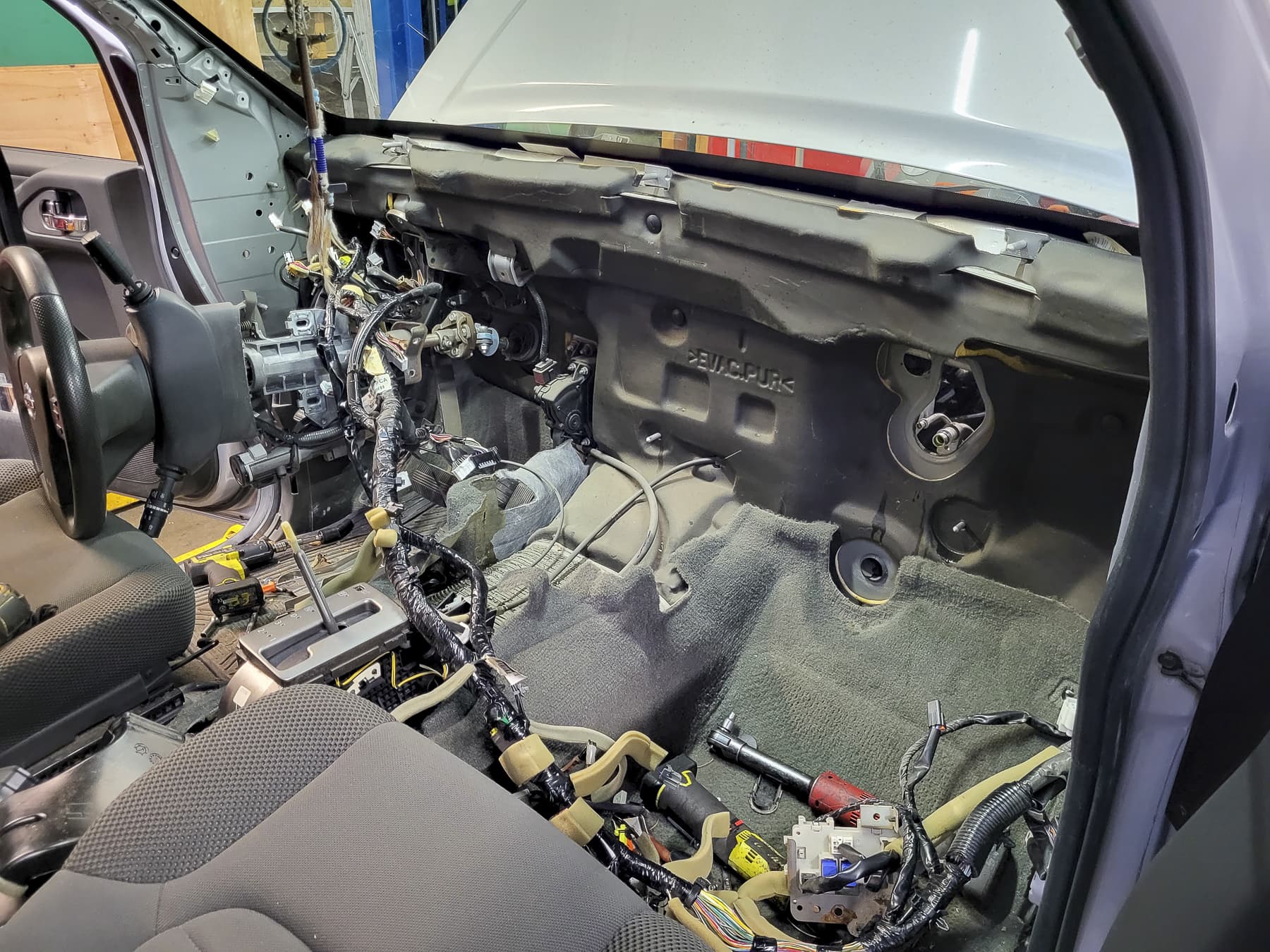 This is a picture of the actual location of the blend door. So this is after we put it in. This is the new motor. Now if you can imagine when I showed you the picture a minute ago, Sort of area where the airbag was. This is located below that and sadly the way they designed this is you actually have to remove the whole heater box to take this motor out. 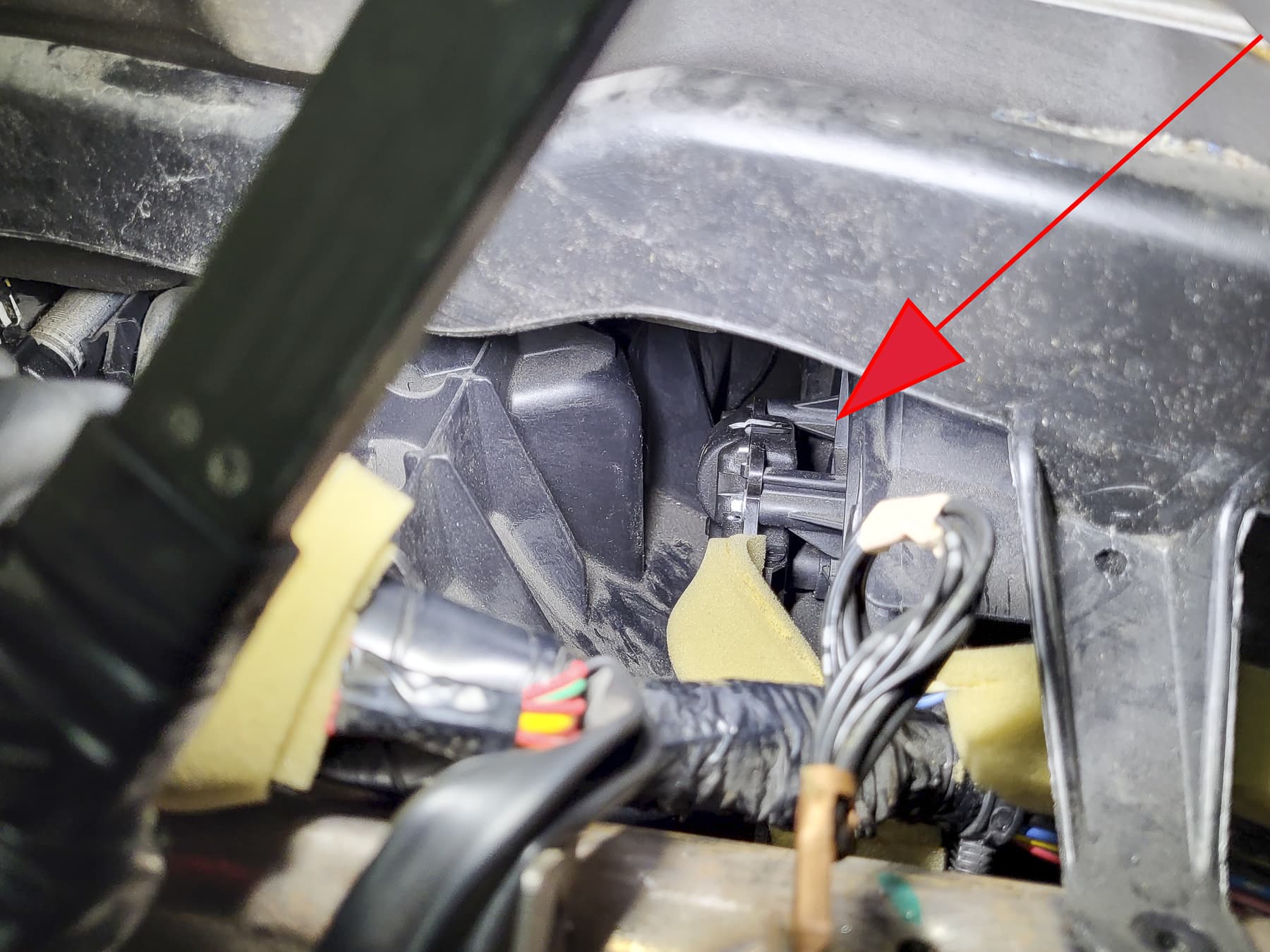 The other motors, there's two others. You can remove those without taking the heater box out. But this one you have to take the heater box out. So unfortunately for the customer, this is the one that was bad, and this is sort of our flashlight looking down here, and buried behind the dash. 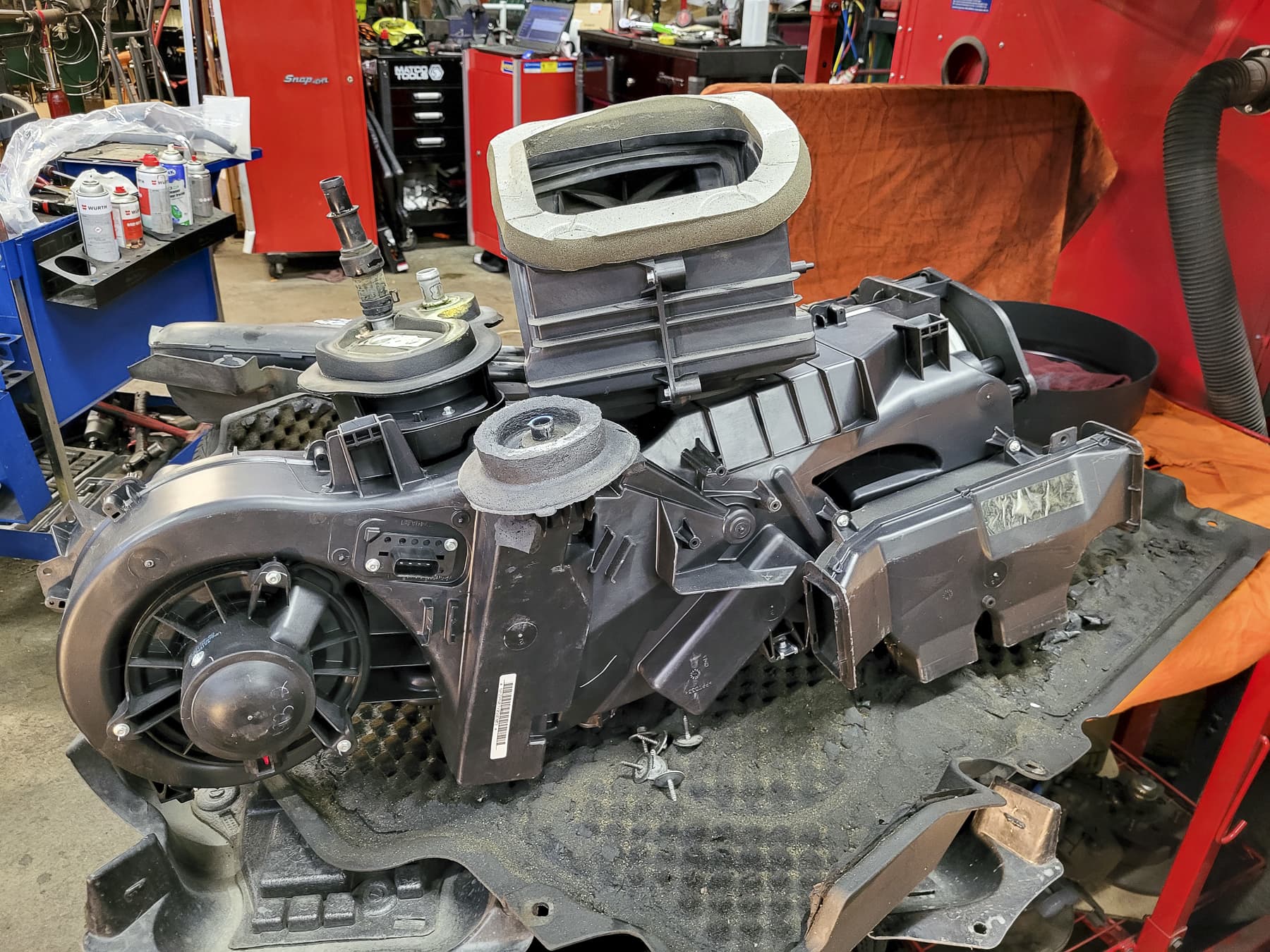 This is a different view. So this is where this box actually bolts up over in this area here where my mouse pointer's moving. 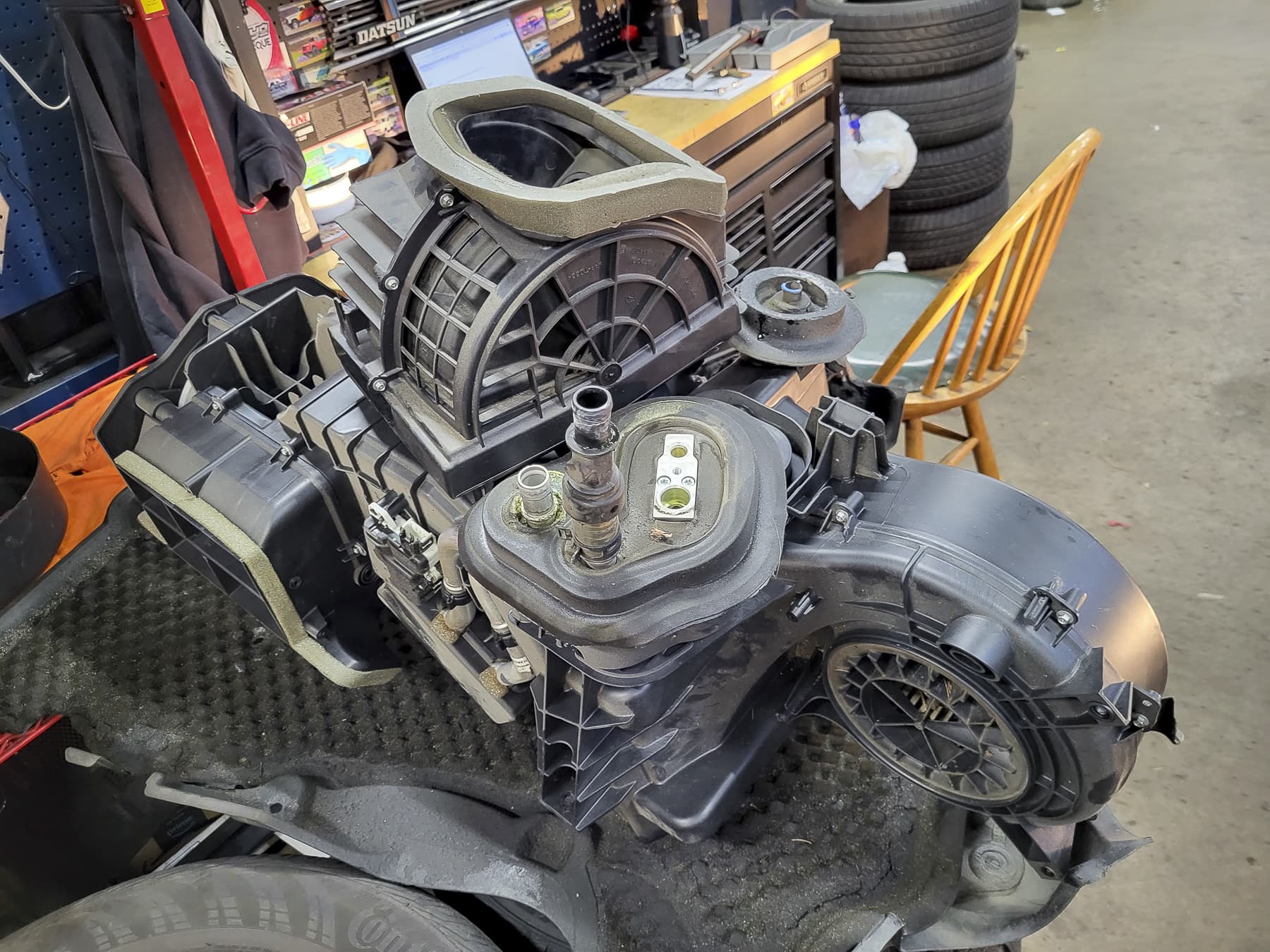 Mark: The round area to the right.

Bernie: The round area to the right. Yeah, exactly. Thanks, Mark. Often assume people are looking at us moving this mouse pointer, but they may not see it. Couple other things to note here. Again, I'm using my mouse pointer here, but sort of more in the centre of the picture. This is where the air conditioning hoses bolt up to the expansion valve and the evaporator core.

These are the pipes for the heating system. So these are the heater pipes. So there's a lot of components that go into these heater boxes. And you know, unfortunately if you need to change any of these, you have to pull the dash apart too, at the same time. Got a couple more pictures.

This is the actuator motor. So this basically, where the red arrows pointing, this part is what clips into the door of the fresh air vent door. 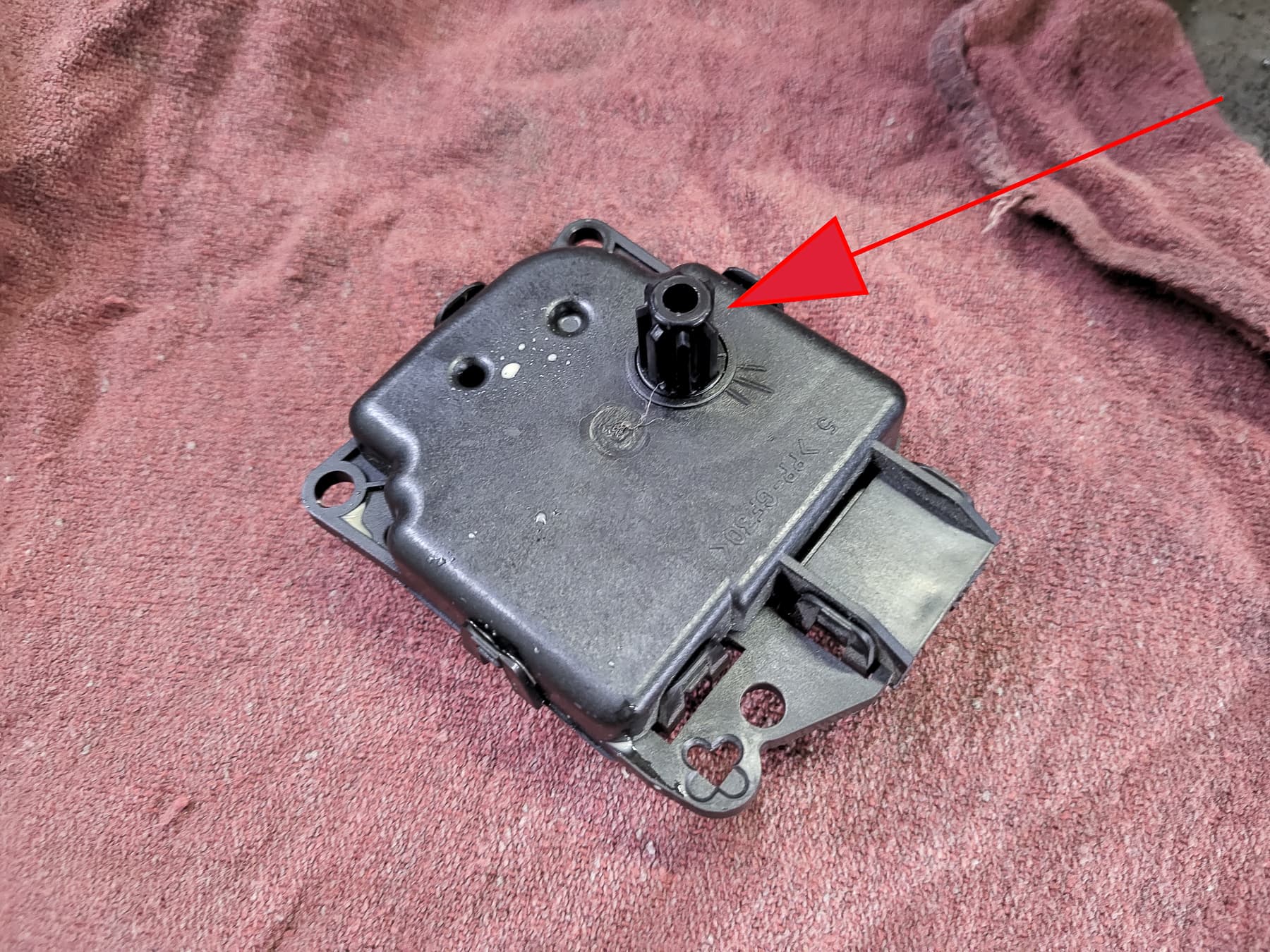 And this is another view of it. This is where the, where the actuator clips in, you can see there's three screw holes for mounting. And of course we test make sure there's nothing broken in the, in the flap. This turns a big flap back and forth. 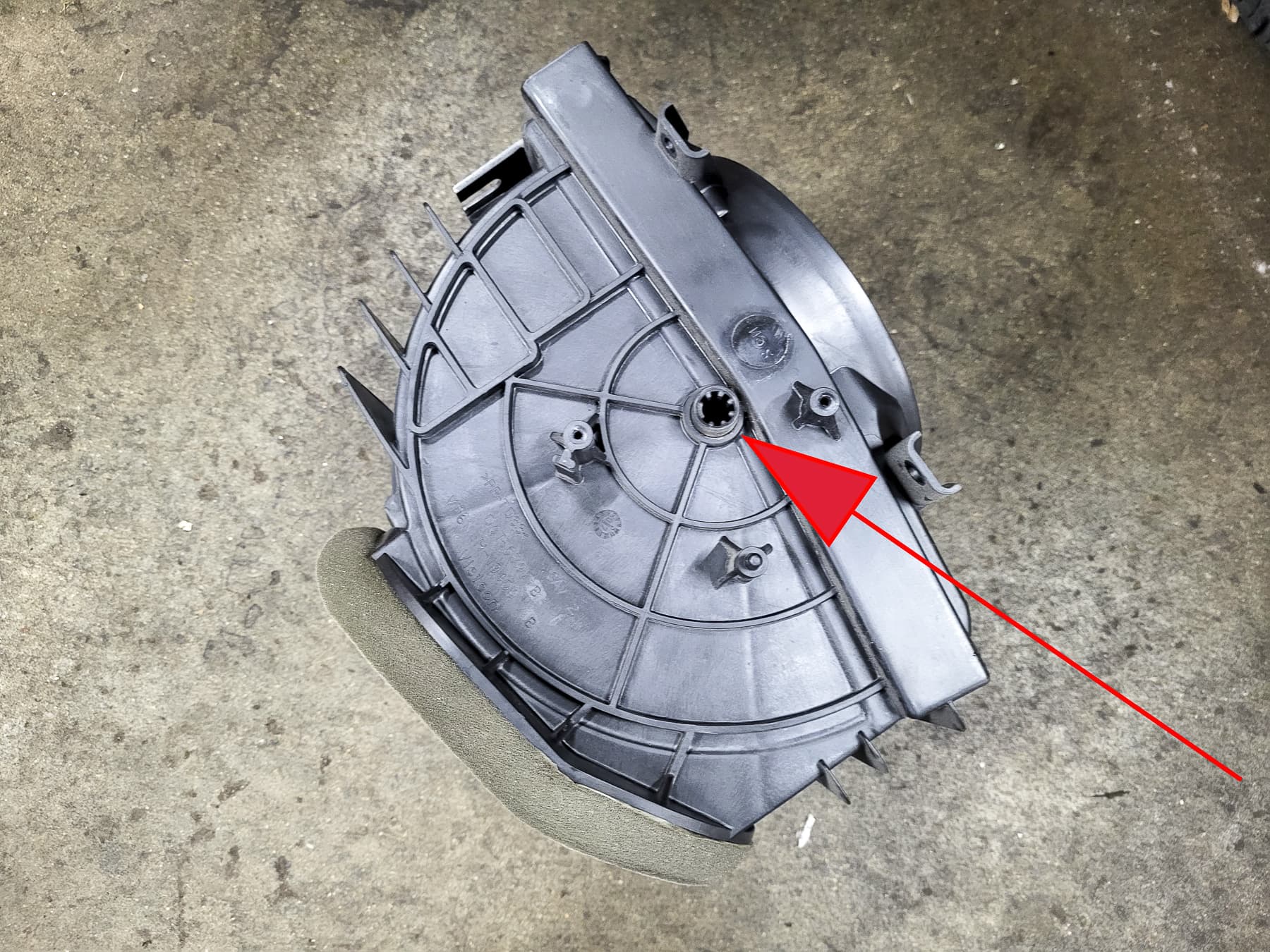 The backside view of the motor. And this is the actual motor itself. There's gears inside and sensors you know, that sense the position of the motor as well. And I believe that is it. 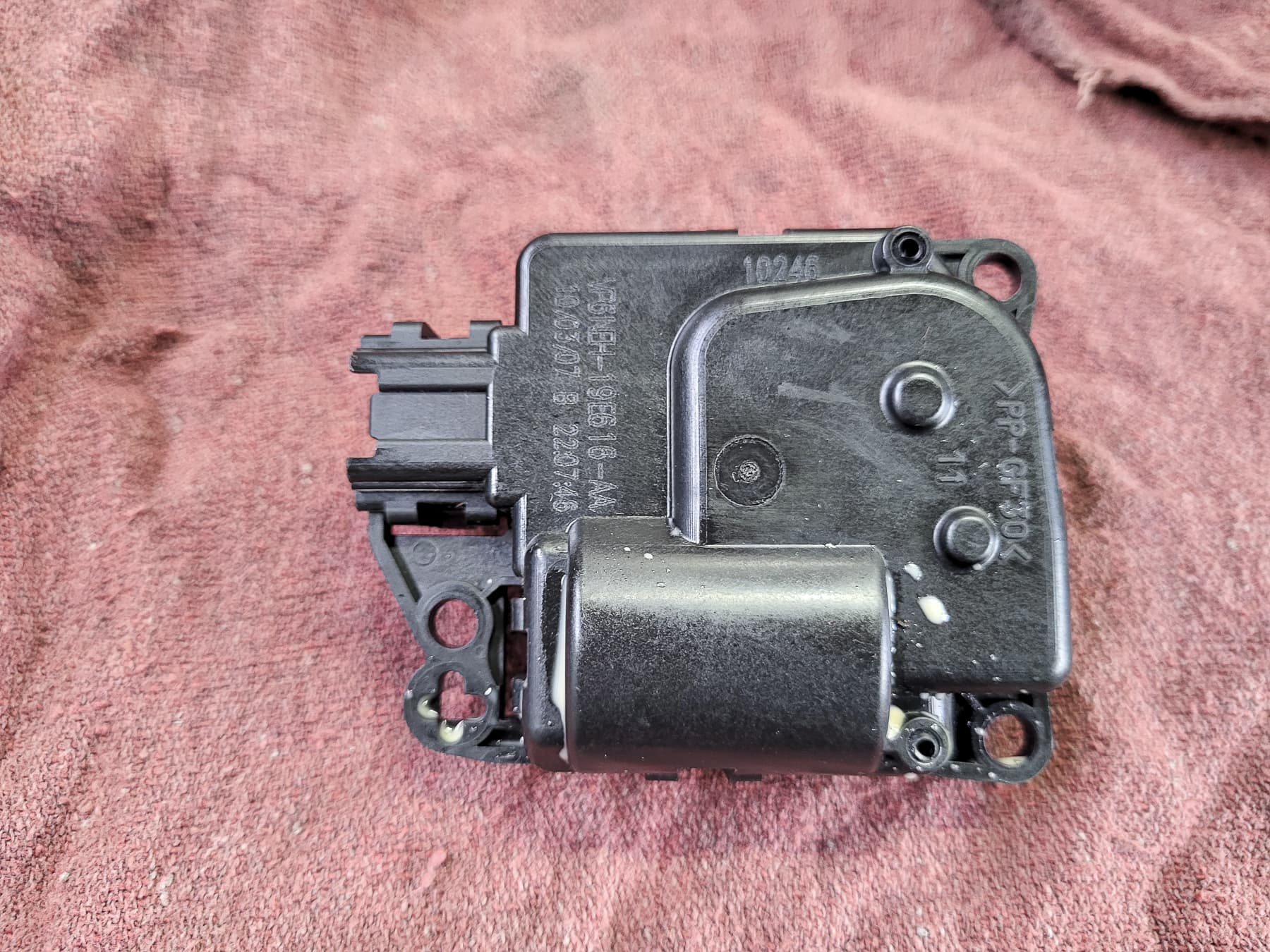 Mark: So obviously, given the amount of work that had to be done, was a bit of an expensive of a repair.

Bernie: Yeah. The motors are not expensive, it's a very labour intensive repair. And as I said, unfortunately for the owner of the vehicle, this was of all the motors that could have gone bad, this one was the worst.

Mark: So were there any other items that you replaced while you had everything out of the vehicle?

Bernie: No that was it. Of course we had to evacuate the air conditioning system and I'm not certain if we put new coolant in or just saved the old coolant, but you know, just sort of fluids and doing the air conditioning, evacuate and recharge. But other than that, we didn't do anything else. I mean, everything else looked to be in pretty good order and the heater cores and, you know, air conditioning evaporators, we found are pretty reliable on Pathfinders.

So, you know, there's certain vehicles where we might go, you know what, those fail frequently, we should change it while it's out. But in this case we just did the one actuator motor.

Mark: This seems like an incredibly complex system just to heat and cool and move air around in the car. Are actuator motors just common to all vehicles?

Bernie: They're pretty common to all vehicle. Well, they would be common to EVs as well because they have a heating system that they need to move air around to different parts of the car as well. So yeah, they're common on any vehicle nowadays. I mean, this used to all be done with rods and cables. Long gone are those days.

You know, the actuator motors work better. I mean, they started on luxury cars and now they use 'em on everything. But it does add complexity. It wasn't like we wouldn't have replaced cables and things in the past. I mean, those things wore out too, but it usually was a lot less complex than these actuators.

They make everything more complex. Everything has air conditioning nowadays. And so you have to blend everything. And now it's like two zone, a lot of vehicles have heating, one side or the other, and we all like these conveniences and there's a price to be paid for it, when the repair time comes.

Mark: Yeah. So how often are actuator motors a problem? How often do you replace.

Bernie: You know, we don't do them a lot. I think we talked about this a little earlier. We don't do them a lot, but I mean, every different vehicle, they do fail from time to time. It's a part that you may need to replace in your vehicle at some point. So this Pathfinder 2008, we're 2022 right now. So that's 14 years. Pretty good. Yeah, it's pretty decent life.

Mark: Are they all this difficult to replace?

Bernie: No, they're not. Some of 'em you can climb under the dash and maybe it's an hour or two to change it. This is like, as you can imagine, many hours to take everything, it's like a day's work to take it all apart, put it back together. Some of 'em are this complicated and others are not. It's too bad they don't think about these things when they build a car.

But if you thought about everything needing to be fixed, it would just add so much complexity to making the car. I often wonder why do they make it so complicated to fix? But the answer is you can't think of everything you're gonna have to replace.

Mark: How are these Nissan Pathfinders for reliability?

Bernie: Yeah, they're really good vehicles. They've been around for a long time. They've been a good, reliable vehicle. Often think 'em as sort of competition for a Toyota 4Runner. Toyota 4runner is a little heavier duty. You know, they're more expensive and probably more reliable too. But Pathfinders, they're a good vehicle.

Mark: If you're looking for service for your Pathfinder or you've got a heater door that's clicking and driving you nuts, the guys to call in Vancouver, are Pawlik Automotive. You can book online on their website, pawlikautomotive.com or phone (604) 327-7112. Remember, 24 time winners Best Auto Repair in Vancouver as voted by their customers. Thanks for watching. We appreciate it. Thanks, Bernie.